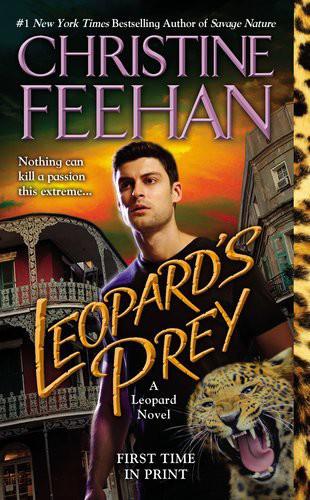 ‘After Bram Stoker, Anne Rice and Joss Whedon, Feehan is the person most credited with popularizing the neck gripper’

‘The queen of paranormal romance’

‘Feehan has a knack for bringing vampiric Carpathians to vivid, virile life in her Dark Carpathian novels’

New York Times
bestselling author Christine Feehan has had over thirty novels published and has thrilled legions of fans with her seductive Dark Carpathian tales. She has received numerous honours throughout her career, including being a nominee for the Romance Writers of America RITA and receiving a Career Achievement Award from
Romantic Times
, and has been published in multiple languages and in many formats, including audio book, ebook and large print.

Lair of the Lion

For Erin Galloway, with love

Be sure to go to
http://www.christinefeehan.com/members/
to sign up for my PRIVATE book announcement list and download the FREE ebook of
Dark Desserts
, a collection of wonderful desserts sent in by readers all over the world. Join my community and get firsthand news, enter the book discussions, ask your questions and chat with me. Please feel free to email me at [email protected] I would love to hear from you.

As always when writing a book, I have several people to thank. Melisa Long, for information on the bayou and the Cajun people. Thanks so much for taking the time to talk with me. Brian Feehan, who always drops everything to work out tough fight scenes and discuss difficult scenarios and give me pep talks when I need them most. Domini, as always, you make the book so much better! I appreciate you all so much!

The bayou was no place for the faint of heart – especially at night. Alligators, snakes, even the occasional large cat preyed upon the unwary. Strange lights and mysterious sightings of everything from ghosts to vengeful creatures haunted the bayou at night. It was easy to get turned around, to get lost in the endless sea of grasses and the mist-covered cypress trees. One misstep and a man could sink below the ground and never find his way to the surface.

Remy Boudreaux loved the bayou. Night. Day. It didn’t matter. It was home, and it always would be. He loved the superstitions, the healers and the magic. The food. The swamps. Even the damn alligators. He loved the sultry heat and the golden sunset pouring into the water.

There was New Orleans. A city he was proud of. No matter how many times nature – or man – slammed it, the city rose over and over, each time better and stronger. It was his city. His bayou. His swamp. And his people.

The people in the bayous and swamps went about their business every day without asking for a handout. They fished and hunted, shrimped and pulled in crabs for their families. If there was trouble, they preferred to handle it on their own. They carved out lives for themselves and their families in mosquito-infested swamps and waterways. They didn’t ask permission or give apologies. They lived life as it came and they lived it large. Most had big noisy families, and celebrated every chance they got. They were your best friend or your worst nightmare, quick to anger and just as quick to give you the shirt off their backs.

Remy had traveled all over the world and he’d come back time and again to the bayou – and to his people. He loved each of them as fiercely and as passionately as only a Cajun could – or a leopard protecting its lair. What he didn’t love was murder. These were his people and no one was going to come into his world, take lives and get away with it.

Remy was a big man, tall, broad-shouldered with the signature heavy roped muscles of his kind. His hair was a bit shaggy, and midnight black. His eyes were either a striking cobalt blue or, if the situation called for it, glacier blue. Unless his cat was close, and then his gaze went watchful, serious, focused and very green. His face was tough, strong jawed, the lines carved deep. He had a serious shadow going nearly all the time, and the scar running down the side of his neck could have been from a knife – or a claw.

Remy Boudreaux was not a man anyone crossed. He was as Cajun as they came, born and raised in the bayou. He was more animal than man, the instincts of his leopard aiding him as a homicide detective. He had a reputation, well deserved, as a man not to trifle with. He took murder in his city or his bayou or swamp personally.

There was little moon and the water appeared black and shiny as the airboat skimmed over it. Tall grassy reeds rose in columns on either side of them, forming a narrow canal. The grasses were thick and impenetrable, making it impossible to see over, around or through them. Gage, Remy’s brother, handled the airboat easily, guiding it through the treacherous waters without hesitation.

“You sure about this, Gage? The same killer? When we are absolutely certain, we are going to have to inform the FBI,” Remy said. His gut already gave him the answer. Gage didn’t make mistakes, not when it came to murder.

Gage Boudreaux was sheriff of the parish. He and his men were responsible for bayous as well as the outlying areas. Right now, he was running the airboat with a grim look on his face. He felt exactly the same way about murder as Remy did.

“The body was found at one of the camps on the edge of the swamp, on the other side of Fenton’s Marsh.”

Remy swore under his breath. “Saria found the body, didn’t she? She’s still creepin’ around the swamp at night taking photographs. I was hopin’ Drake would get that girl under control.”

Gage snorted. “Our sister has never been under anyone’s control, Remy, and you know it. Her husband is wrapped around her little finger. He’s no help. In any case, she knew better than to disturb a crime scene. She took pictures just in case someone or something came along when she went for help.”

“There’s no cell phone service out in the swamp. She has no business out there without backup. Anythin’ could happen. And this is not the first dead body she’s discovered out there. You’d think Drake would have enough sense to know she isn’t safe alone in the swamp at night,” Remy snapped.

Sometimes his much younger sister made him crazy. She was a law unto herself, and she had been since she was a toddler. Their drunken father forgot her half the time and most of the boys were off doing their own thing, so she ran wild – and was still running wild even married to a man like Drake Donovan, who was certainly no pushover around anyone but her.

Saria had no problem going into the swamp at night for her photography. Granted, she made a lot of money on her photos and her reputation as a wildlife photographer was growing, but the things she did were dangerous and she had to stop. That was all there was to it.

“Whoa, bro,” Gage said. “I see the storm clouds gatherin’. Gettin’ into it with Saria is useless. You’d be talkin’ to the wind. She’d go all silent, nod her head as if she understood completely and then she’d just do whatever the hell she wanted to do.” Gage shrugged. “Although, if she listens to anyone, it’s you.”

“I wasn’t plannin’ on confrontin’ Saria,” Remy stated. He had long ago given up confronting her directly unless the circumstances were dire. She always seemed to know if he was willing to back up his threat with action or not. Locking her up was the only – and extremely dangerous – solution. Saria tended to retaliate as any self-respecting leopard would.

He didn’t want any more details on the crime scene. He liked to make his own first impressions, so he didn’t want to talk about what Saria found in the swamp. The serial killer from four years earlier had hit New Orleans hard, leaving behind four dead bodies over a period of two months, and then he was gone. If this was the same killer, Remy feared this wouldn’t be the only body found, and no one would be safe until he was caught. The swamps and bayous were lonely and took in a lot of territory. The killer would have a big playing field.

Remy was Cajun, born and raised, but he was also leopard – a shifter. A small clan of leopards had made their homes along the bayous. He didn’t just take the form of a big cat – he was leopard with all the traits of a beast. The wildness in him was always close to the surface. Passion ran just as hot as tempers. Jealousy and fury were every bit as strong as love and loyalty. There was no way to fully submerge their animal natures. They lived by a different set of rules and answered to their lair leader – Drake Donovan. Theirs was a ruthless, brutal set of laws, but necessary to keep their people under control. Some married leopards, others married outsiders who usually had no idea and never would. It was necessary to keep their ability to shift absolutely secret – even from family who were unable to shift.