Read Letters to the Lost Online

Letters to the Lost 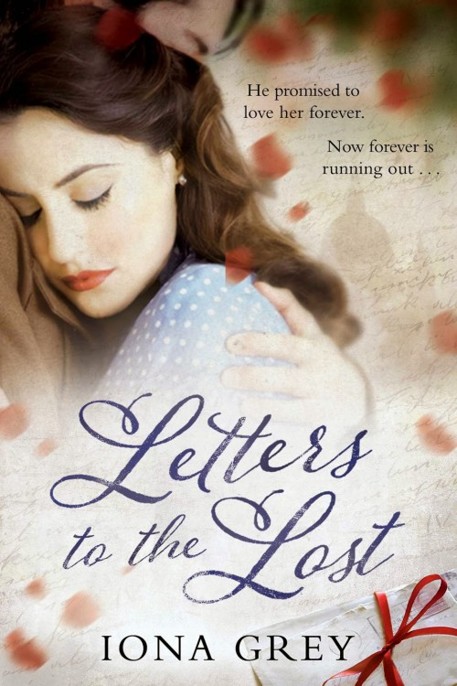 Iona Grey has a degree in English Literature and Language from Manchester University, an obsession with history and an enduring fascination with the lives of women in the twentieth century. She lives in rural Cheshire with her husband and three daughters. She tweets @iona_grey

Praise for
Letters to the Lost
:

‘A beautiful, tender story from a naturally gifted storyteller. A wonderful debut novel and a real weepy!’

‘I fell completely in love with this novel.
Letters to the Lost
is extraordinary – vivid, compelling and beautifully told. It will stay with me for a long time’

‘A beautifully woven tale of love and loss that breaks your heart and rebuilds it. I couldn’t put it down. It was a big juicy read that reminded me of books that I loved in the past that wrapped you up, held you tight and didn’t put you down until you were left devastated that the book had ended yet totally satisfied’

‘A warm, compelling and beautifully crafted love story,
Letters to the Lost
is elegantly written and extremely well-researched, and the wonderfully satisfying ending made me sob’

‘This novel is Romantic with a capital ‘R’, a story to lose yourself in. It sweeps you up into the lives of its characters and makes you hope that sometimes lost loves can be found’

‘
Letters to the Lost
pulsates with life, offering a vibrant love story that transcends time and the heartbreak of war. Settle in somewhere comfortable; you are in for an enthralling read’

‘
Letters to the Lost
is a powerful debut, one of those rare books that grabs you from the first page and doesn’t let go. A heart-wrenching, smile-through-the-tears story of love lost and re-found – you won’t be able to put it down’

The right of Iona Grey to be identified as author of this work has been asserted in accordance with sections 77 and 78 of the Copyright, Designs and Patents Act, 1988.

An Interview with Iona Grey

The house is at its most beautiful in the mornings.

He designed it to be that way, with wide, wide windows which stretch from floor to ceiling, to bring in the sand and the ocean and the wide, wide sky. In the mornings the beach is empty and clean, a page on which the day is yet to be written. And the sunrise over the Atlantic is a daily miracle he always feels honoured to witness.

He never forgets how different it could have been.

There are no curtains in the house, nothing to shut out the view. The walls are white and they take on the tint of the light; pearly pale, or pink as the inside of a seashell, or the rich, warm gold of maple syrup. He sleeps little these days and mostly he is awake to see the slow spread of dawn on the horizon. Sometimes he comes to suddenly, feeling that familiar touch on his shoulder.

A circle is closing. The finger tracing it on the misted glass is slowly coming around to the top again, to the point where it all began. The memories are with him almost constantly now, their colours fresh, voices vivid. Dawns of long ago. The smell of oil and hot metal. The plaintive, primitive thrum of engines on the flight line and a red ribbon on a map.

Today gentlemen, your target is . . .

It is such a long time ago. Almost a lifetime. It is the past, but it doesn’t feel like it’s over. The ribbon is stretching across the ocean outside his window, beyond the distant horizon, to England.

The letter lies amid the bottles of pills and sterile needle packs on the nightstand beside him, its familiar address as evocative as a poem. A love song. He has waited too long to write it. For years he has tried to reconcile himself to how things are and to forget how they should have been, but as the days dwindle and the strength ebbs out of him he sees that this is impossible.

The things that are left behind are the things that matter, like rocks exposed by the retreating tide. And so he has written, and now he is impatient for the letter to begin its journey, into the past.

It was a nice part of London. Respectable. Affluent. The shops that lined the street in the villagey centre were closed and shuttered but you could tell they were posh, and there were restaurants – so many restaurants – their windows lit up like wide-screen TVs showing the people inside. People who were too well-mannered to turn and gawp at the girl running past on the street outside.

Not running for fitness, wearing lycra and headphones and a focused expression, but messily, desperately, with her short skirt riding up to her knickers and her unshod feet splashing through the greasy puddles on the pavement. She’d kicked off her stupid shoes as she left the pub, knowing she wouldn’t get far wearing them. Platform stilettos; the twenty-first-century equivalent of a ball and chain.

At the corner she hesitated, chest heaving. Across the road was a row of shops with an alleyway at the side; behind, the pounding echo of feet. She ran again, seeking out the dark. There was a backyard with bins. A security light exploded above her, glittering on broken glass and ragged bushes beyond a high wooden gate. She let herself through, wincing and whimpering as the ground beneath her feet changed from hard tarmac to oozing earth that seeped through her sodden tights. Up ahead there was the glimmer of a streetlight. It gave her something to head towards; she pushed aside branches and emerged into a narrow lane.

It was flanked on one side by garages and the backs of houses, and by a row of plain terraced cottages on the other. She swung round, her heart battering against her ribs. If he followed her down here there would be nowhere to hide. No one to see. The windows of the houses glowed behind closed curtains, like slumbering eyes. Briefly she considered knocking on the door of one of the small cottages and throwing herself on the mercy of the people inside, but realizing how she must look in her clinging dress and stage make-up she dismissed the idea and stumbled on.

The last house in the little terrace was in darkness. As she got closer she could see that its front garden was overgrown and neglected, with weeds growing halfway up the peeling front door and a forest of shrubbery encroaching upon it from the side. The windows were blank and black. They swallowed up her reflection in their filth-furred glass.

She heard it again, the beat of running feet, coming closer. What if he’d got the others to look for her too? What if they came from the opposite direction, surrounding her and leaving no escape? For a moment she froze, and then adrenaline squirted, hot and stinging, galvanizing her into movement. With nowhere else to go she slipped along the side of the end house, between the wall and the tangle of foliage. Panic made her push forward, tripping over branches, gagging on the feral, unfamiliar stink. Something shot out from beneath the hedge at her feet, so close that she felt rough fur brush briefly against her shin. Recoiling, she tripped. Her ankle was wrenched round and a hot shaft of pain shot up her leg.

She sat on the damp ground and gripped her ankle hard, as if she could squash the pain back in to where it had come from. Tears sprang to her eyes, but at that moment she heard footsteps and a single angry shout from the front of the house. She clenched her teeth, picturing Dodge beneath the streetlamp, hands on his hips as he swung around searching for her, his face wearing that particular belligerent expression – jaw jutting, eyes narrowed – that it did when he was thwarted.

Holding her breath she strained to listen. The seconds stretched and quivered with tension, until at last she picked up the sound of his receding feet. The air rushed from her lungs and she collapsed forward, limp with relief.

The money crackled inside her pocket. Fifty pounds – she’d only taken her share, not what was due to the rest of the band, but he wouldn’t like it: he made the bookings, he took the money. She slid a hand into her pocket to touch the waxy, well-used notes, and a tiny ember of triumph glowed in her heart.

She’d never broken into a house before. It was surprisingly easy.

The hardest part was crawling through the hedge, and beating through thorny ropes of brambles and spires of stinging nettles in the garden as her ankle throbbed and burned. The glass in the back door was as brittle and easy to break as the crust of ice on top of a puddle, and the key was still in the lock on the other side.

The kitchen was small, low-ceilinged. It smelled musty, as if it had been shut up for a long time. She turned around slowly, her eyes raking the gloom for signs of life. The plant on the windowsill had shrivelled to a twist of dry leaves set in shrunken soil but there was a kettle on the gas stove and cups hanging from a row of hooks beneath the shelf on the wall, as if the occupant might come in at any moment to make a cup of tea. She shuddered, the hairs on the back of her neck rising.

She spoke loudly, with a confidence she didn’t feel. Her voice sounded peculiar; flat and almost comically Northern. ‘Hello – is anyone there?’

The quiet engulfed her. In a sudden flash of inspiration she fumbled to find the pocket of her jacket and pulled out a cheap plastic lighter. The circle of gold cast by the flame was small, but enough to show cream tiled walls, a calendar bearing a picture of a castle above the date July 2009, a kind-of vintage cupboard unit with glass-fronted doors at the top. She moved forward awkwardly, reaching out to support herself on the doorframe as pain sank its teeth deeper into her leg. In the next room the glow of the tiny flame outlined a table by the window and a sideboard on which china ladies curtseyed and pirouetted to an invisible audience. The stairs rose from a narrow passageway. She paused at the foot of them. Staring up into the darkness she spoke again, softly this time, as if calling to a friend.

Silence greeted her, and the faintest breath of some old-fashioned perfume drifted down, as if she’d disturbed air that had been still for a long time. She should go up to check that there was no one there, but her aching ankle and the sense of absolute stillness deterred her.

In the room at the front she let the flame go out, not wanting to risk its glow being spotted from outside. Drooping curtains were half pulled across the window, but the light from the streetlamp filtering through the gap was enough to show a sagging and lumpy settee pushed against one wall, with a blanket made up of crocheted squares in clashing colours covering its back. Cautiously she peered out, looking for Dodge, but the pool of light around the streetlamp was still and unbroken. She sagged against an armchair and breathed a little easier.