Read Light in the Barren Lands: Travail of The Dark Mage Book One Online

Light in the Barren Lands: Travail of The Dark Mage Book One 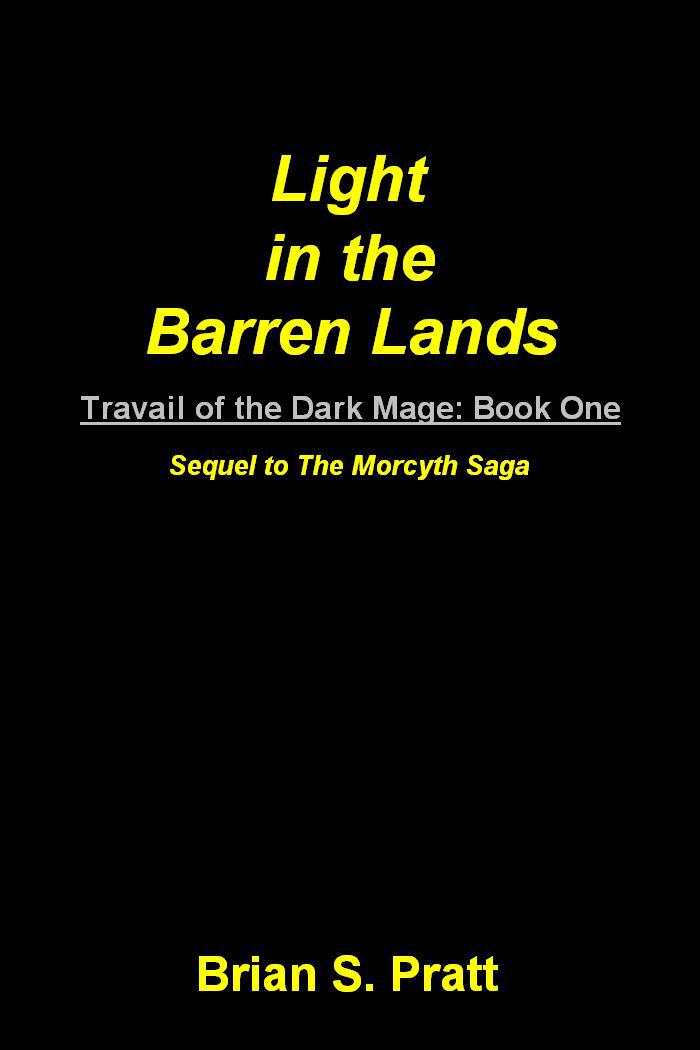 Light in the Barren Lands

All rights reserved. No part of this book may be used or reproduced by any means, graphic, electronic, or mechanical including photocopying, recording, taping, or by any information storage retrieval system without the written permission of the publisher except in the case of brief quotations embodied in critical articles or reviews.

Books written by Brian S. Pratt can be obtained either through the author’s official website:

or through select, online book retailers.

The Morcyth Saga
The Unsuspecting Mage

Trail of the Gods

The Star of Morcyth

Shades of the Past

The Mists of Sorrow*

*(Conclusion of The Morcyth Saga)

Light in the Barren Lands

#2-Hunter of the Horde

This is for
Geoffrey Verdegast
, author of the fantasy book

Of Staves and Sigmas.

Thanks for the help!

Be sure and check out a review by

Of Staves and Sigmas
following
Light in the Barren Lands

He always enjoyed coming to Cardri, capital city of the kingdom of Cardri. A grin still played across his face whenever he thought of the misunderstandings that might arise from the simple fact that the city’s name was the same as the kingdom. So if one were to say, “I’m on my way to Cardri”, it could be construed as either being headed for the town, or the kingdom. Though for the most part, the point would be moot. For should a person find himself already within the kingdom, Cardri would of course be referring to the city. And if without, the kingdom.

Shaking his head, he put aside such amusing thoughts as he scanned the harbor for sign of
The Water Sprite
. A two-masted ship that called regularly at the port in Cardri, it was the only one that would fit his needs. The Harbormaster said it left a week ago for Port Haeydan, a Cardri city farther north along the coast and should be returning any day.

The fall air was crisp, the breeze blowing in off the ocean bringing with it the salty aroma of deep water. Above, the sky was clear with but a few errant clouds making their way to the east. At times they would interpose themselves between the sun and those below who wished to take advantage of its warmth. Such a time was now.

A young girl of five stood beside the man and pulled her cloak tighter about her. “Father,” she said with a shiver, “let’s go back to the inn.”

He looked down at her fondly. She had been nothing like what he had thought a girl child would be. After all, weren’t they supposed to be sweet, quiet, and most of all, obedient? Little Jira was nothing like that.

More times than he could count, even should he decide to use both hands and feet, she would be found tussling with the neighbor boys, giving almost as good as she got. And the only reason they got the better of her was that she was but five. Lord help him when she grew. Or rather, lord help the neighbor boys for they would face the brunt of her…enthusiasm.

Her mother wasn’t exactly the most docile woman either. Perhaps between the two of them they had let loose a little hellcat upon the world. But if so, that was the world’s problem for she minded her parents, at least most of the time. Trouble after the fact tended to be her hallmark. She never quite disobeyed, but her interpretation of the laws set forth by him and his wife often flew wide of the mark.

“In a little bit,” he said. The day was still young and he hoped they would not have to spend another at The Dancing Squirrel. It was a nice enough inn but having been cooped up with Aleya and Jira for the past three days was beginning to drive him crazy. There were only so many things to see, so many shops to peruse, and besides, the reason for their trip would be past if they didn’t reach their destination by tomorrow.

Laying a hand on his daughter’s shoulder, he said, “You could have stayed in the inn with your mother.”

“And be bored to tears?”

He couldn’t help but smile. For that was the exact same reason he had given Aleya before coming down to the docks this morning.

“Your mother was going to see about a new dress at the dress maker,” he explained.

Jira glanced up at him. “Mother doesn’t wear dresses.”

Glancing down toward his daughter, he held back the grin threatening to break loose as he said, “It isn’t for her.”

“What?” Jira exclaimed, though to say she shrieked may have been closer to the truth.

“You know you need one,” he replied. His daughter and dresses never were close companions. In fact, the few times they had managed to put one on her ended in the dress being all but destroyed.

“I will have no place for my knives!” Standing all three foot two with hands on hips, she glared up at her father.

Jira and her knives. Now that was one of the touchiest subjects plaguing their family. Early on when she was but three, she came to her father and announced a desire for a pair of knives like his. Jiron couldn’t resist and had two small knives crafted that would fit her well. They were dull as could be, fit more for butter than combat. Still, she wore them with pride.

Aleya frowned upon a girl so young in age wearing knives, but as they were not sharp and could do little damage, she kept quiet. To be honest, her aversion to the knives stemmed not so much from the fact that a little girl should be so equipped, but that Jira had not similarly requested a bow such as the one her mother employed. In the ever contested parental battle, Jiron had won that round. Perhaps in no small part that was why a dress for Jira was about to be commissioned.

“You do not need to wear your knives all the time,” he explained.

“That is different,” he said. “I am a man, not a little girl. I must be prepared to defend my family at a moment’s notice.”

“Rat poop!” she cursed. Seeing as how all forms of adult swearology were forbidden her, she had concocted several of her own that irked her mother no end. Jiron on the other hand thought her little swears were cute.

“Sometimes, little Jira, we must do things we would rather not simply because we have to,” he told her. “Besides, you need to learn the ways of womanhood if you ever hope to find a good man later on in life.”

“Mother dresses like a man,” she said, a bit miffed at having another nugget of parental wisdom descend upon her.

Jiron chuckled. “Don’t let her hear you say that.” Gazing out again to the open water, he spied sails making their way toward the dock. “Ah, perhaps that is Captain Smythe now.”

Moving to the dock’s rail, Jira climbed up two of the boards and looked out over the water. “It is,” she replied in all her adolescent certainty. Then holding onto the top of the rail with one hand while resting her other on a knife’s hilt, she struck a serious pose.

“Oh Jira,” Jiron said, coming to give his girl a hug, “what would I do without you?”

He felt the stares of many directed at him while engaged in this act of unmanliness. And had he seen another man hug his child before Jira came along, he too may have reacted in like manner. But he didn’t care and hugged her all the harder.

Then he suddenly lifted her quickly off the rail and over his head to a squeal of delight. Bringing her back down, he tossed her into the air which elicited another round of glee before she fell back into his arms.

A few more tosses and the sails had drawn close enough for Jiron to see that his little girl had been correct.
The Water Sprite
was indeed on its way.

It took the better part of an hour for the ship to approach and be moored to the dock. Jiron and Jira went to stand at the bottom of the gangplank once it had been extended and waited.

Sailors began disembarking, most new and unknown to the pair. But then one sailor appeared at the ship’s rail. A tall man of middling years with yellow ponytail blown by the wind was one well known to Jiron and his daughter. He grinned and waved when he saw them.

Then, he hollered, “Jira!” and launched something into the air.

Jira sprang into action and flew down the dock after the projectile. Just before it hit, she leaped, drew one of her knives, and speared the apple through its core. Coming to land, she turned toward her father, trophy held high and boasting a most satisfied grin. Taking a bite from the apple, she quickly returned to her father’s side.

“Do you have to do that?” Jiron asked the sailor as the man came down the gangplank to greet him.

“Toby!” Jira squealed in delight as she came and jumped into the sailor’s arms.

“Easy now,” he said as the act of catching her forced him back a step. “Now, if I’m not mistaken, I think this little sprite has grown some?”

“Too much if you ask me,” replied Jiron, rolling his eyes before clapping Tobias on the back.

“I can believe it,” affirmed Tobias. “The Captain said you might be here.”

“How did he…?” puzzled Jiron a moment before understanding came. “Right.”

“We’ll be heading out on the morning’s tide,” explained Tobias.

“That would be perfect,” stated Jiron.

“The Captain gives his regards but said he would have little time to meet with you before we leave tomorrow,” Tobias said. “Cargo to transfer and only a night in which to do it.”

“We understand,” Jiron said. “If either you or he should have a spare moment, we can be found at The Dancing Squirrel.”

“I’ll be sure to let him know,” he replied. Setting Jira on the dock, he ruffled her hair and then shook Jiron’s hand. “Back to work I go.”

“Bye Toby,” Jira said as she hugged his middle.

“You too, you little sprite.” And with that, he turned and headed up the gangplank.

“Come on,” said Jiron to his daughter, “let’s go tell your mother we leave in the morning.”

Taking another bite of apple, Jira happily skipped alongside her father as they made their way back to the inn.