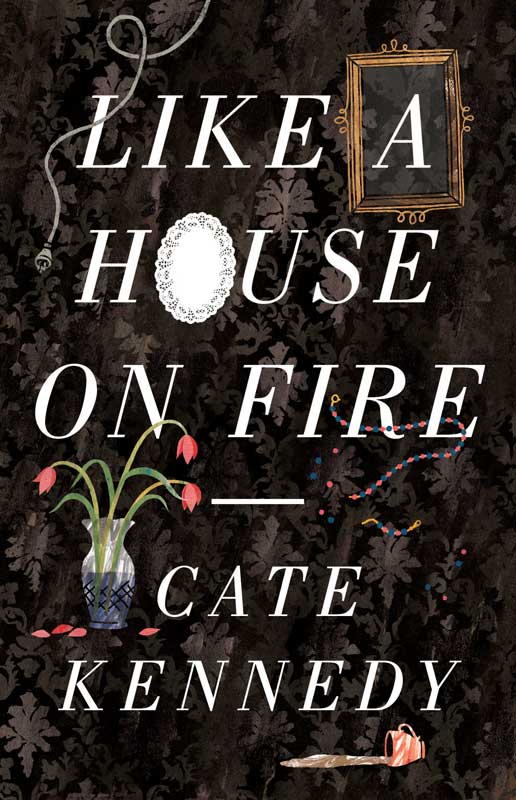 Cate Kennedy is the author of the highly acclaimed novel
The World Beneath
, which won the People's Choice Award in the NSW Premier's Literary Awards in 2010. She is an award-winning short-story writer whose work has been published widely. Her first collection,
Dark Roots
, was shortlisted for the Steele Rudd Award in the Queensland Premier's Literary Awards and for the Australian Literature Society Gold Medal. She is also the author of a travel memoir,
Sing, and Don't Cry
, and the poetry collections
Joyflight
,
Signs of Other Fires
and
The Taste of River Water
, which won the Victorian Premier's Literary Award for Poetry inÂ 2011. She lives on a secluded bend of the Broken River in north-east Victoria. 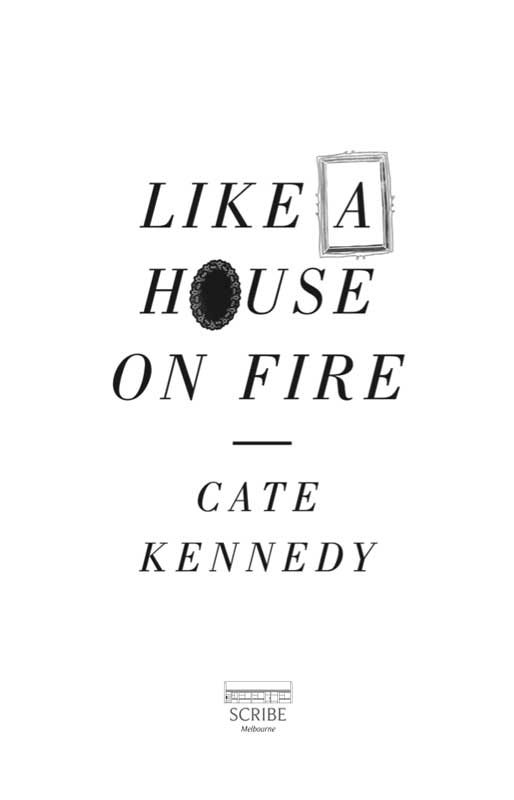 For the friends who've stuck around for many years,
still talking, still laughing, still sitting around the fire,
these stories are for you, with love and gratitude.

âIn the fight between you and the world, back the world.'

He misjudged the bank of the dam, people said when they heard Frank Slovak had overturned his tractor onto himself. Not dead, they said, but might as well be. Caught him straight across his spine. Turning at the embankment, some loose earth, must have been looking the other way and, bang, look what happens.

His wife found him, they went on, pausing to let their listener visualise this, a nightmare they'd all had: hearing the faint throb of the tractor engine changing as it rolled, either roaring or cutting out; or else you'd be hanging out the washing, maybe, and look up to see it in the distance already on its side, metal glinting, upturned rake tines like fangs.

Everyone had imagined, sometime, making that crazed run across the paddocks, faint with whimpering dread, the air sickeningly still over your head like the eye of a storm. Pounding through dust and weeds in that unearthly silence, steeling yourself for what you're going to find.

Yeah, his wife, they said finally, nodding. The quiet one.

Frank's wife notices the dust floating like a heat mirage as she drives up the track with the weekly shopping. She stares blankly at the silhouette on the horizon for what seems like a long time before she realises it's the huge rear wheel of the tractor she's looking at, the vehicle tipped upside down like an abandoned toy. As she runs she kicks off her slippery town shoes and feels dry furrowed earth rising and falling and crumbling under her bare feet all the way to where he's lying.

Eyes rolling back to her. Collar torn off the shirt she'd just ironed the night before, and shattered glass strewn around him like crushed ice.

âTurn it off.' His voice like a bad phone connection, aÂ robot, between locked teeth.

Shaking hand into the upside-down cabin, in and around the buckled steering wheel. Then turning the key, sliding out the familiar clinking weight of the set into her hand. Post-office-box key, car, tractor, truck, padlock for fences. They're hot from hanging in the sun. Stunned and slow, she can smell diesel dripping from the tank cap. What is he saying to her now?

She instantly sees the mobile phone where she's left it on the passenger seat of the car. It's not till she blurts this, tells him she's running back to phone the ambulance now, and sees him swallow and close his eyes instead of shouting at her, that she realises just how bad it must be. Sees too, as she pulls his shirt up to shade his eyes, that every emotion he's withheld from her for the last eighteen years, every flinch and grimace and jerk of the eyebrows and lips, is boiling and writhing across his face now. It's as if the locked strongbox inside has burst open and everything in there is rippling free and exorcised to the surface, desperately making its escape. By the time she's run home, phoned for help and returned â seven minutes there and eight-and-a-half minutes back â the spasms have stopped and he's lying there with his face as emptied as a ransacked, gaping envelope, eyes closed, doggedly sucking air in and panting it out.

You wouldn't believe it, people say when they hear the news. What caught him, what injured him most, was the bloody roll bar. The safety bar that's meant to protect you. Tell that to the Occupational Health and Safety dickheads. Some say he's crushed his pelvis, some say he's going to be a quad, but whatever it is, he's fucked now. You don't bounce back from that. And Frank Slovak, who's a glutton for work and always has been, who's got aÂ temper like a rabid dog and a wife who wouldn't say boo, he's up in the hospital now with tubes coming out of him and they reckon the next forty-eight hours are crucial. No, it's a week now. A fortnight. He must have fractured his â¦ what is it? The vertebrae. The nerves. The man can't feel a thing.

Frank's wife feels sympathetic eyes behind her as she wheels a trolley round the supermarket, women on the verge of saying something but thinking better of it, anxious not to be seen as nosy. After almost twenty years of near-invisibility, the accident gives her an odd kind of glamour. There are casseroles wrapped in foil left at the front door, anonymous gifts of jam and cake and soap. It's like flowers at a funeral, she thinks; a gracious gesture that comes too late, sympathy delivered once you're already dead and buried. And all for Frank, she thinks with bitterness. Frank, who'd rather cut off his own hand than be beholden to anyone, who's never put himself out for any of these people, never done them a single spontaneous good turn. Frank, who liked his privacy to the point of glowering, hostile secrecy.

The year she'd lost the baby, he'd driven her home from the hospital â the big hospital, half an hour away, so that not even the local nurses would know â and told her, looking straight ahead through the windscreen, âWe're putting this behind us.'

No jars of jam then, no lavender soap, not a word spoken or confided, until she'd felt she might go mad with the denial of it. They put it behind them, alright. They harnessed themselves to it, and dragged it like a black deadweight at their backs. They became its beasts of burden. And not a neighbour in sight, then, to drop by with a crumb of pity or a listening ear. Frank had decided that nobody was to know.

She puts the casseroles in the freezer for when she might need them more, and eats at the hospital, and as she sits in the visitors' lounge at the formica table in the air conditioning she catches herself almost revelling in the luxury of eating the first meal someone else has cooked for her in years. It's almost like being on holiday, the way they bring you a form like a menu to fill out, and come round with the trolley asking if you want tea or coffee.

There's nothing to do but wait, they tell her. Absolving her. Then Frank, greyer and gaunter by the day, contracts pneumonia. Sitting next to him in the afternoons, dozing fitfully and reading through old magazines, she listens to the laboured gurgle as he fights for breath even as he sleeps.

It must be like drowning, she thinks as she listens. Just going under, slowly losing oxygen, into blackness. Like wading into the dam; the deeper you go, the colder it gets. Something you'd almost welcome. She's shocked to acknowledge how resigned she feels to this, how it almost seems their best option, considering what prognosis the doctors gave at first. She imagines herself telling people after church:
Well, you know Frank. He wouldn't have wanted to live that way. It's for the best, really
. She thinks about serving those casseroles after the funeral, just something simple at the hall next to the church, something the auxiliary could help her organise.
I'm forty-five
, she tells herself with tentative amazement as she drives home of a night
. That's not old. Lots of women in those magazines are forty-five, and they're all getting on with life.

At the farm someone comes without being asked and puts chains on the tractor and pulls it upright and tows it into town for repairs, and someone else, quietly and without fuss, loads the yearling lambs onto their truck and takes them off to the market for her.

Let him go
, she imagines herself saying should Frank deteriorate and the hospital staff offer intubation.
It's what he would have wanted.
It startles her, this shift to being able to refer to him so readily in the past tense, a smooth, logical transition like changing gears.

But Frank beats off pneumonia, and the doctors start to say things are stabilising after the steroids and there might yet be a partial recovery after all, some limited movement, it's hard to say, and she sits composing her face into relief and optimism while inside, truth be known, she feels cheated. Cheated as she watches Frank lifting a spoon to his face, scowling with a kind of ferocious, vindictive resolve, like he's going to hit someone. Relearning it all like an automaton, determined to heave himself back.

âI'm not going to be a burden on anyone, is that clear?' he mutters to her when the physios finally leave them alone for the afternoon. And knocks her hand away, as she goes to wipe some gravy off his chin.