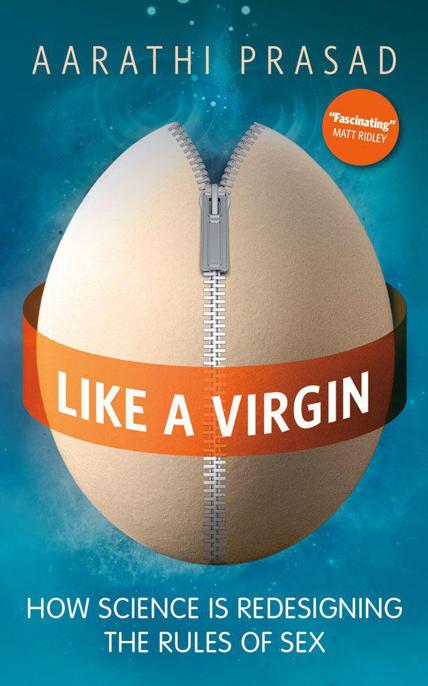 The moral right of Aarathi Prasad to be identified as the Author of this work has been asserted by her in accordance with the Copyright, Designs and Patents Act 1988

Stay up to date with the latest books, special offers, and exclusives content from Oneworld with our monthly newsletter

Part I. The Myth of the Natural Birth

2
The Story of Safe Sex

4
The Concert in the Egg

5
Secrets of the Womb

6
Out of the Test Tube

For my mother, C. D. Nalini, my father, Tarran Persad Rambarran,
and my daughter, Sita-Tara

For most of human history, women have been given little credit when it comes to childbearing.

Sounds strange, I know. Women clearly carry babies and give birth to them, but you could argue, as many have through recorded history, that the female of the species merely serves as a
‘vessel’ – a kind of living incubator. This sort of thinking was by no means the preserve of the uneducated; the very reason it persisted as long as it did in mainstream cultures
and medical practice was because it was ‘tested’, endorsed by the great scholars and shapers of medicine, from Plato through to Leonardo da Vinci. Plato appears to have made the claim
that only men are complete human beings. Aristotle believed that men had the ability to generate a full human being, and that women were reproductively defective. Some four hundred years later, the
physician Galen asserted that the female is imperfect compared with the male. Even when da Vinci made the first
accurate drawings of a foetus in utero – sketching in
chalk a single womb rather than multiple chambers, which were believed to give rise to twins – he still compared the growing embryo to the seed of a plant.

Such prejudices were handed down, generation after generation. Take, for example, Thomas Bartholin, a pioneering Danish scientist from an esteemed family of anatomists and medical scholars.
Bartholin lived in the seventeenth century and discovered the lymphatic system – a finding that would have required a keen eye and the proficiency to carry out a detailed investigation of
human anatomy. Yet, when it came to women and pregnancy, he also documented accounts of the birth of ‘monstrosities’ – such as the woman who delivered a rat, or another whose
child had the head of a cat, because a cat had frightened her when she was pregnant. The idea that what a woman saw and felt, or that specific shocks or scares during pregnancy, would lead to
specific defects in her baby was widespread. Being frightened by a mouse, for example, might lead to the baby having a mouse-shaped birthmark – or worse. Today, we would laugh at ideas like
this, or dismiss them as urban legend. Why would a great scientist, an empirical type, treat any of these things as conceivable?

But then, many outdated ideas about sex and reproduction still persist in many places around the world. These beliefs at times prevent a woman from claiming full biological ownership of her
child, though she is still culpable for any reproductive shortcomings (such as giving birth to a baby with defects; experiencing recurrent pregnancy loss; failing to get pregnant). Even in our
genetic age, there are women who are blamed (and who blame themselves) for giving birth to girls instead of boys. On the other hand, while the scientific evidence is still mounting, it appears to
be true that a mother who, for instance, suffers stress during pregnancy will leave a lifelong mark on her child.
And while we all know that the sperm determines whether a
child is a boy (XY) or a girl (XX), new research shows that a woman’s immune system screens sperm after they have entered her body, and some women’s bodies are more likely to discard
Y-carrying, boy-making sperm. Many of these ideas, based in fact or fiction, are descendants of the cultural vocabulary of ancient Greece and the Renaissance. Despite the reality of test-tube
babies and sperm banks, it seems we haven’t moved much beyond Bartholin’s theory of a rat-child or blame being placed at a mother’s feet.

Far stranger, however, is another long-lived belief: the concept of a virgin birth. From the fertilization-by-feather of the Aztec Coatlicue to Isis’s recipe for resurrecting her dead
husband Osiris’s phallus, to the Blessed Virgin Mary, there appears to be no culture that does not embrace some legend of a woman giving birth without mortal man. You could imagine that
because, in the view of classical thinkers, women were viewed as crude vessels for reproduction, a repository for the vital semen of man, that they could just as easily have their bodies
appropriated by their gods (who, of course, are generally male). But the myths extend to active agents that are not all divine. Human virgin births have been said to be caused by such things as
sunlight and eating magical fish. These examples illustrate just how compelling was the notion of impregnation without sex, in part because there was so little real understanding, for so long, of
how babies are actually made.

We now know that a mother makes an essential contribution of genetic information to her child, as well as providing a protected environment and the physical building blocks for the
embryo’s developing body. Biologically and genetically, women clearly are not mere vessels, nor are they redundant. Still, even when confronted by the double helix of DNA, the combination of
the sex chromosomes X and Y, and genetic variants and
mutations, the belief in the possibility of virgin birth has proved surprisingly enduring. It has ranged from the
technology-fuelled optimism of the post-war boom, when doctors hunted for a virgin mother via the tabloids; to the absurd insurance policy, offered in the past decade, that would cover the cost of
bringing up a child should you experience a virgin birth.

The simple truth, for humans at least, is that neither women nor men are currently redundant when it comes to making babies. Though the females of many animal species have the option of
reproducing quite on their own, for us, a mutual need was established in our distant evolutionary past, and once that treaty was written in DNA, it could never be broken. Never, that is, until
now.

In the future, technology might vindicate a few of the ancient, seemingly absurd concepts – at least in some respects. It might someday be possible to create a child from one parent alone.
Ironically, because of the way men and women’s chromosomes are arranged, the virgin parent will more likely be a man. Geneticists are cracking the codes that block our eggs from becoming
embryos without sperm; stem cell scientists are creating eggs and sperm from bone marrow; artificial wombs are being built; artificial chromosomes are being constructed. And it seems not a minute
too soon. Both male and female infertility is on the rise, and some scientists are warning that the Y chromosome, the very thing that makes men both fertile and male, is slowly but surely dying; it
now has only around forty-five genes of the 1400-odd genes with which it began the human species. If the Y chromosome’s genetic information essentially disintegrates, what solution could
technology offer to sustain, well,
us
?

This is more than a question of futuristic science. The gender roles assigned to us by the fact of sex have, over the centuries, been used to oppress women and justify anti-homosexual
prejudices. If we can make babies without sex, the family structures
that we’ve come to view as traditional may well change beyond recognition. All of these attitudes
will need to be reconfigured to fit our new lives ‘after sex’.

In this way, the ancient myths of a virgin birth may prove to be the prehistory of our species’ future. As Miss Miniver exclaims in H. G. Wells’s feminist novel,
Ann Veronica
:
‘Science some day may teach us a way to do without [men]. It is only the women matter. It is not every sort of creature needs – these males. Some have no males.’ To which Ann
Veronica replies, with some hesitation, ‘There’s green-fly.’

Motion to Suppress by Perri O'Shaughnessy
Home: A Novel by Rachel Smith
The Chantic Bird by David Ireland
Glass House by Patrick Reinken
Worlds of Ink and Shadow by Lena Coakley
Give First Place to Murder by Kathleen Delaney
Me Being Me Is Exactly as Insane as You Being You by Todd Hasak-Lowy
The Immortal Game by Miner, Mike
Finding Stone (The Stone Brothers Series) (Volume 1) by T. Saint John
Dumb Luck by Lesley Choyce
Our partner