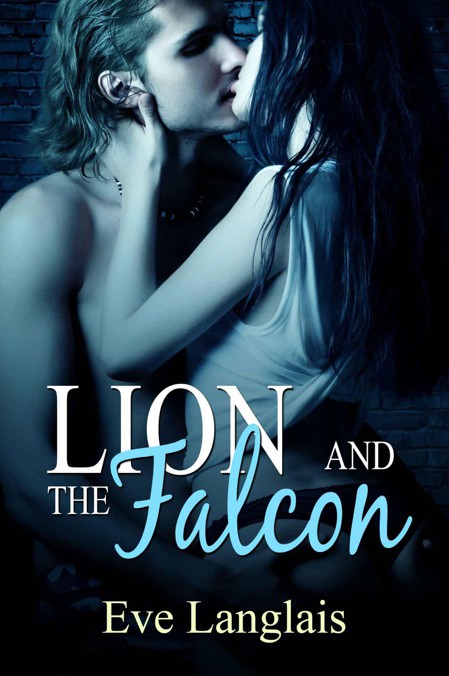 Lion and the Falcon

Lion and the Falcon
is a work of fiction and the characters, events and dialogue found within the story are of the author's imagination and are not to be construed as real. Any resemblance to actual events or persons, either living or deceased, is completely coincidental.

No part of this book may be reproduced or shared in any form or by any means, electronic or mechanical, including but not limited to digital copying, file sharing, audio recording, email and printing without permission in writing from the author.

Lion and the Falcon

Given the choice between dealing with a psycho killer, a meddling mother
, and an all too sexy falcon, this poor doctor does what any sane lion would do—he takes a nice, long nap.

Avian Soaring Security has transferred Clarice to the
Furry United Coalition so she can help track some escaped psycho patients. As if that weren’t bad enough, they partnered her with the very pampered Dr. Manners. Everything about the attractive feline annoys her, except for his flaming hot kisses. But is passion enough to keep a usually sparring species together?

Nolan’s pedigree
isn’t the only thing preventing him from falling for his sexy partner. She’s bossy, violent, rude and oh so intriguing to this curious cat, but his meddlesome mother will never allow him to get involved with a bird. But before he can decide if love is worth bucking pride tradition, he needs to stay out of the clutches of a demented ex-patient.

What’s a poor
feline to do when trouble strikes from every direction? Find a pillow and a patch of sunlight for a relaxing nap, or realize that sometimes a lion needs to make new rules and show a stubborn falcon he’s more than just a handsome kitty?

No more doctors. No more needles. No more restraints or peeing in a bottle. He had every reason in the world to sing. Dance. Do whatever he liked.

But he wouldn’t let a little thing like not knowing exactly where he was burst his bubble. Loping through the barren streets, knuckles dragging on the ground, he breathed in lingering car exhaust fumes, a perfumed taste of freedom. Despite his currently location-challenged state, anything beat incarceration. Sure,
they
labeled it a safe house, but anything he couldn’t freely leave he called a prison. One jailbreak later—featuring some screaming and bloodshed on the less than understanding part of the staff—and he got away not just from those determined to keep him under lock and key for his own safety, he also managed to escape the idiots he’d spent the last few years jailed with. If forced to listen one more time to how M87 lost his stupid eye, well, he might have gone crazy. Or at least crazier than he currently was.

Still, a little insanity
after what he endured didn’t give
them
the right to lock him away. How foolish to think once the mastermind’s secret installation was discovered that he’d have true freedom. He’d simply traded one cell for another. Never mind the second prison boasted more comforts and didn’t involve solitary confinement behind bars or torture. Who cared if the voices of those tending him spoke kindly and treated him well? He and the others rescued remained as always patients. And everyone knew what doctors and nurses did to patients.

Poking and prodding, asking questions
, and drawing blood. Changing their title from experiments to guests didn’t make the obtrusive testing and incarceration any better. The so-called FUC agents, and most especially the doctor, couldn’t fix what was wrong with them. Couldn’t erase what Mastermind did. Couldn’t fill the hungry void inside. Couldn’t cure the anger.

Nothing could erase the injustice meted to him and the others. The indignities—

Ooh, did he smell popcorn? Pausing in his escape, he sniffed the air. Again, the tantalizing aroma came to him; yummy, buttery popcorn coated in caramel. Saliva pooled in his mouth.
How long since I last tasted my favorite crunchy treat?

Pivoting on a bare heel, he
saw the letters of the façade first—Candy Shoppe. How original. Approaching the storefront, where a “Closed” sign hung, he faced the plate glass window and couldn’t help but see the mirrored visage. The reflected monster startled him and he let out a yell as he stumbled away from the apparition. But putting himself out of reach didn’t mean he didn’t stare.

Yellow
-eyed, jaw-slacked, and drooling over extended teeth, the abomination gazed right back. A niggle of unease shook him. He retreated a step and so did the creature. He waved. It waved as well. He growled, “Stay away from me!” only to see the hideous aberration’s bulbous lips move at the same time. A sense of surreal horror gripped him.

No. It couldn’t be. Forward he stepped. Once
, twice, until his nose pressed against the cold, reflective glass and his mind grappled with the truth.

I am the monster.

He, once the most handsome man in his class—if one ignored his stunted height. The cutest monkey in his family when he shifted. The one slated for great things. Who once held a great job, wore suits, and enjoyed the delights of a different beauty every night—and not all of them paid by the hour—now, a creature of horror.

A whimper escaped him.
No! It’s not fair.

Mastermind had won.
She’d finally succeeded after all this time. She’d turned his cute and cuddly side into a nightmarish creation. Oh the injustice of it. To survive intact all those years with her only to succumb when he should have been safe. He’d kill the rotten bitch, especially now that he could remember her face. Rip her tiny limbs from her body. Eat her black heart. Floss his teeth with her stringy hair. Do all kinds of despicable, monstrous things once he found her. It seemed only fair. And he was hungry. So very, very hungry…

First
, though, he needed to take care of something else.

Glass smashed in an almost musical tinkle
as he shoved his hairy fist through the offending partition. The scent of sweet and salty popcorn wafted out and he grabbed fistfuls of it, stuffing it in his mouth. Mmm. Popcorn.

Waking up Monday morning hung over from
a weekend spent drinking too much and going to bed late sucked enough. Waking up to have his mother leaning over him frowning was enough to make any grown man scream like a little girl.

“What the hell, Mom!” Nolan yelled.

“Good morning to you too, son. Late night?”

Bare
-chested, but thankfully wearing boxers, he nevertheless yanked the sheet up to his neck lest his mother check him for hickeys and give him heck for not sporting any. Lionesses enjoyed marking their conquests and his mother enjoyed seeing it, as she said it meant he at least attempted to do his part for the pride. But he’d come home alone last night and fallen into bed before he could stage a few with the vacuum.

In an effort to forestall her questions, he went on the offensive.
“What are you doing here? How did you get in?” A valid question considering he’d just changed the locks—again—in the hopes of curbing her habit of popping in unexpectedly.

“I was worried about you. You haven’t returned any of my texts or calls.”

Intentionally. “I was busy.”

“Too busy to call your poor mother?”
Clutching at her chest, she batted her blonde lashes, but Nolan didn’t fall for it. His mother, matriarch of the pride and pain in his furry ass, didn’t have an innocent bone in her body. Although, he couldn’t deny she cared. She just didn’t care so much about his wellbeing as…

And here it came. “Because I prefer it that way.”

“What happened to the ladies you were wining and dining last night?”

Ladies? Now that was a nicer term than he would have assigned to the she-cats sent, as he suspected, on his mother’s orders. “You mean Jenny and Katie? Don’t worry, Mom, they did their best to get me drunk and have their way with me. No need to punish them. Turns out, they can’t handle their liquor as well as they thought.” Especially when he cheated and poured a few of his shots in the glass of a grizzly named Buzz sitting beside him at the bar. Poor guy, he must have wondered why his glass never went empty—and why he woke up beside a bucktoothed cougar this morning.

Nolan would have to remember to send Buzz a bouquet
of flowers and a bag of honeybuns as apology later today.

His mother’s lips tightened into an almost invisible line.
“So you didn’t bed anyone last night? Or, according to my sources, the night before?”

He didn’t know what he found more disturbing
—the fact she was so well informed about his sex life, or the fact she lamented his lack of one. “Mom, this really isn’t something I want to discuss.” Ever. And especially not with her.

“
I’m worried about you, Nolan. You’re well past the age when you should have settled down with a harem.”

Perish the thought.
He had enough trouble with his existing female family members. Why would he want to add more? Besides, at just shy of thirty, he still had plenty of time to find Mrs. Right. “What you mean to say is why haven’t I done my duty to the pride and fathered a few cubs for you to show off to the other clans. Has it occurred to you that perhaps I’d like to do things my way? You know, date a girl, fall in love, get married, then have kids? You know, the normal way?”

The appalled look on his mother’s face almost made him laugh. Almost. But he knew better. The last person to do that still wore the scars. Son or not, his mother didn’t take ridicule well.
“Normal? There is nothing normal about you avoiding your duty to the family.”

Nolan sighed.
“I am not acting the part of stud, Mother.”