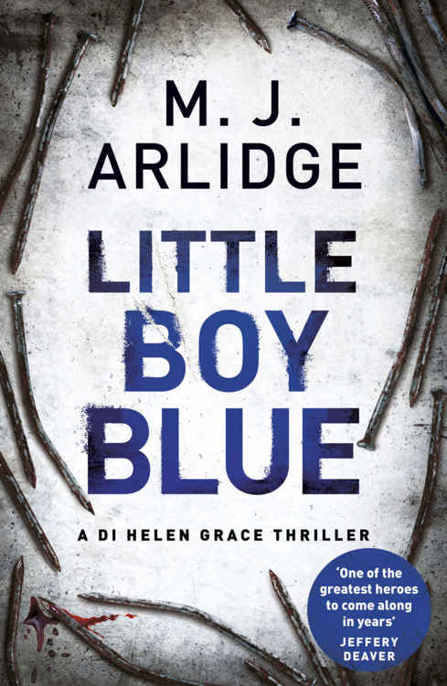 M. J. Arlidge has worked in television for the last fifteen years, specializing in high-end drama production, including prime-time crime serials
Torn
,
The Little House
and
Silent Witness
. Arlidge is also piloting original crime series for both UK and US networks. In 2015 his audiobook exclusive
Six Degrees of Assassination
was a number one bestseller.

His debut thriller,
Eeny Meeny
, was the UK’s bestselling crime debut of 2014. It was followed by the bestselling
Pop Goes the Weasel
,
The Doll’s House
and
Liar Liar
.

He looked like a falling angel. His muscular body, naked save for a pair of silver wings, was suspended in mid-air, turning back and forth on the heavy chain that bound him to the ceiling. His fingers groped downwards, straining for the key that would effect his release, but it remained tantalizingly out of reach. He was at the mercy of his captor and she circled him now, debating where to strike next. His chest? His genitals? The soles of his feet?

A crowd had gathered to watch, but
he
didn’t linger. He was bored by the spectacle – had seen it countless times before – and moved on quickly, hoping to find something else to distract him. He always came to the Annual Ball – it was the highlight of the S&M calendar on the South Coast – but he suspected this year would be his last. It wasn’t simply that he kept running into exes that he’d rather avoid, it was more that the scene had become so
familiar
. What had once seemed outrageous and thrilling now felt empty and contrived. The same people doing the same old things and wallowing in the attention.

Perhaps he just wasn’t in the right mood tonight. Since he’d split up with David, he’d been in such a deep funk that nothing seemed to give him any pleasure. He’d
come here more in hope than expectation and already he could feel the disappointment and self-disgust welling up inside him. Everybody else seemed to be having a good time – and there was certainly no shortage of offers from fellow revellers – so what was wrong with him? Why was he incapable of dealing with the fact that he was alone?

He pushed his way to the bar and ordered a double Jameson’s. As the barman obliged, he ran his eye over the scene. Men, women and others who were somewhere in between paraded themselves on the dance floors and podiums – a seething mass of humanity crammed into the basement club’s crumbling walls. This was their night and they were all in their Sunday best – rubber-spiked dominators, padlocked virgins, sluts-who-blossom-into-swans and, of course, the obligatory gimps. All trying so hard.

As he turned back to the bar in disgust, he saw him. Framed by the frenzied crowds, he appeared as a fixed point – an image of utter stillness amid the chaos, coolly surveying the clubbers in front of him. Was it a ‘him’? It was hard to say. The dark leather mask covered everything but the eyes and the matching suit revealed only a sleek, androgynous figure. Running his eyes over the concealed body in search of clues, he suddenly realized that the object of his attention was looking straight at him. Embarrassed, he turned away. Seconds later, however, curiosity got the better of him and he stole another glance.

He was still staring at him. This time he didn’t turn
away. Their eyes remained glued to each other for ten seconds or more, before the figure suddenly turned and walked away, heading towards the darker, more discreet areas of the club.

Now he didn’t hesitate, following him past the bar, past the dance floor, past the chained angel and on towards the back rooms – heavily in demand tonight as private spaces for brief, fevered liaisons. He could feel his excitement growing and as he picked up the pace, his eyes took in the contours of the person ahead of him. Was it his imagination or was there something familiar about the shape of the body? Was this someone known to him, someone he’d met in the course of work or play? Or was this a total stranger, who’d singled him out for special attention? It was an intriguing question.

The figure had come to a halt now, standing alone in a small, dingy room ahead. In any other situation, caution would have made him hesitate. But not tonight. Not now. So, entering the room, he marched directly towards the expectant figure, pushing the door firmly shut behind him.

The piercing scream was long and loud. Her eyes darted left just in time to see the source of the noise – a startled vixen darting into the undergrowth – but she didn’t break stride, diving ever deeper into the forest. Whatever happened now, she had to keep going.

Her lungs burnt, her muscles ached, but on she went, braving the low branches and fallen logs, praying her luck would hold. It was nearly midnight and there was not a soul around to help her should she fall, but she was so close now.

The trees were thinning out, the foliage was less dense, and seconds later she broke cover – a svelte, hooded figure darting across the vast expanse of Southampton Common. She was closing in fast on the cemetery that marked the western edge of the park and, though her body was protesting bitterly, she lurched forwards once more. Seconds later she was there, slapping the cemetery gates hard, before wrenching up her sleeve to arrest her stopwatch. Forty-eight minutes and fifteen seconds – a new personal best.

Breathing heavily, Helen Grace pulled back her hood and turned her face to the night. The moon was nearly full, the sky cloudless and the gentle breeze that rippled over her was crisp and refreshing. Her heart was beating
out a furious rhythm, the sweat creeping down her cheeks, but she found herself smiling, happy to have shaved half a minute off her time, pleased that she had the moon at least to bear witness to her triumph. She had never pushed herself this hard before, but it had been worth it.

Dropping to the ground, she began to stretch. She knew she made an odd sight – a lone female contorting herself in the shadow of a decaying cemetery – and that many would have chastised her for being here so late at night. But it was part of her routine now and she never felt any fear or anxiety in this place. She revelled in the isolation and solitude – somehow being alone made it feel like
her
space.

Her life had been so troubled and complex, so fraught with incident and danger, that there were very few places where she truly felt at peace. But here, a tiny, anonymous figure, dwarfed by the immense darkness of the deserted common, she felt relaxed and happy. More than that, she felt free.

He couldn’t move a muscle.

Conversation had been brief and they had moved quickly to the main event. A chair had been pulled out into the middle of the room and he had been pushed down roughly on to it. He knew not to say anything – the beauty of these encounters was that they were mysterious, anonymous and secret. Careless talk ruined the moment, but not here – something about this one just felt right.

He sat back and allowed himself to be bound. His captor had come prepared, wrapping thick ribbon around his ankles, tethering them to the chair legs. The material felt smooth and comforting against his skin and he exhaled deeply – he was so used to being in control, to being the one thinking, planning, doing, that it was gratifying to switch off for once. It had been a long time since anyone had taken him in hand and he suddenly realized how excited he was at the prospect.

Next it was his arms, pushed gently behind his back, then secured to the chair with leather straps. He could smell the tang of the cured hide – it was a smell that had intrigued him since he had been a boy and its aroma was pleasantly familiar. He closed his eyes now – it was more enjoyable if you couldn’t see what was coming – and braced himself for what was to come.

The next stage was more complicated, but no less tender. Wet sheets were carefully unfurled and steadily applied, from the ankle up. As the minutes passed, the moisture began to evaporate, the sheets tightened, sticking close to his skin. Before long he couldn’t move anything below his waist – a strange but not unpleasant sensation. Moments later, he was bound to the chest, his lover for the night carefully finishing the job by securing the upper sheet with heavy-duty, silver duct tape, winding it round and round his broad shoulders, coming to a halt just beneath his Adam’s apple.

He opened his eyes and looked at his captor. The atmosphere in the room was thick with expectation – there were many different ways this could play out: some consensual, some less so. Each had its merits and he wondered which one he, or she, would choose.

Neither spoke. The silence between them was punctured only by the distant thump of the Euro pop currently deafening those on the dance floor. But the sound seemed a long way away, as if they were in a different universe, locked together in this moment.

Still his captor made no move to punish or pleasure him and for the first time he felt a flash of frustration – everyone likes to be teased, but there are limits. He could feel the beginnings of an erection, straining against its constraints, and he was keen not to let it go to waste.

‘Come on then,’ he said softly. ‘Don’t make me wait. It’s been a long time since I had any love.’

He closed his eyes again and waited. What would come first? A slap? A blow? A caress? For a moment,
nothing happened, then suddenly he felt something brush against his cheek. His lover had moved in close – he could feel his breath on the side of his face, could hear his cracked lips parting.

‘This isn’t about love,’ his captor whispered. ‘This is about
hate
.’

His eyes shot open, but it was too late. His captor was already winding the duct tape over his chin, his mouth … He tried to scream but his tongue was forced back down by the sticky, bitter adhesive. Now it was covering his cheeks, flattening his nose. Moments later, the tape passed over his eyes and everything went black.

Company Man: Thirty Years of Controversy and Crisis in the CIA by Rizzo, John
The Library of Greek Mythology (Oxford World's Classics) by Apollodorus, Robin Hard
Bone Music by Alan Rodgers
Tracks (Rock Bottom) by Biermann, Sarah
Hapless by Therese Woodson
My Heart Has Wings by Elizabeth Hoy
Whom Dog Hath Joined by Neil S. Plakcy
Nor Iron Bars A Cage by Kaje Harper
Journey of the Mountain Man by William W. Johnstone
3013: MENDED by Kali Argent
Our partner