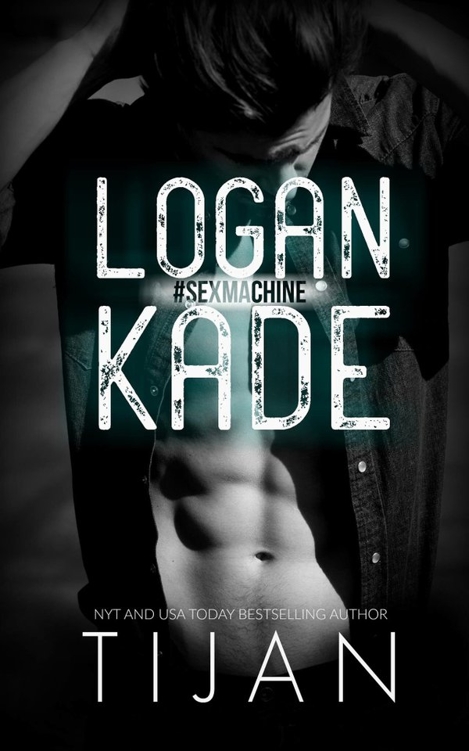 All rights reserved. No part of this book may be reproduced or transmitted in any form without written permission of the author, except by a reviewer who may quote brief passages for review purposes only. This book is a work of fiction and any resemblance to any person, living or dead, or any events or occurrences, is purely coincidental. The characters and story lines are created by the author’s imagination and are used fictitiously.

Logan Kade is written as a standalone, but he is from the Fallen Crest Series. This series does not have to be read before reading, but if a reader wanted to be fully prepared for Logan’s awesomeness, the order is:

For up-to-date information on this series and remaining books/novellas, visit

Logan is so loved and this book is dedicated to all of the Logan Lovers out there! This book is also dedicated to a certain eighteen year old who has been patiently waiting for years to find out Logan’s middle name. I revealed it to her a while ago, but I wanted to dedicate this book to her as well.

I heard the slow and sensual drawl behind me and smirked. I’d always know that voice, no matter what frame of mind she was in. Tate Sullivan had screamed underneath me, at me, and behind my back. Anyway there was, I’d had her. Lover. Enemy. Friend. Fuck buddy. We were all of those, and she dropped a bomb on her way out the last time she was in my life. Turning around, she was walking towards me with a sexy stroll, midriff showing under a white halter top and swinging those hips encased in tight-as-skin jeans. I narrowed my eyes and leaned back against my Escalade, sliding my hands inside my front pockets. “Tate Mother Slutting Sullivan.” There was no warmth in my voice. “What do you want?”

She stopped and lifted an eyebrow. “You’re mad.”

I grunted. That wasn’t a question, and she knew better than to give me an opening. I’d fillet her alive, but instead, all I said was, “You fucked with my relationships the last time I saw you.”

“Uh. Yeah.” Her frosted pink lips pressed together, and her eyes glanced away for a second. “About that, you know that wasn’t to get at you, right? That was to fuck things up with your brother. He’s the asshole I wanted to hurt.”

“Not making it better, Tate.”

“Well.” She gestured behind me to the lit up mansion. Hip-hop music blared, even sounding loud where we were, a few yards away in the parking area. “I saw Mason and Samantha inside. They seem happy and still sickeningly in love, so all’s still good in the Kade/Strattan trio.”

“You told Sam that I was in love with her.”

“To my credit, I thought you were.”

“Bullshit.” I pushed off from the Escalade and started toward her. Her eyes widened, and she backed up. I kept advancing. I wasn’t going to hurt her. With all the history between us, physical violence had never been present. Manipulation. Backstabbing deceit. Her just being a slut as she propositioned my brother when we were dating—yeah, that had all been there, but when Tate came back in our lives, she and I became friends. Well, we were fuck buddies, but those were the best types of friends in my opinion.

“You’re scared of me now, Tate? Not when you told my brother’s girlfriend that I was in love with her. You didn’t just hurt Mason. You screwed with all of us. I love Sam. Always have, but only as a friend and a future sister. How’d you feel if I did something like that? If I fucked with your family, the people who you hold most dear?”

She stopped, her back against a truck, and I stepped closer. Looking down, holding her gaze, I let her see the anger there. She didn’t look away. There was shame in her blue eyes, but resolve, too. Her chin trembled and then hardened, and she lifted her chin higher, standing higher as we stood toe to toe. “You did fuck with my life.”

“You mean when we dated for two years, I was in love with you, and you went to my brother’s room to have sex with him? You mean after that, when he called me while you were propositioning him and my dad was nice enough to get you a driver to take you home?”

She bit down on her lip, her eyebrows pinching forward together. “I was naked, and you were both going to cast me out like that.”

I shrugged. “Who was the one who took your clothes off?”

Her. The truth was silent from Tate, until she said, softly, “I thought we were okay, Logan. That’s why I came out here.” She leaned forward, grazing her breasts against my chest. “We were friends when I left.”

We were more than friends, and I reached up, cupping the back of her neck. She shivered, closing her eyes as I said, “When are you going to learn, Tate?”

Her eyes opened. She waited.

“When you fuck with one of mine, you fuck with me.” I leaned forward, my forehead resting against hers. “And you fucked with my family.”

She knew this wasn’t going anywhere. She pulled her head back, out of my hold, and leaned against the truck again. Her shoulders lowered a centimeter. “I didn’t think you’d get hurt by what I said. I really didn’t mean that. I just wanted to hurt Mason. He’s the asshole.”

“No, Tate. We’re both assholes. You just like how I feel inside of you.”

My lips curved up. I was being the asshole she liked to screw, and we both knew it. I saw the old lust coming back over her. Her skin was warming. Her lips parted. Her nipples hardened under her shirt. But I meant what I said. “What are you doing here, Tate?”

Her bottom lip stuck out. “You’re going back to Cain U tomorrow.” She rolled her eyes, shaking her head. “I thought one last night, but I can see that’s not going to happen.” She gestured around the parking area. “I thought you were waiting for me. That’s what we used to do. The party’s inside, and you’re out here.”

A Crack in the Sky by Mark Peter Hughes
The Post-Humans (Book 1): The League by Bassett, Thurston
Gone Crazy by Shannon Hill
Casca 4: Panzer Soldier by Barry Sadler
the Complete Western Stories Of Elmore Leonard (2004) by Leonard, Elmore
A Flicker of Light by Roberta Kagan
Lamentation by Ken Scholes
The Love-Haight Case Files by Jean Rabe, Donald J. Bingle
B.A.D by Caitlin Moran
The Highlander's Sin by Eliza Knight
Our partner