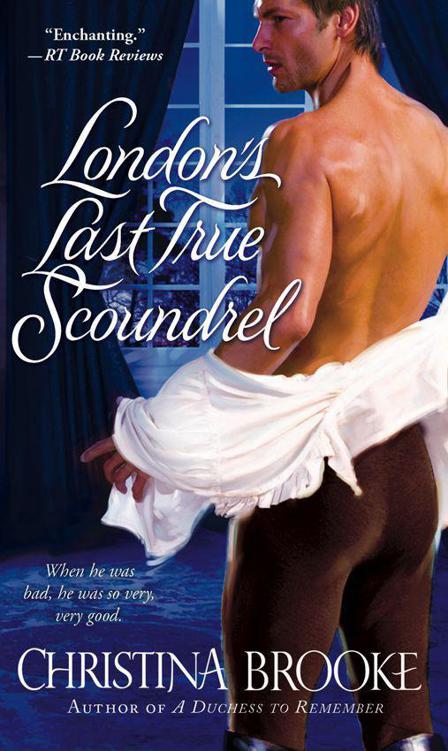 To Denise. This one’s for you, Tigger!

The team at St. Martin’s Press never fails to amaze me with their passion and commitment to publishing. In particular I’d like to thank my editor, Monique Patterson, who pushed me beyond my comfort zone to write this book. Thanks also to the fabulous Holly Blanck and to everyone who plays a part in publishing the novels I write.

To my agent, Helen Breitwieser, my gratitude for your belief in me and for your wisdom and advice.

To Anna Campbell, Denise Rossetti, and Victoria Steele, thank you for your sterling friendship and writerly camaraderie. You make this job so much fun.

To Kim and Gil Castillo, I appreciate your attention to detail in so many aspects of the writing business.

To my dear and talented friends on the Romance Bandits blog, your friendship and support are past price. And to my readers, thank you. You make the whole thing worthwhile.

Last but by no means least, to Jamie, Allister, Adrian, Ian, Cheryl, Robin, and George, who have to suffer through deadline madness right along with me, I love you. Thank you for always being there for me.

Jonathon Westruther, Earl of Davenport, surveyed the three men standing over him with a jaundiced eye. They were an impressive lot, he supposed: large, well muscled, with that arrogant way of carrying themselves the Westruthers had perfected over centuries of uninterrupted rule.

“What a bunch of old sobersides you’ve become,” he said with a lazy grin. “What’ve I done this time?”

Lord Beckenham, the eldest of his cousins, looked severe. More severe than usual, which was saying a lot if you knew Beckenham. “The question is not what you have done
this
time, but what you have been doing ever since your return, what you continue to do. This reckless, profligate behavior—”

“Don’t read him a lecture, Becks,” said Viscount Lydgate, the tall, fair-haired exquisite gentleman, whose beautifully tailored clothes concealed the ability to fight like a street ruffian. “When does any man listen to such stuff?”

He turned frosted blue eyes on Davenport. “You’re the talk of London. Think of Cecily, if no one else.”

“Your sister, old fellow, in case that drink-addled brain of yours has forgotten,” snapped Lydgate. “Your behavior distresses her. That should be reason enough to mend your ways.”

Cecily, who had recently become Duchess of Ashburn, was disgustingly happy, as far as Davenport could tell. But then, he’d avoided Cecily whenever possible, so he could be wrong about that.

Hmm. Distressed, was she? Davenport felt a remote twinge of … something. He refused to let his three cousins see it, whatever it was.

With studied insolence, he took out his watch, checked it, and gave a jaw-breaking yawn. Then he cocked his head in Steyne’s direction and waited.

Steyne’s face held that toplofty, sneering expression it usually wore. Xavier, Marquis of Steyne, could be a mighty unpleasant fellow. But at least he was no stranger to vice.

“Yes, I am quite aware how it must seem to you,” agreed Steyne, his saturnine aspect emphasized by a deep frown. “I am scarcely one to preach propriety. But there is a difference. My sins, while legion, have never attracted vulgar scandal.
You
hover on the very brink.”

“And we’re going to haul you back from that brink,” Beckenham ground out, “if we need to bind and gag you to do it.”

Davenport’s brow lightened at the prospect of physical violence. “You’re welcome to try.”

Despite the prospect of a good fight in the offing, he felt a nagging sense of injustice. He’d been brought back from the dead with all the drama and fanfare of one of Prinny’s phantasmagoric fêtes. The irony was, Davenport no longer cared whether he lived or died. Too late, he’d discovered the price for his resurrection was too high.

Neither his cousins’ threats nor Cecily’s dogged expressions of love seemed capable of shaking the hold of doom upon him.

He’d lost his life’s work and, with it, his purpose. Now he hunted trouble to the four corners of hell.

“No woman is safe from you,” said Lydgate, his usually easygoing countenance hardened with contempt. “This business with Lady Maria must stop.”

Ah. Lady Maria Shand. Davenport fingered his chin. Her duality had intrigued him. In a ballroom, she was a prim, proper miss. Get her alone in the moonlight and she lost no time shoving her delicate little hands down one’s trousers.

But then, females—particularly females of his class—were so hidebound by ridiculous rules and restrictions. Forced to deny perfectly natural, biological urges and desires. The scientist in him cried out against this repression of instinctual behavior. It was his duty to liberate as many of them as possible.

However, before he’d accepted the blatant invitation to satisfy both their natural urges between the lady’s elegant thighs, he’d made a shocking discovery. While he had the laudable objective of freeing Lady Maria from the chains of propriety, Lady Maria aimed to shackle
him
into holy matrimony.

It wasn’t the fear of scandal that stopped him but the sudden insight that Lady Maria’s enthusiastic kisses bore the sour tang of deceit.

His cousins’ warning was thus belated and unnecessary. He’d kissed Lady Maria farewell the previous evening without rancor or regret—on his part, at least.

It was an entanglement that could prove uncomfortable on more than one level. Lady Maria’s father, Lord Yarmouth, had been something of a mentor to Davenport at one time.

“As you said, Lydgate, lecturing will not do the job.” Deliberately, Steyne placed a hand on each armrest of Davenport’s chair and leaned in, his expression full of menace.

“Ruralize,” he said. “Leave London and do not come back.”

“What, not ever?” said Davenport, trying to be amused. What could Steyne do to him, after all? “I don’t think so.”

He downed the brandy he’d left untouched on the table by his elbow. The hit of alcohol seemed to sober him, rather than the reverse. What was he doing, sitting here in Steyne’s library, submitting to a lecture? He wasn’t a schoolboy anymore.

Ruralize.
The Devil! He might as well hang himself from the nearest tree.

In the country, he’d have too much time to reflect on the wasteland his life had become. If he kept himself moving, busy, occupied, he might outrun that demon, at least for a while. He needed London, the busy stench of it, the roistering, the wenching, the endless, pointless amusements afforded to a gentleman of wealth and status.

He’d hoped his behavior would convince the doubters he had nothing more to offer the world of science he’d left behind. Yet, after all he’d done to throw dust in their eyes, someone still watched him.

Another reason to stay in London. Better to be shadowed in a busy metropolis where he might evade pursuit without appearing conscious of the mysterious figure who dogged his footsteps. In the country, there was little prospect of that.

He didn’t know why he hadn’t put a stop to the business. One more product of the general malaise he’d felt since returning to his old life, he supposed.

Davenport got to his feet, but the effort seemed to cost him. All those sleepless, reckless nights …

Tiredness swept over him, a dragging sense of fatigue. Beckenham had predicted it would all catch up with him one day, and suddenly he feared he was right.

He swayed, stretched out a hand, heard the brandy glass topple and fall to the carpet with a soft thud.

His vision slid and slipped. He narrowed his eyes, trying to bring Xavier’s face into focus.

Through a woolly haze, he heard Lydgate exclaim, “Drugged? Was that really necessary?”

“I think so,” came Xavier’s cool reply. His hands gripped beneath Davenport’s arms and lowered him back into the chair.

But Davenport didn’t stop when his back hit the cushion. He was falling, falling, and try as he might, he couldn’t grab hold of anything, couldn’t do a damned thing to save himself.

The darkness rushed up to swamp him.

“Dismissed?” said Miss Hilary deVere, staring at the thin, tall woman behind the elegant little desk in mounting horror. “But—but you have always been happy with my work, Miss Tollington. I don’t understand.”

Miss Tollington’s Academy for Young Ladies had been Hilary’s life since she was fifteen years old. First as a student, now as a teacher of dancing and deportment. No girl left Miss Tollington’s without a thorough, merciless grounding in courtly behavior, etiquette, and dancing from Miss Hilary deVere.

Hilary was twenty years old, an orphan under the guardianship of a man who had so many wards, he’d forgotten she existed. Which suited her very well indeed, since the last match Lord deVere had tried to make for her was with a toothless old lecher of eighty.

She’d given her all to this school. And now they no longer wanted her.

To her credit, Miss Tollington’s thin, plain face worked with distress. She whisked out a flimsy lace handkerchief and pressed it to her mouth. “Lady Endicott called on me, you see.”

Hilary bit her lip. Lady Endicott was a member of the Black family and very high in the instep. Relations between the deVeres and the Blacks had never been what might be called amicable.

“Unfortunately, Her Ladyship has a great deal to say to the running of this school.” Miss Tollington blinked rapidly. The lines that pinched her mouth deepened.

She drew a long breath. “You see, Miss deVere, Lady Endicott has become our new patroness.”

“Oh.” Hilary clenched her hands so tightly, her fingernails dug into her palms. “Yes. Yes, I see.”

No matter what she did or who she was inside, people like Lady Endicott never took the trouble to notice. In Her Ladyship’s eyes, Hilary was a
dastardly deVere
. Someone from her family could not be trusted to instruct young soon-to-be debutantes in proper behavior.

And that was that.

A sense of helpless frustration threatened to choke her. She’d tried so hard to prove herself here. She didn’t know how she could have done more to show that she was not one of
those
deVeres but a properly behaved, virtuous lady who didn’t deserve to be judged on the sins of her forebears.

Hilary would never go so far as to slump her shoulders—good posture must always be maintained, no matter how one cringed inside—but the utter defeat she felt must have shown on her face.

Miss Tollington dabbed at the corners of her eyes with her handkerchief. In a constricted voice, she said, “I am sorry, Miss deVere. So very, very sorry. If I could find a way around it I would, but…”