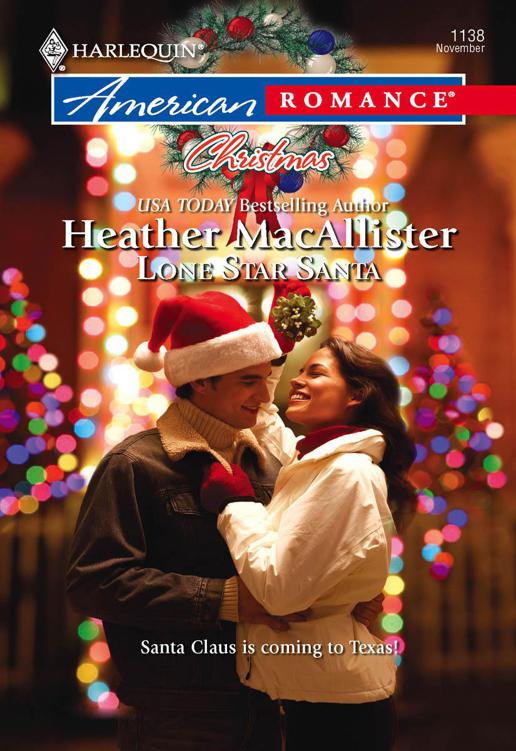 “Curling up with a Heather MacAllister romance
is one of my favorite indulgences.”
—
New York Times
bestselling author
Debbie Macomber

“Funny, sexy and tantalizing,
Never Say Never
is a tale not to miss, and will chase away
any blues you might have.”
—
Romance Reviews Today

“Ms. MacAllister does a splendid job of
creating a sexy and sweet romance.”
—
A Romance Review

As the song says, “I’m proud to be an Americaaaaan…” A Harlequin American Romance writer, that is. When I first started reading the line, I discovered that the books are fast paced
and
heartwarming—just the type of story I love to write. So to me, it seemed a perfect fit!

I had a lot of fun writing
Lone Star Santa
. First of all, I should mention that Sugar Land, Texas, is a real place. I don’t live there, but I live close enough to take advantage of the excellent shopping (heartwarming, at least for me). I love Christmas lights, and the Sugar Land neighborhoods are known for going all out with their displays. However, they don’t have a Christmas Light Parade or an outdoor display in Town Square. But I think they should, so I gave them one in this story (even though it would interfere with the aforementioned excellent shopping).

Kristen and Mitch are typical of my heroines and heroes who always try to do the right thing and get tangled up in their good intentions. And while they’re untangling themselves, they can’t help falling in love. I could draw parallels with tangled strings of Christmas lights, couldn’t I?

But you’re not looking for parallels; you’re looking for a fast-paced, heartwarming story about the pursuit of love in America. You’ve found it! Start reading.

Heather MacAllister lives near the Texas gulf coast where, in spite of the ten-month growing season and plenty of humidity, she can’t grow plants. She’s a former music teacher who married her high school sweetheart on the Fourth of July, so is it any surprise that their two sons turned out to be a couple of firecrackers? When she’s not writing stories in which life takes a funny twist, Heather collects vintage costume jewelry and loves fireworks displays, Christmas lights (which look like frozen fireworks displays to her), commercial-free television and sons who answer their mother’s e-mail. Please visit her Web site at www.heathermacallister.com.

959—HOW TO BE THE PERFECT GIRLFRIEND

For Collin and Meredith
Long life and much happiness

“I told you Kristie Kringle sounded like a stripper.”

“So you thought you’d send me out as one?” Kristen Kringle, née Zaleski, stood on a Los Angeles sidewalk outside the Samurai Salsa Burlesque club as she spoke to her agent. A chili pepper in a kimono posed seductively on the sign.

“Hot! Raw! Girls! doesn’t quite have that Disney ring.”

“The hot and the raw means the salsa and the sushi!”

Maybe not even then.

“You said ‘Leonard, send me out on anything you’ve got.’ This is what I’ve got,” her agent complained.

“It’s a slow time of year. The holidays are coming up, you know.”

Kristen knew that, though nobody was dreaming of a white Christmas in Los Angeles. Tofu turkey, maybe.

She eyed the blinking chili pepper. “This isn’t exactly an acting job, Len.”

“For you it would be,” he retorted.

“I beg your pardon!”

“Now that’s what I’m talking about. You’ve got that classy thing going. It comes with the smaller boobs. To be honest, when I saw your head shot and that you were the Sugar Queen—”

“Whatever. The thing is, most Texas beauty queens…well, I was expecting more artificial sweetener, if you get my drift.”

“You’re mistaking me for Miss Silicon Valley.” Still, with judicious use of tape Kristen could fake it. Had faked it. And had suffered with a red rashy tape mark, too.

No. This wasn’t what she’d envisioned when she’d headed out to Los Angeles with her bright and shiny Miss Sweetest crown over six years ago.

“Now if you could find a Sugar Daddy…” Len interrupted himself laughing at his own joke, such as it was.

Kristen rolled her eyes. She’d heard them all before. Several times. “No, Len.”

“I knew that. Now hon, here’s what I’m thinking. You take this gig and pick up some moves from the other gals and you’ll prove that your lumps are as good as anybody’s. Lumps—get it?”

“It’s all about perception.”

Kristen studied her cleavage. It was there. Somewhere. “I thought it was all about boobs.”

“See, that’s what I like about you. You still have your sense of humor.”

But not her car, which was currently transmissionless. “What about commercials? The orange juice people seemed happy with my work.” Her legs were good, if she could just get people to look down. “Maybe I can be a tomato or something.”

Kristen didn’t understand what was so funny. “Or how about the department stores? Don’t they need demonstrators this time of year? You know, Len, nobody sprays perfume like I do.” That sounded too desperate. Well, she was desperate.

To her surprise, Len abandoned his attempt to talk her into the ethnically confused burlesque show. “Hon, I know you’ve got talent. You know you’ve got talent. It’s the casting people we’ve got trouble with. I still think the smart Texas beauty queen hook works, but in Los Angeles, not so much. You’re more stage. Think east. Think New York.”

Kristen flashed back to drama classes. Stage acting was all very well and good, but for real fame, it was TV or movies. Youth wasn’t so important on the stage. But with high-definition television exposing every little imperfection, youth definitely ruled. Kristen had thought she was being practical going for film work now, if maxing out her credit cards and taking survival temp jobs could be considered being practical.

But after six years, it had come to this: Spraying
perfume at people, sweating inside gigantic fruit costumes and Hot! Raw! Girls!

And, frankly, the first blush of youth had faded.

Leonard was still talking. “I have an agreement with a New York agency—a buddy of mine. We send each other talent. I could give him a call.”

Honestly, Leonard was being far nicer than she’d expected when she’d refused this job. He was dumping her, she’d figured that out, but he was dumping her in a face-saving way she appreciated. She didn’t blame him. She’d been picky lately, and he’d never made much money off her.

Truthfully, she was discouraged. Ever since she’d dropped out of the University of Texas at twenty and headed for Los Angeles, she’d supported herself doing office temp work. She told people she was an actress, and it was true that she was always acting. She acted enthusiastic, she acted as though she loved auditions and she acted as though she hadn’t maxed out her credit cards. But now she was having a moment of truth. And truthfully, she was an office temp. An office temp with not-so-great typing skills who hadn’t kept up with the latest software, but that’s how she made her living, such as it was. It had taken a red-and-green blinking, kimono-dressed chili pepper to make her see it.

“Tell you what, Len. I do appreciate the offer. And New York is…well, New York. But I haven’t seen my parents for a long time. I think I’m just going to head home for the holidays and decide what to do.”

“You do that, sweetie. Sweetie, get it?” He gave a bark of laughter. “Listen, I got another call. Keep in touch.”

He ended the call and that was that.

Well, not quite that. There was her car to deal with. A car was a basic necessity in Los Angeles. As it was in Texas, for that matter. Currently, fourteen-hundred dollars stood between Kristen and a running automobile.

Though she’d just blurted out the bit about going home, now that she thought about it, that was her best option.

She walked down the cracked sidewalk around to the back of the strip of buildings where she’d been told to park. She had a rental car and was relieved to discover that it was still there and apparently still possessed all its parts and tires.

She unlocked the car, got inside and locked the door again. And then she sat.

This car was bottom of the line and the cheapest rental available. It only had eight thousand miles on it and had been liberally sprayed with new car smell. She’d enjoyed driving it the past three days. Enjoyed knowing that when she turned the key, it would start, and once started, it would continue to run until she decided it should stop. And the working radio was nice, too. Little luxuries she’d done without for a long time.

Kristen leaned her head back against the neck rest and inhaled.

She’d become a cliché and she’d promised herself that she’d never become a cliché, but if a small-town beauty queen getting chewed up and spit out by Hollywood wasn’t a cliché, then what was it?

She hadn’t even wanted to enter the stupid pageant. It had been a joke to prove that only blondes became Miss Sweetest and she was definitely a brunette. Only,
she’d been accepted. And then she’d made the semi-finals and then her competitive spirit had kicked in and then there were the finals and the questions and, well, Kristen had been on the debate team.

She’d blown the blondes out of the water. She’d looked mighty good in that crown. It had been a great year. She’d been given a newspaper column in which she’d written about her experiences, and had logged more personal appearances than any other Miss Sweetest. By the time her reign ended, she’d become poised and polished. Opportunity knocked. Doors opened. Acting invitations arrived and she’d accepted them and now here she was…sitting in the parking lot of a burlesque house.

She’d never failed at anything in her life. No, she’d failed
at
life.

Ooo, wasn’t she having a lovely pity party?

Okay, enough of that. She wasn’t a failure; she just wasn’t a success yet. Still, home was looking pretty good right now. She hadn’t been home since her little sister’s wedding and that had hardly been the home she remembered. It had been Wedding Central.

Kristen smiled to herself. Her parents must be bored out of their minds now that Kristen and Nicole weren’t living there. They probably spent all their time eating frozen dinners and flipping back and forth between the weather channel and the home shopping channel. Oh, and the old black-and-white movies they watched together. Just how many black-and-white film noirs had been made, anyway?