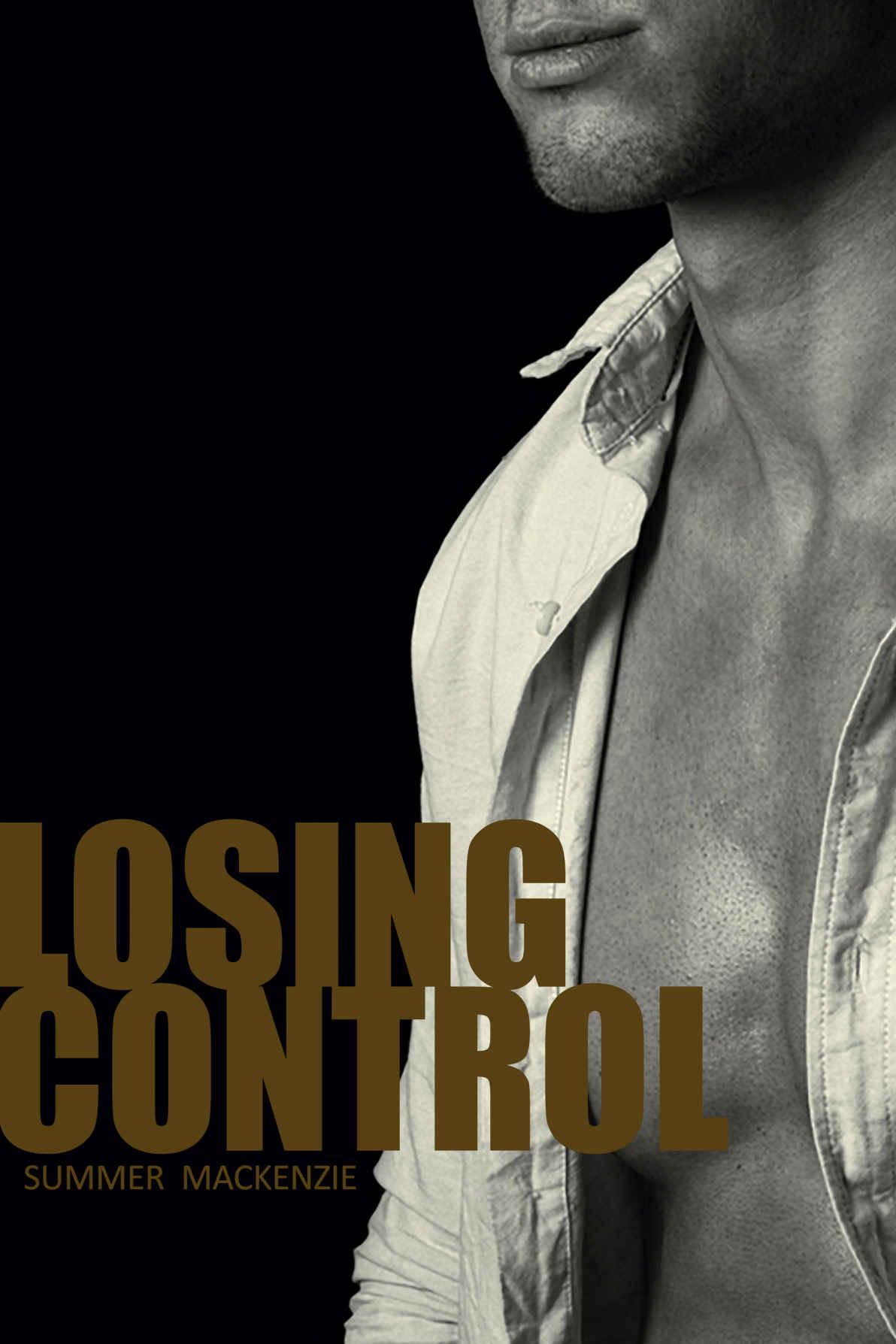 “I asked you if you’re sure you don’t want to be with someone right now?” he said in that low whisper and I could do nothing but stare. We were touching, our hands and our bodies and I was still unable to resist his imposing blue eyes with just a hint of steely gray in them. From that up close they were infinite, deep and full of sad stories he hadn’t told me but that I knew lurked nearby. He pulled me in closer and his lips were over mine, searching my mouth and I forgot for that moment that anything in life existed, that anything was even possible besides this. When we finally kissed, he tasted better than I ever thought he would, better than I imagined…

I was losing control.

I don’t think I’ve ever felt someone break my heart like that ever before. And I don’t think anyone had ever looked this beautiful standing in the rain crying, her flaming red hair dampened to a darker shade and her deep brown eyes full with emotion. She looked so fragile with her tiny physique, all I wanted to do was go up to her, reach out and take her in a firm hold, tell her everything was going to be okay.

I wanted to be there while she sorts through her misery and found her way to happiness, hell I wanted to be the one to bring that happiness to her. But I couldn’t do any of that without scaring her off because regardless of what I felt for her, I knew there were rules to be followed, protocol to be maintained and I hated that but that’s life.

If only she knew what she meant to me, how much I wanted her, how much I was dying to take away her pain. Perhaps if she knew she wouldn’t have been so miserable.

Or perhaps that misery won’t leave her, because pain is funny that way. There was no telling when it would leave her alone and sometimes people got stuck with it for life and while I hoped that wasn’t her, it didn’t matter to me. I may not have been able to take her pain away but at least I could take care of her.

And I wished I could help her but I couldn’t.

So I was going to do what I could do and see if she was willing to give me a few minutes of her time, and perhaps if I was lucky enough, allowed me to comfort her.

This is it
, I kept telling myself. The rain was pouring down on me angrily as if it wasn’t enough that I was the loneliest person on earth right then.

I actually walked out on him.

After all those years of saying over and over again that I should have done it, I finally found the nerve. And I was trembling, not from the cold but from the sheer emotion of it all, crying uncontrollably.

I felt angry and sad, and just plain lost.

I couldn’t stop crying but the rain was a big help.

Why the hell couldn’t I find a cab? This was New York for goodness sake!

I didn’t even know where I was going. I hadn’t thought this through, I just knew that I had to leave Nick and that there wouldn’t be one more second of my life I would spend with him torturing me and insulting my intelligence. I had to prove to myself I was better than what he thought I deserved. So then why was I crying if I was so sure about leaving? Why was I standing out here, helpless and lost when I was certain I hadn’t made a mistake?

“Hey,” I heard someone calling out, his voice piercing through the rain and my wayward thoughts and I turned to find a pair of blue eyes staring back at me. He was young, couldn’t have been more than thirty, and tall, surely a few inches above six-feet. He was wearing a business suit and carried a cigarette in one hand that he stifled out before speaking. “If you stand here crying like this, someone will give you more reason to be unhappy.”

“None of your business,” I said, a little angry that he had been watching me. That is
not
protocol. When someone makes a fool of themselves by crying in the middle of the street, it’s not a good idea to make them aware of it. Why couldn’t he have done what the rest of the world was successfully doing? Pretend nothing’s happening? Get a move on.

But all my hopes of his leaving were gone when he stepped up towards me. “Let me buy you a drink,” he said.

“I can buy my own drinks, thank you,” I said icily but he looked like he had no plans of going away.

“That whole subtle messages thing doesn’t really work on you, does it?”

“Come on,” he said. “What’s the big deal? We’re both in need of a drink. Instead of standing out here in the cold, wouldn’t it be better to be miserable indoors? I can’t be worse than all the psychos you might find standing out here.”

Even with the rain dripping down on him he looked flawless, like some vision right out of a sixteenth century romance novel. I don’t know if it was the fact that he was there in the midst of all my heartbreak or if it was my need to feel like I wasn’t alone, but I found myself agreeing with him.

Okay, so those big blue eyes were more gorgeous than you think and the face they happened to be sitting on was chiseled out so well, it may as well have been carved in stone. He had the kind of smile that barely managed to conceal his mischief and he carried the same playful lilt in his voice. And despite the commanding authority of his eyes, there was something oddly pleasant about that smile. I glanced at the diner we happened to be standing right next to, knowing that having alcohol might not be in my best interests. “I guess I could go for some caffeine,” I said.

He held out his hand for me to shake. “I’m Thorne Ryker,” he said.

Despite myself, I smiled and took his hand, tried to give it a friendly shake but it still raised the strangest kind of sparks. He wouldn’t let go of my hand until I pulled away. “Elena,” I introduced myself, with my real name, I realized too late. “Elena Monroe.”

When we finally set foot inside the diner I realized with more force just how late it was and how it might have been a bad idea to walk out at this particular time, but if I hadn’t done it then, I probably wouldn’t have done it for another century.

No regrets
, I kept telling myself.

Sitting inside, I was actually glad I took up on his offer. When the coffee arrived I wanted to just sit there and enjoy the warmth. It was a whole lot better than being outside in the dreadful weather.

“Can I ask you something?” Thorne asked.

“Are you going to ask me about what I was doing crying out there in the middle of the night?”

“Here’s the thing,” he began. “I am a total stranger. And total strangers have privileges. You can tell me anything because I don’t know you and for that reason you have nothing to be afraid of.”

Yeah right. I should just tell you that I walked out on my fiancé Nick, the person I spent the past four years of my life with. I should tell him that I am twenty-four and don’t have the slightest clue what I’m going to do with my life. I just don’t think I wanted to load this on someone I barely even knew.

He looked disappointed. Even in the bad light of the diner he was strikingly handsome. Most of the women and probably some of the men as well, were obviously ready to go home with him, the way they were giving him looks. But he seemed to be ignoring everyone. Everyone but me, of course. “Did I say something wrong?” he asked.

“Listen,” I said, trying to be polite. “I appreciate your coming up to me. I know it was a gesture of kindness, but you don’t have to stick around. I’m a big girl. I can take care of myself.”

“That’s okay,” he said, smiling again. “I’m not doing you a public service you know? I’m here because I want to be here.”

I didn’t really know what to make of that. I was sitting in a stupid diner with a stranger I met and I had zero plans for the next moment. All of a sudden my life looked bleak and downright scary. I was supposed to be brave and I wanted to feel it but I couldn’t help but feel a little frightened. Perhaps that was why Thorne’s being there was actually comforting. But with the coffee finished there was no reason left for either of us to stick around. So I paid the bill and stood, prepared to face whatever lay ahead.

“Where’re you going to go in this awful weather?” he asked when we stepped outside again. “Can I give you a ride home at least? I promise not to hold my axe over your head.”

“As promising as that sounds,” I said, trying to make light of it. “I’ll have to decline.”

He looked annoyed. “You don’t have to keep up the act,” he said. “I can tell you’re running away from something. I don’t know what it is, and I don’t care that you don’t want to tell me. But please, just let me drop you off wherever it is you need to go.”

Even though a part of me wants someone around, I don’t do it. I had to stop making the mistakes I’ve made before. “I’ll see you Thorne,” I said and started walking away from him. But I hadn’t even hailed a cab yet when the tears began falling freely from my eyes, out of my control.

James, Stephanie by Fabulous Beast
Twisted by Jake Mactire
DARK CITY a gripping detective mystery by CHRISTOPHER M. COLAVITO
TRACE EVIDENCE by Carla Cassidy
Night Music by John Connolly
Stone Rising by Gareth K Pengelly
The One Who Got Away: A Novel by Bethany Bloom
The TROUBLE with BILLIONAIRES: Book 2 by Kristina Blake
The Cedar Face: DI Jewell book 3 (DI Elizabeth Jewell) by Carole Pitt
Vincalis the Agitator by Holly Lisle
Our partner