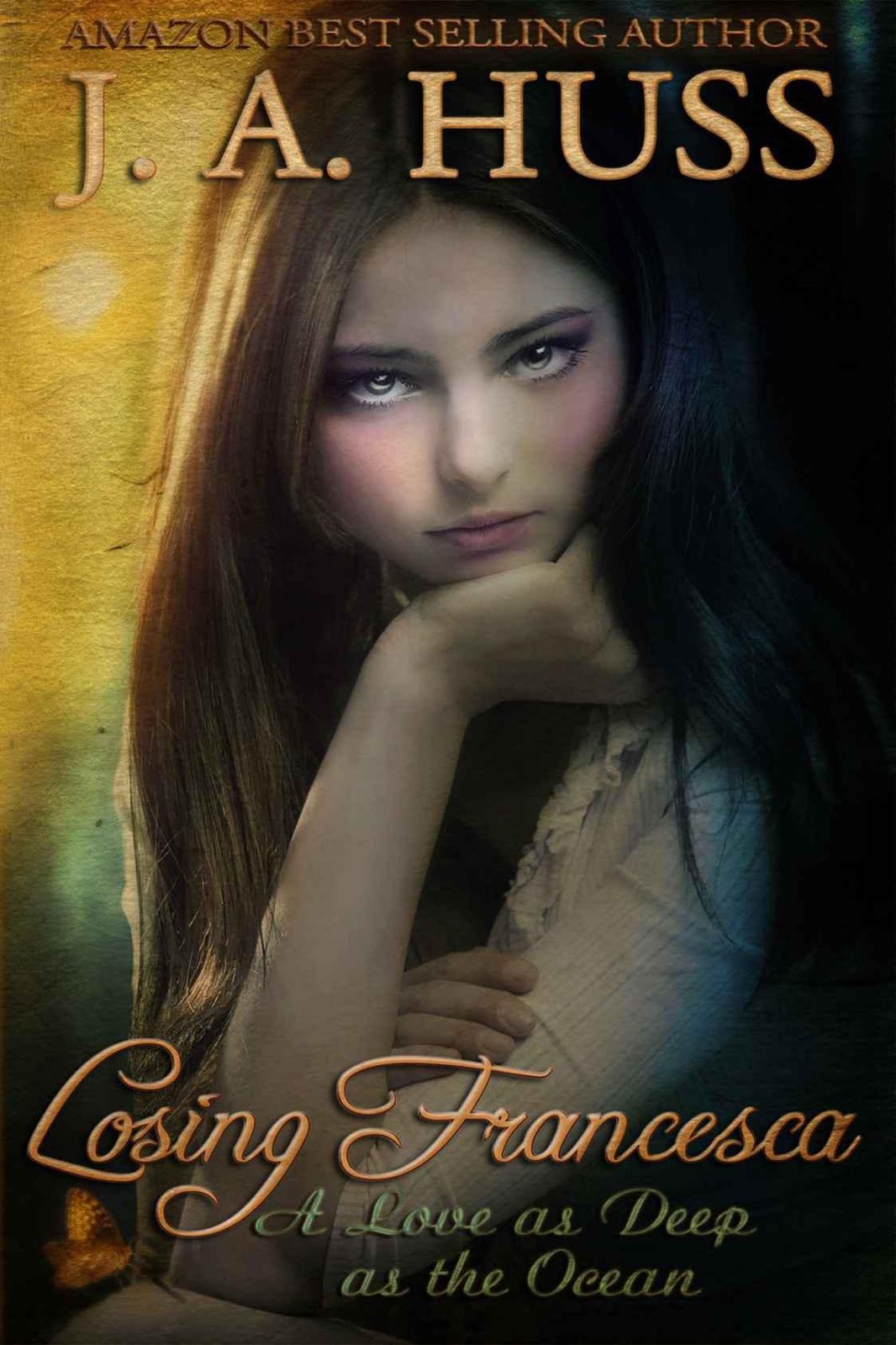 I let out a deep breath as the Social Services van completes its trek up a winding driveway, flanked on each side by thick woods, and stops in front of an imposing red brick house. The whole place smells like wet horses and mud, courtesy of the barns that cover the property and the torrential downpour that is pummeling the van. Normally I don't mind the smell of horses, but I haven't eaten in two days and now I'm paying for my stubborn refusal to feed myself with nausea.

"Are you ready, Francesca?"

"There's no need to be rude, Francesca. And please, we know you speak English. No more faking it."

She huffs at me because she speaks Italian, so she could just as easily speak that language to me. But she refuses.

I'm being held prisoner by the American government all because my face matched a progressive artistic rendering when I passed through security at the airport in LA. I am the daughter of someone, but it isn't Frank Sullivan. I'm sorry his daughter was stolen or killed, or whatever it was that happened to her, but I am not her.

And it's not even like they're trying to say I
am
Frank Sullivan's daughter, because we all know that he adopted her, so it's not even within the realm of possibilities that I am related to this man.

Yet here I am, about to be sentenced to live in his home for the entire summer.

So I huff out a long, loud breath of air. All this is happening because of some girl who went missing twelve years ago who was not even his own flesh and blood.

I scream it and Mrs. Marco turns around to yell at me, but then a man is knocking at her window so she takes her attention to him and buzzes the control on the door to make the window roll down.

He's tall and his tanned arms are muscular. He's wearing jeans and a faded blue t-shirt that has a horse logo on it and his eyes look tired. The dark circles underneath make him look older than he probably is. I look away from his face, because it's kinder than the face of a kidnapper should be, and refocus on his hands. They are clutching the handle of a large black umbrella so hard his knuckles are turning white. The umbrella drips rivers of water into the van, which makes Mrs. Marco scoot back away from the window, but the man pays absolutely no attention to her. His eyes are fixed on me.

He sighs and forces himself to smile. "Would you like to come in out of the rain?"

I'd like to point out that I'm not the one in the rain, he is, but he looks fragile and that's kind of how I feel at the moment, so I just say nothing.

Mrs. Marco jumps on that little display of weakness and before I can even regret my lapse in rudeness, she rolls the window back up, opens the door, and plants herself under the umbrella of the man. She tells the driver she'll only be a few minutes as she whooshes the side door open and starts rolling her hand at me to get out.

I look down and see that she's standing in about six inches of mud that's covered her shoes and is most likely seeping into her socks at this very moment. That mud is probably saturated with horse crap, so I take my time unbuckling my belt and grabbing my bag. The man takes the bag from me and extends a hand to help me out, but I shake my head and he withdraws the offer.

Mrs. Marco's shoes, I note with satisfaction as I lower myself out of the van, are ruined. This smugness is interrupted by the mud that invades my own shoes and then I'm being tugged towards the house. The polished concrete steps are wide enough to allow all three of us to climb them together and when we are under cover of the porch the door opens and the rain is banished to the outside world as I am ushered into a cacophony of noises and smells and activity.

I swallow. The fear that this is real suddenly overtakes all my feigned indifference and courage, and I cling to Mrs. Marco—begging.
"Per favore! Per favore non lasciarmi qui!"

"Francesca, you will be OK. I will come back every week to check on you."

"
No! Per favore! Io non sono Fiona Sullivan
!" My fingers have the sleeve of her shirt in my grasp and I realize I'm actually hurting her when she winces. "
Per favore
," I whisper. It's all I have left.

For two months I've been telling myself this is not happening. This is just a big misunderstanding. I won't be stuck here in America, I will get back on that plane and go home, and this whole nightmare will be over.

But it's not over. It's just begun.

A flurry of people, children and teens of all different ages, bound down the stairs and head into another part of the house. I look around hesitantly and take in my surroundings. The father is looking at me like he's ready to cry. The woman next to him is younger—maybe early thirties—and she's got a pinched smile on her face. And the children. There are so many milling around I have no idea what to think of them. The youngest appears to be about eight, the oldest is a boy a little older than me.

Mrs. Marco is leaning down into my face to get my attention back.

"I will be back one week from today. All right? If you need me"—she pulls out a card and presses it into my palm, then gently folds my fingers over—"just give me a call. My cell phone is always on and this is a direct number."

I stand there and look past everyone to the far room in the house. All the children are staring at me now.

"Francesca? Do you understand?"

I look up at her and nod. What else can I do? She is leaving me here with these strangers and I have no say in the matter. All the court appearances, all the fighting, and all the legal motions are over now. The judge made his decision. Fiona Sullivan will be eighteen in seven weeks, but until that day, I must stay with the Sullivans on the possibility that I am the missing daughter.
Mr. Sullivan deserves a chance to know you
, the judge had said. And seven weeks of my life will not kill me.

I've pushed her last button because she ignores my defiance and starts up her legal speak with the Sullivans.

The older boy comes towards me and I try to shrink behind Mrs. Marco, but she pushes me aside and makes her getaway out the front door and back into the rain. The parents follow her out onto the porch, still asking questions.

I look around wildly.

I just shake my head at him.

My fight is all gone, but I repeat the words one more time. "
Io non sono Fiona
."

He smiles at me. It's warm and bright. And then he takes my hand and leads me into the family room where all the other kids are staring at us. "I know you're not Fiona, silly. I think I would recognize my own sister. Just forget about it, OK? Just pretend you're here as an exchange student or something. You're just here to check things out and in seven weeks you can go home and forget all about us crazy Americans. OK?"

I nod because this actually makes me feel a little better. "OK." I'm an exchange student, this isn't my brother, this isn't my house, this isn't my family. I'm a guest. "OK," I say again, like I'm talking myself into it.
"Si, va bene. Faccio parte di un programma di scambio studentesco."

"Right. Now you got it." He smiles at me and then turns me around to face the kids.

"OK, everyone. This is Francesca, the newest guest here at Sullivan's Home for Imaginary Friends." They all laugh, even the older kids, like that's some kind of inside joke. "We're all gonna treat her like you wanted to be treated on your first day here. That means no snippy remarks," he directs this to the oldest girl who has a scowl on her face, "no sneaking into her room," this one is directed to the youngest girl who I pegged to be about eight, "and no getting her in trouble." This one he directs to the two teen boys who look like twins.

They snicker under their breath, but Sean lets it go.

"OK, who's hungry?" This causes an uproar with the kids and they all rush out of the room. "They are pretty easy to control, just promise them barbecue."

My stomach grumbles at the thought of eating and Sean hears it.

"Come on, I'll take you to the food. Usually we have a big family dinner and sit at the table, but whenever we get a new foster kid—even though I know you're
not
a foster kid, just an exchange student from Italy"—he winks at me and I can't help but smile—"we're giving you opening day treatment as well."

I follow him through the large family room that is filled with overstuffed furniture, then into the open kitchen, and right out the back door where all the kids are crowded under a massive pavilion in the middle of a large green yard. Underneath is a grill smoking with food.

Sean and I run in the rain until we're under shelter, then he leads me over to a table and we start getting plates and chips and buns. He directs me to sit at another table, next to the smallest girl, and then takes my plate to get me a hamburger.

The girls all chat as we sit there. They pepper me with questions but I don't answer any of them, not even in Italian. If they take this as rude they don't show it, just continue their conversation like they don't notice. Sean listens in but does not participate in their talk of clothes and hair and make-up. Until, that is, the little one called Aimee blurts out that the older one, Lindsey, was hanging out with the Mason boys yesterday.

The Bone Bed by Patricia Cornwell
Apocalypsis 1.04 Baphomet by Giordano, Mario
Adam by Kris Michaels
Tomb in Seville by Norman Lewis
NF (1957) Going Home by Doris Lessing
The Great Shelby Holmes by Elizabeth Eulberg
Before and After by Lockington, Laura
Lakeshore Secrets: The McAdams Sisters - Kate McAdams (By The Lake Series Book 1) by Leah, Shannyn
Bought (Unchained Vice Book 3) by Nicolette Hugo
What I Was by Meg Rosoff
Our partner