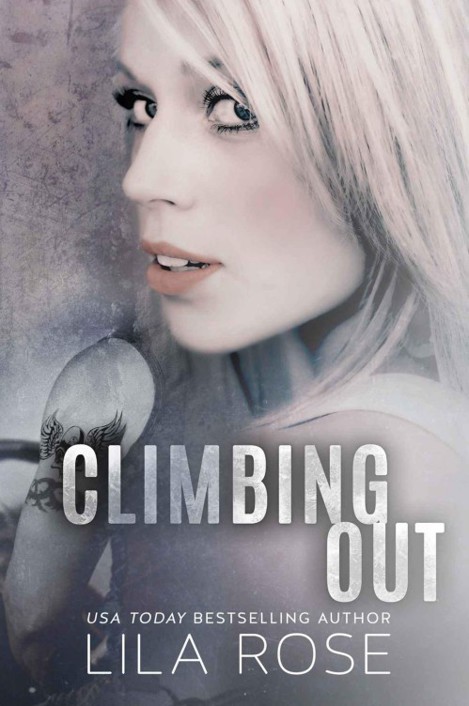 To my family, who has encouraged me to continue doing what I love.

I
have found that this is always the hardest part in writing a novel, because there is always many who I want to acknowledge.

F
irst and always Becky, Kayla and Justine. I'd honestly be lost without you three who have helped my work reach its fullest. Thank you.

T
erri, Debbie and Dawn, thank you for your kind words and support.

L
ouisa at LM Creations. You are amazing!

A
ngel at Angel’s Indie Formatting it was a true pleasure to work with you.

E
na at Enticing Journey Book Promotions. You are a superstar at what you do and I appreciate all your hard work.

N
icole, who Deanna is based off. I love and admire you. You're strong in many ways and you deserve the best in life.

M
y street team members, who have helped me pimp, support and begged me for more. You keep me going, knowing that you're all out there waiting to read whatever comes outta my head.

T
o the readers, I am so overwhelmed with the amount of people who came to me telling me how much they loved
Holding Out
and can't wait until
Climbing Out
. I only hope that you'll receive enjoyment out of reading this sequel like I have writing it for you all!

A
s I watched Zara and her new husband twirl on the dance floor at their wedding reception, I wanted to throw up. Then again, I was also so fuckin' happy for her; maybe that was why I felt sick to my stomach...

She looked absolutely beautiful in her designer gown, even if her baby bump was showing. It was as though she pulled her dress from a page in a princess storybook and slapped it on herself. Bitch.

Only she deserved this happy day, and so many more after the hell she'd been through. Even though three months had passed, it still felt like yesterday when I'd come out of Griz's room at the compound to find Zara had been taken. The thought that I'd possibly lose my best friend shattered many things inside of me.

Yes, she pulled out of it, but I knew what something like that could cost you mentally. Sure, she seemed fine on the outside, but the inside would be a different matter. At least she had her boss-man to take care of her, and I knew he would.

Sighing, I sat back in my chair, and even though my insides were playing turmoil, I felt myself smile. Zara would soon be whipped away for her honeymoon in Fiji, the vacation they never got to have because everything turned into crazy-arse wedding planning mode. She was so excited about it, and when she got excited, other people also joined in on her thrill ride.

From the look in boss-man's eyes, I knew she'd be on her back in a matter of time. I chuckled to myself. There was no way I'd ever want to be in that situation. Okay, so yeah, I could do with the part of being on my back, just without the being married and knocked up bit.

My eyes searched out Griz. He stood on the other side of the dance floor, casually leaning against the bar; his eyes were on me. I squeezed my legs together. Goddamn did I want that man, but he kept fighting it, and right then I was glad he did.

My life for the next seven months or so was going to be busy. I didn't need the distraction, and I knew as soon as I had my hands on Griz, I wouldn't ever want to let go.

I looked to my bag and saw the letter sticking out. I pushed it back in and zipped it up. That was the second letter; I got the first one when Zara's shit had started. Both were like a knife to my stomach. I thought I'd gotten rid of him from my life—obviously that wasn't the case.

I had eight months before he came looking for me.

I could only hope my plan would work.

C
lick, click, click.
The sound of my fingers flying over the computer’s keyboard was starting to annoy the fuck outta me. I turned up
Roachford
on my iPod sitting in its dock on my desk. My attention quickly went back to the monitor.
Buy, buy, and buy.
It was all I could think of.

Some thumps on my front door sounded over the music. I rolled my eyes, because I already knew who it was. Sighing, I put a halt on my online retail therapy and slid my chair back so I could bang my head against the desk. She was never going to get the fuckin' hint I wanted to be left alone for a while. I didn't want to taint her happiness with my...bitchiness.

“Open the flipping door, Deanna. I'm a woman on edge. I had a large slushy on the way over
and
I'm six months pregnant. Do you want me to pee on your doorstep for all your neighbors to see?” Zara yelled.

I shouldn't have turned up the music, because now she knew I was definitely home, and
I
knew she wouldn't be ignored this time.

“Come on, cupcake; she's going to blow,” Julian joined in on the yelling.

Scoffing, I got up and started for the front door of my two-story house. On the way, I took in the sight surrounding me. There was no way I could hide anything in the next two seconds, so I opened the door and prepared myself for hell.

“You.” Zara glared as she cupped her hoo-ha with one hand while the other was pointing a finger at me. “We have some talking to do, wench, but move, 'cause I've gotta go.” She pushed past me and ran for the bathroom that was down the hall off the lounge room, only her steps faltered before she reached the hall’s doorway. “What the truck?” She gaped at everything around her.

“Incubator, we'll talk about how crazy our girl is after you pee,” Julian said as he stepped through the front door and kissed me on my cheek.

I shut the front door and was geared up to knock myself out when Julian squealed behind me. I spun around and saw him clutching the
Ouran High School Host Club
DVD box set to his chest.

“Oh, my gawd! I-I've wanted this for years, but Mattie said if I got it he'd turn me out. Holy capoly, girlfriend, be prepared to have me living at your house just so I can watch this day-in and day-out.” He sighed.

Julian eyed me suspiciously. He leisurely took me in from head to toe and then back again. “You look like shit.”

I rolled my eyes and went back over to my desk, sat down and hit buy. A notice popped up on the screen announcing I was now the proud owner of a house in the Grampians.

Even though my eyes were still on the screen, I knew exactly when Zara had come back out. She stood behind me and slapped me on the back of the head.

“What the fuck?” I spun my computer chair around and glared up at her.

“What the duck, indeed,” she hissed. “What is going on here, Deanna? I haven't seen you in two, nearly three months, and this is what I find when I finally catch you at home?” She gestured to the room around her. “Are you starting your own Target store? What is with all this crap?”

All this crap was the only thing I hoped would keep...
him
from coming after his—well, what he thought was his—inheritance. If I spent nearly every penny, he'd have no reason to hunt me down.

However, I couldn't tell Zara any of that. She was in a happy place after having been through her own hell. I wouldn't bring her down again.

She turned to Julian, who was still fawning over his DVDs. “Do you believe her lies?”

“Hen pecker, I believe her lies are so big I could roll them in a joint and be high off them for a year.”

“See? We don't believe you.” She pulled me outta my chair and studied my face. “Hun, please, please tell me what this is all about. And I mean everything—why you've been avoiding us, and why your house looks like a...a hoarder’s place.”

“Do you guys want a coffee?” I asked instead of answering. Though, making a quick escape to the kitchen didn't work; they followed me.

“Don't make me bring in the big guns to get you talking, Deanna Drake.”

I laughed. “What, your mum?” I walked around the bench and readied the coffeemaker, and then turned to them as they sat at the kitchen counter.

I interrupted her. “Is that where Maya and Cody are?” I asked. Zara and Talon had won full custody for Cody two months ago, and they were ecstatic about it. So was Cody; he loved Zara, even more than his own mother. Though, no one could blame the kid; his mom was a slut.

“They're at school. Do you even know what day it is?”

“Sure, I was just fuckin' testing you, making sure you knew where your kids were, ‘cause you know, once your tribe pops out of you, you're gonna have to be on your toes.”

“That's the truth.” Zara glared. “That's it; if you don't start talking, I'm calling.” She grabbed her phone from her jeans pocket and opened it, fingers ready to dial.

“It's nothing you need to worry about, bitch.”

“Who the fuck are you gonna call?” I snapped.

“The boss-man.” She smiled.

“If you call him, I will seriously be pissed at you,” I informed her, and then leaned against the kitchen bench with my arms crossed over my chest.

“I'm willing to take your pissed-off mood if it gets me to the bottom of what's going on with you.”

I closed my eyes and sighed. “Zara, please just leave it be.”

Zara nodded and said to me, “I know, but I can't let you deal with whatever you are on your own, Deanna. Friends don't do that. Also, if I recall correctly, it wasn't that long ago you were at my side through all my hell, and you wouldn't listen to me when I wanted it left well enough alone.”

With a roll of my eyes, I said, “But look at how well all that turned out. And that was nearly a year ago.”

“Tell me, Deanna,” she pleaded.

I shook my head. “It's fine—nothing.”

“Zara! Just let this blow over, and then everything will be back to normal.”
I hope
.

“Nothin’. Look, I got crap to do, so both of you can just fuck off outta here.”

Zara frowned, shook her head and then uttered, “One.” She pressed her phone to her ear.

I ran around the bench intending to tackle her for the phone, but she must have known that would have been my first move. She ran from the room.