Read Lost in the Forest Online

Lost in the Forest 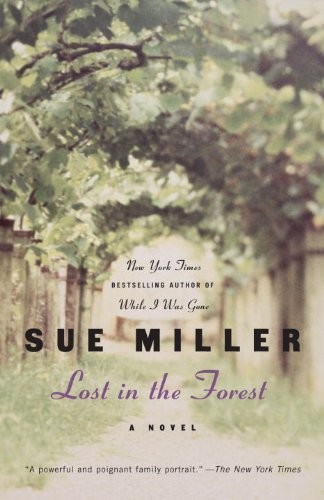 Praise for
Lost in the Forest

“[Miller] traces the reverberations of a death in the family in a poised and powerful style.”

“In her gripping and surprising new novel, Miller is at the top of her game.”

“In this moving book, Miller explores the complex relationships between daughters and their fathers, and the bonds that sustain them.”

“Riveting … Miller once again demonstrates her singular gift for capturing the rhythms of daily family life with laserlike clarity while also summoning the turbulent emotions just beneath the surface.”

“Miller at her best: engrossing characters and a plot that turns unexpected corners.”

“Reading [
Lost in the Forest
] is like participating in a kind of prayer, a quiet celebration of the careful and painstaking work that must have gone into creating it.”

“Miller is a master of the domestic drama.”

“[Miller’s] ear for dialogue and her sense of family relationships are both unerring.”

The Story of My Father

While I Was Gone

Lost in the Forest
is a work of fiction. Names, characters, places, and incidents are the products of the author’s imagination or are used fictitiously. Any resemblance to actual events, locales, or persons, living or dead, is entirely coincidental.

Originally published in hardcover in the United States by Alfred A. Knopf, a division of Random House, Inc., New York, in 2005.

Grateful acknowledgment is made to Harvard University Press for permission to reprint “1452: Your thoughts don’t have words every day” and “1726: If all the griefs I am to have” from
The Poems of Emily Dickinson
, edited by Thomas H. Johnson (Cambridge, Mass.: The Belknap Press of Harvard University Press.) Copyright © 1951, 1955, 1979, 1983 by the President and Fellows of Harvard College. Reprinted by permission of the publishers and the Trustees of Amherst College.

I want to thank Dori and Doug Towne of Calistoga for their warmth and our long friendship. I’m grateful to Kathleen Cornelia and Phillipa Jones of the Diageo Company for their kindness. Sterling Vineyards and Beaulieu Vineyards were extraordinarily welcoming and gracious on one of my exploratory trips. I thank them. John and Sloan Upton of Three Palms Vineyards told me fascinating and funny tales of their start, and entrusted me with their album of photographs, which fed my imagination about the physical labor and pleasure involved in making a vineyard from scratch.

Nigel Newton, my British publisher at Bloomsbury, encouraged me and introduced me to Jon Kongsgaard, who shared with me a bottle of his own extraordinary wine and talked, over a long Napa lunch, about his life growing grapes and making wine. Tony Mitchell generously answered my nearly endless list of questions about vineyard management. Andy and Lilla Weinberger were kind and patient with me over the days I “helped out” at Readers Books in Sonoma, pestering them with questions about their wonderful store and how it works.

Joan Wheelis rescued me and helped me think in new ways about this book.

Maxine Groffsky, my literary agent, and Jordan Pavlin, my editor at Knopf, are both essential to me for their keen intelligence about my work and their warm support. Doug Bauer is my sine qua non.

E
MILY TELEPHONED
, his older daughter. “Can you come get us?” she said. “It’s an emergency.”

As usual, she didn’t greet him, she didn’t say
hello
at the start of the call. And also as usual, this bothered him, he felt a familiar pull of irritation at her voice, her tone. But even as he was listening to her, he was focused on steering the truck around the sharp curves in the narrow road, around several small heaps of rock that had slid down the steep hillside: he was feeling the pleasure he always took in the way the slanted afternoon light played on the yellowed grass and reddened leaves left in the vineyards, in the way the air smelled. He kept his voice neutral as he responded. “When? Now?”

In the background, behind her, Mark could hear someone give a sudden
whoop
. Festivities, he thought. As ever. Eva’s face rose in his mind—his ex-wife. At the least excuse, there was a gathering at her house: to celebrate a birthday—reasonable enough; but also for a project completed, a team victory, a skill accomplished. You learned to ride a bike, you got a party thrown for you.

He was headed north on 128 to a small vineyard he thought his
crew should harvest tomorrow. He needed to check the grapes. But he could probably get Angel to do it if he had to. His windows were open. The noise of the rushing air made his daughter’s voice on the car phone sound distant.

If his younger daughter, Daisy, had ever called him because of an emergency, it would have been a child’s crisis—not making the basketball team, needing a ride somewhere that her mother or stepfather couldn’t provide. But with Emily, this emergency was likely to be at least slightly serious, an emergency in near-adult terms. Terms he might even be sympathetic with.

But she would be
taking charge
again, and this was something he and his ex-wife had agreed that she should be discouraged—no,
freed
—from doing so often. He cleared his throat. “Maybe I should talk to your mom,” he said. Yes. The approach to take.

“Dad!” she objected. He didn’t answer for a long moment, and as if in response to this, her voice had changed when she spoke again. She sounded younger: “Mom can’t talk right now. That’s why we need you.”

She wouldn’t be charmed. “Now?” she said impatiently.

“Now. Or, gimme ten or so.” He was slowing, and as he pulled into a turnaround by the roadside, the truck bounced and his tires crunched on the dusty gravel.

It could not be for overnight. He had plans. He had a date. He was going to get laid. “Okay, sunshine,” he said. “We’ll work it all out.”

She sighed again and hung up.

Twenty minutes or so later, when he pulled up at the curb in front of his ex-wife’s large Victorian house, the door opened before he hit the horn and his younger daughter staggered out onto the wide porch, carrying her sleeping bag, her pack an oversize hump on her back. Daisy was barefoot. Her long brown legs were exposed nearly to the crotch in cutoff jeans—legs that were beginning to look less like sticks and more like a woman’s, he noted. Emily came out the door after her, turned backward as if to fuss with something behind her.

Two pretty, dark, young women, one tall, one short: his daughters. He got out of the truck to go and help them. As he started up the walk, he saw Theo emerging from the house behind Emily. The little boy, not yet three, was carrying a brown paper grocery bag by its handles. Something stuck out of it—a pillow? a blanket? He spotted Mark and smiled. Now Emily took Theo’s hand to help him down the wide porch stairs. He paused on each one, and the bag plopped slowly from step to step behind him as he descended.

Mark met them on the walk. “Hey,” he said. He kissed each girl on her head. They smelled identical, a ladylike herbal perfume: shared shampoo. He took Daisy’s sleeping bag from her. “Theo!” he said, and extended his hand down to him. “To what do we owe this pleasure?”

“I’ll explain it all to you,” Emily called back. She had moved ahead of them down the walk, between the orderly gray-green procession of rosemary plants. She was tossing her stuff into the open back of the truck.

“So he’s supposed to spend the night too?” Mark asked Daisy. Theo was not his son. Theo was his ex-wife’s son, by her second marriage. He liked Theo. He was, in fact, charmed by him—he knew him well from various extended-family events—but he had never before been asked to babysit for him. And actually, no one had even asked.

Daisy shrugged. She looked, as she often did, sullen. Or evasive. Her face was narrower than Emily’s, her nose still slightly
too big on it—she was fourteen—her eyebrows darker and thick. She had shot up within the last two years, and now she was only a few inches shorter than Mark. She carried it badly, trying to hide it. Mark had worried when she was younger that she would be plain, which seemed to him an almost unbearably sad thing: a plain woman. Within the last six months or so, though, her face had changed and strengthened, and he saw that that wouldn’t be the case. That she might, in fact, be better-looking than Emily in the end, more striking. It had made him easier around her, he realized.

They had caught up to Emily, who said again, “I’ll explain it
later
.” She sounded irritated, as though she were the adult and he a nagging child. She took Theo’s hand and led him to the door of the truck’s cab.

Mark went around to the driver’s side. He opened his door and stood there looking across the cab’s wide seat, waiting for Emily to look back at him. She wouldn’t. Or she didn’t. First she was helping the little boy clamber into the truck; now she climbed up herself and was busy buckling him in. When she finally raised her eyes and met her father’s, he was ready. He lifted his hands. “Hey, Em,” he said. “You will admit—”

“Daddy, it’s an emergency. A real emergency.” Her eyes, he noted now, were red-rimmed, their lids swollen.

Theo looked over at him and nodded. “It’s a mergency,” he said, and inserted his thumb into his mouth with an air of finality.

Daisy squeezed in next to Emily, and Mark got in and started the truck. He pulled into the street. After nearly a full minute had passed, he asked, “So, the nature of this emergency is …?”

Feeding Dragons by Catherine Rose
Some Old Lover's Ghost by Judith Lennox
Death of a Rock Star: A Boy in the Band Novella by Frost, NJ
Merry's Christmas: Two Book Set (Amish) by Rohrer, Susan
(2003) Overtaken by Alexei Sayle
Jim Bowie by Robert E. Hollmann
The Eagle and the Fox (A Snowy Range Mystery, #1) by Nya Rawlyns
Falling For Crazy (Moroad Motorcycle Club) by Debra Kayn
Dances with Wolf by Farrah Taylor
The Trial of Fallen Angels by James Kimmel, Jr.
Our partner