Love Finds You in Frost Minnesota 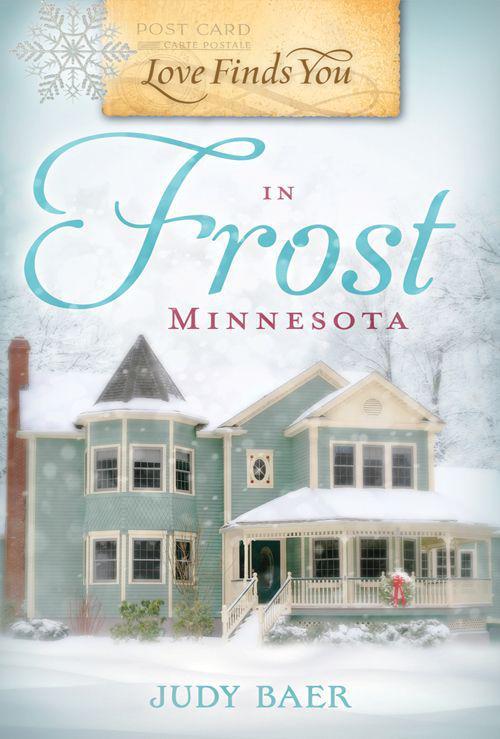 Love Finds You in Frost Minnesota

Summerside Press, an imprint of Guideposts (2013)

When Jack Frost returns home to Minnesota, he meets the town's newcomer. She's bubbly, beautiful, and his latest adversary.

Considering that her name is Merry Noel Blake and she was born on Christmas Eve, it's not surprising that Frost, Minnesota's newest resident, is crazy about the holiday. She has single-handedly convinced the entire town to help her turn Frost into a Christmas destination; there's a tableau of the stable in Bethlehem, a concert, many events at the church, and Merry's own holiday boutique.

Jack Frost has always tried to live down his whimsical name -- a gift from his playful parents -- and he does his best to deter Merry from making what he considers a kitschy mockery of the town and the season. But she believes that below Jack's frosty exterior is a warm heart -- and that she is the one to thaw it.

About the Love Finds You™ series:
The Love Finds You series features standalone inspirational romance novels set in real towns and cities across America. This is the 56th book in the series. 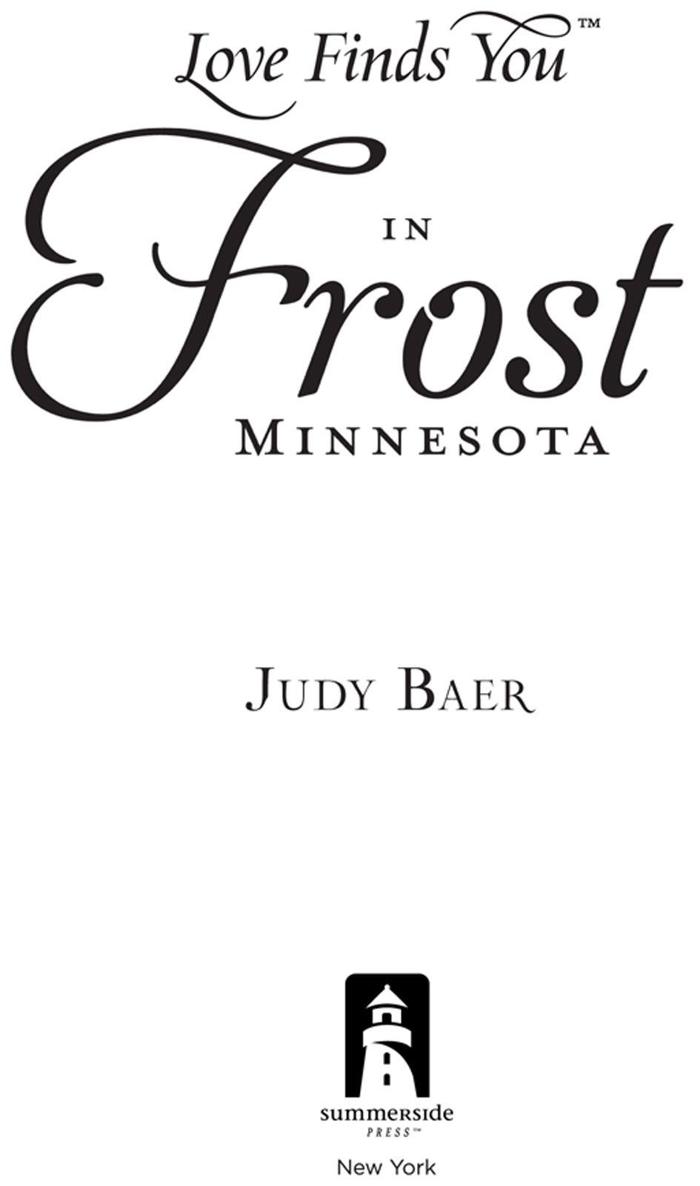 Love Finds You in Frost, Minnesota

Published by Summerside Press, an imprint of Guideposts

Summerside Press™ is an inspirational publisher offering fresh, irresistible books to uplift the heart and engage the mind.

This book, or parts thereof, may not be reproduced, stored in a retrieval system, or transmitted in any form or by any means, electronic, mechanical, photocopying, recording, or otherwise, without the written permission of the publisher.

Guideposts
,
Ideals
, and
Summerside Press
are registered trademarks of Guideposts.

The town depicted in this book is a real place, but all names are fictional except that of Charles S. Frost (May 31, 1856−December 11,1931), the architect after whom Frost is named. Any resemblances to any people living or dead are purely accidental.

For Josie, Keillor, and Quentin—Merry Christmas

Kudos to the real Frost, Minnesota, for being such a tidy and charming small town! 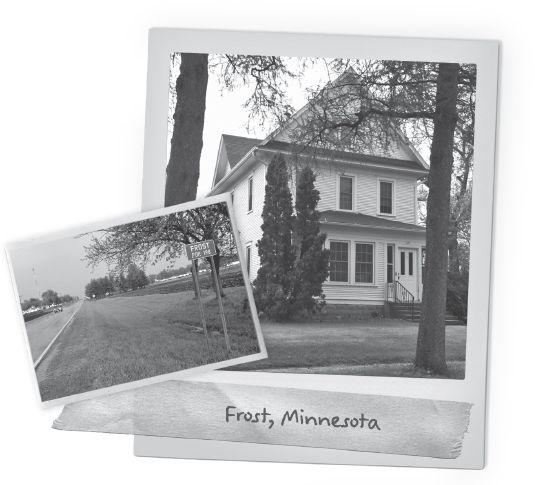 T
HE TINY TOWN OF
F
ROST IS SITUATED IN SOUTHERN
Minnesota. With fewer than 200 residents, it has a post office, library, several agricultural businesses, and three Lutheran churches. Frost was named for Charles S. Frost (1856–1931), an architect from Chicago who designed The Depot in Minneapolis/St. Paul, Chicago’s Navy Pier, the Navy Pier Terminal Building, and numerous other landmarks.

The town of Frost was platted in 1888, and the post office began operation in 1899. The majority of the settlers were Norwegian, and the town’s residents still enjoy Scandinavian traditions such as church
lutefisk
dinners at Christmastime. Though Frost is very real and lovely, the places and characters portrayed in this book are not. Still, I fell in love with the place during my visit, and I like to imagine all the wonderful people who must live there.

Merry Blake straightened the gold angel at the top of the Christmas tree and stood back to inspect it. She had the same curly blonde fluff of hair as the angel staring benevolently down at her, the same green eyes, and the same perpetually happy expression, as if Christmas joy were etched into her soul.

Twigs Merry had collected and sprayed gold glinted from between the branches of the fourteen-foot white pine adorned with metallic gold bows, balls, and ornaments. This was her finest yet, she decided, which said a lot, considering that she’d decorated more than a hundred and fifty trees in the past five years. Yes indeed, Merry’s Christmas Boutique was looking better than ever.

She checked on the fragrant spiced cider in the electric urn near the spiral staircase to see that it was warm. Her part-time helper would head for it first thing when she arrived. Abby Phillips was almost as crazy about Christmas—and cider—as Merry.

The door opened and a cascade of chimes exploded, the motion-activated reindeer began to play “Rudolph the Red-Nosed Reindeer,” and a raucous movement-sensitive Santa chortled “Ho, ho, ho.”

Upon hearing the auditory explosion, Merry turned to greet Abby. She was startled to see not her friend but a tall, broad-shouldered, elegantly dressed man with thick dark hair, brown eyes, and a frown that etched deep furrows in his high, intelligent forehead. He appeared to be a few years older than she, thirty-five to her twenty-eight, perhaps. Snow lay sprinkled across the shoulders of his black wool coat, and a gust of icy wind followed him inside. She shivered a bit in her Mrs. Claus red velvet skirt and fur-trimmed blouse.

“Welcome to Frost. May I help you?” Strangers didn’t often come through the streets of Frost, a tiny town in southern Minnesota inhabited by a large percentage of people with Norwegian and German heritages—except now, of course, at Christmastime, when her boutique drew people from as far away as Minneapolis, St. Paul, and even Sioux Falls, South Dakota.

“What
is
this?” The question was far from friendly, but the fellow’s scowling demeanor didn’t conceal his handsome features. His coat fell open to reveal black trousers and a cashmere V-neck sweater with a pristine white shirt beneath.

“This is Merry’s Christmas Boutique. Frost’s one and only Christmas store. We open on Black Friday and close January seventh, right after our clearance sale.” Merry smoothed her skirt and hoped she didn’t have straw from the Nativity sets in her hair. “Are you looking for a special Christmas gift? Stocking stuffers?”

He stared at her as if the synapses in her brain were made of peppermint bark. Disapproval oozed from every attractive pore. “Stocking stuffers? What kind of nonsense is that?”

“Nonsense? Don’t you like Christmas?” If not, what was he doing here in Frost, the town that had fully embraced Merry’s marketing concept and turned itself into a tiny Christmas village for almost two months every year?

“Has this place gone completely nuts?” Icicles dripped from his words.

“Candied pecans, perhaps,” she said through gritted teeth, determined not to allow him to fill the shop with his negativity. “They’re one of my best sellers. Would you like to try some?”

He ignored her. “Frost is nothing like the last time I was here at Christmas. Now there are Santas on every corner, reindeer and sleighs perched on every rooftop, and a weird talking Christmas tree by the post office that doesn’t shut up! The only thing that makes any sense is the life-sized Nativity at the church.”

“That’s my favorite too, but people think of Santas, reindeer, and elves at this time of year as well.” She snapped her fingers. “That reminds me—did you see elves as you drove through town? Abby’s husband, Charley Phillips, was supposed to put them up—hanging out of the trees, peeking from behind rocks, and the like. It’s very clever, and the children love them.”

His scowl deepened, and he looked as if he could use a little sugar boost.

Merry hurried to get him a cup of cider. She thrust it into his hand, and he stared at it suspiciously.

“It’s not poison, for goodness’ sake! Drink it. You look as though your blood sugar is dropping.”

“Who are you?” he asked, after a gulp of cider. “Where did you come from? The North Pole?”

Merry beamed at him, pleased with the suggestion. “I’m Merry Blake. I’ve lived in Frost for five years. I teach morning kindergarten in Blue Earth and work afternoons and evenings here, at least through the holidays. I substitute teach the rest of the time.”

He continued to gape at her as if she’d just arrived on the Polar Express, so she continued. “I’ve always loved Christmas, so when I had a chance to buy this place—for little or nothing, I might add—I grabbed it. It’s the perfect Christmas house. Every year I turn it into a boutique. I also do high teas and luncheons for groups of ladies and act as an occasional bed-and-breakfast for people who come to town to visit. I had no idea the store would take off like this. Now I earn more in two months than I do teaching. I’d never quit that, however. I love little kids.”

She saw his eyes glazing and bit her lip. She was so happy with how things had turned out that it was hard for her
not
to talk about it. Teaching children, a lovely home, and the opportunity to dwell on Christmas all year long and to seek out people to enjoy it with—what could be better? Because she was an only child of only children, big family Christmases were the stuff of magazine covers and store windows until she began to make her own.