Voice of the Lost : Medair Part 2 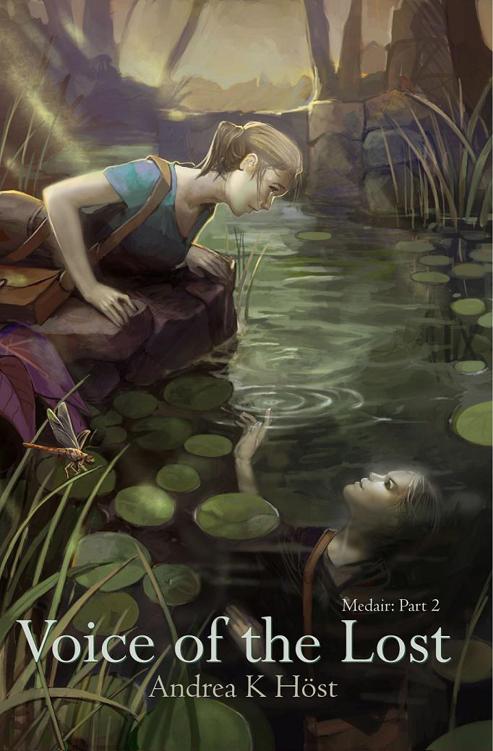 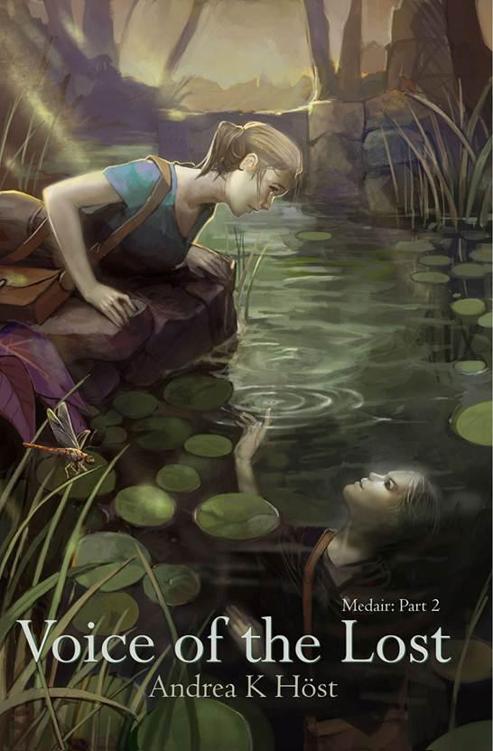 Voice of the Lost

Map can be found at
www.andreakhost.com/p/etc.html

All characters in this publication

are fictitious and any resemblance

to real persons, living or dead,

The conclusion of the story begun in "The Silence of Medair".  A glossary of terms can be found at the end of the book.

Medair an Rynstar wants only to leave.

Five hundred years after the Empire she served fell before the Ibisian invasion, Medair has betrayed her Emperor's memory by helping the descendants of the invaders.  She knows she will be reviled, that to thousands she is hero-become-villain.  Her one goal is to return to the hidden cave where she slept out of time, and hope that she wakes in a world where the name Medair an Rynstar has been forgotten.

Assassins, armies, and desperate magic complicate Medair's plan of escape, leading her inexorably to face the very people her choice has cost the most.  She has learned that you can never to return to your past, or run from the consequences of your actions, but can she find a way to live in defeat?

Jolted from sleep, Medair an Rynstar, displaced herald of a fallen Empire, opened her eyes in time to see a wide cushion descend.  Brocade and too many inches of stuffing made it impossible to breathe, and she tried to turn her head, for a moment too astonished for more.  Was it Medarists already, come to punish her for not being the hero they had expected?  For the crime of not hating enough?  Then fear overcame shock and she writhed against the hands which held her.  Unable to free her wrists, she reared back and kicked.

Her feet flailed at nothing, then someone caught hold of her left leg, pinning it down.
At least three attackers
.

Medair had known this would come, had known that anyone loyal to the old Atherian Empire would hate her unrelentingly for aiding the descendants of the Ibisian invaders, and would not think five hundred years of interbreeding and the threat of indiscriminate slaughter enough to muddy the waters of enmity.  But she had not anticipated assassins the same afternoon she had given up the Horn, and certainly not while she was shut away in the apartments of an Ibisian of the highest rank: Cor-Ibis.

Panicked by the tightness growing in her chest, she cried out for help, but the cushion muffled sound as readily as air.  Despite her forestalled attempt at suicide a few decems earlier, Medair did not find being murdered an acceptable solution to her problems, and struggled to think her way out of this trap.  The only set-spell she'd prepared in weeks was the fire-light charm, but the finger snap release produced no response.  It had lapsed.

Bright spots began to speck the blackness before her eyes, but still she looked for escape, going limp for a count of five in hopes of lulling them.  Only the hold on her legs relaxed, but that was enough, and she snapped her feet up, this time curling almost double in her effort to strike at her captors.  Muscles burned with strain, but she came into contact with the arm of the person who held her right wrist and pushed out with her foot, succeeding in thrusting that one backward.  Something broke – jostled from the table beside her bed? – and the pressure on the cushion lapsed, allowing her to steal a single breath.  But no more.

"
Hold
her!" one ordered in an angry whisper.  It was a voice she knew.  A woman's voice, muffled but familiar, made outlandish by circumstances.  Jedda las Theomain.

That did not make sense.  Keris las Theomain was Ibisian, a friend of their ruler, Kier Inelkar, and had been with Cor-Ibis' group during his search for the stolen rahlstones which had led to his path crossing Medair's.  The Keris knew perfectly well Medair had given the rahlstones and then the Horn of Farak, the very weapon Medair had sought to destroy the Ibisian invaders, to their descendants.  With the city under siege, why were the people she had betrayed her past to help trying to kill her?

Writhing impotently, Medair struggled for another breath.  The third assailant was practically sitting on her feet.  She couldn't begin to guess why Jedda las Theomain, why any Ibisian, would sneak into her room and attack her.  It was everyone
else
who had reason to kill Medair an Rynstar.

A tap on the door, then the voice of Cor-Ibis' ward:

"Ileaha!" Medair shouted, or tried to, struggling against a rising wave of grey.  The effort left her chest stretched and empty, and did not seem to have produced noise to rival an infuriated mouse.  Ileaha tapped on the door again.

"Something broke.  Are you all right?"

A strained silence was all the answer she had, while Medair struggled to suck air through the scratchy brocade.  Then, a click.

The weight sitting on Medair's feet was gone in a bound.  There was an indrawn breath, a scuffle, and the door slammed shut.  But Ileaha did not seem to be easy prey.  Something else fell, there was more scuffling, then Ileaha's voice rose, urgent and imperative:

It seemed, from the grey place Medair was sinking into, that Ileaha did not wait for the arrival of the special guards assigned to Cor-Ibis, but dashed toward the person wielding the cushion.  The bedside table collapsed as two bodies landed upon it.  Medair, the cushion wrenched away from her face, gulped air.

The man holding her left wrist was Ibisian, his bleached skin and white hair showing no hint of Farakkian blood.  Blue eyes narrowing, he let go only to draw a knife.  Medair barely got her hands up before he slashed toward her throat.  The sturdy fabric of her uniform gave her some protection, but red lines opened across the back of her right wrist and the palm of her left.  Then a splintered table leg hurtled past Medair and hit the man in the face.  His free hand went to his cheek, but he again thrust at Medair, frantically now, as if killing her were more important to him than his own life.  Medair snatched up the abandoned cushion as a makeshift shield, and feathers puffed into the air.

Ileaha, ash blonde hair flying, left Jedda las Theomain crumpled on the floor, and launched across the bed.  She hit the man feet first, the knife scoring her boot before it clattered away.  She landed on top of him and had him face down with hands wrenched behind his back in one swift whirl.  The third intruder tried to make his escape and staggered into the arms of Liak ar Haedrin and another Farakkian woman in the Cor-Ibis livery.

Suddenly the room was full of people.  Guards, maids, Avahn.  Medair, head swirling, dropped the gutted cushion.  She picked a feather from the roof of her mouth, and tried to smile at her rescuer.  It seemed a better option than bursting into tears.

"I really can't imagine you as a secretary, Ileaha," she said, voice thin and creaking.  "I'm glad you decided otherwise."

"So am I," Ileaha replied, staring at Jedda las Theomain.  There was no sign of movement and the woman's long limbs lay in awkward positions.  Then Ileaha glanced at Medair and her eyes widened.  "He did cut you!"

"Vel will bring bandages," Avahn said.  Cor-Ibis' heir made a brief, commanding gesture to someone at the door, then nodded at Ileaha with approval.  "I think I've lost any right to deride your weapons-skill, 'Leaha."

Ileaha lifted her chin, then nodded back, adding only the faintest searching glance to show that she had not quite fully transitioned from the doubt-filled girl Medair had met at an inn in Kyledra.  A mixed-blood minor mage raised as ward of a family dominated by powerful full-Ibisian adepts, she was unlikely to quickly forget Avahn's careless taunts, or the weight of charity driving her toward a dutiful but dull career.  Saving Medair was a large stride into the profession of her choice.

"Show me your hands," Avahn ordered, and produced a sturdy kerchief when Medair unclasped her injured wrist.  It was not enough to stem the bleeding, but it at least stopped her dripping, freeing him to turn his attention to the man on the floor.

"Sit him up." He studied the captive, an Ibisian of forty or so years, already withdrawing behind a mask of icy control.  "Who are you?"

The man just sat there, face set.  Avahn's eyes flashed, but he reined himself back, drawing on the Ibisian calm supposedly bequeathed by 'cold blood'.

"Do you know him, Liak?" he asked, turning to the gathering at the door.

"No, Kerin," the red-headed woman replied.  "This one is Felden, of the household since a year past, but I have never seen this other before."

"Ah."  Avahn's gaze rested on the young man bracketed by Kel ar Haedrin and her companion, then he turned to look at Jedda las Theomain's body.  "Search them."

This was swiftly accomplished and revealed only that Jedda was definitely dead.  Ileaha pressed her lips together at the news, but didn't otherwise react.

"Did they speak to you, Medair?"

"No," Medair replied, tightening Avahn's now soaked kerchief around her palm.  "I'm not altogether sure why an Ibisian would be trying to kill me."

"It had to be done," said the man who had cut her, his voice precise and unapologetic.  "Keris las Theomain saw clearly the threat you pose.  It will not happen.  You can be sure of that."

"What threat?" Medair asked blankly, but the man just tightened his lips.

"Take them somewhere less intrusive," Avahn ordered.  "And clear the door.  Where is Vel?"

"Here, Kerin."  An elderly Ibisian woman came forward, a collection of salves, needles and bandages neatly laid out on the tray she carried.

Avahn left Medair to the ministrations of the attendant, while Jedda las Theomain's body was removed.  The cut on the back of Medair's right wrist and hand wasn't bad, but her left palm was scored deeply across the base of the thumb.  The woman called Vel tended it with a mixture of stitches and a casting to hurry the healing.  Medair wondered why Jedda had started with a cushion instead of the knife, and tried not to picture that awakening.

"There will be no loss of function, Kerin," the attendant told Avahn when he returned.  She wrapped an injury which now looked days old.  "It did not touch the tendons."

"That's as well."  Avahn glanced around the room, at blood-specked feathers and broken furniture.  "We guarded you poorly, Medair.  We thought you would be at risk from the Hold, or from Medarists, not our own kind."

Chasing Before by Lenore Appelhans
The Picture of Nobody by Rabindranath Maharaj
The Book of Pirates and Highwaymen by Cate Ludlow
Moondance Beach by Susan Donovan
The Rotation by Jim Salisbury
Beyond the Rift by Watts, Peter
Game For Love: Game On (Kindle Worlds Novella) by Cat Johnson
Stirring Attraction by Sara Jane Stone
The Wrath Of the Forgotten by Michael Ignacio
Lost Melody by Roz Lee
Our partner