The Inheritance (The Donatelli Series) 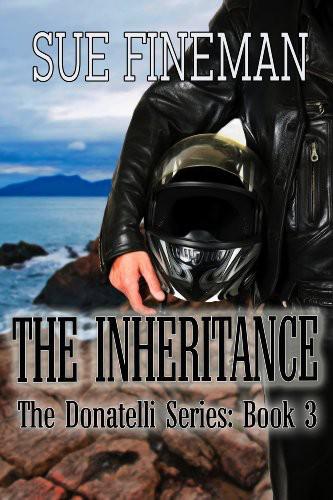 Blade Banner inherits his grandfather’s estate, but it won’t all be his until he marries. He’s been alone since he was fifteen and has never had a long-term relationship. What woman would want to marry a man whose best friend is his Harley? He promised his grandfather he’d help maintain the integrity of the family shipping business, but he can’t get his hands on the company stock until he finds himself a wife. Another company wants to take over and gut the company, but without the stock, there’s nothing Blade can do to stop the take-over.

After a bitter divorce, Maria Donatelli, mother of four, gets roped into working with Blade on a house plan. From the beginning, sparks fly between them, and even though she tries to keep her distance, she can’t stay away from him. She doesn’t tell him she can hear his thoughts, a gift she inherited from her mother.

Blade tries to convince Maria to marry him to help him claim his entire inheritance, but he can’t tell her what she longs to hear—that he loves her and wants a real marriage. Without those words, Maria won’t even consider another marriage.

But Maria isn’t Blade’s only problem. People are dying, and he’s sure the deaths have something to do with his inheritance. He’s afraid they’ll come after Maria and the kids, and he’ll do everything in his power to make sure that doesn’t happen.

B
lade Banner booted up his computer and sipped his morning coffee. He’d been up half the night working on this project, and if he didn’t get it finished and delivered by the end of the day today, he wouldn’t get paid.

The phone rang. Blade stared at the clock on the wall. Six o’clock in the morning. The client wouldn’t call him at this hour, and it was too early for telemarketers or pranksters. He grabbed the phone. “Yeah?”

“Is this Blade Michael Banner?” a man asked.

“That depends. If you’re selling something, I’m not interested.”

“This is Colin Jacobs, Attorney at Law in Manhattan.”

“I guess people in New York can’t tell time,” he muttered mostly to himself.

“It’s nine here, and I wanted to catch you before you left for work.”

“Yeah, okay, you caught me. What’s this about?”

“Was your father John Edward Banner?”

“This isn’t about your father. He is deceased.”

Blade sucked in a breath and blew it out. He hadn’t seen his old man since he was five, and he had nothing but contempt for the man who’d beaten him and then abandoned him. “I guess that explains why I didn’t get any Christmas cards.”

“Your grandfather would like you to come to New York to meet with him.”

Blade froze. “What grandfather?” Nobody told him he had a grandfather.

The attorney said, “I’ve taken the liberty of booking a first-class seat for you for this afternoon. I’ll have a limo waiting at the airport.”

Grandfather?
First class
?
Limo
? Where was this grandfather when Blade was growing up, and why did he want to see him now? And who in the hell did this shyster think he was, taking ‘the liberty’ of booking a seat before he bothered to ask Blade if he wanted to come. “If my grandfather wants to speak with me, give him my phone number and remind him of the three-hour time difference. And tell him I have other plans for this afternoon.” Blade dropped the receiver in the cradle.

Five minutes later, the phone rang, and he knew it had to be the attorney again. Blade let it ring three times before picking it up. “Blade Banner.”

“Mr. Banner, have you heard of the Banner-Covington Shipping Corporation?”

Who hadn’t? It was one of the biggest shipping companies in the world. “What about it?”

“Your grandfather is Edward Banner, the former CEO of the company. He’s dying, and you are the only living member of his family.”

When Blade found his voice, he said, “Can you make that ticket for tomorrow morning?”

“Yes, sir. I’ll have my secretary call you with the details.”

Blade spent the next hour researching the corporation and the Banner family on the Internet. John Banner came to this country from England in 1760 with his son, Martin. Martin ran a shipping company in Boston, which he later bought. A few generations later, they’d lost it all, and James Banner moved to New York City, where he studied law and eventually became a distinguished judge. His youngest child, Edward Banner, was born in 1918.

Mary Elizabeth Covington Banner, the only child of the Covington shipping family, had passed away four years ago. She and Edward Banner had been married for sixty-eight years. They had three sons. The oldest became a priest. Father Michael died in Africa in 1980. The middle son, Matthew, died in a plane crash in 1992. And the youngest was Blade’s father, John Edward Banner, who passed away nearly twenty years ago from liver failure. He drank himself to death. No surprise there.

With the merger of the two families and their fortunes, the Covington shipping business became the Banner-Covington Shipping Corporation. Edward Banner’s net worth now hovered around a half-billion dollars, and the old man had outlived his entire family, all but his only grandson, Blade Michael Banner, who stared at the computer screen in stunned disbelief.

Blade finished the project and delivered it to the client late that afternoon. They had another assignment for him, but Blade didn’t take it. He had no idea how long this business in New York would take.

Early the next morning, Blade strapped himself into a first class seat for the flight to JFK airport in New York. First class was a whole lot more comfortable than coach, and he decided he’d go first class all the time from now on.
If
someone else bought the ticket.

Hours later, a uniformed limo driver met him at the airport and drove him through the gates of a massive brick home. A butler walked out to meet him, and a man took Blade’s bag and disappeared into the cavernous house.

As he walked through the front door, Blade knew he should have gone shopping for clothes before he left Seattle. This was a formal home with uniformed servants, and he wore jeans and a well-worn leather jacket. He felt out of place here, like Jed in the
Beverly Hillbillies
.

The house reminded him of a hotel, with a winding staircase in the grand entry that curved up three stories. The butler showed him to a suite on the second floor. The sitting room had dainty European furniture that might break if someone actually sat on it, the bathroom was bigger than his entire house in Gig Harbor, and the bed could sleep six people. Too bad it didn’t come with a woman.

The butler bowed slightly. “Mr. Banner will see you in thirty minutes.”

Blade unpacked a few things, ran his electric razor over his face, and changed into slacks, loafers, and his best pullover sweater. He’d left his only suit at home.

The butler returned to escort Blade to his grandfather’s room, down the hallway on the other side of the house. The room was massive and the furnishings ornate. It looked like something out of an old gothic movie, beautiful and creepy at the same time.

“Mr. Banner, your grandson is here to see you,” the butler announced.

The nurse backed away from the bed and Blade got his first look at his grandfather. He was old and wrinkled, but the blue eyes he stared out of were the same eyes Blade saw in the mirror every morning. He felt an instant connection to the wizened old man lying in the big bed.

Blade walked to the side of the big four-poster bed, where the old man stared at him. “So you’re my grandson.” He scanned Blade’s body and rested again on his eyes. “You look like my son, Matthew. How old are you?”

“Thirty-nine, and you already knew that.”

The old man’s face crinkled into a smile. “I wish I’d known about you when you were a boy,” the old man said gently. “What kind of work do you do?”

“Contract work when I can get it, mostly technical writing and training seminars.”

“You have a college degree?”

The old man closed his eyes and breathed deeply, obviously in pain. “They tell me I’m dying.”

His grandfather’s eyes opened. “So am I, but nobody lives forever.”

The Gift: A Novella by Sandra Marton
No Horse Wanted by Melange Books, LLC
Star Wars: The Last of the Jedi, Volume 3 by Jude Watson
Captive of the Deep by Michelle M Pillow
The Hills is Lonely by Lillian Beckwith
The Whiskey Baron by Jon Sealy
Valdemar 05 - [Vows & Honor 02] - Oathbreakers by Mercedes Lackey
Resist (Songs of Submission #6) by Reiss, CD
The Summons by John Grisham
The Reluctant Knight by Amelia Price
Our partner