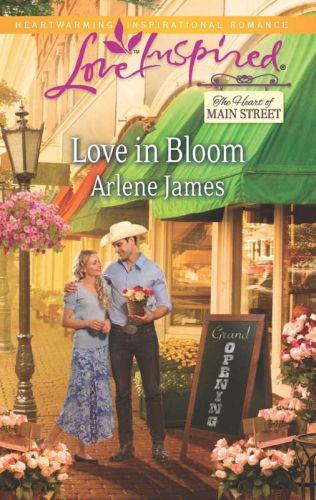 Lily Farnsworth can thank a mysterious benefactor for the chance to open her own flower shop in Bygones, Kansas. But Tate Bronson is the biggest challenge the relocated Boston attorney has ever faced. Forget about tossing out the welcome mat—the handsome widowed rancher seems determined to keep Lily at arm’s length. As everyone buzzes over the identity of the anonymous donor, Lily’s doing her part to revitalize the struggling town. With the help of Tate’s little girl-turned-matchmaker, can she create a garden of community and love deep in the heart of Kansas…and one special man?

The Heart of Main Street: They’re rebuilding the town one step—and heart—at a time

Tate paused, turned, walked back up the stairs and wagged a finger in Lily’s face.

He’d intended to say something clever, something witty and smart, but when he saw her standing there with that relaxed, happy smile on her face and those deep blue eyes shining behind the lenses of those cute round glasses, every word, every thought went right out of his head except one. He swept his arm around her, folding her close with the crook of his arm. Sliding his free hand over her shoulder blade, he tilted his head and kissed her. This was no accidental kiss.

This was about the woman who made him smile.

The Heart of Main Street: They’re rebuilding
the town one step—and heart—at a time

says, “Camp meetings, mission work and church attendance permeate my Oklahoma childhood memories. It was a golden time, which sustains me yet. However, only as a young widowed mother did I truly begin growing in my personal relationship with the Lord. Through adversity He has blessed me in countless ways, one of which is a second marriage so loving and romantic it still feels like courtship!”

After thirty-three years in Texas, Arlene James now resides in Bella Vista, Arkansas, with her beloved husband. Even after seventy-five novels, her need to write is greater than ever, a fact that frankly amazes her, as she’s been at it since the eighth grade. She loves to hear from readers, and can be reached via her website,
www.arlenejames.com
.

“For I know the plans I have for you,” declares the Lord, “plans to prosper you and not to harm you, plans to give you hope and a future.”

I dedicate this book to my hometown of Comanche, Oklahoma, where good people still do good things for one another every day and faith is still a way of life.

Special thanks and acknowledgment to Arlene James for her contribution to
The Heart of Main Street continuity.

P
lacing a folder on her desk, Coraline Connolly looked around at the faces of those she had summoned to her office. Tate Bronson shifted his weight from one foot to the other, feeling much like the boy he had once been, waiting for the ax to fall here in the office of the principal of the school. This time, however, he did not fear that he had been caught pulling pranks on his classmates or carving his and Eve’s initials into the memorial tree at the corner of Bronson Avenue and School Drive. This time his concerns were not anything as sweetly trivial as losing his privileges at recess or writing extra essays. All here knew that the town they loved teetered on the very edge of disaster.

The problems had begun the moment that Randall Manufacturing had closed its doors, throwing seventy percent of the community’s employees out of work. Overnight, Bygones had gone from being one of the most successful small towns in Kansas to a community in decline.

Oh, the townsfolk were still friendly and salt-of-the-earth, willing to give the shirts off their backs to friends and neighbors in need. The original Bronson Homestead, now home to the public library, a spacious park with a sizable playground, charming gazebo and shady pond, still welcomed visitors with its sylvan peace. The lazy streets where children played and houses stood in safety with doors unlocked were still realities of the friendly ambience of the small town. Sadly, however, what they had once taken for granted in Bygones was no longer secure.

In the months since the closing of Randall Manufacturing, other businesses had shuttered. Homes had been abandoned and repossessed as people moved out in search of work. Mayor Langston had even been forced to shut down the butcher department in his grocery store. With revenues dropping like a lead weight in a pail of water, the city had been forced to lay off personnel and scale back services. When the bank branch had closed, the whole town had known that it was in real trouble. Tate couldn’t help wondering if Robert Randall truly realized what he’d done to this community when he’d shuttered his aerospace manufacturing plant.

Miss Coraline, who at sixty had been a fixture at the school for over thirty years, had been deeply disappointed because the annual alumni banquet had been called off due to a lack of funds. Canceling the alumni banquet was the least of the problems for the school, however. Tate very much feared that Coraline had gathered this diverse group today—arguably now Bygones’ most influential citizens—to announce that the school would close entirely, with the county absorbing its students.

As if reading his thoughts, Coraline stood behind her desk and pulled herself up to her full height, which must have been all of an inch over five feet, and said, “You must be wondering why I’ve called you all here.”

Mayor Langston, seated next to old Miss Mars, stacked his hands atop the curved head of his cane and replied, “I hope for good news, but I confess that I expect the opposite.”

“We’ve had nothing but bad news for months now,” Joe Sheridan, the chief of police and an ex-marine, pointed out with a sigh.

“Easy for you to say,” muttered Elwood Dill, proprietor of The Everything, the town’s most successful retail business. “Your services never go out of demand. I have people buying gasoline one gallon at a time now and eating candy bars for dinner.”

“You’re giving away as many gallons of gasoline and hamburgers as you sell, Elwood, and don’t you deny it.”

Elwood shrugged, and Tate smiled to himself. Elwood and his wife might be a bit unconventional, but like almost everyone else around Bygones, they were good people. The question was if the town founded by Tate’s great-great-grandfather, Paul Bronson, and his brother, Saul, would still be around for these good people or if it would become another of the many ghost towns littering the Kansas plains. Tate looked to Coraline Connolly, who had always been a voice of steady reason in the community.

“Answered prayer, Tate,” she announced, smiling as she held up a large empty envelope stamped as Certified Mail. “I do believe it’s answered prayer.” She flipped open the folder on her desk and spread out its contents. “I received this two days ago, and it’s taken me a while to fully understand all of the ramifications. I want you all to know that I consulted an attorney about this before I called you here.”

The mayor picked up one of the papers and began to read, while Miss Mars did the same with another. Miss Mars reported first.

“A holding company is purchasing the entire south side of Main Street!”

“All those empty stores that are now in receivership?” Eversleigh queried, obviously perplexed.

“And updating them!” Miss Mars went on, continuing to read.

“Whatever for?” Joe Sheridan asked.

“New businesses,” Mayor Langston answered, a note of awe in his tone. “In the very heart of Main Street.”

“The new businesses we choose to bring in,” Coraline said, pressing her hands flat upon the desk, “with the grants funded by an anonymous benefactor.”

“I don’t believe this,” Dale Eversleigh exclaimed, all but snatching the paper from Mayor Langston’s hands.

“Are you actually saying,” Joe demanded, seeking clarification, “that this is what we’ve been praying for?”

They had been praying, Tate knew. They’d held many a prayer meeting at the Bygones Community Church these past months. Tate had attended none of them, but he knew well what had been said. He knew, too, that God often failed to hear or answer prayer.

“Hold on, now,” he said, determined to be the voice of reason. “Who is this benefactor?”

Coraline shook her head. “I don’t know. Whoever it is insists on anonymity.”

“But why do this for Bygones?”

“I can’t answer that, either, but it must be someone with a connection to the town. We can’t be the only ones who love this place. I keep thinking that it must be a former student. Otherwise why send all this to me? All I know for sure, though, is what’s in these papers.”

Tate thought about that. The school was small. This two-story redbrick building housed all twelve grades and kindergarten, but hundreds of students had passed through its hallowed halls in the time Miss Coraline had been here. Most had now moved on.

“How do we know it’s legitimate?”

“An account has been set up,” Eversleigh reported, looking up from the papers, “and there’s an email address for consultation. All we have to do is put together a committee, set parameters for the grants, take applications, make our choices and apprise our benefactor of them. The monies will then be released to the recipients.”

“The holding company will take care of preparing the shops to accommodate the needs of the businesses that we choose,” Miss Mars reported.