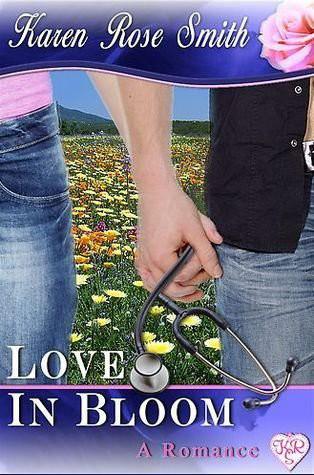 This is a work of fiction.  Names, characters and incidents are either the product of the author's imagination or are used fictitiously.  Any resemblance to actual events or persons, living or dead, is entirely coincidental.

The breeze blew Paige Conrad's chin-length brown hair across her cheek as she stood in the gravel lane beside her car.  She couldn't take her eyes off the superbly built man cutting diagonal swipes across the wide lawn behind his home.  He certainly didn't look as if he'd been in an accident.

Perspiration molded his shirt to his body as he drove the riding mower.  He wore the plaid cotton open down the front, and the material flew out behind him on the turns, teasing her with glimpses of a strong bronzed chest--

Suddenly, out of nowhere, a furry, smelly, black and tan animal leaped up and pushed Paige against the car.  She didn't have time to scream as her hands came up to protect her face.  Pictures flashed through her mind.  Pictures of lions roaming the veld.  Searching for their next meal.  Her hands shook.  Her whole body trembled.  Her legs didn't feel as if they'd hold her up...

A wet, sloppy tongue licked her chin.  She took a breath.  A lion would not be licking her face.

Paige peeped through her fingers.

The dog's ears pricked up.  With his paws still on her shoulders, he stopped licking and cocked his head toward the strong baritone.

Afraid to move in case sudden motion would change the dog's friendliness to a nip or bite, Paige stood still and concentrated on her breathing as the buzz of the mower ceased and the voice came closer.

The dog moved aside and sat at Paige's feet.  She closed her eyes again and took a final, deep, tremulous breath of relief.

"Are you all right?"

Paige thought she'd steadied her racing pulse.  But at the sight before her, it galloped again.  The flaps of Clayton Reynolds' shirt gaped open and a hard, muscular, hair-covered chest blocked her field of view.  This was not the way she'd envisioned the two of them meeting.

He backed up to offer her his hands and she realized she was still slumped against the car.  Automatically she reached for his grip.  He was as strong as he was tall.  She felt heat and calluses and a strange sensation as she looked at him at close range.

His black hair was shaggy and thick as if he had no interest in the latest cut.  Yet it was inordinately attractive when paired with his firm jaw and high cheekbones.  He looked rugged and capable of doing anything he tried, mowing down any obstacle in his way.

Few men had ever made her take a second look.  In the foreign countries where she'd traveled and worked with her parents, getting involved had been a cultural taboo.  When she'd attended med school in the States, she'd been too busy to look or to care.  Clayton Reynolds and his piercing green eyes demanded a second look, and a third.

"Are you all right?" he repeated.

She pulled in a bolstering breath and smelled fresh-mown lawn and man.  "I'm fine.  He just knocked the air out of me."

"I'm sorry if he scared you.  He's overly friendly but harmless.  By the way, I'm Clay Reynolds."  He released his hold on her.

Her knees still wobbled a little from her scare.  At least she assumed it was from the scare.  "Paige Conrad.  I'm taking over Doc Janssen's practice while he recuperates."

The German shepherd suddenly flopped at her feet and rolled over so she could rub his stomach.  She stooped, brushing the soft fur gently.  Shep's paws spread farther apart.  Paige laughed, a sound that surprised her.  In Africa, there hadn't been much to laugh about.

"He's getting what he wants already.  He has a knack with women," Clay said with wry amusement.

Paige's English boarding-school upbringing left her at a disadvantage, especially on a casual basis with American men.  She'd discovered that fact in med school.

Not knowing exactly how to respond to Clay's comment, she patted Shep's stomach, straightened, and pushed her hands into her jeans pockets.  "Knock them over, then fall at their feet?  That sounds like a tribal mating ritual."

"Doc told me about you."  Clay's eyes swept over her in an appraising male way.  "He said you'd been out of the States for a few years.  I didn't know you were a young doctor.  You haven't been around when I've mown Doc's lawn."

Paige felt embarrassed by Clay's perusal, though it was subtly appreciative rather than leering.  She glanced toward his home, a two story farmhouse that looked many decades old, yet sturdy and well-kept.  "Sometimes I get tied up in the office into the evening.  Doc misses doing the yard work himself."

Clay hooked his thumb through his belt loop.  "He'll be back at it soon.  Doc's a tough old bird.  I predict he'll be tending his irises and entering his roses in the flower show at the end of the summer."

Clay was the first person Paige had talked to who didn't think that Doc would be laid up for months.  "I try to keep him from doing too much.  That's important only two months after bypass surgery.  But he'll be able to do more and more as weeks go by."

Clay smiled again.  "C'mon inside.  I have iced tea in the fridge."

"Iced tea sounds good."  Paige was thankful Clay was friendly.  That would make her request easier.  She'd found mostly friendliness and welcome in Langley during the two months she'd been back in the States.  Doc had always told her this part of Maryland was noted for it.

As she passed the flower bed along the front porch, she stopped to take in a whiff of hyacinths.  Bending, she reverently touched the petal of a daffodil.  "This flower bed's beautiful.  Those are candytuft in the front, aren't they?"  The budding green border would soon be alive with lacy, snow-white flowers.

"You know your flowers."

She laughed again.  "How can I know Doc and not know flowers?  Actually since I've been here, I found out I really enjoy working in Doc's gardens.  I planted the two gardens out front so they'll bloom summer and fall.  There's something about digging in the earth and having the sun on my hair that's...soothing."

Clay propped one booted foot on the first porch step and rested his hand on the white banister.  "How long have you known Doc?"

"Practically all my life.  He and my dad were friends in med school.  He's always been sort of a cross between an uncle and a grandfather."  She wasn't here to discuss her background but to seek Clay's help with a patient.  Taking another appreciative whiff of hyacinth, she said, "I love the beginning of May when gardens come alive."

He said it as if he'd experienced a rebirth himself.  She looked into his steady green eyes and thought about her own need for renewal--her reason for coming to Langley.

They entered the old farmhouse and cooler air greeted them from inside.  The rooms looked freshly plastered and painted.  Paige wondered if Clay had done the work himself.

She followed him through the living room with its stone fireplace, patterned rugs, and tweedy blue furniture, to the large country kitchen.  The oak cabinets and granite counter added to the warmth of the sunshine pouring in through the double windows over the sink.

She ran her fingers over the back of one of the oak chairs sitting at a round pedestal table.  "This is beautiful workmanship."

"A fellow I know in Westminster makes them.  All hand- crafted."  Clay went to the refrigerator.  He nodded to the cabinet over the counter that divided the working area of the kitchen from the dining area.  "Glasses are up there."

Opening a stranger's cupboard didn't seem so strange.  She was used to packing up, moving on, settling in a village for a short time, using whatever was at hand.  She took two glasses and set them on the counter.

As Clay poured the iced tea, his eyes met hers.  Her heart skipped a beat.  She took the glass he offered and sipped at it, forcing herself to concentrate on her reason for being here.

Moving to the table, she sat down.  Shep came over and lay down at her feet.  "You're probably wondering why I'm here."

Was he flirting with her?  She smiled tentatively.  "Not exactly.  I came to ask a favor."

"Does Doc need more help around the house?  I know he has problems with that one rain gutter with all those trees close by--"

She loved Doc's log home in the woods.  "No, it's not Doc.  I'm concerned about one of his patients, Ben Hockensmith."

"He was in an accident about five months ago.  He was riding his bike along the highway when a car hit him."

Clay's eyes lost their sparks of humor and became opaque.  She couldn't tell if he'd heard about the accident or not.  He folded his hands in front of him and waited for her to continue.