Read Love in the Balance Online

Love in the Balance 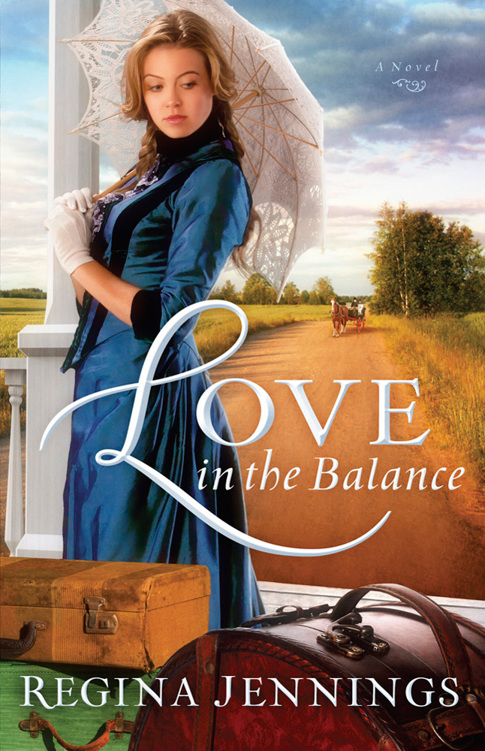 The internet addresses, email addresses, and phone numbers in this book are accurate at the time of publication. They are provided as a resource. Baker Publishing Group does not endorse them or vouch for their content or permanence.

Author is represented by Books and Such Literary Agency

To my sisters,
who loved me enough
to spend their vacation touring libraries.
Trina, Becky, Meena, and Cara—
I owe you a shopping trip.

The pew creaked as another sinner rose to unburden her troubled soul. Molly Lovelace twisted around on the slick wooden bench, bunching her tiered silk skirt against her mother’s, and watched as Louise Bradford stood. Bother. As if she had anything interesting to confess.

“After all God has done for me, I still can’t live in holiness. This week I harbored thoughts of impatience toward my husband.”

Molly’s transgressions, on the other hand . . .

Leaning forward to see around her father, Molly caught Bailey watching her intently. Her pulse quickened. With all the people trying to make decisions for her, she couldn’t afford a misstep, but she hadn’t expected to lose her heart so completely. What did Bailey Garner have to offer? Nothing, by her father’s reckoning. If only his pockets were filled out as nicely as his homespun shirt.

Molly’s sigh earned a stern glare from her mother. She bowed her head, hoping to appear sorrowed over Mrs. Bradford’s tedious list of near sins. How long would the woman ramble on? Bailey was waiting.

Every Sunday for the past year Bailey had escorted Molly to Lockhart, where she boarded for her job at the courthouse, but somehow on the twelve lonely miles between the Texas towns of Prairie Lea and Lockhart, Bailey’s skills as a surrey driver diminished. For a cowboy, he let the horse wander off the road with surprising frequency, often failing to get the beast under control until it reached a sheltered grove out of view from the road.

That spot held a special place in Molly’s heart. The bittersweet kisses shared between the thwarted lovers fueled her imagination, but until Bailey could keep dumplings on her table and silk stockings over her toes, she had to refuse his proposal. Her parents expected more.

But no one had ever delivered so reluctant a rejection. She braved a smile in his direction, noting his clean-shaven jaw and anticipating the smell of his shaving soap. Her father thought she was weak because she’d allowed an earnest young dreamer to disrupt his ambitions for her, when actually she’d never done anything braver than championing Bailey. Bailey was a good man who’d never had an opportunity to thrive, and Molly understood a thing or two about limited opportunities.

From the raised platform, Reverend Stoker closed his Bible. “Thank you, Mrs. Bradford. We’ll faithfully pray for you this week, won’t we, church?”

Grunts and a few drowsy amens echoed over the heads of women itching to get their food on the tables before it cooled in the mild October weather.

“Then if there are no further—”

“I have something to say.”

Molly’s teeth rattled, she shut her mouth so hard. She turned quickly, her blond curls swinging straight out.

Not Bailey, Lord. Please, not Bailey.

He pulled himself up by the back of the pew and studied the floor. “Y’all need to pray for me. I’ve got a burden that’s wearing me slick.”

His silhouette blocked the sunlight streaming through the open window and stretched his shadow across rows of shocked parishioners. His eyes wandered in Molly’s direction, held her gaze for an agonizing moment, and then turned toward the stained-glass cross in the window behind the pulpit. “God’s convicting me, but I keep falling into the same pit. I’m still snared.”

Molly’s bonnet quivered. This wasn’t part of their plan. She opened her mouth to protest, but her mother elbowed her sharply in the ribs. Holding her side, she looked again to Bailey. He’d never done this before. Only the elders spoke, and when they did, their stories were as bland as buttermilk. Terrified, Molly realized that Bailey’s confession could be quite salty indeed.

He straightened his shoulders and shuffled his feet. “Anyway, guess y’all need to hold me accountable. God has something planned for me, but until I’m free of this . . . temptation . . . I can’t move on to see what that is.”

Freed from her? How could he say such a thing in front of all these people? In front of her parents? Molly’s face went hot and her hands went cold. He couldn’t mean it.

“I ain’t blaming no one but myself, but if I’m serious about following God, I need to get my priorities straight, so pray for me. I can’t do it on my own.”

He plopped down next to his mother. Mary Garner’s face shone scarlet. His father reached around to pat him on the back before turning forward. Everyone turned forward, but they didn’t look at Reverend Stoker. They glared at Molly.

Had her parents been right? Was her relationship with Bailey a mistake? Well, she’d had enough. She wouldn’t be tossed aside like last season’s gowns. Her broken heart could wait as long as there was a comeuppance to be delivered. Tearing free of her mother’s grasp, Molly popped to her feet.

“Reverend Stoker, I have a confession to make, as well.” Her voice sounded as clear as a fork tapped against a crystal goblet. She shook her skirts out the best she could within the narrow row.

“Like all of us since Eve, I’ve made some mistakes.” She wouldn’t look in Bailey’s direction. She would not. Instead, she looked at the parson and wished she hadn’t. The horror on his face almost stopped her. Almost. “And like Eve, I was tempted, but I thought the fruit the serpent offered was healthy and wholesome. I didn’t realize the snake offered me diseased fruit that wasn’t nourishing. Rotten fruit from a tree that was unproductive and fallow. A tree that couldn’t provide for a family or make a decent income—”

Bailey leapt to his feet, hands held out in appeal. “I told you I’m looking for a job. I’m moving to town next month.”

Mr. Lovelace shot up. “Sit down,” he bellowed at his daughter, but Molly could still see Bailey over her father’s shoulders, if she hopped.

“Your employment, or lack of, is no longer my concern. How dare you impugn my character. You’re upset because I won’t—” Her father finally wrestled her to her seat.

“I didn’t say anything about your character. No one would know I was talking about you if you’d kept your trap shut.”

Reverend Stoker’s throat clearing trumpeted with an authority that words couldn’t merit. “That will be enough.” His chest heaved in indignation. “This congregation would do well to remember that anyone may come to me for guidance anytime. Some issues are best discussed privately!” He ran his finger under his string tie. “However, we certainly will not forget to pray for you.”

A strident
amen
rang out from the rear of the building, followed by snickers. Molly stared straight ahead, the stained-glass window blurring through her unshed tears. Her heart pounded, causing the lace ruff at her neckline to tremble. Did he mean to hurt her? She bit her lip. Bailey? The one person she thought she could trust?

Her parents stood with the rest of the congregation, and she had no choice but to follow as they pulled her up with them. She submitted, joined their hands, and followed the prescribed procedure to reach the end of the service.

How could she go outside for the potluck and pretend everything was fine? Impossible. She’d hoped against hope she could stall her father’s plans long enough for Bailey to make his fortune. Never had she considered the possibility that Bailey might give up before she did.

Without him, her struggle was over. She’d fought for the freedom to make her own decisions, but without Bailey would she have the courage to continue?

The benediction ended and Molly dropped onto the wooden bench.

“Mr. Lovelace?” Russell James gripped the end of the pew in both hands as if it were a shield. He’d been her father’s bookkeeper her whole life and was still naïve enough to believe it was his good fortune. “If I may be of assistance . . . Please don’t worry about what people say. Their opinions are fickle at best.”

Molly’s father glared at him. “You should look after your own family, Russell, before you attempt to guide mine.”

“Yes, sir,” he stammered. “Please don’t take offense. I was trying to help. I didn’t mean to compare your daughter to Michael.”

“I’m getting the surrey,” her father said. “If you’ll excuse me—”

“We aren’t staying for dinner?” her mother asked. “I had Lola make extra. . . .” His look of annoyance silenced her. “Well, I’m not staying in here.” She rose to follow her husband out the door, Russell James trailing with a caboose of apologies.

Beautiful Force by Quinn, Ella
The Given Sacrifice by S. M. Stirling
Make Mine a Marine by Julie Miller
The Birds of the Innocent Wood by Deirdre Madden
The Lost Wife by Alyson Richman
One More Body in the Pool by Ray Bradbury
A Bear Victory by Anya Nowlan
Red Mandarin Dress by Qiu Xiaolong
Never Understand Part One ( Johnthen Trent Adult Romance 1) by Mailer, Miranda
The Mirror of the Moon (Revenant Wyrd Book 2) by Travis Simmons
Our partner