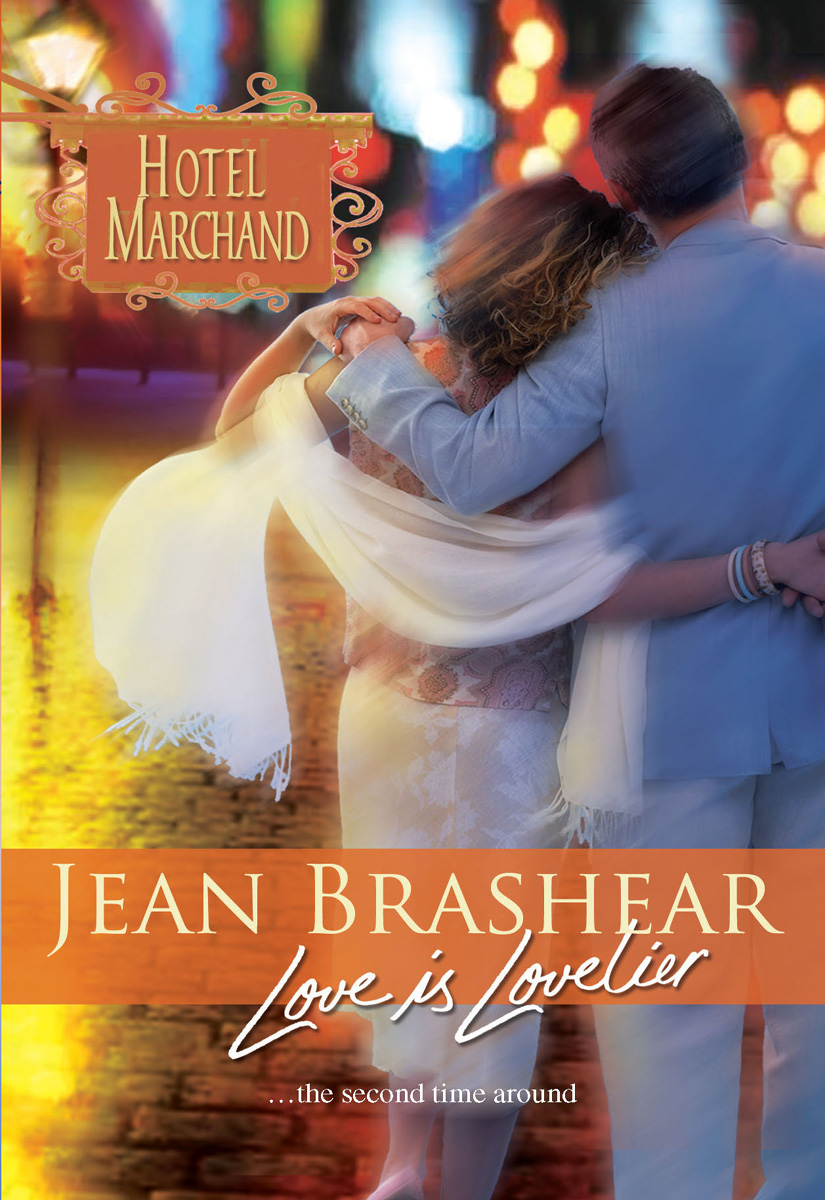 What I am going to say might be difficult for you to hear, but perhaps this is why I started writing to you in the first place. For the past few months, I have been seeing William Armstrong. I know! I know! He was once your rival, but we were so young then. Remy, it’s wonderful to have someone to confide in again…someone who understands the hotel business as much as William does. It started out with simple companionship, but I can no longer deny that our relationship is changing.

Remy, this is so difficult for me. You were my life, my love, and you will always be with me, in my heart and in the eyes of our beautiful daughters. I am so confused. I thought we would grow old together, and after you died, I was prepared to be alone until the end of my life. But now…

I had to tell you, Remy. Maybe I needed to admit to myself that William is becoming more important to me by the day. Oh, my love, so many problems with the hotel, the last thing I need is this personal turmoil. Where are you to remind me that this,
ma doucet,
is the game of life and love?

Could I be so blessed, Remy, to find love a second time?

New Orleans has always had her own special magic—a rich, spicy gumbo of tastes, sounds and sights unlike anywhere else on earth. No hellion hurricane can change what she has been to us and it can’t change our love for the place and the valiant people committed to making her rise again.

She’s still there, maybe caught a little like Sleeping Beauty, beneath the brambles storm and sorrow have cast over her. But she’s not asleep, oh, no, not that saucy wench. She’s just catching her breath, but some of her toes are tapping, ready to jump up and dance, to let those good times roll again.

New Orleans is different today, in some ways, but the essence of her remains. I am fortunate enough to know some wonderful people there, folks who are not quitters, who will never give in to defeat. They, and so many others have been bringing Cajun Sleeping Beauty, with her wild raven hair and her layers of beads, her flashing brilliant skirts and dancing bare feet, to life again. Let’s all pitch in to help by paying a visit and supporting her economy. Meet you at Café du Monde for beignets,
eh bien?

I loved being a part of this series to celebrate the wonder of New Orleans. I hope you’ll enjoy spending time with Anne and William and seeing that love truly can be lovelier the second time around.

Jean Brashear
is a three-time RITA® Award finalist, winner of an
RT Book Reviews
Series Storyteller of the Year award and numerous other awards. Jean Brashear believes that love is the most powerful force in the universe and cherishes each opportunity she’s given to share that belief with readers. She loves to hear from readers, either via her Web site, www.jeanbrashear.com, Harlequin’s Web site, www.eHarlequin.com, or by mail, P.O. Box 3000 #79, Georgetown, TX 78627-3000.

A
NNE
M
ARCHAND POISED
at the edge of the pool in the rose-tinted pearl of the moments before dawn. Artfully-placed lighting cast dancing shadows as a breeze ruffled the fronds of ancient palms in massive bronze planters. Banana tree leaves swished and chattered together like ghosts of ladies long past.

Anne clutched the lapels of the ruby cashmere robe her girls had given her for Christmas and shivered. New Orleans was balmy in February compared with other parts of the country—but forty degrees with any wind blowing, however blocked by the gracious bulwark of her hotel, was still forty degrees.

Cold for her Creole blood.

She thought longingly of her comfortable bed upstairs, the Porthault linens possibly still warm beneath the cream silk duvet from her body’s heat. Bit by bit, she was moving her life back to the hotel from the stiff grandeur of her mother’s Garden District mansion, against the wishes of her four very overprotective daughters.

This fitness regimen is part of how you prove to them that you are no longer an invalid,
she lectured herself.
Drop the robe and get in. They will never stop hovering if you don’t keep demonstrating your restored health
.

She loved to swim. Was determined to keep her body as toned as sixty-two years on this earth would allow. She had never intended to outlive her beloved Remy by so many years as lay ahead. Had wished, in a part of herself, to follow him after the accident, but for the sake of her already-grieving children.

And for the legacy he and she had put their hearts and souls into, second only to those daughters: Hotel Marchand. Their fifth child was in grave danger, and Anne would not let her go down without a fight.

Anne herself was a survivor.

The mild heart attack had been a wake-up call, alerting her to many surprises. One, that working long hours was not a substitute for proper exercise, however much those hours had kept her going after losing the love of her life.

Another was that her children could be good partners. She would never cease to be grateful that her daughters Renee, Sylvie and Melanie had been able to help her eldest, Charlotte, the hotel’s general manager, when their mother was laid low.

Anne had a new and tantalizing vision of how the next years might be spent, but it would have to wait until the hotel was safe. When that was accomplished—and she could only pray that it would be—she would make time for girlhood wishes she’d put aside. She would, as the old saw went, stop and smell the roses.

But for now she had had all the leisure she could stand
regardless that her daughters would like to see her safely tucked in bed or, at most, reading quietly in the corner.

So.
First, off with the robe. Don’t think about how cold that water will be
.

She and Remy had built this hotel on the strength of hard work and limitless discipline in all those years when they’d had a dream some people—her mother, especially—had considered a laughingstock.

Celeste Robichaux had had a very different future in mind for her daughter. A suitable marriage, preferably to her dearest friend’s son, William Armstrong. Anne assuming her position as a society matron, living her days much as Celeste had, a constant round of teas and bridge and
noblesse oblige
.

But the girl Anne had had visions of the Left Bank, an artist’s existence in bohemian Paris, where she would create works of stunning brilliance.

Neither had gotten her wish.

Not from the day that Remy Marchand looked up from a complicated dish he was creating and laid eyes on the intern involved in updating the hotel restaurant where he reigned as chef.

In that moment, two lives changed course. Anne smiled to think of her first sight of the tall man with wavy hair the color of bourbon. Four years after she’d lost him to a drunk driver, smiles far outweighed her tears, though each of them was still smudged by the umbra of her longing for the man she’d intended to love until the day she died.

She shivered again in the breeze and forced herself to put one foot on the first step.

Merde
. Anne was not one to swear, but at this instant, she wished the hotel’s finances were less strapped so that they could afford to run the pool heater longer hours.

She clamped her jaws together, withdrew that foot and walked around with deliberation to the deep end of the pool. Then did something out of character for a woman with a reputation as one of the most elegant in New Orleans.

She squeezed her nose between thumb and forefinger—

And jumped, feetfirst, into the chilly water.

W
ILLIAM
A
RMSTRONG STOOD
in the shadows and grinned.

How like her, that iron will masked so well beneath the delicate exterior. Anne Marchand never flinched at a challenge.

He’d come here, hoping to catch her at breakfast, since she had not spent the night in her mother’s house, just around the corner from his, for the last several days.

He missed her joining his morning walks, his frisky young Lab serving as their chaperone. In recent weeks, she had often joined him for coffee in his conservatory afterward, their conversations ranging over a wide array of topics, both surprised by how many interests they had in common. Occasionally she had unbent enough to share some of her worries about the odd series of calamities besetting the Hotel Marchand lately. Her daughters had tried to shield her from the knowledge, but they severely underestimated her skills at piecing together information and forming a whole.

As a fellow hotelier, if on a larger scale, he heard the words she didn’t say and did some piecing together of his own. She was gearing herself up to resume the juggling act she’d been performing ever since Remy died and the local economy had suffered after the hammer blow of Hurricane Katrina. Taking up residence at the hotel again was her signal that she had recuperated enough. If her daughters didn’t want to listen, she was perfectly capable of charting a new path. Whatever was required to save the Hotel Marchand, she would do, regardless of the cost to herself.

He understood that. Admired that quality in her, as he did so many others—almost as much as he decried it. He felt an increasing desire to step in front of her, to shield her from adversity. Wrap her up and deposit her somewhere safe so that she would never endanger her health again.

But she would never stand for it.

She was beautiful, would be so at any age, but much of what appealed to him in her was far deeper than the physical.

Not that the façade wasn’t lovely. Still an exotic Creole beauty in her sixties, Anne Robichaux Marchand had arresting features, her skin tawny, her eyes a bewitching hazel, her bone structure delicate. Unlike many older women whose hairstyles shortened with age, Anne wore her thick, dark mane, richly streaked with silver, long enough to brush past her shoulders. Her hair seemed to match her mood—sometimes caught up in whimsical chopsticks, sometimes simply hanging
straight, at other moments clasped in filigreed combs. Her sense of style was unique, and the increasing color in it reflected, he liked to believe, a woman nearly emerged from her mourning.

A widower himself for eight years now, he was not unfamiliar with the process. His thirty-six years with Isabel had been good ones. His wealth and Garden District home put him high on the eligible bachelor list for the city’s socialites, but none of them had held his attention for long.

But his Anne—for he was beginning to think of her that way, regardless that she had not yet made peace with the bond growing between them—was a gorgeous, perplexing woman whose layers he found fascinating to peel.

And a widow attracted, despite herself, to her beloved husband’s archrival.

Unless, of course, she found out what he’d done.

B
EYOND THE SPILL
of lights, another set of eyes watched them both.

Walking in Darkness by Charlotte Lamb
On Her Knees by Jenika Snow
This is a Call by Paul Brannigan
Frankenstein Lives Again (The New Adventures of Frankenstein) by Glut, Donald F., Maddox, Mark D.
A Velvet Scream by Priscilla Masters
BloodWitchInferno by Mary C. Moore
4 Impression of Bones by Melanie Jackson
Historical Lovecraft: Tales of Horror Through Time by Moreno-Garcia, Silvia, R. Stiles, Paula
The Big Dirt Nap by Rosemary Harris
Out of My League by Hayhurst, Dirk
Our partner