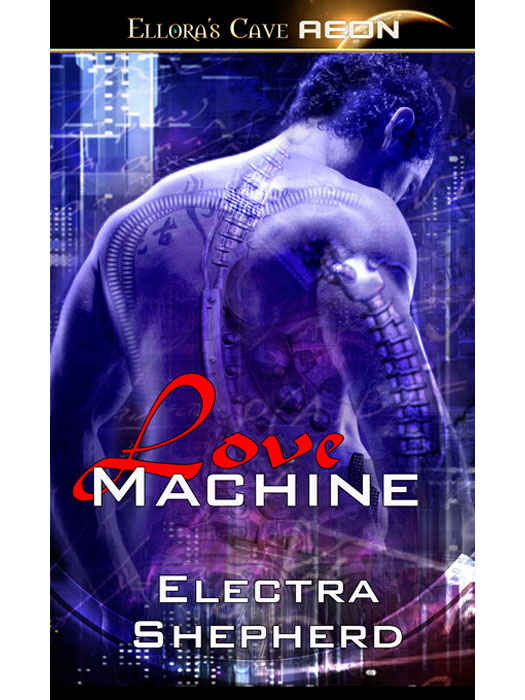 Cally quickly realizes Blue isn’t the average robot. He’s
rapidly acquiring a personality, for one thing. And an avid interest in human
sexuality, particularly when it comes to Cally. She’s eager to teach Blue all
she knows about sexual pleasure, even if they have to build him a few necessary
parts in the process. And even if Blue’s explorations of human feelings touch
her own, very human, heart.

Warning: The unauthorized reproduction or distribution of this
copyrighted work is illegal. No part of this book may be scanned, uploaded or
distributed via the Internet or any other means, electronic or print, without
the publisher’s permission. Criminal copyright infringement, including
infringement without monetary gain, is investigated by the FBI and is
punishable by up to 5 years in federal prison and a fine of $250,000.
(http://www.fbi.gov/ipr/). Please purchase only authorized electronic or print
editions and do not participate in or encourage the electronic piracy of
copyrighted material. Your support of the author’s rights is appreciated.

The publisher does not have any control over, and does not assume
any responsibility for, author or third-party websites or their content.

To Jon Osterman and Abe Sapien.

A Saturday Night, Not Too Far in the Future

“Another drink, Cally?” Blue’s polite, carefully modulated
voice came from behind her. Without being able to see him, you’d think he was a
real human.

Cally nodded without looking up from her phone. “Make it a
double this time,” she said and dialed Zach’s number.

For obvious reasons, Zach was near the bottom of her
contacts list but he was worth calling. He had the most delicious, smooth chest
and muscular legs. A surfer. Picturing Zach’s naked body, Cally licked her
lips. She should have called him ages ago.

“Cally?” Zach answered the phone. He sounded…well, he
sounded a little surprised. It had been too long since they’d last gotten
together. “What—what’s up?”

“Hey, Zach,” Cally said, slipping into her comfortable,
seductive drawl. “What’re you up to tonight? I haven’t seen you for a while.”

“Um…thanks for the invitation, Cally, but I got married two
months ago.”

“You got married?”
Why?
Cally fought the impulse to
ask and instead she said lightly, “Oh congratulations! Anyone I know?”

A blue arm and hand appeared at Cally’s side, putting a full
glass down beside her on the table. She nodded thanks in Blue’s direction and
picked up the drink. Amy Winger? Seriously? “You must make a great couple.”

“You should think about settling down with someone,” said
Zach. “I’ve never been so happy.”

“That’s an idea.” Cally took a long draw of her bourbon and
cola.

“What about Sam? He really likes you.”

“Sam likes me a little bit too much. We split up.”

“I’d invite you over for dinner but Amy might not like it. I
mean, given what you and I used to get up to.”

“Yeah, can’t blame her, I guess.” Zach used to get up to
lots of things with pretty much every girl he encountered. That was one reason
Cally used to like him. No strings, purely recreational sex. Just like her.

Why on earth would a guy like Zach give up all that fun to
settle down?

Cally shook her head again and took another drink. “Well,
Zach, it’s been nice talking to you. Have a good weekend.”

“I will, Cally. You take care now. I hope you find someone
special soon like I have.”

“Uh, yeah. Thanks.” Cally hung up and let her head rest on
the back of the leather chair.

Angelo was busy, Bill was out of town. Charlie was working,
Darby was engaged. Sam was too keen to settle down. Marcus was in jail—she
didn’t want to think about that one. Zach was married.

“I could drive into town and go to Chico’s,” she said,
considering.

“I would not advise it, Cally,” said Blue, still out of
sight behind her, doing whatever Blue did to keep busy. “The roads are already
freezing and it will snow by midnight.”

“I can drive in snow,” said Cally automatically but Blue’s
weather forecast decided her. She didn’t feel like going out in the cold. She
felt like getting laid. And what if she went all the way to Chico’s and there
wasn’t anyone she was attracted to? She’d be even more unsatisfied than she was
now.

“Your blood alcohol level is beyond the legal limit for
driving,” Blue added.

For the first time tonight, Cally swiveled around in her
chair to look at Blue. The robot was in the shape of a tall humanoid. If you
were color-blind and severely myopic, you might mistake him for a real person.
Well, a real perpetually naked person with glowing eyes and no hair, nipples,
navel or genitalia.

He was dusting Vincent’s books. With a feather duster, of
all things. In his large hands, it looked ridiculous. Plus the hot-pink
feathers clashed with his blue skin.

She could argue with Blue about her ability to drive, just
to be ornery, but she knew it would be pointless. The house robot probably had
some sort of detector fitted to read humans’ blood alcohol. She wouldn’t have
put it past her father to install one. Victor Morgenstern had designed his
inventions to cater to his family’s every need—why not equip them to prevent
the remaining Morgensterns from drunk-driving too?

“What is it about families?” she asked Blue instead. “Why do
people think family life is so special that they can’t wait to settle down and
create the same old messes over and over again? Why can’t people just have
fun?”

She felt stupid for asking it of a house robot, of all
things. What would a house robot know about families and settling down? They
didn’t feel anything. They didn’t think anything. They had chips and circuits
instead of brains and flesh. They were her father’s invention, like a million
other things he’d invented. He’d only made three of them before he died, three
of them with different-colored skin and glowing eyes, that whirred discreetly
around the Morgenstern mansion tending to his grown-up children’s every
domestic need.

The robots weren’t there for answering questions. Their
state-of-the-art voice box technology had helped thousands of people to talk
and, along with Vincent Morgenstern’s many other inventions, had made the
family a fortune. But they weren’t programed to converse beyond a few everyday topics.

Her phone rang. The number was Sam’s. For a split second she
considered answering it. But then she remembered their last date, when Sam had
tried to get all romantic, and she turned the phone off instead. Sam was a nice
enough guy but he was trying to make things too complicated.

Cally got up abruptly. “Thanks for the drink, Blue. I’m
going up to bed now.”

“I’ll bring you up a glass of water.”

She went up the stairs, hoping she wouldn’t run into her
older brother Jonathan or her younger sister Ilsa. Most of the time the three
of them could stay out of each other’s way in the four-story Morgenstern
mansion. Even with three family members and three house robots, the place
seemed pretty empty.

Since their father had died a couple years ago, it seemed
even emptier. Their mother had died when Ilsa was still a child, and while he
was bringing them up, Vincent Morgenstern had been gung ho on family
togetherness. He’d made them promise to live together in the family home for as
long as they could.

Ironically, now that Vincent was gone, being together
reminded his children of him too much to bear. It seemed they avoided each
other as much as possible these days.

When she reached her bedroom at the top of the house, Cally
toed her shoes off and unbuttoned her jeans. She shed her clothes all the way
across the large room and pulled pins from her hair until, when she reached the
big, king-sized bed with the forest-green bedspread and wealth of silk and
satin cushions, she was totally naked and her chestnut hair tumbled down her
back. She flung herself onto the bedspread with a sigh of anticipation and
rolled over so she could open the drawer in her bedside table.

Old Faithful. Eight inches of pliant hardness, curved and
ridged to simulate a real penis only better, with a special clitoral attachment
and buttons that made it shake, vibrate and gyrate in whichever way she chose.
It had had a lot of hard use and it had never failed her yet.

Cally lay back on the cushions. Just the thought of what
that big hunk of plastic was going to do to her nerve endings made her get even
wetter. It wasn’t the same as having a real man, true. But then again, Old
Faithful didn’t burp or get drunk or fall asleep before she’d come. Old
Faithful didn’t try to wheedle her into a relationship or go off and get itself
arrested.

She licked her lips, spread her legs and flicked Old
Faithful’s on button with her thumb.

“Oh shit.” Cally sat up and flicked the button again.
Nothing happened, again.

Blue caught it. He had arrived in the doorway, a glass of
water in one hand, and he merely reached out with the other and stopped Old
Faithful from bouncing against the wall.

“Something wrong, Cally?” he asked in his calm, courteous,
human-sounding robot voice.

“It pretty much
was
my evening.”

“Perhaps I can help you.”

“Do you have some spare batteries hanging around?”

Precisely, as he did everything, Blue opened the drawer of
the bedside table and laid Old Faithful inside, exactly where it belonged.

“I have an alternative suggestion,” he said. “Perhaps you
would consider allowing me to take its place.”

“I believe I am much more technologically sophisticated.”

She smiled. “Blue, you don’t have a clue what that thing is
used for, do you?”

“It is used to provide sexual pleasure to humans.”

“It is applied to the clitoris and inserted into the vagina
to produce sensations leading to orgasm.”

Cally couldn’t help it. She laughed aloud, throwing her head
back. “Wow, Blue, you’ve been doing your homework, huh?”

“And if my observations of you are correct, you are now
curious to know how thoroughly I have learned this ‘homework’.”

House robots moved their mouths to talk but they didn’t
smile. They didn’t have a sense of humor. It was the way Blue’s face was
slightly tilted that made him look mischievous. A human emotion that Cally was
projecting onto a bundle of carbon fiber, silicone and computer chips.

But Blue was right. She was curious.

Cally reached for her bourbon. She drank it all down in one
gulp.

“Sure,” she said to the robot. “It sounds interesting. Why
don’t you show me how technologically advanced you are.”

Finding Stefanie by Susan May Warren
The Affair by Emma Kavanagh
This Is What I Want to Tell You by Heather Duffy Stone
Awakened Desires by Rissa Blakeley
The Immortal Storm (Sky Chaser Book 1) by Wilkes, S.D.
PeeWee's Tale by Johanna Hurwitz
Unamused Muse (Mt. Olympus Employment Agency: Muse Book 2) by R.L. Naquin
Entwined with You: A Crossfire Novel (Crossfire Book 3) by Day, Sylvia
DEAD: Confrontation by Brown, TW
With Love from Bliss (Saskatchewan Saga Book #2) by Ruth Glover
Our partner