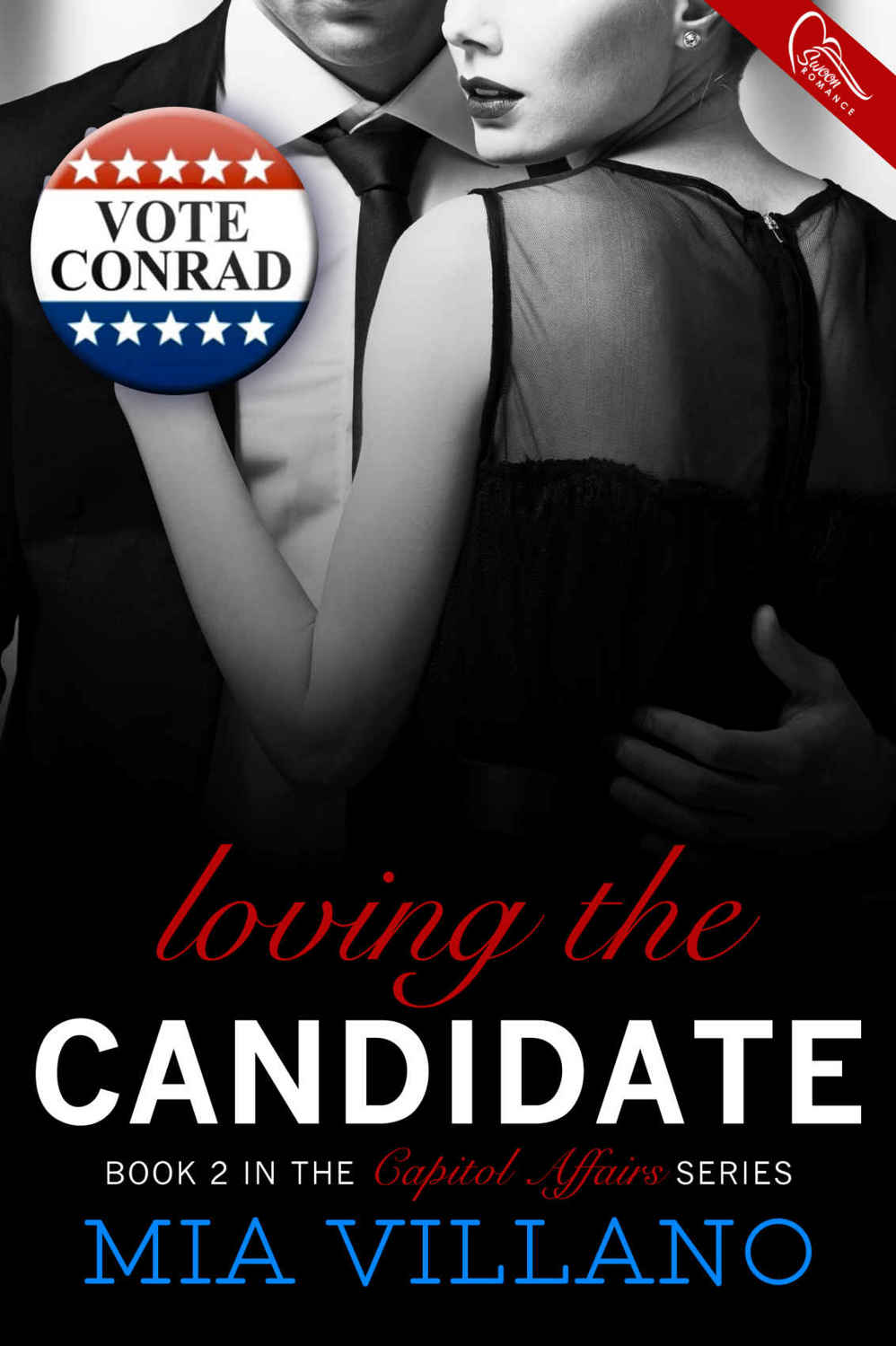 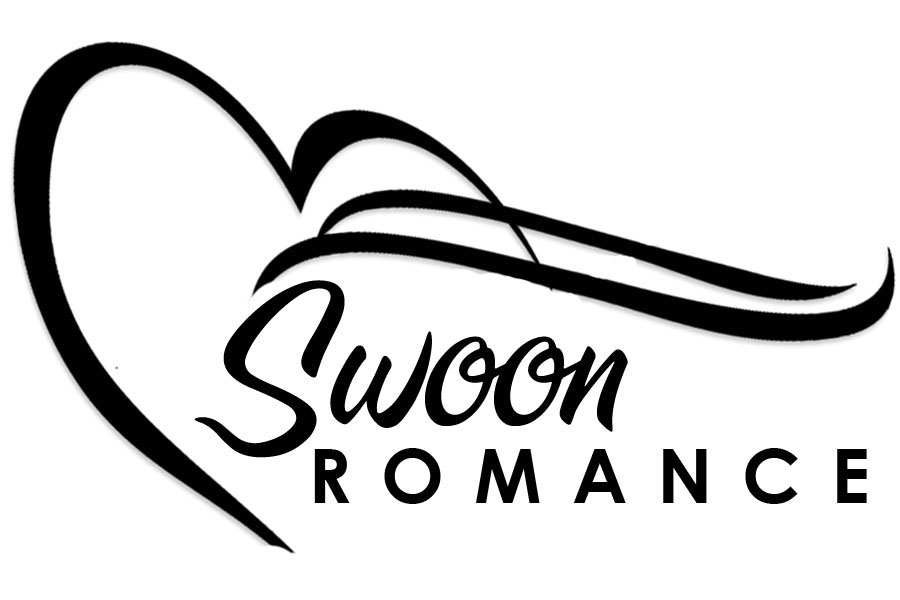 LOVING THE CANDIDATE by Mia Villano

All rights reserved. Published in the United States of America by Swoon Romance. Swoon Romance and its related logo are registered trademarks of Georgia McBride Media Group, LLC.

“What is going on, Alex?” I asked as he hurried from the auditorium, holding his phone to his ear.

“Stay inside, Prudence,” he yelled.

Instead, I followed right behind at his heels. Nearing the school’s exit sign, I struggled to race after him, my high heels clacking on the floor. The unlocking of the door handle echoed down the hallway when Alex ran out into the pouring rain.

“I mean it, Prudence. Stay inside.” He turned and yelled. The rain pelted his head, soaking him instantly. He blinked, trying to keep the rain from his eyes, and lifted his suit jacket over his head.

“I don’t care. I’m not leaving you, Alex. It’s her, isn’t it?” I yelled back, following him into the pounding rain.

Looking at a Cadillac, Ashe stood beneath his rain-battered umbrella. The car was backed against the fence facing the school. Inside, I saw Stella. Through the downpour pelting the windshield, I still made out her face. She sat with a small silver revolver to her head, which was covered with a gray hoodie. Something was terribly wrong. She stared at Alex and smiled. It was worse than I’d imagined.

“Stay behind me. Prudence, you shouldn’t even be out here,” Ashe yelled. He pulled Alex behind him, taking me with him. Sirens howled in the distance.

“Get these kids out of here,” Alex yelled to the traffic director who stood with a whistle hanging from the corner of his mouth, staring at the car.. Startled out of his fog, the man started rushing the students from the parking lot and out of harm’s way. One of the students saw the gun and screamed. The other students panicked, and all hell broke loose.

Alex yelled loud enough for Stella to hear him through the pouring rain. With a creepy smile, she blew Alex a kiss and held the gun to her head. The water dripped off his head as he looked at her.

The bang of the gun was muffled by the car, yet it still sounded terrifying. A sound I had heard once before when Alex had gotten shot so many years ago.

“Oh my God,” I yelled, throwing my hands up to cover my eyes.

I peeked to see if she’d done what I imagined. Blood splatters covered the window, dripping inside, racing along with the rain on the outside. I had seen my mother overdose and found her unconscious. I’d watched her die in front of me, but I had never seen someone deliberately take his or her own life. I couldn’t believe Stella had ended it all in a matter of seconds.

Alex ran toward the car. Ashe threw his umbrella down and put his body in front of him, blocking him from running any further.

“Don’t do it, Alex. It’s too late,” Ashe yelled. He wrapped his arms around Alex and pushed him back. The rain pelted both of them as Alex stared in shock.

Police suddenly swarmed the parking lot, the cars screeching to a halt around the Cadillac. The sirens were deafening. I ran to Alex and held him close. I needed to feel him breathing and have his heartbeat pound against me. Both of us were soaked, and it didn’t matter. He turned and looked at me and held me tight to him. I watched the car, hoping she would move that she wasn’t dead, hoping she still lived. Through the rain, I saw Stella’s open eyes. Her head was cocked in an unnatural way.

I couldn’t get out of Alex’s protective grip. I cried and trembled, burying my head into his chest.

“She could’ve killed you,” I cried. Fears of Alex being shot again rushed through my mind.

“She didn’t. She wouldn’t have. She wanted me to see her kill herself.” He tried to glance into my eyes, moving my dripping hair out of my face.

The police raced to the car, guns drawn and pointed toward the woman who was obviously dead. They opened the car doors. One of the officers reached in and checked for a pulse. He shook his head. Blood dripped down the door and onto the ground in big drops. The rain washed it away. Alex and Ashe talked to the police while I headed back toward the school. Inside, someone gave me a glass of water and a towel. Mrs. Lewis, the principal, hugged me while she cried. My wet clothes and hair soaked into her. She obviously didn’t care.

I shook my head, unable to answer her.

“Can I get you something else?” she asked.

“No, thank you. I’m so sorry she chose a school for this, of all places.” I cried.

The tears streamed down my face. Mrs. Lewis handed me a tissue and took the wet towel.

Things had been going wonderfully for Alex and me. We had no issues with the press, and they seemed to have forgotten about our age difference. Everything that was supposed to happen seemed to have been happening up until fifteen minutes ago.

Looking out through the dirty school window, I tried to catch a glimpse of Alex. He and Ashe were talking to the police in the distance. The other police officers took extra precautions, moving everyone out of the parking lot back into the school. One officer surrounded Stella’s car with crime scene tape. The ambulance pulled up close to the school window and a paramedic pulled a cover over Stella’s lifeless face.

Reporters began to crowd the parking lot with cameras and microphones. They didn’t care that a life had been wiped out, or that children had witnessed such a horrific event. Their only concern was getting the best story and a gruesome picture of the dead body.

Parents pulled up in their cars, jumping out while the engines idled and the doors hung open. Shook up and crying, they looked for their children among the crowd. Police officers pushed them back and tried to keep them calm. I had no idea how word had gotten out so fast. Alex was sure to be the big story once again. I ran to him as soon as he and Ashe walked inside, and he held me before he went to speak to Mrs. Lewis and a few others. She hugged him and told him everything would be okay. She gave me one last hug before Ashe escorted us to the back door where Alex’s car waited.

He probably hoped to get us out of there before we were spotted; it didn’t work. The reporters saw us and ran. Ashe had barely shut the door before he threw the car in drive and pulled out slowly yet with determination, trying not to run down the press.

Mark sat in the passenger seat, his brow furrowed as he spoke on his phone. I settled into the backseat next to Alex. The day was hot and humid so Ashe turned the air on full blast inside the SUV. My clothes were still soaking wet, and the air sent a chill through my body. Alex pulled me to him when he noticed me shivering. The cameras flashed in our faces, and I buried my head into Alex’s neck. All I heard in the confines of the darkened SUV were the sounds of the windshield wipers and mumbling from outside.

“Did you know she was coming here today? Senator Conrad, did you fear for your life?” I didn’t care to look at anyone. I kept my face in his neck as the questions came at us through the car windows. They would be at our house in no time, so Mark got on the phone and had the driveway blocked until we got inside. We rode in silence and held hands in shock. Ashe was the first to speak in the dark ride as we headed into a threatening thunderstorm.

“That was fucked-up, Alex. Jesus Christ. Prudence, didn’t you say she had a book or something with her?”

“I shouldn’t have taken off. I should have stayed and answered their questions. I looked weak running out of there,” said Alex, looking out the window.

“There was nothing you could do. You had to get Prudence out of there. You don’t look weak. You were concerned for the school and your wife. I’m concerned about whatever she had with her beside a gun. I’m going to drop you two off and go back to see if she had something, and if she did, where it ended up.”

Alex’s familiar hand, warm and soft, gripped my thigh as we raced home. Laying his wet head against the seat, he sighed, and I watched him stare out the window. Alex was one powerful man, but I saw the difference in him as he sat there in silence.

Thankfully, we beat the press and drove into the garage before they swarmed the house. Alex helped me out of the backseat; my dress, wrinkled and dirty, stuck to the leather. He held my hand while we stood in the garage but let it go once the garage door came down. As we opened the door to our house, we were greeted by Beckett. His tail wagged, and he sniffed, trying to figure out where we had been. Alex clenched his jaw tight, upset, and deep in thought, he walked right past Beckett without offering his usual pat on the head. I left him alone and tended to the dog, letting him out to do his business. Once he was back inside, I patted his head and filled his bowl with food. Beckett paced around the kitchen. Sensing our uneasiness, he seemed too worried about us to eat.

I went up to our bedroom to change into dry clothes. I wanted to hide in my closet all night, buried on the floor under my clothes hanging in their color-coordinated rows. Cocooned in safety and surrounded by my things, I ran my hand over them, reminding myself I was still alive, happy, and with Alex. I took off my soaked dress, jumped into a warm quick shower, and then threw on my favorite pair of ripped sweats and Alex’s oversized sweatshirt. The familiar jangling of Beckett’s chain rattled as Alex came up the stairs with the dog in tow. He put on his lounging pants and a t-shirt. Even though it was still early in the evening, I was exhausted, and I fought the urge to snuggle into our bed.

“Let’s go downstairs and sit in the living room for a while,” I suggested.

Steal My Heart by Lanier, Linsey
War of Power (The Trouble with Magic Book 3) by B. J. Beach
A House for Mr. Biswas by V.S. Naipaul
Spin by Bella Love
Monroe, Marla - The Bikers' Babe [The Dirty Dozen 2] (Siren Publishing Ménage Everlasting) by Marla Monroe
Eternity by Heather Terrell
Dark World: Into the Shadows with the Lead Investigator of the Ghost Adventures Crew by Crigger, Kelly, Bagans, Zak
Nebula Awards Showcase 2013 by Catherine Asaro
Wrong Time by Mitchel Grace
A Really Cute Corpse by Joan Hess
Our partner