LUCA (You Will Be Mine) (The Sicilian Mafia Series Book 1) 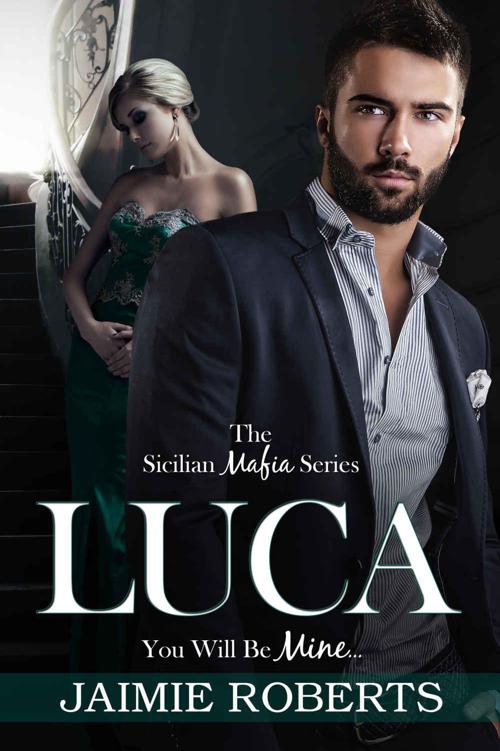 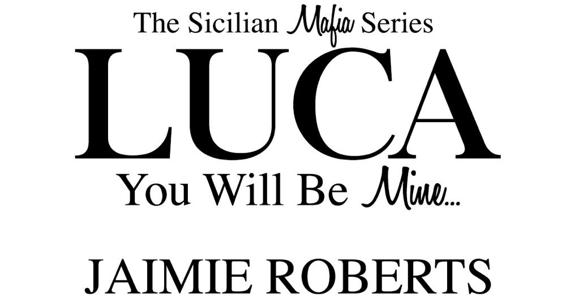 This is a work of fiction. Names, characters, businesses, places, events, and incidents are either the products of the author’s imagination or used in a fictitious manner. Any resemblance to actual persons, living or dead, or events is purely coincidental.

Other Books by Jaimie Roberts

Excerpt of A Step Two Close

Picking up some random chick from my club, I took her to one of my many apartments. This one was reserved for one thing and one thing only:
fucking.

She was brunette, curvaceous, and had the most gorgeous tits I’d ever seen … But that wasn’t why I’d brought her here. I brought her here because I wanted to prove a point. Today was the day I laid eyes on the most beautiful angel I had ever seen. It was only a picture, but I couldn’t get her image out of my damn fucking head.

Watching this woman strip in front of me should have been a turn-on, but she did nothing for me—not even a twitch.

Hovering over my cock, whoever she was started licking and sucking me hard. I was going to push her away and tell her to fuck off, but then I closed my eyes, and the image of that girl came into my head. Clara.

Holding onto that image, I began to grow hard inside her mouth. Imagining it was Clara made my dick stiffer than it had ever been.

Random Chick moaned her appreciation as she sucked harder. I should have fucking loved this, but all I could think about was
her
.

Grabbing a condom from my bedside table, I pushed this girl off of my cock. I still wanted to prove a point. I had always loved sex. If I could just feel this random woman’s pussy, then I was sure I could forget
her
.

I placed the condom on my cock and hissed when I felt the urge to fuck her raw. “Fucking sit on me—now.”

Smiling, she did as she was told and started riding me hard. I closed my eyes again, and straight away, my mind went back to Clara.

Why can’t I get her out of my fucking head?

This woman’s body was perfection, and yet she was doing absolutely nothing for me. I tried grabbing her hips and gaining control as I pulled her down on top of me. Nothing—not a damn thing. She may as well have been jumping on top of my stomach instead of my cock.

It wasn’t long, though, before her moans of pleasure echoed around the room. I knew her orgasm was coming quickly as she sped faster and moaned louder than ever before. Once her spasms died down, I shoved her off of my cock.

“Luca, what the fuck? Baby, you’re so fucking good. Let me make you come now. I can suck you again if you want?”

Shaking my head, I just wanted her out. “No. Just leave.”

Grabbing her things, she stomped across the room and quickly got dressed. “Arsehole!” she shouted before slamming the door.

Fucking hell! What was wrong with me? This
Clara
seems to have possessed me. No other woman has ever possessed me like
this
woman has. Her picture practically screamed at me to touch her … to feel her … to caress her.

Still lying on my bed—and still hard as fuck with this condom on me—I started to touch myself. I closed my eyes, and again, straight away, her image came into my head.

I pictured myself taking her and making her mine. The thought made my dick come to life like never before. My movements became faster and my breathing heavier as I imagined thrusting myself inside this woman I hadn’t even met …
yet
. It wasn’t long before I felt it: that blissful intensity permeating my whole body. That feeling which was like no other, radiating through me as I hurried to find my release.

Seeing her through my closed eyes, I started pounding faster and harder. A sound escaped my lips as I jerked and bucked underneath my hand, thrusting my release as hard as I could into the condom.

What the fuck was wrong with me?
Why couldn’t I get her out of my fucking head?

After my breathing calmed, I took the condom off and went to have a shower. Feeling the warmth hit my skin, I closed my eyes again, and again her image filled my head.

Slamming the wall with my fists, I came to a sudden conclusion. It was something I’d always known I was going to do—deep down—from the moment I saw that fucking picture.

That’s why you offered Trudy a way out, you silly fuck. You knew then that you had to have her.

I turned the shower off and grabbed my towel. The decision had been made. I was going to go to Clara Murphy, but first I wanted to see just how tough she really was.

With my mind made up, I smiled; excitement was growing with every thought which passed through my head. I was going to go to Clara Murphy and sort out this little obsession of mine once and for all. I knew all I had to do was see her and my mind would be made up for me. I would either fuck her until she was out of my system—or I would make her mine.

Getting dressed and ready to leave, I already knew in my subconscious what the answer was going to be.

I’m coming to get you, Clara Murphy. So, you had better be ready for me. You will be mine, and there isn’t a damn fucking thing you can do to stop me.

My parents had always been rich, well-respected, churchgoing pillars of the community. They were also selfish and manipulative pieces of work. My childhood was a filled with memories of nothing but pain and anguish. Everything I did was a sin. Every
thought
I had was a sin.

They tried bringing me up to their standard of living, but I could never be moulded. From the time I was a little girl, I had possessed an independent streak, so it never worked. Even when my dad decided to beat some sense into me and my mother let him, I never once faltered. She would resort to reading passages from the Bible in an effort to excuse the level of abuse I was made to suffer.

That is what brought me to the point in my life where I was completely cut off from my past and sitting in a posh office, which was situated in an actual castle. It helped that I had a very rich auntie who was willing to aid me in setting it all up.

Trudy was a silent partner in this little venture, and although what we did was unconventional, we made lots of money doing it. At the end of the day, sex sells, and our rich clients were willing to pay top dollar for high-class girls. Sure, we have had our ups and downs, but there hasn’t been anything I couldn’t handle. For example, one situation I had to deal with resulted in me punching one of my clients.

This was one of the reasons why I was sought after. I always had at least a few girls lined up, waiting to join my troops—but only the best would make it. Before joining, they would be tested and sent through rigorous checks before they could make the cut.