Luck of the Dragon (Entangled Covet) 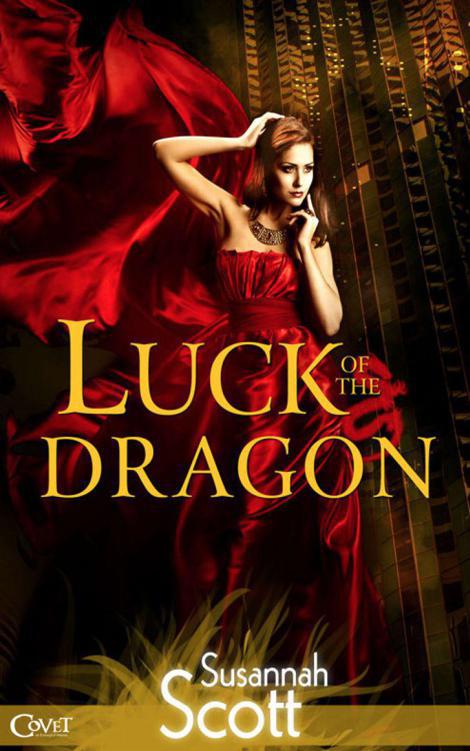 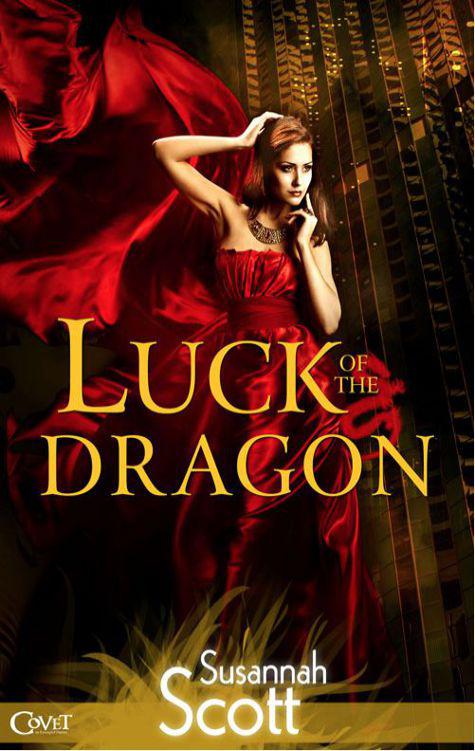 Luck of the Dragon

Copyright © 2013 by Susannah Scott. All rights reserved, including the right to reproduce, distribute, or transmit in any form or by any means. For information regarding subsidiary rights, please contact the Publisher.

I dedicate this story to my grandmother, Ouie, who passed away last year at 93, after a lifetime of kicking verbal butt. She was a quintessential steel magnolia from the south. Which means, she never failed to inform me of the proper etiquette of a situation, but then did whatever the heck she wanted. She knew I was writing, and would be so thrilled to read Alec and Lucy’s story—every single scene—no way would she have skipped the sexy stuff!
Miss you so much, Ouie. ~ Your blue-eyed rat.
“Listen kid, marriage is all about compatibility. The man provides the in-come and the woman provides the pat-a-bility… Unless it is the other way around. That works too.” Ouie to me, on the occasion of my marriage.

Lucy shifted in discomfort and silently cursed her pinchy-banded polyester stockings. The hot Las Vegas sun had set hours ago over the casino’s grand opening gala, but the desert air still heated her skin like a blast from her jewelry kiln. Perspiration channeled down her bare back and pooled at the base of her spine. If she was going steal from Alec Gerald, she didn’t need the distraction of slipping hose and sweat. Or a loaner dress that was so short, the hem didn’t touch her fingertips. Talk about distractions.

But
distraction
was the whole point.

The slinky red halter dress tied around her neck, a la Marilyn Monroe, with a low-cut back that plunged below the dimples on her rear, giving the patio full of tourists a great view of her daisy-chain infinity tattoo. Her twin brother, Joey, liked to call her tattoo a tramp stamp. Whatever. Mr. Center of the Universe had officially lost his right to condemn her, on any score, after dragging her into his latest mess. Her gut twisted in an antacid-needing blend of anxiety and guilt.

“Dr. De Luca?” an hourglass-shaped brunette asked. With her statuesque build, the woman could have made a living dancing, except for her buttoned-up white shirt and to-the-knee modest black suit.

“Yes?” Lucy pulled her heavy auburn hair off her neck to cool her sweaty back. Her kingdom—besieged as it was—for a ponytail holder.

Lucy nodded and kept her smile polite. Despite her ridiculous getup, her pride insisted that she at least
act
like the professional she was.

“I apologize, but Mr. Gerald has been delayed.” Jane scrunched her brow, clearly peeved about the change. “He’ll show you the gem exhibit after his speech.”

“You can’t keep him on schedule?” Lucy meant her words to be light and teasing, woman-to-woman commiserating about schedule-busting
men.

Jane frowned and looked toward the sky. “It’s useless to try to control the actions of others.”

“Oh.” Lucy was startled by her reply. It was true, of course. No one
could
control the actions of others, and, unfortunately, Lucy knew that better than most. “It’s okay, I don’t mind waiting.”

Jane’s face settled into a smooth, solicitous expression. “Mr. Gerald asked me to make sure you were comfortable.” She said the word “comfortable” with a tonal raise, making the sentence a question.

Comfortable? Lucy clenched her jaw and wobbled in her too-high shoes. Her comfort was unlikely as long as she was being blackmailed into grand larceny.

“Would you care for something to drink?”

Normally, Lucy would not drink while doing her appraisal work. Normally, her hair would be in an elegant twist, her legs comfortably ensconced in understated pants, and her feet in shoes she could stand in for hours—not fabulosa three-inch gold Manolo Blahniks. But there was nothing normal about the whole setup.

Jane didn’t blink. “Of course.” She turned to weave her way through the thick crowd to the grass-hut styled bar at the far end of the courtyard.

Lucy’s head pounded right between her eyebrows. She pulled in a deliberate breath, held it, and blew it out. The action made her cleavage look downright Betty Boopish.

Good Lord. What was she doing here?

She was Luciana De Luca, Ph.D—the world-renowned gemologist—casing a hundred-million-dollar joint like it was an unprotected street vendor…

She surveyed the crowd outside the Crown Jewel Casino, waiting for the promised grand opening welcome from Alec Gerald. The crowd was typical Vegas eclectic. Show girls with nipple pasties stood next to grannies in jogging pants and comfy bingo shoes. Families held hands with their kids next to decked-out call girls and high-rollers.

Lucy moved her trained eye over the wrists, necks, and ears of the well-plumed assemblage and picked out the authentic jewels from the fakes. There were a few nice stones. A reasonable haul could be made from the crowd alone, but then Gino, the mob’s enforcer and number one creep, wasn’t interested in ordinary jewelry.

“Ladies and gentlemen.” A barrel-chested emcee wielded a microphone from the elevated stage about fifty feet to her left. “Welcome to the grand opening of the Crown Jewel Casino, where your greatest fears can become your greatest pleasures.” The call girls giggled, and the moms and dads glanced at each other and pulled their kids closer.

“It is my pleasure to introduce you to the legend, the casino maker, the King of Las Vegas…Mr. Aleeee-eeec Gerrr-aaaald!”

The crowd members swiveled their heads, scanning for the first sign of the Casino King. A low drum roll began, picking up speed until it seemed the drummer’s arms would give out. But the stage remained empty. The King of Las Vegas was late to his own party.

Miss Manners would have a conniption.

Suddenly, the scent of burning embers swirled over the courtyard and the wind settled, blowing Lucy’s loose hair around her face. A ground-vibrating roar followed, making every human eye search the sky for the source.

Lucy’s well-honed survival instincts went on high alert just as a large SUV-sized black object careened through the air and landed on the raised stage with a
thud
.

Heart pounding, Lucy crouched with the crowd. The acrid scent of smoldering intensified. A little girl huddled near her, shrieking for help and covering her ears.

Lucy reached for her hand. “It’s okay,” she soothed. The little girl trembled and scooted closer to her. “Where’s your Mom?”

“Amanda!” A young woman ran over and pulled the girl from the ground before racing to the courtyard exit.

Pounding from the stage rattled Lucy’s eardrums. Whatever had landed there was moving and alive. On the platform, clawed feet stomped, and the creature’s matte black skin stretched over powerful muscles and bones. Black wings unfurled across the stage, and the animal roared again at the crowd, baring razor-sharp white fangs.

Suddenly, a burst of smoke covered the dragon, and the creature disappeared.

A dark-haired man in an elegant tuxedo stepped through the gray fog and approached the microphone. “I am Alec Gerald.” His voice was deep, and his accent was hard to place but suggested the upper class. “I’d like to welcome you to my newest casino, the Crown Jewel.” Gerald spread an open palm to the frightened crowd. “I hope you enjoyed our first show of the evening.” He gave a devious, knowing smile. “It was all just a costume. Don’t be frightened.”

After a few seconds, the stunned audience stood and broke into applause and catcalls.

Lucy stood, glaring at the casino owner. She had researched him, of course, studying his athletic image in hundreds of Internet pictures. The man was good-looking, apparently brilliant, and ruthless in his business deals. Watching the mesmerized crowd lean toward the stage, she had to admit he had that
something else
too—the showmanship of a champion con man—a magnetism she knew could draw people like lemmings off a cliff.

The man was flat-out people-genic.

Lifting his hands, Gerald quieted the crowd. “Thank you for coming.” On his left hand, a black stone glittered in a gold signet ring.

Lucy fixated on the ring to avoid his hypnotic lure. What stone could be so refractive and still appear so dark? A black diamond, maybe? Her professional self wanted to peer at the ring under her jeweler’s loupe.

That wasn’t going to happen.

“As many of you know, this project has been years in the making.” Alec Gerald surveyed the courtyard, working the crowd with his voice and easy mannerisms. “Our gem exhibit opens in a few weeks and will be the largest private collection of gems in the world. Carat for carat, we will outweigh England’s crown jewels.”

Lucy’s eyes never left him. Though his voice was cultured and smooth, Gerald’s posture was wide-legged and slightly aggressive. Formidable. Her eyes traveled from his polished shoes up his body. The curve of quad muscle showed through his pants when he shifted to the side. His torso was taut and gave way to wide, burly shoulders. A bump on the bridge of his nose indicated he’d been in a fight or two.

Gerald was a brawler, then.

With that piece of information, Lucy was able to place his stance. He stood like a martial arts fighter, slightly forward, able to move right or left as the situation required.