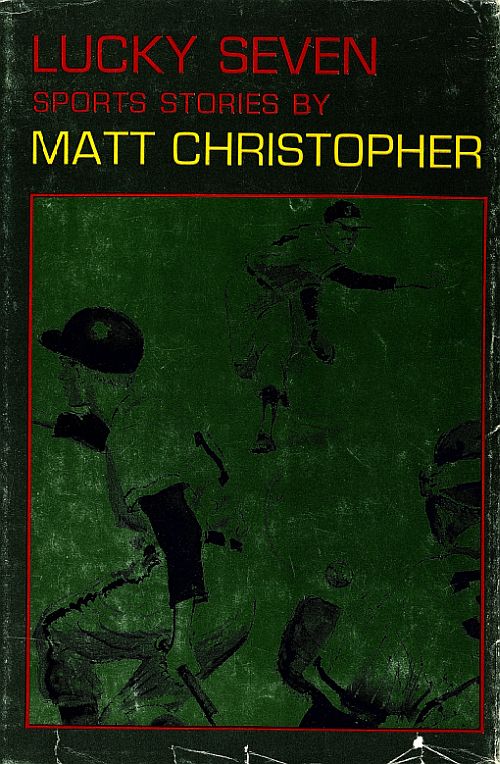 CATCHER WITH A GLASS ARM

TOO HOT TO HANDLE

MIRACLE AT THE PLATE

THE TEAM THAT COULDN’T LOSE

THE YEAR MOM WON THE PENNANT

ALL RIGHTS RESERVED. NO PART OF THIS BOOK MAY BE REPRODUCED IN ANY FORM OR BY ANY
ELECTRONIC OR MECHANICAL MEANS INCLUDING INFORMATION STORAGE AND RETRIEVAL SYSTEMS WITHOUT PERMISSION IN WRITING FROM THE
PUBLISHER, EXCEPT BY A REVIEWER WHO MAY QUOTE BRIEF PASSAGES IN A REVIEW.

Many of the stories in this book originally appeared in magazines, and the author is grateful to the following for permission
to reprint material first published by them:

Straight
magazine for “Baseballs and Bumblebees,” published in
Straight,
June 3, 1962. © 1962 by the Standard Publishing Company.

The Society of the Divine Savior for “Substitute Sophomore,” published in
Manna,
June, 1953.

Matt Christopher’s sports novels have established themselves as favorites of young readers searching for stories that will
help them understand something about themselves as well as provide fast-paced action. These same readers have never had a
chance to read Mr. Christopher’s shorter fiction in book form. We are happy to correct this oversight in publishing this volume.

Of the seven stories included here, two are somewhat of a departure for the author. With “Full Throttle” he leaves the area
of team sports to deal with the fierce competition that has grown up around the pastime of slot car racing, and “Baseballs
and Bumblebees” shows
the author mining a more humorous vein than he normally uses.

We hope that
Lucky Seven
will be a satisfying experience for all those young people who clamor for more of a good thing.

No Spot for Jerry

RUSTY stared at the blank wall. All his hopes of beating the powerful Bearcats were suddenly shattered. Sadly he placed the
phone back onto its hook, Coach Pearson’s words still humming in his ears.

But that wasn’t the worst of it. The coach had asked him, Rusty, if he’d play left end in Rollie’s place tomorrow.

He had never played end in his life!

Who did the coach intend to play quarter-back? Eddie Krantz? That little, half-pint southpaw? That second-stringer? He could
run like a rabbit, but he didn’t know much about football.

Well, the Warhawks might as well hand the game over to the Bearcats. With Rollie in there they would have stood a good chance
of winning. With Rollie out, it would be murder. Just plain murder.

Rusty hadn’t told Coach Pearson that he had no desire to play in Rollie’s place, but that’s how he felt about it.

“You’re tall and you have a good pair of hands, Rusty,” the coach had said to him over the phone. “That’s why I think you’d
be the best guy to put in Rollie’s place.”

Rusty got off the chair and walked glumly away from the phone, hoping that Mom or Dad wouldn’t see the depressed look on his
face. They’d know something was wrong for sure.

When the game started at one o’clock the next day, a warm, sunny Saturday afternoon, Eddie Krantz was in the safety slot.
He was hardly taller than Tom Thumb, but he had gumption. You had to give him credit for that.

The Bearcats kicked off and Beans Jackson, the Warhawks’ gangly right halfback, caught the ball and ran it back to his own
thirty-three before he was tackled.

In the huddle, Eddie called a play for Bruce Fazio, the fullback, to carry the ball.

Fats Munro, the center, snapped the ball. Eddie grabbed it in his small hands, stepped back, turned and handed off to Bruce.
Bruce plunged over their left tackle for a two-yard gain.

In the horseshoe huddle little Eddie crouched in front of them with his elbows on his knees and his eyes peering intently
over the nose guard of his helmet. It didn’t seem right to Rusty that Eddie was standing there, calling the plays, commanding
the situation
as if he had done the job hundreds of times before.

It just isn’t fair, thought Rusty. He knows nothing about football. I know ten times as much as he does.

“Twenty-one?” The words popped out of Rusty’s mouth before he could stop them. “Why don’t you have Bruce or somebody run it
again? We don’t want to try a pass
yet!”

Eddie’s brown eyes swung to him. Bewilderment filled them for a moment.

Rusty shrugged, his face turning pink. He was glad that his face was in shadow and no one could see him blush.

Play Twenty-one was the favorite pass play Rusty used when the Warhawks really needed to gain ground. It didn’t always work,
but
most of the time it did—when
he
called it and when Rollie Pike was receiving.

It just wouldn’t work now. Rusty was sure of that. Eddie simply couldn’t throw a football hard enough to make a long pass
work.

The team broke out of the huddle, got into formation, and Eddie began barking signals. At the snap he took the ball, faded
back, faked a handoff to Bruce, then heaved the pass to Rusty who was running down toward the left side of the field—running
slowly, so he’d be sure to catch Eddie’s weak pass.

Horror struck him. The ball was sailing high! He stepped up his pace, but it was too late. The ball soared over his head and
hit the ground.

“What did you slow down for?” Bruce shouted at him as they assembled again into a huddle.

“I didn’t think he could-!” Rusty didn’t finish what he was going to say. He felt his face flush again, for the second time
in less than a minute.

Eddie called for a repeat of the play, but
this time Rusty was covered like a tent. Eddie, stumped as to what to do with the ball, was smothered behind the line of
scrimmage for a big loss. On the next play they lost the ball to the Bearcats.

Craig Alo, the Bearcats’ fleet-footed full-back, carried the ball twice for a first down, bringing the ball to the Warhawks’
eight-yard line.

Tension mounted as the Warhawks tried to form a strong wall to stop the Bearcats from scoring a touchdown. The end zone was
well covered for an aerial attack. Rusty and Beans were prepared for a wide, end-around run.

The signals were called and the center snapped the ball.

A quick pass over center! The halfback caught it, sidestepped Bruce, and plunged over for a touchdown.

A few seconds later the Bearcats split the uprights and went into the lead, 7 to o.

Dismay overwhelmed the Warhawks. There they were, heading for another loss.

It was Rusty who tried to pepper them up.
This was something he had learned to do—to instill courage into the guys when they fell behind. Quarterback or not—discouraged
as he was about playing end—he was still a member of the team. He still had to give all he had, and he asked the team to give
too.

His encouraging cries helped, but not enough. The Bearcats came through with two more touchdowns—one on a fourteen-yard pass,
the other on a fifty-six yard run by Craig Alo.

In the second half, after a great return by Beans, Bruce ran for eighteen yards to get the pigskin on the Bearcats’ nine-yard
line. Eddie called for Play Twenty-one again in a desperate attempt to score against the tough, powerful Cats.

The throw was good. But the ball struck Rusty’s fingers, glanced off, and bounced to the ground.

Coach Pearson’s words echoed and re
echoed in his ears.
You’re tall and you have a good pair of hands. That’s why I think you’d be the best guy to put in Rollie’s place. 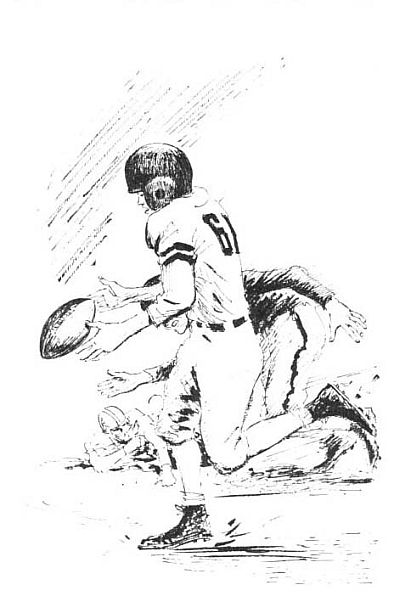