Lulu Bell and the Cubby Fort 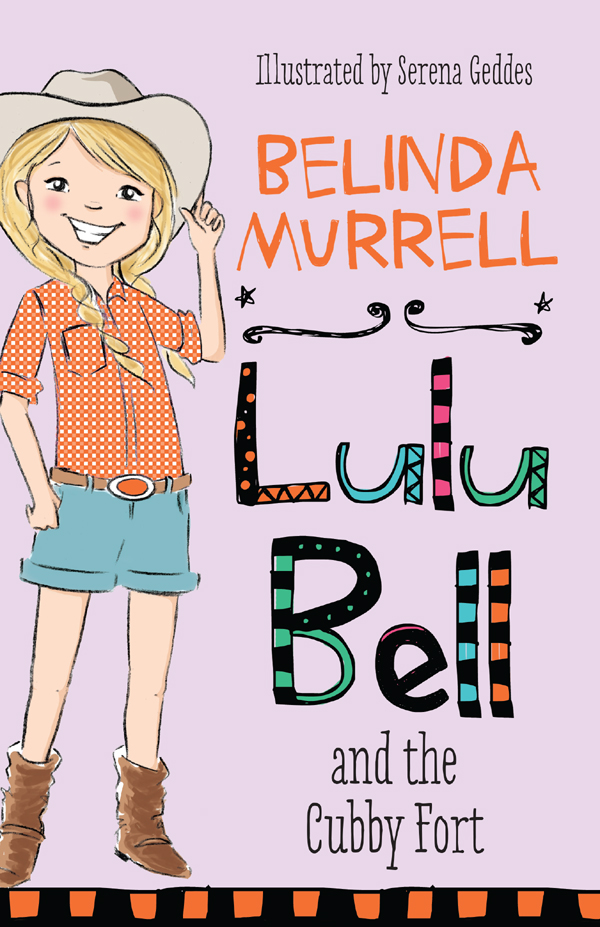 Lulu and her family are visiting their uncle's farm for the Easter holidays. There are horses to ride, a creek to swim in, and they can even sleep outside in a tent. What fun!

Lulu loves being a cowgirl on the farm, especially when all the cousins decide to build the best cubby fort ever. But when she sees a calf get stuck in the mud, Lulu has to find help â fast!

Lulu Bell and the Moon Dragon

Read all the Lulu Bell books 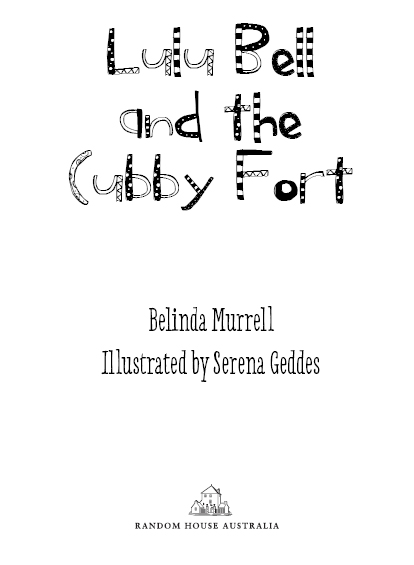 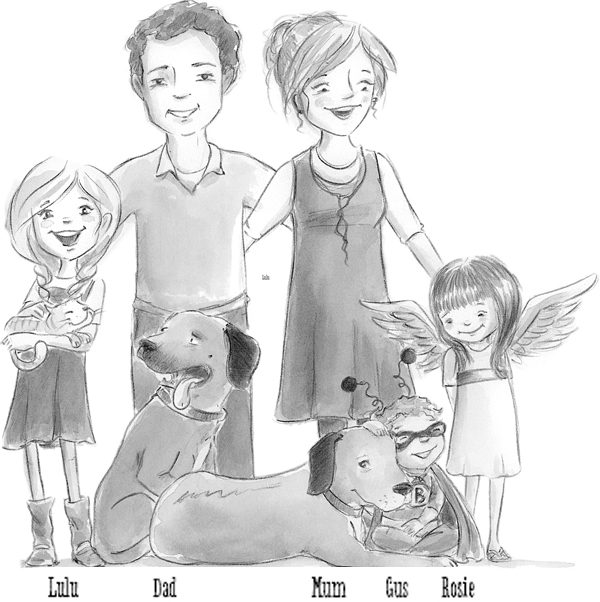 For my brother, Nick, and his wife, Victoria,
for many, many happy adventures at
Sugarloaf Farm. And for Tom, Meg and Gus for
making them so special.

The Easter holidays had arrived and the Bell family was busy packing. They were going to the country to visit Uncle Nick's farm. Lulu Bell and her little sister Rosie were checking that they had packed absolutely everything they would need.

Rosie peered into her bag. âCheck!' she replied.

âLots of books!' Lulu patted another bag, which was crammed full of books.

âGood, then we have everything we need for a perfect holiday,' said Lulu. She zipped her backpack closed.

Lulu put her hand on her hip. âYou're already wearing them, silly,' she said.

âAlthough I'm not sure you'll need them at the farm.

It gets pretty muddy up there, remember?' 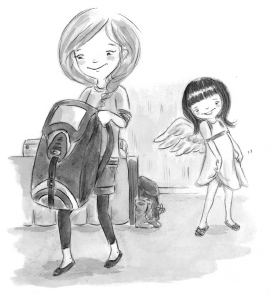 Rosie twirled around and admired her sparkly silver shoes and white dress.

The hall was filled with piles of sleeping-bags, inflatable mattresses, backpacks and boxes of food.

Asha, the family's oldest dog, lay right on top of the pile of sleeping-bags. She was watching the preparations anxiously. She hated to see her people packing until she knew whether or not she was included in their adventure.

Mum staggered in from the kitchen. She was carrying a blue esky laden with food.

âAre you packed, girls?' asked Mum. She placed the esky by the front door.

âYes, all done,' said Lulu. âDid you remember to pack the marshmallows, Mum?'

âOh, no,' replied Mum. âI knew I had forgotten something. Would you mind
fetching them from the pantry please, honey bun?' 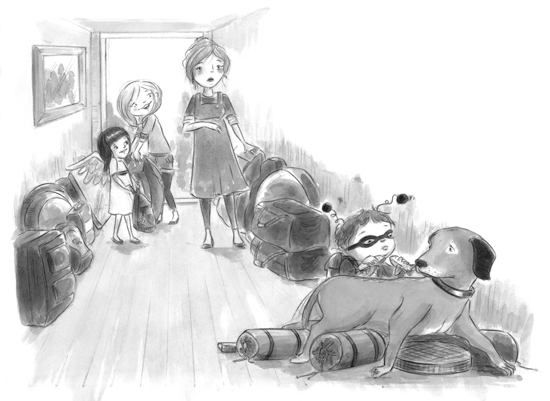 At that moment, Gus came charging down the hall.

He had a pack on his back and a toy plane in each hand. As usual,
he was wearing his favourite outfit â the green-and-red superhero suit that Mum had made him for his third birthday. He loved it so much he never took it off.

âBbbrrrooooooommmmmm,'
shouted Gus. He brought the planes in for a perfect landing on Asha's back.

âLet me see what you have packed, honey bun,' said Mum.

Gus dropped his backpack to the floor and zoomed to
the front door. Mum opened the bag.

âSix superhero action figures, seven toy cars, a bar of chocolate that I'm sure I hid in the esky, three water pistols and a spare Bug Boy mask. Hmmm â do you think perhaps we should take some clean undies for you, Gus?'

Gus paused to think, then shook his head. âNo room,' he said. Gus zoomed back towards the kitchen.

Mum laughed and shook her head too. âHe's adorable.'

âI not '
dorable
,' Gus shouted from the kitchen.

Lulu and Rosie raised their eyebrows at each other and giggled.

âRight, well â I'll get the marshmallows,' said Lulu. She threw one honey-coloured plait over her shoulder. âDo we need anything else, Mum?'

Mum checked the pile of bags, boxes and sleeping-bags. Asha looked up at her with big brown eyes. She whined, thumping her tail against the wall.

âThe dogs!' said Mum. âCan you and Rosie get their beds, bowls and food, please? I'm going to grab some clothes for Gus.'

At the word âfood', Asha jumped to her feet. She galloped down the hall towards the kitchen, her tail wagging madly. She looked back over her shoulder with her tongue hanging out, as if to say âhurry up!'

Asha's daughter Jessie was already waiting in the kitchen. She sat right beside the pantry, her mouth spread in a wide grin. Jessie was definitely the smiliest dog in the world.

âIt's not dinnertime yet,' said Lulu.
She rummaged in the pantry for the box of dog food and the marshmallows. âIt's just packing time â we're going on holidays!'

She dragged the two dog mats along the floor. Jessie thought it was a game. She tried to jump on and off the mats as they were pulled along. She was much too heavy for Rosie to drag, so they made hippity-hoppity progress.

âJessie,
off
,' commanded Lulu in her sternest tone.

Jessie looked up at Lulu, then she slunk off the mat and sat by the door. 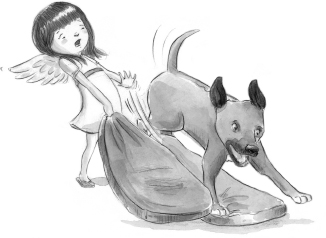 Lulu and Rosie added the dog gear to the pile in the hall. Mum was carefully checking her list. She added an easel, a huge box of paints and four large canvases.

âGoodness, I don't know how we'll fit it all in the car,' said Mum. âLulu, could you pop next door and see if Dad's finished yet? Remind him he needs to help pack everything into the car.'

Lulu's dad was a vet. A thick green door was all that separated their house from the vet hospital in front.

Kylie, the vet nurse, smiled at Lulu as she came into the waiting room.

âAll set?' Kylie asked. âDon't worry. I'll feed all the animals while you're away.'

Lulu couldn't help laughing. âLabradors will eat
anything
,' she said.

âHe'll be all right,' said Kylie, âbut the poor owners will be watching him all Easter to make sure the socks come out the other end!'

Lulu wrinkled her nose. âEeew,' she said. âI'm glad we won't spend Easter that way. We're going to have so much fun at the farm. We'll go horseriding and swimming in the creek and we'll sleep in a tent. And we'll get to play with our cousins and feed the cows and the chickens. I hope Dad hurries up because I can't wait another moment!'

Lulu helped Dad pack the car. They pushed and heaved the bags around to make room for the dogs. Finally they were ready. Molly came over to say goodbye and wish them all a happy holiday. Everyone climbed into the car and snapped on their seatbelts.

Dad steered the car down the driveway.

Dad stopped the car. Everyone turned around and looked at Gus. He started to cry.

Lulu and Rosie exchanged glances and smiled a secret smile.

Dad turned around and looked at the three children sitting along the back seat. 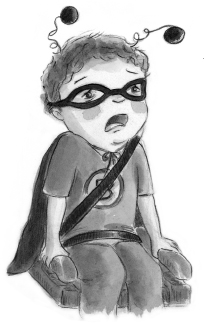 Mum looked at Dad and raised her eyebrows.

Mum unclicked Gus from his booster seat and took him inside the house. A few minutes later they reappeared. Both of them were smiling.

âI can't believe we had to go back for an invisible friend!' whispered Dad.

Mum clicked Gus into his seatbelt and handed him his favourite puppy soft toy. Gus popped his thumb in his mouth.

It was a long drive to the farm. Mum had packed a chilled picnic lunch. There were egg-and-lettuce rolls, crunchy green apples and frozen fruit juice boxes. After
their meal, Gus and Rosie fell asleep while Lulu read.

Three hours later, they finally crossed a clankety bridge and passed through the wooden gate of Uncle Nick's farm. Gus and Rosie woke up and rubbed their eyes.

It was mid-afternoon and the valley was bathed in a warm glow. Black cows grazed on the hillsides. A few young calves twitched their tails as they suckled.
Two chestnut horses hung their heads over the paddock gate. A wisp of smoke wafted in the air from the chimney of the little white farmhouse nestled among the old elm trees. 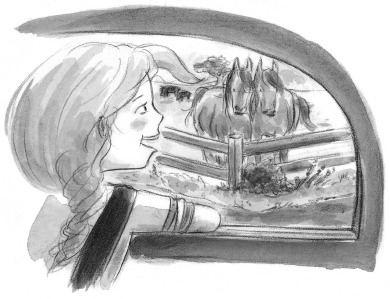 Running Dog by Don Delillo
Bewitched on Bourbon Street by Deanna Chase
Lie to Me (an OddRocket title) by Brahm, Suzanne
Backfire by Catherine Coulter
The Sabermetric Revolution: Assessing the Growth of Analytics in Baseball by Baumer, Benjamin, Zimbalist, Andrew
Club Himeros by Doucette, G
Helen and Troy's Epic Road Quest by A. Lee Martinez
True Detectives by Jonathan Kellerman
My Big Nose and Other Natural Disasters by Sydney Salter
The Best Man by Richard Peck
Our partner