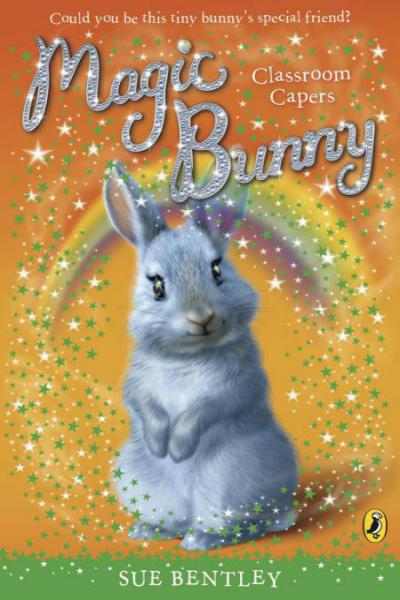 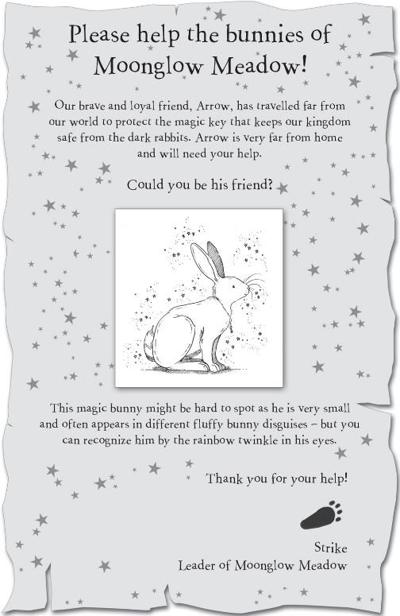 Sue Bentley’s books for children often include animals, fairies and magic. She lives in Northampton in a house surrounded by a hedge so she can pretend she’s in the middle of the countryside. She loves reading and going to the cinema, and writes while watching the birds on the feeders outside her window and eating chocolate. Sue was brought up surrounded by small animals and loved them all – especially her gentle pet rabbits whose fur smelled so sweetly of rain and grass. 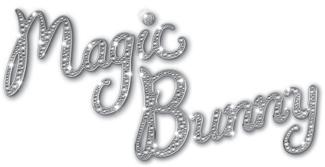 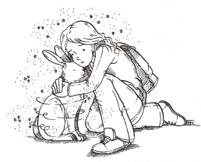 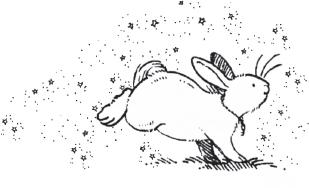 Arrow hopped across Moonglow Meadow. His strong paws kicked up dust from the dry patchy ground. Nearby there was a muddy puddle that had once been a sparkling pool. The spring that fed it was a mere trickle.

He had returned just in time!

The tiny gold key he wore on the chain round his neck glowed brightly and a cloud of crystal dust appeared. It floated down and a fresh carpet of grass and wild flowers sprang up, spreading out over the whole meadow, and the spring began flowing again.

Arrow watched as his fellow magic rabbits began emerging from their burrows. Some hopped over to the pool to drink and others began hungrily eating the new fresh grass.

A large older rabbit with a wise expression and a dark-grey muzzle bounded towards Arrow.

‘Strike!’ Arrow bowed his head in greeting before the leader of the warren.

‘Greetings, keeper of our magic key,’ Strike said warmly in a deep velvety voice. ‘Because of you, Moonglow Meadow is lush and green again.’

Arrow felt a glow of pride at the leader’s praise. As the chosen guardian of the magic key, it was his responsibility to keep it safe.

‘Have the dark rabbits agreed to come and live with us?’ he asked the leader, hopefully. The deep gully next to Moonglow Meadow was home to a neighbouring warren of dark rabbits. Their land had become so dry that nothing grew there any more and they were hungry.

Strike shook his head regretfully. ‘No. They still refuse to share our land.’

‘But how will they survive without our help?’ Arrow asked.

The leader’s eyes darkened with anger. ‘By stealing our key. They want to use it to make their gully green and beautiful again!’

‘But without the key’s power, Moonglow Meadow will become a desert,’ Arrow gasped, his silver-tipped ears flattening nervously.

‘That is why you must go to the Otherworld. Hide there with the key, so the dark rabbits cannot find it.’

Arrow felt very frightened of all the unknown dangers he must face, but he took a deep gulp and raised his head. ‘I will do it!’

All the rabbits hopped towards Arrow and Strike and formed a circle around them. Suddenly the golden key around Arrow’s neck glowed so brightly that for a moment he couldn’t see.

The light slowly faded and where the pure white-and-silver magic rabbit had been now stood a tiny fluffy silver-blue bunny with huge chocolate-brown eyes that twinkled with tiny rainbows.

‘Go now! Use this disguise,’ Strike said. ‘Come back only when Moonglow Meadow needs more of the key’s magic. And beware of dark rabbits. They will try to find you.’

Arrow lifted his tiny fluffy chin. ‘I will!’

Thud. Thud. Thud
. The rabbits began thumping their feet in time. Arrow felt the magic building and a cloud of crystal dust shimmered around him as Moonglow Meadow began to fade …

‘Come on, Wolverines!’ Julia Hill called happily. She tucked a strand of her wavy blonde hair behind one ear as she marched across the lumpy uneven grass. ‘We’ll get team points for putting the tent up by ourselves!’

Julia took a big breath of fresh air. A patchwork of fields, hedges and trees stretched into the distance, where they met the hills. She could see the cotton-wool shapes of sheep on the gentle slopes. It seemed a world away from the busy town where she lived.

She had been looking forward to the school camping trip for ages. It was the first time she’d be spending a whole week away from her parents. She felt quite grown-up at the idea of taking care of herself.

Five of Julia’s classmates from Blakestone Primary School followed her. One of them was lagging behind. Julia wasn’t surprised to see it was Ellie. She was small and pretty, with glittery pink slides in her shoulder-length blonde hair.

‘Wait for me!’ Ellie called, gingerly picking her way between small mounds of sheep droppings. 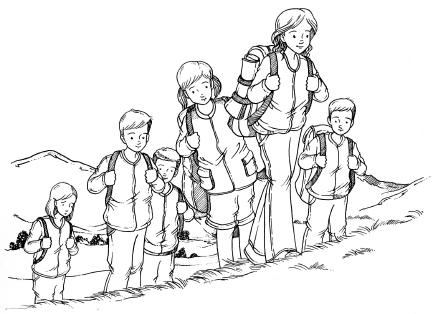 Julia sighed as she waited for Ellie to catch up. When their teacher had sorted them into teams, she had been worried that Ellie might not enjoy the trip. She usually sat on the benches at playtime, while Julia and her best friend, Lucy, played ball games and tag. Lucy was on a family holiday and hadn’t been able to come camping with the rest of their friends. Julia felt a pang of sadness as she thought about the fun they could be having together.

Captain by Phil Geusz
Natural Born Liar: The Misadventures of Mink LaRue by NOIRE
Raisin the Dead by Karoline Barrett
The Comeback Girl by Debra Salonen
My Kind Of Crazy by Seiters, Nadene
Play: Free Romance eBook (Completion 1) by Holly S. Roberts
The Saga Begins [Nuworld 1] by Lorie O'Clare
A Baby by Easter by Lois Richer
Megan's Way by Melissa Foster
House of Storms by Violet Winspear
Our partner