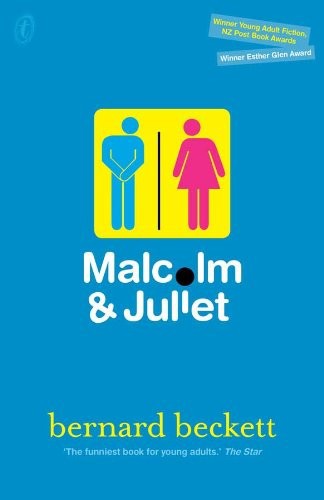 PRAISE FOR BERNARD BECKETT AND
Malcolm and Juliet

‘Beckett has a sound touch for comedy.’
NZ Books

‘Vigorous and lively characters…Beckett has always had a wry humour in his excellent novels about young people on the brink of life, but in
Malcolm and Juliet
, the humour is in charge. This is one of those novels you carry around quoting from…Let me urge nervous librarians, parents and teachers to buy several copies of
Malcolm and Juliet
. And to read one of them.’
Magpies

‘A candid and funny look at the issues of teenage sex and sexuality…This novel began as a script for a school drama performance and it would make a great movie.’
NZ Herald

‘Every line’s a winner in Bernard Beckett’s brilliant, tongue in cheek book. [He] not only writes like a dream but he can read teen minds…a sweetly hilarious farce… Pure bliss and a joke in every paragraph.’
North & South

‘The funniest book for young adults.’
The Star

Bernard Beckett is one of New Zealand’s most outstanding writers. He is the author of the prize-winning novel
Genesis
and works as a high school teacher.
Malcolm and Juliet
is his sixth novel. It won the 2005 New Zealand Post Book Awards, and the 2005 Esther Glenn Award, Library and Information Association of New Zealand Aotearoa.

Other titles by Bernard Beckett

3 Plays: Puck, Plan 10 from Outer Space, The End of the World As We Know It

The paper used in this book is manufactured only from wood grown in sustainable regrowth forests.

Malcolm leaned forward, his feet gripping the side of the bath while his left hand held the towel rail. He kept his weight close to the wall to minimise the forces: simple physics. It wasn’t the most comfortable position in the world and he realised the image it gave was somewhat distorted, but it was the only way of viewing his entire body in the small bathroom mirror above the basin.

Malcolm looked closely, trying to see the positives. His face, when he dipped down to fit it in the frame, was reasonably zit-free. His hair, although longer than the prickly fashion, had a certain style, especially when it was wet. There was no fat on his startlingly white body, and precious little hair, just a tuft under each arm and a goodly sprouting of pubes which he could see no good reason for; something to do with suction he supposed.

Malcolm eyed his genitals. They looked slightly uncomfortable with the angle of his body but otherwise, as far as he could tell, quite normal. His body wasn’t muscular he had to admit, but a particularly generous person might call it wiry. There were definite lines in his legs, when he crouched. Malcolm was a runner, second place in the regional cross-country championships last year. He would have been first if the Science Fair hadn’t interfered with his training.

Next came the most difficult manoeuvre, pirouetting and changing hands so as to be able to inspect the view from the rear. No changes to report. He flexed his buttocks, which he always found amusing, climbed down and began to dress. As he did his mind turned, not for the first time that day, to thoughts of sex.

Malcolm was sixteen and sex had been a latecomer to the party of his life. For some years he had observed the conversations of his peers converge on a single biological act, but he had remained aloof. He had regarded their jokes, boasts and speculation as immature and, far worse, irrational. His had been the role of detached observer: distant, superior and immune. Or so he thought.

For sex is sneaky, and comes dressed in many guises. Malcolm never even saw its approach. He had no chance to fend it off, or more likely, turn and flee. No education-by-internet for Malcolm, no falling in love with the sister of a friend, no thumbing through the pages of a shoplifted magazine. When sex crept up on Malcolm it wore the rather splendid colours of Edgeworth College’s first fifteen.

It happened a month earlier, on the day of the college’s annual sports clash with St William’s, and Mr Fry was really to blame. Mr Fry was Malcolm’s Chemistry teacher. He was also responsible for ensuring all of the first fifteen’s traditional fixtures were captured on camera: the price the school paid for appointing a principal who had once had an All Black trial. Normally Big Willy in Year 12 was the cameraman but he was out with a broken leg and Mr Fry needed a volunteer. Malcolm volunteered.

Malcolm loved sports days. The sports heroes got to strut their stuff, the sports fans got to cheer them on, and even the disaffected could slip downtown for a cigarette without much chance of being caught. Everybody had their place, and now Malcolm had his.

He approached the task with his usual thoroughness. He took home a DVD of one of Big Willy’s earlier efforts, to see how he might stamp his own personality on the filming; he forged a note to get himself out of French forty minutes early, to get some establishing shots, and he picked up the camera from Mr Fry’s room himself, rather than wait for it to be delivered as had been arranged. Mr Fry wasn’t there but the battery was fully-charged and the small external hard-drive sat beneath the coiled firewire cable, inviting him.

It was a perfect day for filming, crisp and clear, the oak trees along the creek marking the green battlefield with a line of autumnal orange. Malcolm’s first plan was to roam the sidelines, hoping to capture a little of the passion and immediacy of the game with a shaky handheld effect. He soon realised this wouldn’t be possible. The camera acted as a magnet, drawing towards him the many illegally released students who wandered the grounds, studiously ignoring the hockey and netball matches assigned to the spectator-free morning. And they weren’t intimidated by Malcolm the way they would have been by the fully-bearded Willy. They came close, peering at the lens and filling it with rude gestures and imaginative obscenities. Malcolm had to escape.

Hope appeared in the form of scaffolding which painters had erected alongside the school hall (a computer-enhanced photo of the building had appeared on the cover of the school prospectus and it looked so good they were now touching up the real thing). The painters were off on their lunch break and it was just a matter of getting past Ms Scott, the fearsome sports teacher who stood guard beneath it. Luckily Ms Scott was known to be partial to grovelling. Malcolm grovelled. Minutes later he was positioned with a fine view of the field, well beyond the reach of his bored peers.

Then Malcolm waited and, as was its habit, his mind began to wander. He thought of computers and he thought of Mathematics, but mostly he thought of the Science Fair. Closing date for proposals was only a fortnight away and still he hadn’t come up with a project. To many people, that might not have seemed like the sort of thing worth worrying about, but then Malcolm wasn’t like many people. Malcolm was a Scientist, and there wasn’t a thing in the world that mattered to him as much as Science mattered.

So Malcolm thought, and when thinking did him no good, Malcolm worried. And in his worrying, Malcolm lost track of the time. He was brought back to earth by the sound of the referee’s whistle, starting the game. Malcolm panicked. He tried to turn, focus and press
record
in a single fluid motion. Two out of three ain’t bad. For the camera was set in replay mode and his furious stabbing at the record button did nothing more than plunge him deep into the sub-menus of Mr Fry’s hard drive.

And so Malcolm was introduced to the world of pornography, for there amongst the bits and bites of the science teacher’s obsessions, Malcolm stumbled upon three hours of moderate quality digital filth. Malcolm felt puzzlement, fear and captivation in rapid succession. He could quite easily have stopped it there, returned to capturing the better part of the game but the scenes unfolding on the pixelated cones of the flipout LCD screen would not let him go. Without words the plot was difficult to follow but he assumed it was something along the lines of a French farce. The action itself was less ambiguous. The images filled Malcolm’s mind, and then his body. He felt the strangest feelings, new feelings, pleasant feelings, feelings he had absolutely no intention of resisting.

In this way Malcolm came to spend the entire game perched two metres above Ms Scott’s blonde bob, his camera pointed in the general direction of the rugby, but his mind caught up in the sexual gymnastics unfolding before him.

The next day Malcolm made the decision that was to change his life. This year, for his Science Fair entry, he would make a documentary, a documentary on sex. It was just a matter of finding the right tone.

Down in the basement of her home Juliet read the letter again. There was no mistaking its tone. Measured, confident, threatening. Anonymous of course, and in a strange way something of a relief. Looking down at the message in front of her, in definitive black and white, Juliet realised that for the last six months she had been expecting to read these very words.

I must inform you that your secret is no
longer safe. Don’t bother trying to discover
how I found out. I did. I’m sure you would
prefer this to remain just between you and
me. My silence can be bought. I require a one-off payment of $1000. I can guarantee
this will be my only demand. To buy yourself
some time, complete the following intention-to-
pay form and send it to the box number
at the top of this letter. You will be given one
month to find the money. Should you decide
to tell anyone about this letter I will be
forced to go public.

Thank you in advance.