Read Marine Ever After (Always a Marine) Online

Marine Ever After (Always a Marine) 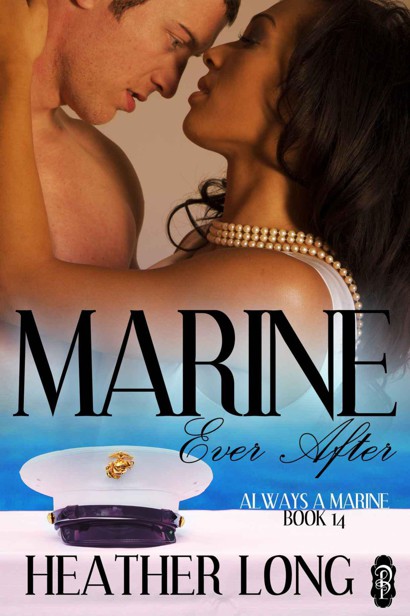 Home to Hellas by Stephanie Beck

Something to Howl About by Azura Ice

Mergers and Acquisitions by Sorcha Mowbray

Escape to My Arms by Heather Thurmeier

One Night with the Bride by Sara Daniel

The Midnight Masquerade by Monica Corwin

The Perfect Sub by Jayson Locke

The Governess and the Beast by Karyn Gerrard

What Part of Marine Don’t You Understand by Heather Long

Another Night, Another Planet by Jessica Subject

A Marine Affair by Heather Long

Remember Me by Amaleen Ison

Dom of the Dead by Virginia Nelson

What Part of Marine Don’t You Understand

For Nan, because she taught me to never give up
.

What was it about formal dresses that they always itched? Lillianna tugged the bodice and tried not to squirm. Of course, it might not be the dress. She’d purchased a bra on her way to the ceremony. She meant to get a nicer one, but didn’t own that many strapless bras and two hours before she needed to get dressed didn’t leave her enough to time to track one down with the perfect fit, so she deserved the discomfort. Had it really been a year since Rebecca asked her to be a bridesmaid? A year of planning this wedding gave her plenty of time, but she still found it hard to believe Rebecca was getting married.

The bride in question swept into the room—the picture of a fairy princess in her cascading tulle ball gown.
Did I expect anything else?
Shame slithered through Lillianna. She could have been a better friend over the last few months and helped with the planning, but instead she let her personal grudges get in the way.

A half-dozen bridesmaids ooh’d and aah’d over the dress, from the sweetheart neckline accented with ornate lace appliques on the bodice, to the tiara fastening her veil in place.

“Lily!” Rebecca’s eyes lit up when their gazes met, and she let out a laugh. Ignoring their dresses, the bride-to-be wrapped her arms around her in a fierce hug. “I worried you wouldn’t make it.”

“I wouldn’t miss your wedding for anything in the world.” Not even after three straight nights on call.

“You weren’t happy about Luke.” Rebecca’s voice dropped, but wicked teasing glinted in her eyes.

“Hey, I’m just glad he got his head out of his ass where you were concerned.”

Admittedly, Lillianna found it hard to be happy for her—at first. She and Rebecca met during their freshman years in college and spent the next four as roommates. She’d heard all about Luke Dexter and watched his lack of response crush the vivacious woman over and over again.

“He loves me.” Rebecca held her hands tightly. “And I’m
happy
.”

“Okay. Then that’s all that matters to me. You’re a beautiful, beautiful bride.” Lillianna stepped back and held her arms wide so she could take in the full picture.

Taking her cue, Rebecca turned a full circle. “I feel beautiful in this.”

“Good.” Lillianna appreciated the strapless midnight blue evening gown she wore as one of the bridesmaids. The maid of honor joined them—the fabulous Lauren Kincaid looked so glamorous, Lillianna didn’t have to worry about anyone staring at her.

“Hi, I need to steal Rebecca for a second. Luke sent me with a present for her.” The actress beamed and Lillianna waved her off. The church wedding had turned into a huge affair, including a half-dozen bridesmaids, a maid of honor, three flower girls, the same number of groomsmen, and promised to be a full house. Apparently, as many of Luke’s unit as were able had also shown up.

Which meant she would be swimming in Marines.
Joy and rapture
. Lillianna checked her makeup one more time in the mirror. She’d gone with silver accents in her eye shadow, and it added just the right amount of sparkle to her dark cocoa skin. Rebecca had chosen fantastic dresses. They flattered every single bridesmaid. The dark blue of their gowns would complement the groomsmen in their formal blues. A shiver of apprehension rippled through her belly. She always loved the way Marines looked in uniform, but she didn’t envy the life one had to live. A military brat, Lillianna didn’t bother romanticizing military life.

“Hey.” A brunette passed her a glass of champagne. “We’re toasting our bride one last time before we report for the wedding.”

She hadn’t met all the bridesmaids, but if she had to peg one for military, this one would be. “Thank you. Lillianna Hansen.”

“Jasmine Cavanaugh, but call me Jazz.” They exchanged a quick handshake. “I’m starting to enjoy the fact that we went really small with our wedding.”

“No kidding—are there really four hundred guests?” She followed Jazz over to the circle forming around Rebecca.

“And a thousand more probably, at the reception. These two are really popular.” Her easy grin drooped faintly on one side, an echo of trauma—stroke seemed the most likely culprit, but maybe a battlefield injury.

“Ladies.” Lauren led the toast, raising her glass and waiting until the rest of the women did the same. “I’d like to just take a moment to wish Rebecca all the best in her marriage to Luke. It’s been my distinct pleasure to get to know her over the last several months. We’ve worked together on so many projects that I can’t help but think the best thing our men ever did was introduce us to each other.”

Glasses clinked together and after a sip, Rebecca cleared her throat. “I wanted to say thank you—I know there probably won’t be a lot of time later—especially if the party goes the way I planned it.” More laughter met her statement. “But thank you, all of you, for being here with me today. From Lillianna, my college roommate, who listened to me cry myself to sleep and didn’t mind holding my hair back after one particularly bad spring break of drinking, and still wants to be my friend. To Lauren and Jazz who’ve become such a fundamental part of the life Luke and I are building. To Tina and Janey, who believed in Intimate Introductions before I even did, and to Delilah even though she couldn’t be here—” She coughed, blinking furiously.

“Thank you for being here tonight, for the fittings, the planning, the dozens of emails, and for not hating me for wanting it all to be so perfect. Tonight is a dream come true for me and as soppy romantic as it sounds, a night I’ve planned since I was fifteen-years-old.”

“And how!” Tina echoed the sentiment. They clinked their glasses together for the second toast and then sipped.

Rebecca glowed with happiness. Lillianna didn’t try to contain her smile, and it was time to let go of her misgivings.

A clock chimed and Jazz collected the glasses. “It’s time to get moving. We need to have Rebecca ready in fifteen minutes, ladies!” They rushed to double-check faces, hair and to fluff the bride’s skirt, but ten minutes later, Lillianna trailed behind Jazz down the long aisle decked out in roses, patriotic ribbons and candlelight.

The service was standing room only. Lillianna couldn’t get over how fine the men in their uniforms looked, arrayed alongside the captain marrying his bride. Few dry eyes were in the house during their heartfelt vows and the cheer that erupted with their kiss sounded a lot like ‘oorah!’

The wedded couple led the way back up the aisle with a uniformed groomsman for every bridesmaid offering his arm as escort. Drunk on the abundant love during the ceremony had to be the only explanation for the quiver in Lillianna’s stomach when her escort extended his arm and she slid a gloved hand through to rest on his forearm.

It had nothing at all to do with his crisp and pressed appearance, powerful bearing, or saucy little wink.

Not a damn thing.

Paul eyed the bridesmaid from the moment she’d made her entrance through the double doors. As the fourth groomsman, he’d get to escort her out.
Thank you, Jesus
. Gorgeous was the only word that would do. Not that the other bridesmaids weren’t good-looking. Jazz looked damn fine and if he stared too long, one of her two husbands might be inclined to take his head off. All in good fun, at least on Zach’s part, but Logan stood right next to Paul.

Better to keep his eyes on the more attractive prize. From her rich, dark hair piled atop her head, to the deep, natural, rich cocoa of her skin. He hesitated to call it brown, but the white gloves and deep navy of her dress looked so smashing against her skin tone. His training kept his gaze forward as they walked together, so he barely got a glimpse of her eyes. Sadly, the evening wedding meant the sun was already sinking as they exited, and the shadows lessened the chance he could tell what color they were.

Photographs would be next and then a drive to the reception at Mike’s Place. If he played his cards right, they’d be in the same limo.
But we have to dance
…. A smile curved his mouth. He would have plenty of opportunity to stare at her eyes and determine their color then.

“I’m sorry, what?” She glanced at him, a distracted smile softening her expression. It hit him like a fist to the gut. He needed to revise his earlier opinion—gorgeous didn’t do her justice.

“I’m Paul Torres, you must be Lillianna.” The only bridesmaid who’d missed the big rehearsal dinner.
Not that I can complain
…. He almost missed it, too. His flight landed an hour beforehand and only some skillful driving with Damon managed to get them both there in time to be in place before the bridesmaids did their obligatory walk.

“Yes, sorry. I can’t get over how happy she looks.” She let go of his arm and offered her gloved hand to shake. “And I’m Lillianna Hansen.” The urge to kiss it was a little too romance-novel for him, so he shook it then held onto it.

“The captain looks pretty happy, too. I think he got the better end of the bargain.” Paul chuckled. Every man from his unit seemed to be settling down in civilian life, marrying or pairing off. He’d served with most of the men in the groom’s party and earned his invitation when the wedding coincided with his leave. Unfortunately, one of Luke’s best friends—Brody—hadn’t been able to make it. The lieutenant remained on active duty in Afghanistan, but promised to visit the happy couple on his next trip through Dallas—probably to see his girl, the artist, as much as to see Luke.