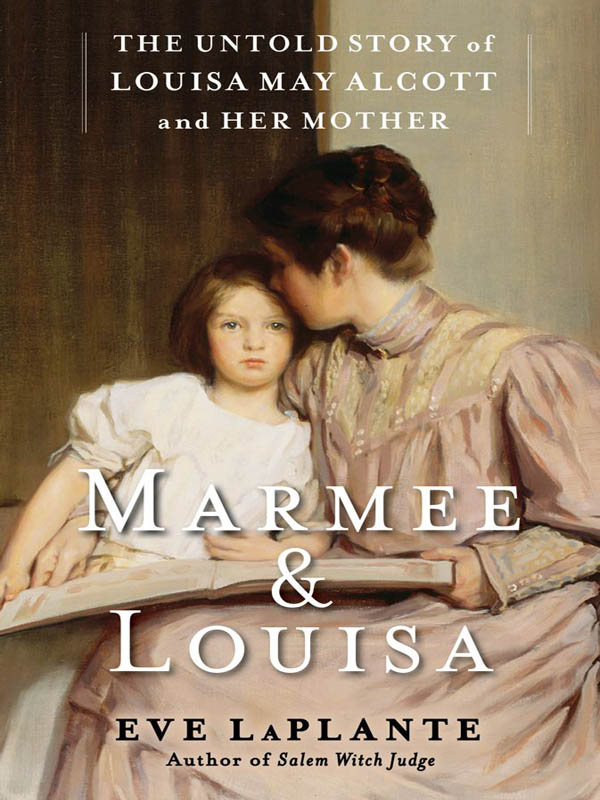 1. A Good Child, but Willful

2. Drawing Toward Some Ideal Friend

4. Sacrifices Must Be Made

6. Looking to My Daughter’s Labors

8. The Best Woman in the World

13. The Bitter Drop in This Cup

15. Welcome to My Fortune

16. Thou Excellest Them All

Conclusion: I Believe in Dreams

Exploring the America of Abigail & Louisa May Alcott 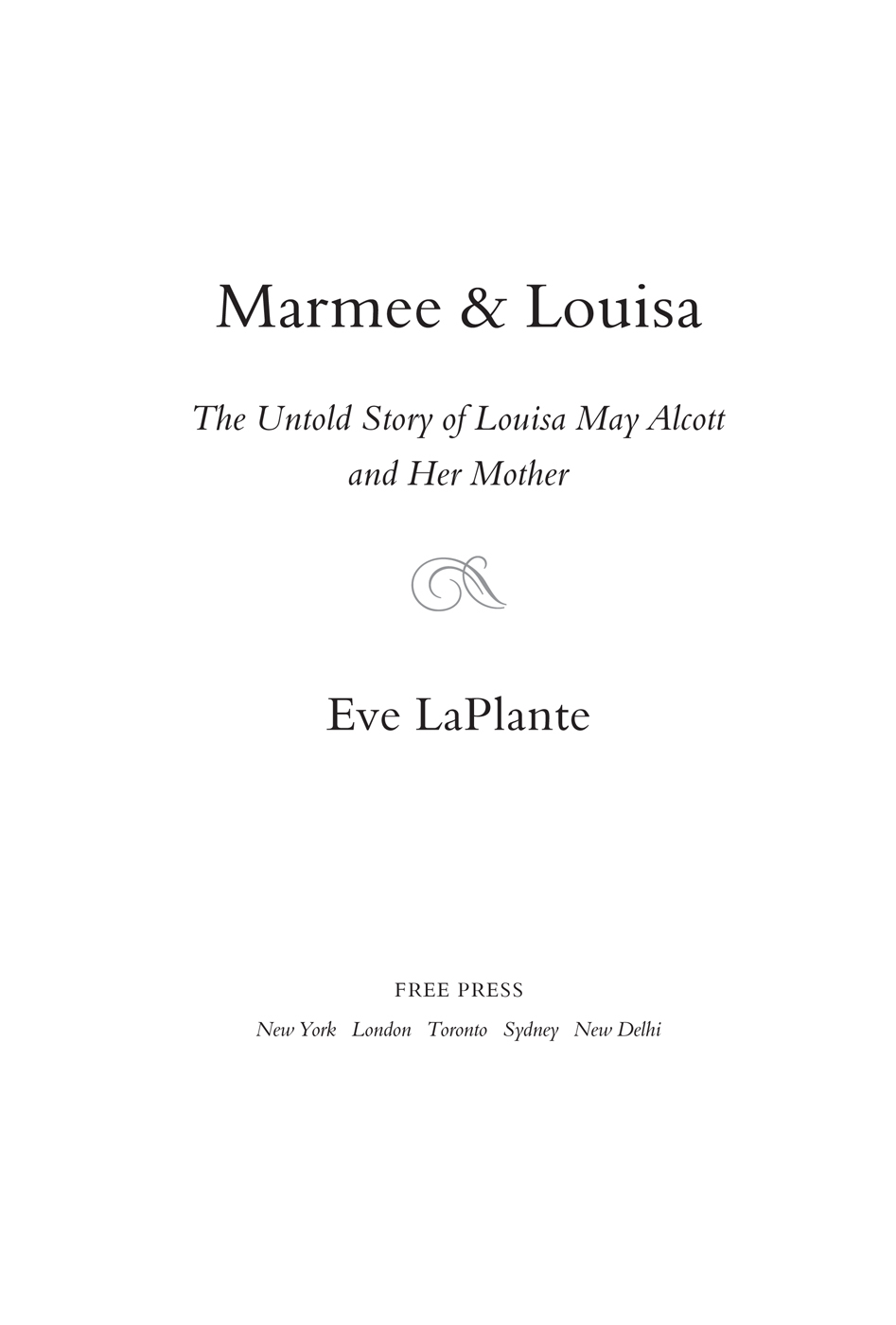 Thank you for purchasing this Free Press eBook.

Mothers are the
best
lovers in the world; but I don’t mind whispering to Marmee, that I’d like to try all kinds. It’s very curious, but the more I try to satisfy myself with all sorts of natural affections, the more I seem to want.

All dialogue and other quotations are from written records, in most cases the letters, journals, and other writings of the Alcotts and their relatives and friends. Nineteenth-century punctuation and spelling stand except when they might obscure meaning. Please see the Notes for sources and citations.

W
ho is Louie?” my oldest daughter asked, holding up a small book with a worn, embossed cover.
1
She and I were kneeling on the dusty floor of my mother’s attic, rummaging through a huge metal trunk containing our ancestors’ belongings. The trunk had arrived decades earlier following the death of an aunt, who likewise had inherited it from her aunt. Inside the trunk, beneath feathered ladies’ hats and a nineteenth-century quilt, my daughter had found an 1849 edition of
The Swiss Family Robinson,
inscribed as a gift:

“That’s Louisa May Alcott,” I realized, remembering that relatives knew her as Louie or Cousin Louisa. In June 1855, our great-uncle George E. May was ten years old and his first cousin Louisa May Alcott, who hoped he would enjoy the tale of a shipwrecked family, was twenty-two. She was staying with other maternal cousins in Walpole, New Hampshire, spending her days gardening and hiking, forming a theater troupe, and inventing “little tales” that she hoped to sell.
2
Her parents and younger sisters would soon join her in Walpole, a “lovely place, high among the hills,” to live in an uncle’s spare house.
3
Deeply in debt, they could not afford to pay rent. Their only regular income in 1855 was her older sister’s small salary as a teacher in Syracuse, New York, where she boarded with George’s family. Louisa’s father, Bronson, recently returned from an unprofitable lecture tour of the Midwest, was planning
a solo trip to England—“not a wise idea,” according to Louisa. Her mother, Abigail, had left jobs in Boston as a social worker and employment agent. The novel
Little Women,
which would give the Alcotts their first taste of financial security, was still thirteen years in the future. But Louisa had already published poems, short stories, and a book of original fairy tales, the start of her remarkable career.

In another trunk my daughter and I found the brittle, handwritten memoir of George’s older sister, my great-great-grandmother Charlotte May, who had grown up with Louisa and whose wedding Louisa had recently attended. Charlotte and Louisa, born a few months apart in the winter of 1832–33, had played games, invented stories, and wandered the woods and hills surrounding their childhood homes. A packet of letters tied with a ribbon contained Charlotte’s scribbled descriptions of her and Louisa’s teenage escapades in Syracuse in the late 1840s. Louisa signed letters to Charlotte, who lacked sisters, “Your sister-in-love.”
4

Charlotte and George May’s father, the Reverend Samuel Joseph May, was likewise his nieces’ “uncle father.”
5
Samuel Joseph had introduced his youngest sister, Abigail May, to Bronson Alcott in 1827 and spent decades providing their family with much-needed financial and emotional support. Samuel Joseph’s published memoir, stuffed with letters in his elegant hand dated from the 1820s to the 1860s, was also in my mother’s attic, along with a crumbling copy of his 1869
Recollections of Our Antislavery Conflict
and an 1823 Bible that belonged to his wife, Lucretia, who became Abigail May Alcott’s closest friend.

At the time of these discoveries, I knew next to nothing about the Mays and the Alcotts, and little of Louisa except for her juvenile fiction,
Little Women, Little Men,
and the rest, which I had devoured as a child. But the treasures in the attic compelled me to explore the mysteries of the May-Alcott family. Their faded, cracking pages led me to read Louisa’s novels and stories for adults, her letters and journals, and the writings of her parents, sisters, and other close relatives.

In the process, I encountered a paradox. While Marmee, Abigail May Alcott’s alter ego in
Little Women,
is universally acknowledged as the central figure in her children’s lives, the flesh-and-blood Abigail seemed in the standard rendition of the Alcott saga to be practically invisible and almost mute. Abigail’s letters and journals, unlike those of her daughter and husband, remained unpublished and largely unexplored.

The more I learned about the Alcotts, though, the more I saw Louisa and Abigail as a pair, each one the person in the world to whom the other felt closest. It was clear that this mother and daughter shared a profound intimacy that had light and dark facets, in which a fierce commitment to female independence coexisted with a mutual dependency. Abigail, I realized, was a vibrant writer, brilliant teacher, and passionate reformer who spent decades working to abolish slavery, ameliorate urban poverty, and allow women to be educated, vote, and engage in public life. She nurtured and fostered Louisa’s career as a writer and entrepreneur, encouraging her daughter, rejection after rejection, to persist. Louisa in turn dedicated all her early work, starting with her first novel at age sixteen, to her mother, who possessed a “nobility of character and talents,” Madelon Bedell observed in her biography of the family.
6
“Louisa was to take these sensibilities and talents and transform them into art and literature . . . . If her fame continues to endure and her mother’s name is unknown, nonetheless the achievement is a dual one; behind the legendary figure of Louisa May Alcott stands the larger-than-life model of her mother, Abby May.” Louisa created “a distinctly mother-centered .
7
. . fictional universe,” according to another scholar, Monika Elbert, “in which children seek a nurturing home, husbands [seek] maternal warmth in their wives, and orphans [seek] a mother-surrogate.” Over the years, in fact, Louisa functioned as partner, provider, nurse, and even mother to Abigail. “The great love of [Louisa May] Alcott’s life . . . was doubtless her mother, whom she idealized as Marmee in
Little Women,
” Elizabeth Lennox Keyser wrote. In short, Abigail was Louisa’s muse.

Yet Abigail’s story seemed never to have been told. Basic facts, such as the place of her birth, remained undiscovered.
8
Abigail was always portrayed as a housewife, while her husband was seen as Louisa’s mentor. “Louisa May Alcott was so dominated by her father,” the biographer Susan Cheever wrote, “that it is hard to unravel their lives from each other.
9
. . . In every big decision [Louisa] made, her father hovers in the background. His hold on her was incalculable.” Madelon Bedell referred to “Bronson Alcott’s great-granddaughter” as if she were not also descended from Abigail. “Even though [Bronson is] hardly present in [
Little Women
], his was the powerful personality that lay at the heart of the legend” of Louisa May Alcott.
10
Collections of American literature invariably described Louisa as the student of men: “Raised in Concord,
Massachusetts, and educated by her father, Alcott came under the influence of the great men of his circle: Emerson, Hawthorne, the preacher Theodore Parker, and Thoreau.”
11
Even a feminist study of nineteenth-century women writers suggested that Abigail exerted no intellectual influence on Louisa, who “was taught by her father and also introduced to men of great influence, including Ralph Waldo Emerson, Nathaniel Hawthorne and Henry David Thoreau.”
12
No anthology or biography portrayed Louisa as “taught by her mother and also introduced to women of great influence, including Elizabeth Palmer Peabody, Lydia Maria Child, and Margaret Fuller.” Yet that statement, I discovered, is equally true.

Billy and the Birdfrogs by B.B. Wurge
Game: A Thriller by Anders de La Motte
city of dragons 02 - fire storm by crowe, val st
Waiting in Line for the New iPad by Max Sebastian
Dangerous Beauty: Part Two: A Mafia Princess by Michelle Hardin
The Super Spies and the Pied Piper by Lisa Orchard
Summer on the Short Bus by Bethany Crandell
And The Beat Goes On by Abby Reynolds
Found by You by Victoria H. Smith
A Finer End by Deborah Crombie
Our partner