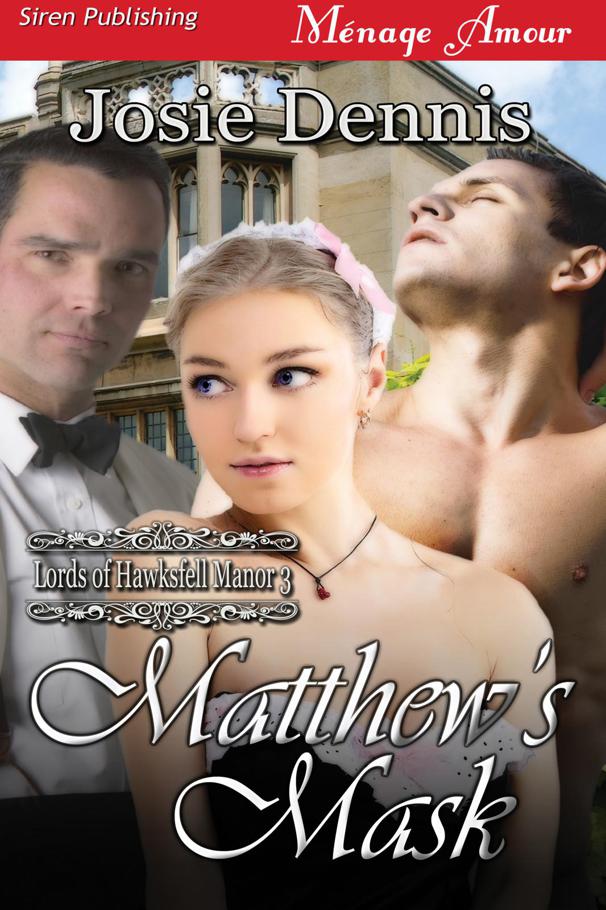 Posy Davidson, a maid at the manor, has a sordid reputation. She loves footman William Beckett, but Matthew was her first lover. They rekindle their passion, but she still wants William. She’s afraid she’s as bad as everyone thinks.

William and Matthew both want Posy, but can’t deny their own attraction. They agree to share her and each other. Matthew wants to love them but learned to hide his feelings from his abusive uncle.

When the earl throws a masked ball in Matthew’s honor, Posy and William attend in disguise. The three of them flirt and dance and their passion reaches its pinnacle. But can Matthew drop his mask and show them his heart?

If you have purchased this copy of
Matthew’s Mask
by Josie Dennis from BookStrand.com or its official distributors, thank you. Also, thank you for not sharing your copy of this book.

This is Josie Dennis’s livelihood. It’s fair and simple. Please respect Ms. Dennis’s right to earn a living from her work.

Matthew Hawk stared at the attorney, his mouth agape.

Matthew blew out a breath. “You regret it all you like. I don’t.”

The man cleared his throat and shuffled the papers on his desk, his head bowed. The call to the attorney’s office in London wasn’t unexpected, now that his father—make that his uncle—dropped dead last month. Matthew didn’t expect to inherit much coin, that was certain. Hawks were blessed with their finances, or so the late Viscount Lindhurst always said. Pity he was as loose with his money as he was with his seed.

“You’re still heir to his property,” the attorney went on, adjusting his glasses to peer up at him. “And you now hold the title of Viscount Lindhurst.”

“And little else save for my own money, isn’t that right?” Matthew finally sat back down in the chair across from him. “Bloody beautiful.”

“The viscount had debts that had to be paid, my lord.” His cheeks reddened. “It seems there were several women in the village who he—”

“Fucked and abandoned?” Matthew cut in. “Don’t worry about my sensibilities, Sims. I know what a bastard my father—excuse me, my uncle—was. He was a hypocrite as well.”

“Be that as it may, you have claims on another estate.”

“My real father’s? Tell me he’s dead, too. That will save me the trouble of confronting the man who fucked and abandoned my mother.”

A memory came to him, that of the sweet woman who’d raised him until he was nine years old. That was precisely when the viscount had taken over, sparing Matthew neither his tongue nor his fists in his effort to “make him into a man.”

It was a blessing the bastard died in that public house last month, collapsing on the poor girl unfortunate enough to take his coin for a tumble. Though Matthew had grown as big and strong as the man, the verbal jabs never ceased. Matthew’s hold on his restraint to pay him back in full had been tenuous at best.

“Yes, the late Earl of Hawksfell went down with the Titanic in April.”

“Screwing his way across the Atlantic until it struck the iceberg, no doubt.”

The attorney gasped, and Matthew waved a hand at him. “Don’t expect me to mourn a man I never knew, Sims. I’m certain he was like every other Hawk in our part of England. A rutting bastard with no conscience or responsibility, save for legitimatizing their offspring.” He laughed without humor. “Although my father didn’t even do that, did he? No, he let his brother raise me.”

“The truth of your sire was always in these papers, my lord,” Sims said. “I wasn’t at liberty to divulge it to you, and apparently, your uncle never saw fit to do it either.”

“Yes.” Matthew thought about the many things his uncle kept from him. “No doubt he feared I’d finally lose my restraint and punch his perfect teeth down his throat.”

Sims blinked. “I have the information on the current Earl of Hawksfell, my lord.”

“The brother I never knew I had. Well, half-brother. We Hawks are all ‘half-something or others’ aren’t we?”

“I’m afraid so.” More paper shuffling, then Sims sighed. “Do you wish me to pen a letter to the earl?”

“For what reason? So that he can deny me my rights as one of the late earl’s legitimate heirs? He did legitimatize me, didn’t he?”

“Yes. Here are copies of the papers he signed right after you were born.”

Matthew took the papers and stood again. “At least I won’t have to prove that on my own. Where is this Hawksfell Manor?”

“In Yorkshire. It sits just outside the village of Helmsley, my lord. On the moors.”

“Helmsley? I’ve been at the inn there. Last spring.” Matthew thought for a moment, recalling just what he’d gotten up to at that inn set in the shadow of his then-unknown brother’s estate. “Thank you, Sims.”

Sims nodded, and Matthew left the attorney’s office. His motor sat waiting at the curb, and it was a finely-outfitted vehicle. His uncle might have been lousy with saving money, but he’d been adept at making it. Matthew carried that trait along with the Hawk lusts, and his own fortune had grown in the past few years. Now he was twenty-six years old and wealthy in his own right. Even before this new development. He directed his chauffeur to take him home to Lindhurst and sat back on the leather seat.

He’d never tried to contain his Hawk beast, not since he’d reached puberty. If he did, pain would consume him until he found release. No, he’d taken his pleasure anywhere and with anyone despite the consequences when his uncle unerringly learned of it. Funny, but he’d always beaten or berated Matthew for giving in to his baser urges even as he fucked everything that moved.

Why shouldn’t Matthew take his lusts as a gift instead of a curse? He gave as much pleasure as he took. He could fuck forever, in a groom’s ass or a serving girl’s pussy, and used his mouth and hands to make them come, too. The people around Lindhurst Manor knew what a Hawk was and what a Hawk could do. He was always kind with his words and generous with his coin. He always made certain to leave them happy. But leave them he did.