Tags: #'contemporary gay romance, #a lost soul finds his way home, #after suffering the fates of hell one lover cannot forgive himself his past and jeopardizes his future happiness, #an elite investigation agency becomes home to two men meant to be together, #an undercover cop is imprisoned and tortured, #boyhood friends become lovers after a tragedy brings them back together, #finding redemption with the one you love, #learning to forgive yourself, #nightmares and demons plague him, #their attraction is undeniable' 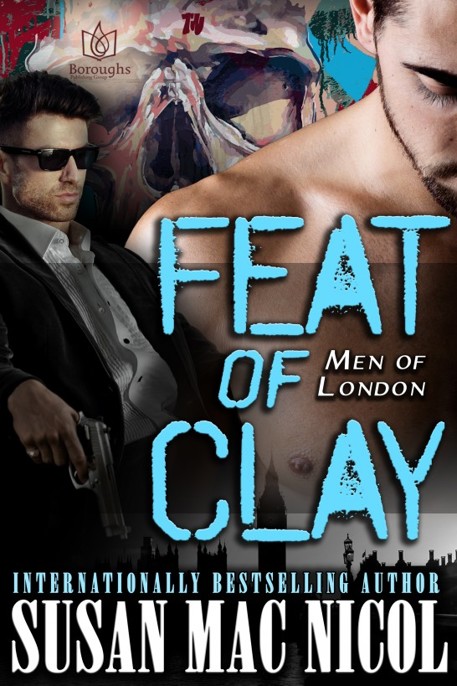 Though they went their separate ways, Tate Williams
and Clay Mortimer have been crazy about each other since their
school days. Clay went into the SAS. Tate became a cop. Neither
mentioned their attraction to the other. Both sought out danger.
Both found it.

Imprisoned and shot in an undercover assignment gone
wrong, Tate somehow survived…and found his way back into Clay’s
arms. His old friend is now the owner of an elite investigation
agency and everything any man could want: patient, handsome,
commanding. And Clay knows what it takes to survive. But Tate can’t
bring himself to share all his secrets, nightmares that force him
to rebel against
everything
. He finds
solace from his past as a graffiti artist, a childhood passion, but
his demons drive away all who might care for him. Only when he
faces that past—and learns that everyone has tasted despair—can the
two men truly be brothers-in-arms…and more.

PUBLISHER’S NOTE: This is a work of fiction. Names,
characters, places and incidents either are the product of the
author’s imagination or are used fictitiously. Any resemblance to
actual events, locales, business establishments or persons, living
or dead, is coincidental. Boroughs Publishing Group does not have
any control over and does not assume responsibility for author or
third-party websites, blogs or critiques or their content.

All rights reserved. Unless specifically noted, no
part of this publication may be reproduced, scanned, stored in a
retrieval system or transmitted in any form or by any means,
electronic, mechanical, photocopying, recording, or otherwise,
known or hereinafter invented, without the express written
permission of Boroughs Publishing Group. The scanning, uploading
and distribution of this book via the Internet or by any other
means without the permission of Boroughs Publishing Group is
illegal and punishable by law. Participation in the piracy of
copyrighted materials violates the author’s rights.

This book is dedicated to those
out there who battle daily with stress because something in their
past haunts them. Sometimes this past cannot easily be put to rest.
Depression, bipolar disorder, PTSD and other illnesses affecting
mental health are a real challenge for anyone to face.

There is help out there. I
encourage those in need to seek it and contact a local organisation
or helpline. These are just a few links, but there are many more
out there to find out how you can overcome.

As always I’d like to thank my lovely beta readers
Rita R. and JP Bilbao for their valued input with this story. I
hope they know how much I appreciate them both.

To the wonderful ladies of Nicky’s Starrlettes—Kirsty
Vizard, Valerie Degeorge, Janice Birnie, Isa Jones and Joanne
Swinney—who do so much to support and encourage me, I thank you
from the bottom of my heart. When I’m down or feeling insecure and
need a kind word, you ladies are always there to cheer me up and
kick my arse to get me back on track. I can’t tell you how much I
appreciate being told to ‘Bloody get out there and just write. We
want the next book!’

About the
Author
Other Books by Susan Mac
Nicol

The naked man lying shivering on the cold
concrete floor had no idea of the time or day. All he knew was he
hurt in every unimaginable place possible. Curled up into a foetal
ball, he dug his fingers into cold arms as he tried to hug himself
warm. Pain from ragged nails pierced his clammy skin, reminding him
he was still alive, albeit in hell. His mouth was so dry from lack
of water, he couldn’t even cry out anymore. Agony riddled a stomach
clenched and knotted from lack of food; he didn’t remember the last
time he’d eaten.

The only thing keeping him sane was the
silence. As long as that remained, he knew he was safe. It was when
his captor returned to the room that the air was broken with cries
of pain and agonised breaths amidst the whispered gloats from his
torturer of just how much his keeper could make him suffer. So when
the man on the floor heard the click of the door lock opening, his
stomach heaved in fear and pain. He retched strings of bile,
knowing that what was coming was far worse than lying broken and
beaten half to death on a cold floor.

“Ready for me?” The hated voice was mocking.
“Let us begin again.”

“You bastard, leave me alone. Fucking leave
me alone, will you? I won’t tell you anything. Fuck off.”

Clay Mortimer woke to these words being spat
into his ear as an arm beside him thrashed wildly in the throes of
a nightmare. It was nothing new; he’d faced this scenario many
times. His chest tightened with agonising pain at the utterance of
words borne of an experience no man should have endured.

Awake instantly, thanks to his past training
in the SAS, Clay reached out and gripped the wrist of the man
floundering next to him in their bed. His other hand reached out
and pressed itself into his lover’s scalp with its thick covering
of russet fuzz. Clay’s gentle fingers pushed the fevered brow back
onto the pillow, trying to stay the man’s agitation.

As Tate Williams’s cloudy hazel eyes opened,
panic rife in their depths, Clay stroked his lover’s forehead and
murmured soothing words of comfort. “Easy, it’s just a nightmare.
It’s over. Look at me.” His words grew in urgency as Tate stared at
him, no recognition on his face. Clay’s stomach tightened and he
lost his breath, the familiar anguish with which he lived rising in
his chest.

Tate’s eyes slowly cleared. “Clay?” He
blinked, his gaze focusing as his trembling hand came up and held
onto Clay’s arm tightly, making him wince. He was used to bruises
as Tate came out of his fugues. Clay’s partner needed to make sure
the man beside him was real, solid.

“I was dreaming…” Tate whispered as he passed
his hand across his eyes. “Armerian was there.”

Clay swallowed, the mention of the other
man’s name making his gorge rise, and his blood boil in hate and
anger. “Armerian is dead, Tate. He can’t hurt you anymore.” It was
the same litany he repeated every time he drew the man he loved
back from the hell he’d been in. Kidnapped, tortured and
emotionally abused by a madman just over a year ago, the physical
scars on Tate’s body may have healed, but his mind was another
thing. He was tough and proving steadfast in his attempt to get
through each day, but to get his head to its current state had
taken a lot of time, tears, frustration and grief. Clay had no
doubt there was more of it in store.

Tate nodded slowly and sat up, the covers
slipping down his muscled, lightly furred chest, to pool on his
hips. “I know. I remember.” His upper body was soaked in sweat, the
dark curls on his torso damp and matted. Faint silver scars
transacted his belly and ribs like a grid. Two deeper, rounder and
thicker indents marked his upper left shoulder and pectoral muscle.
Another one splayed across the left side of his ribs.

Clay sighed. He rose naked from their bed and
walked over to the chair. A damp towel still sat there from their
recent shower-sex marathon. He picked it up, went back to Tate, sat
down beside him and dabbed the soft fabric across his face then
across the pools of moisture on his body. Tate watched him do it,
and Clay was glad to see his lips curve in a small smile.

“You’re always looking after me. My very own
defender—my knight in shining armour.”

Clay snorted loudly. “Well, aren’t we being
literary. I just like to make sure you’re okay, that’s all.” He
finished what he was doing and threw the towel to the floor. He
stood up to move around to his side of the bed and Tate reached out
with both hands to grip Clay’s hips.

Despite the fact his partner had just woken
from a nightmare, Clay’s cock stirred at the feel of Tate’s warm
hand on his skin and the desire in his eyes. Sex had become
something of a sleeping aid to Tate, as he used it to dispel the
nightmares he held. For the most part, Clay was fine with that.
Sometimes, though, he felt as if he was simply a distraction, a
living, breathing placebo for Tate to find his inner solace. He
supposed wryly that there were worse ways for his partner to deal
with his issues than using Clay as a human dildo.

“Stay there,” Tate murmured as Clay’s dick
began its slow rise upward. “I want to taste you. Then you can fuck
me.”

As Tate’s lips closed over his cock, Clay
closed his eyes and gave in to the pleasure.

After Tate was sated and once more resting
uneasily, Clay lay watching the restless form of his lover. The
covers had fallen off and Tate lay on his side, back to Clay.
Tate’s honey-toned skin and the firm curve of his backside were a
welcome sight. Clay reached out gently and traced the tattoo on
Tate’s right arse cheek. It was a dragon, teeth bared, wings
spread, in shades of grey and black. It covered the whole taut
muscle and while it looked stunning, Clay knew it hid something
much more sinister.

Beneath the powerful beast roaring on Tate’s
flesh lay the word
Reino,
carved out with a
scalpel in Tate’s skin by the man who sixteen months ago had kept
Clay’s lover prisoner for four days, tortured him, then shot him
three times and left him for dead in a city street. A snarling
twist of deception had left Tate the victim after his undercover
drug sting went bad. The dragon covered up what Tate thought was a
shameful scar, but Clay, who’d chosen the image for him, had always
thought it reflected his lover’s inner strength and resilience.

Tate stirred and murmured sleepily and Clay
hastily moved his fingers away so he didn’t wake Tate completely.
He settled back in the bed and pulled the duvet up over them
both.

I hope he manages to
sleep
, was Clay’s last conscious thought as he sank into
darkness.
I don’t know how long he can go on like
this.

Tate sighed
heavily as he fielded his way through the three computer screens
set up in his home office. As a researcher and strategist for
Clay’s business, Mortimer Investigations, Tate spent a lot of time
checking out information, inspecting facts and fiction supplied by
snitches and leads and finding the real truth behind the stories.
He’d always been a geek, loving gadgets and anything digital.

“I suppose it’s just as well I had this kind
of interest now that I’m ‘retired’ out of field work,” he muttered
to himself as he logged into yet another government agency site to
collate information for his boss and partner. “I’d rather be out
shooting someone though.”

The Arrow: A Highland Guard Novel (The Highland Guard) by McCarty, Monica
The Hopechest Bride by Kasey Michaels
Until the Celebration by Zilpha Keatley Snyder
The Red Hills by James Marvin
Tides by Betsy Cornwell
Nervios by Lester del Rey
Cole by Autumn Gunn
Memory Scents by Gayle Eileen Curtis
The Dead Men Stood Together by Chris Priestley
Something Had to Give by Trish D.
Our partner