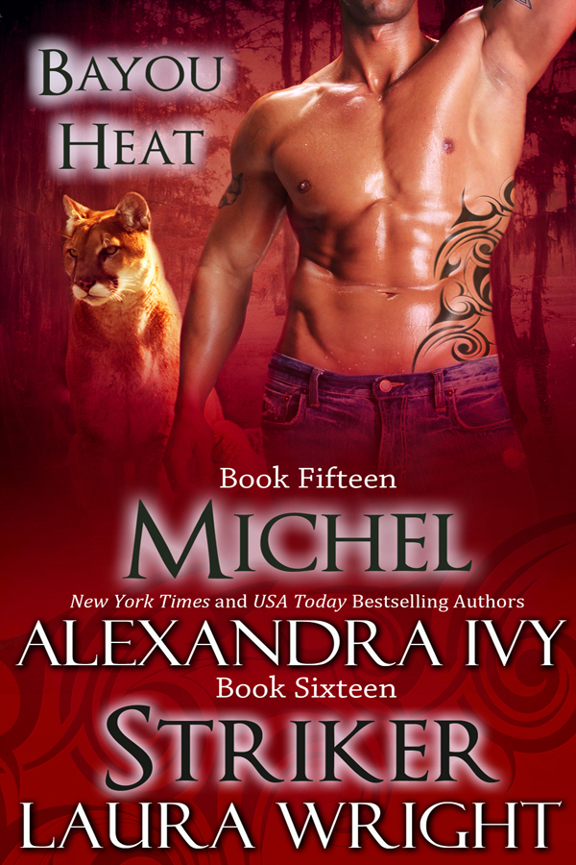 MICHEL
Michel doesn’t trust Dr. Chelsea Young. Why should he? She willingly worked as a researcher for the humans who were using Pantera as lab animals. Unfortunately, his suspicions haven’t kept his cat from becoming obsessed with the need to possess the beautiful female.

Chelsea is determined to atone for her youthful mistakes. Even if that means working with the aggravating Michel who refuses to believe she now wants to help the Pantera. Together they must overcome their mutual animosity to track down her former boss, Stanton Locke, before he can commit the ultimate betrayal.

STRIKER
Dark, damaged and definitely gorgeous, Striker is all about the mission. And when the mission’s over? The Hunter is out of there. That is, until one of Locke’s lab rats is forced on him—a beautiful, pained female who needs sex to survive.

The lovely Twelve was abducted and taken to the labs several years ago. Used for breeding, she was given drugs that make her irresistible to males. It was a hellish, lonely life. But she’s free now, and determined to discover the truth about her past. If only the road to that truth didn’t involve the heartless male she can’t stop herself from wanting.

All rights reserved. With the exception of quotes used in reviews, this book may not be reproduced or used in whole or in part by any means existing without written permission from the author.

Winter was no more than a crisp edge in the breeze that threaded its way through the Wildlands. Michel sucked in a deep breath of the fresh air, savoring the tingle of magic that flowed through his veins.

He loved this secret homeland of the Pantera. It was a place of beauty, power, and untamed dangers that lurked in the thick shadows. Not even the dozen new houses that were being constructed for the victims who’d been rescued from Locke’s dungeons of horror could mar the lush wetlands that were filled with a vibrant green.

This morning, however, his attention wasn’t on the cypress trees that dotted the thick bayous, or the nearby cubs who playfully wrestled on a patch of grass. Instead he watched the slender female who was perched on a fallen log, monitoring the playful cubs and occasionally making scratches on a clipboard she had balanced on her knees.

She was a striking beauty with her long curly red hair that blazed in the sunlight with a rich gold threaded through the strands. Her eyes were a pale green and her skin was soft and satiny, except for the scars that ran from her mid-cheek down to her throat.

The first time he’d seen her, he’d noticed the burn marks she tried to hide with her hair, but he’d instantly dismissed them. Instead, it was the rest of her satin skin that had captured and held his attention. A perfect cream that made his cat long to lick it until it was rosy with passion.

His intense arousal had set off all sorts of alarms in the back of his mind. Not to mention pissed him off.

This female had worked with Locke, kidnapping and torturing his people, along with innocent humans. And for all he knew, she was still working for the bastard.

It was obscene that his cat would instantly fall in lust with her.

And even more obscene he’d been unable to take another female to his bed since she’d arrived in the Wildlands nearly a month before.

He swallowed a growl as he sensed the approach of his leader.

Like him, Raphael was a Suit, but the two males couldn’t be more different. Raphael was tall, with a golden beauty and easy charm that made him the perfect Diplomat. Michel, on the other hand, was three inches shorter with broad shoulders and muscles that bulged beneath the New Orleans Saints sweatshirt and faded jeans he was wearing. His dark hair was skull-shaved and his eyes a dark green rimmed with black. His skin was naturally a deep copper tone, with a tattoo of a crouching puma inked on his chest.

He was also more aggressive than most Suits, which was why his brothers had been shocked when Raphael had made him a spy. But while Michel might not have a golden tongue, or the ability to mix among the humans, he could scale a building, disable the surveillance, and take out a dozen guards without breaking a sweat. Hell, he’d broken into the Oval Office just to prove he could.

“Should I ask why you spend so much time watching Dr. Young?” Raphael demanded, folding his arms over his chest as he studied Michel’s tight expression.

“I would think that was obvious,” he muttered.

A strange sensation tightened around Michel’s chest, his gaze never wavering from the female. She wasn’t lovely.

It wasn’t just the delicate features or the fiery hair. It was the intense intelligence that shimmered in her green eyes and the grim resolution etched on her face.

This female was a survivor.

His cat was dangerously fascinated. Thankfully, his brain was connected to his human side. Which meant he wasn’t going to be blinded by a pretty face and perfect tits.

“I don’t trust her,” he said, his voice hard as he watched her lean forward and lightly run a finger down the nearest cub’s back.

Over the past two weeks she’d requested the opportunity to do non-invasive research on the children who had been created in Locke’s laboratories. She’d promised that she only wanted to make sure that they were healthy and growing at a steady rate.

“Have you forgotten that she has given us information on our enemy that we would never have discovered without her?” Raphael demanded. “And that her skills have helped us heal our people?”

Did the annoying shit think Michel’s obsession with the female was funny?

“She’s shared just enough to earn a place in the Wildlands,” Michel snapped. “For all we know she’s a very clever spy who’s trying to lull us into complacency while she gathers intel to send to our enemies.”

“Because it’s what I would do,” Michel said between clenched teeth.

Michel made a sound of frustration. He didn’t understand why everyone else was so eager to forgive and forget when it came to Dr. Chelsea Young.

She was the enemy.

No matter what his cat might be trying to tell him.

“Besides, she’s had Pantera blood. She’s admitted that she’s developed heightened senses and she’s stronger than she was before her injections,” he pressed. “And there’s that little matter of her claim that she can ‘sense’ the Pantera. And even humans from a great distance.”

Raphael shrugged, not nearly as concerned as he should be. “I know, which is why I have her under constant surveillance.”

He nodded toward a large Hunter with short, tousled dark hair and eyes that were a vivid violet flecked with gold.

Far from comforted, Michel growled deep in his throat.

The young male had been lurking around Chelsea for weeks, his handsome features and easy charm easily working their magic on Dr. Young. Usually Michel found Rage’s ability to ensnare the opposite sex a source of amusement.

Now there was nothing funny about it.

Not one fucking thing.

“Rage is a talented Hunter, but he doesn’t understand the complex games that spies play,” Michel pointed out the obvious. “Not too mention he’s a perpetual flirt.”

Raphael cocked a brow. “Does that bother you?”

Michel refused to be goaded. He’d already revealed more than he wanted. “It leaves him open to manipulation.”

“Ah.” There was a hesitation before Raphael cleared his throat. “You know, Michel, I assumed you of all people would be sympathetic to Chelsea.”

His brows snapped together. “Why would I have sympathy for a woman who used our people as science experiments?”

“Because you know what it’s like to be different while you’re growing up, and the desperation to fit in.”

Michel’s breath caught in his throat, his cat crouching inside him as a remembered pain made him flinch. He rarely allowed himself to recall his early childhood when he’d been born with deformed legs. The twisted joints had been beyond the efforts of the Healers, and it hadn’t been until human technology had evolved far enough to operate on him that he’d at last been able to walk.

Yes. He understood the dark desperation of being flawed. And the fierce need to do whatever to gain command of your life. And why Chelsea’s eyes remained shadowed even when she smiled…

“It’s not at all the same,” he abruptly denied.

His fists clenched. “I didn’t sacrifice others for my cure.”

Raphael gave a dip of his head. “Fair enough.”

Michel turned so he was facing his companion. “When are you going to confess what’s going on, Raphael?”

The older male shrugged. “What makes you think something is going on?”

Michel gave a short laugh. “I can sense when you’re tap-dancing around because you have a piece of shit duty you’re about to dump on me.”

“About damned time,” Michel breathed. As much as he loved the Wildlands, he needed to get away and clear his head.

Plus he needed to be doing
something
. Anything.

“You might not be so eager when I explain your mission,” Raphael warned.

Michel gave a lift of his shoulders. “Anything is better than sitting on my ass waiting for—” He bit off his words, narrowing his gaze. “Wait. You don’t want me to babysit, do you?”

“Christ, you should be so lucky,” Raphael muttered. “I have an endless mob of females in front of my house just waiting to catch a glimpse of my precious daughter.” He shook his head, not quite capable of disguising his bone-deep pride. “I barely get to hold her unless I steal her from her crib and sneak out of the house.”

“Then what do you want?”

Raphael folded his arms over his chest. “Dr. Young gave us six locations where Stanton Locke might potentially be hiding.”

Ah. Now they were getting somewhere.

Our Dark Side by Roudinesco, Elisabeth
The Game of Stars and Comets by Andre Norton
A Habit of Dying by D J Wiseman
Nothing to Lose by Alex Flinn
The Winner's Crime by Marie Rutkoski
Calamity Jayne Goes to College by Kathleen Bacus
Children of the New World: Stories by Alexander Weinstein
A Home for Shimmer by Cathy Hopkins
Moscow Machination by Ian Maxwell
Mail Order Mistake by Kirsten Osbourne
Our partner