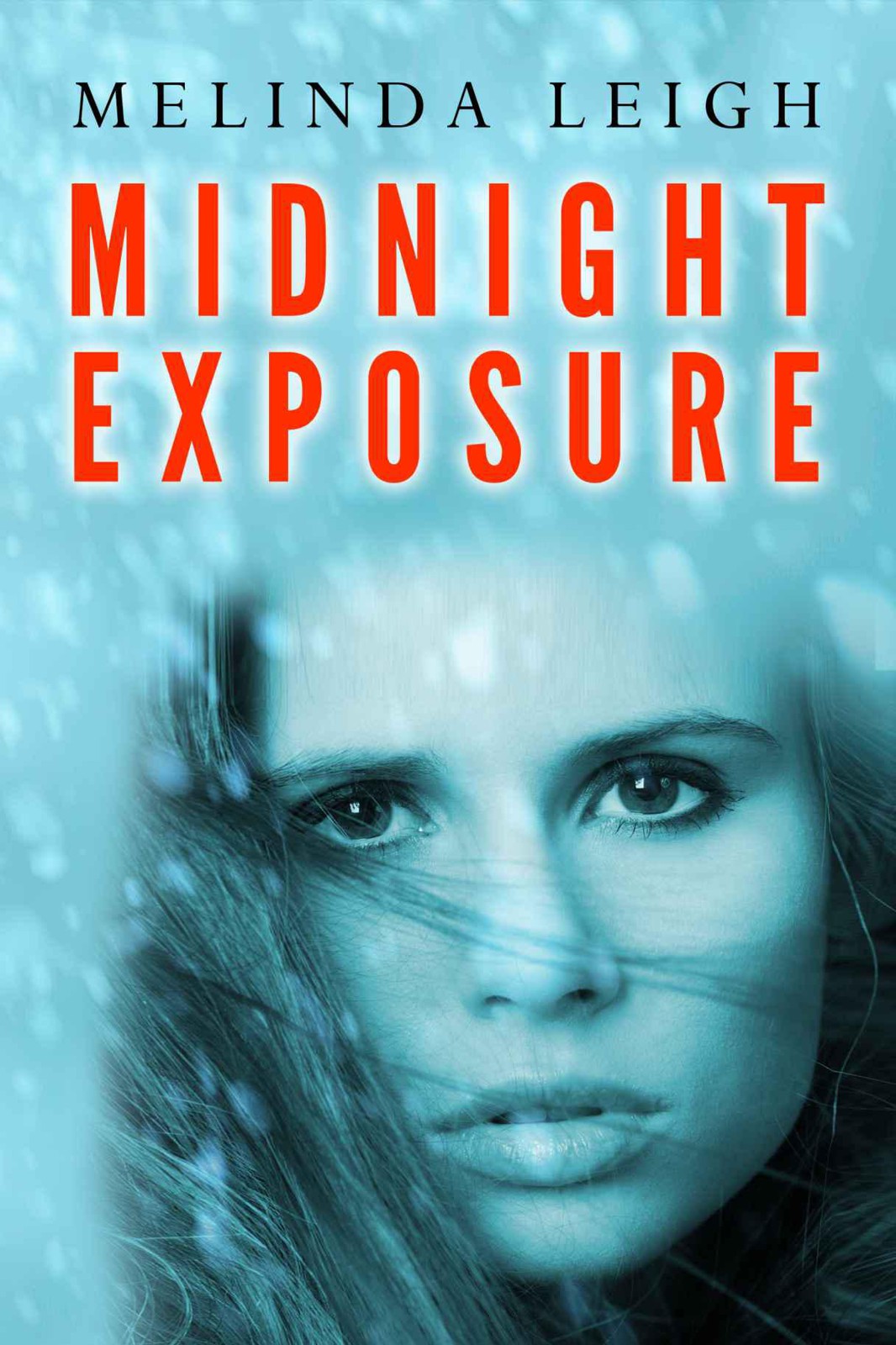 ALSO BY MELINDA LEIGH
SHE CAN RUN

This book is dedicated to my family.

To my husband and kids, for believing I could be a success long before I did; my mom, for wallpapering the state of New Jersey in bookmarks; my dad, for buying copies of my book for everyone he knows; my grandmother, for teaching me early in life that a good story begins with murder; and my grandfather, for
encouraging
the local librarians to stock my books.

Your support means more to me than I can possibly express.

“It’s OK.” John bit back the whine hovering on the tip of his tongue. Camping sucked. And being lost for two days in the middle of the Maine woods sucked even more. He sniffed. Frozen air stung his nostrils. Wood smoke cut through the heavy scent of pine. “I smell smoke.”

“Yeah, me too. Cool.” In front of him, his roommate, Zack, hefted his pack higher on his narrow shoulders. “Going in the right direction then.”

“I guess.” Doubt laced John’s voice. A scant half inch of snow dusted the game trail like powdered sugar. How had his roomie talked him into spending their fall break camping? “Long as it’s not a forest fire.”

“Not this time of year.” Zack shook his head. “Gotta be a campsite close by.”

John’s gaze swept the shadowed, desolate forest surrounding them. Bare tree limbs pointed to the overcast sky like skeletal fingers. “That’s what you said an hour ago. You sure you don’t want to stop here?”

Zack stopped and turned around. “Tell you what, city boy. If we don’t run into campers in the next half hour, we’ll pitch our tent and start a fire.”

“Man, it ain’t the cold that bothers me. Chicago isn’t exactly the tropics. It’s just so freakin’ quiet.”
And dark
. No streetlights, no headlights, no neon signs. John pulled his fleece hat lower over his ears and stamped his feet. Inside his boots, his toes stung.

Zack sucked in an audible breath and blew out a puff of steam. “It’s peaceful.”

“Creepy,” John corrected and sent a silent prayer skyward that his transfer application to the Art Institute of Chicago had been accepted. “Dude, I don’t blame you for losing the trail. Everything looks the same out here. But you’re crazy if you think this is fun.” John’s parents had thought he’d be safer attending college out here. Not. Didn’t they know Stephen King was from Maine?

The trail curved around an outcropping of boulders. An erratic, pulsing glow shimmered ahead as faint murmurs carried over the crackling of fire. Hope flared warm in John’s chest. “Do you hear that? It’s people!”

Instead of the expected greeting, the voices ceased, cut off suddenly like somebody’d pressed the Pause button. A shudder started at the base of John’s spine and quivered up to his nape. He stopped.

Zack moved ahead. “What the fuck?” His voice dropped to a puzzled whisper as he stepped through a patch of underbrush.

John pushed aside an evergreen bough. “What?”

The tree limb snapped back and John ducked under it. Straightening, he faced a clearing the size of a half basketball court. A circle of upright wooden posts, thick as telephone poles and tall as men, ringed the space. Five shorter poles formed a half-moon in the middle. In the center of their arc, next to a large
flat-topped stone, tall flames rose from a shallow pit. The tingle on the back of his neck surged into an electric charge. The wilderness might be foreign to him, but John recognized creepy shit when he saw it, and this whole place had a disturbing woo-woo feel.

John scanned the clearing.
Where are the people
? He’d heard voices. He knew it. Heat from the fire reached out to his frozen fingers, tempting him to step closer.

“Hello?” Zack called out again before John could stop him.

This place was giving off nasty vibes. Zack was the expert on trees and animals and crap, but the street smarts that had saved John’s ass from those gangbangers last spring wanted him to beat feet.

John’s gaze dropped to the ground. Just inside the ring of posts, a dark line cut through the thin glaze of frost, as if someone had poured liquid in a giant circle, marking it for something.

John reached for Zack’s arm to pull him back into the trees, but Zack was already moving forward.

“What are you doing here?” A man stepped out from behind one of the posts. Silhouetted, with the fire to his back, he was featureless.

John’s arm dropped to his side. Firelight gleamed off a dark hooded robe that draped the stranger’s frame and pooled on the ground around his feet. John’s weirdo-meter went ape shit.

The man took three steps. The expansive hood obscured his face like the Emperor’s from
Star Wars
. He was close enough to touch Zack now. “You crossed the line.”

John knew he should step forward with his friend, but his legs wouldn’t budge. His feet refused to cross into the circle. There was something critical about that line. John could sense it.

The robed man shifted. A blade flashed silver in the moonlight, flicked at the white skin of Zack’s neck. A gurgling gasp issued from his lips. Shock choked John like a hand clamped around his neck. His friend’s body crumpled to the frozen earth. Zack’s head hit last, bouncing twice on the frozen ground. One final breath clouded the night air as dark liquid gushed from the wound onto the frost in a wet streak, like the first brushstroke on a blank, white canvas.

Steam rose from the pooling blood in a lazy swirl. Staring, numb with nightmarish disbelief, John’s empty stomach turned. He blinked and ripped his gaze from his dead friend to the shadowed figure. The man’s head swiveled toward him. One hand clenched the knife by his thigh. A thick drop of Zack’s blood dripped from the point and stained the snow next to the man’s boot.

Horror paralyzed John’s brain, but primitive instinct guided his feet. He turned away from the warmth of the fire, away from the man he’d thought was going to save them, and fled toward the darkness of the surrounding forest in a dead and panicked run. The rubber treads on his boots slipped on the slick ground. He crashed through a curtain of pine boughs. His gaze darted ahead. Which way? He paused and listened, disoriented by the monotony of the landscape. Footsteps rustled through the underbrush behind him, unhurried, as if his pursuer had no reason to rush.

John stumbled away from the sound. His legs pumped awkwardly, like pistons in need of lubrication. Branches whipped his face. Pine needles sliced his frostbitten cheeks like razors. He ducked behind the wide trunk of a towering tree and clamped a
shaking hand over his mouth to quiet his breaths. His panting echoed over the rush of blood in his ears, the sound of futility.

The man was going to hear him.

He was going to find him.

He was going to hunt him down and kill him as if he were a well-fleshed buck.

Branches creaked over his head as the wind blew powder from the tree’s limbs. The crisp night air closed in on him, caressed his sweat-coated skin. A hollow at the tree’s base tempted him to curl up and hide like an exhausted rabbit.

A twig snapped to his left. He pushed away from the tree trunk and staggered forward—into a solid, robed chest. John bounced backward and lost his footing. A hand snagged the front of his coat, righting him, hauling him closer, up onto his toes. John’s heart plummeted as he raised his gaze. Icy blue eyes stared back at him from the narrow slit of a black balaclava.

A huge fist slammed into John’s temple. Pain exploded behind his eyes. His senses faded.

That’s it, then. At least it can’t get any worse than this.

But as blackness closed in on him, his last thought was that he could be wrong.

“You have arrived at your destination,” the smooth, feminine voice of the GPS announced.

Jayne eased off the gas and squinted through her windshield at a whole lot of nothing. She glanced down at the palm-sized screen Velcro’d to her dashboard. Number twenty-seven, Route Six was supposed to be right in front of her. But on both sides of the two-lane road, a thin veneer of snow glazed an endless forest. No driveway. No mailbox. No sign of civilization.

Now what? The pale dusk of an overcast sky bleached the landscape, as stark and lonely as an Ansel Adams black-and-white. As much as Jayne appreciated the aesthetic beauty of the wilderness around her, she did not want to still be appreciating it in the dark, especially with her gas gauge nosing into the red.

Wait. What was that?

She guided the Jeep onto the shoulder in front of a narrow opening in the woods. Cleverly tucked behind a stand of pines, a black wrought-iron gate blocked the entrance. In the center of some simple scrollwork, right under the Private sign, was the number
27
in gold script. A narrow lane curved away from the gate. Beyond the bend, the corner of a house peered through the winter-bare branches. Cedar and glass. Modernish.