She got dressed and followed them all night as they finished their pillaging and moved back into the woods where she could only keep up with them briefly before losing them in the dense undergrowth but not before they stopped for awhile and watched her and she saw in their eyes the thing that took away the fear.

For a flash second Ann didn’t know where she was. Her kayak wobbled as she found her balance again. She looked around and was surprised to see how far she’d drifted down the bay. On a small sliver of a beach Tammy lay on her back, her blue kayak drying next to her.

Ann dipped her paddles and headed for shore.

James sat on his bed and cleaned the .38. It was dark out already and he could hear insects outside.

He kept inside the motel during the days. He’d seen the Twin Falls police come by a few times to break up some loud parties but they’d never bothered him. Yet he got the sense that he should think about moving on. He couldn’t escape the feeling that he was being watched.

And then one night while he’d gone out to buy some groceries someone had broken into his room. They hadn’t found the money he’d stashed but they did go through some stuff that would tell them who he was and where he was from and if they wanted to look further they’d find out what he’d done and then make big trouble for him some day.

He left the gun on the bed and went to check on the courtyard. He could see people out in the dark smoking and drinking. It was a warm night and he could hear some kids being told that the pool was going to close in ten minutes. Since the air conditioning didn’t work he left the window open just a crack. It would be impossible to sleep during the night. He usually couldn’t until after he heard the morning cars leave.

When James lay back on the bed he listened to the sounds around him. The couple next door had finally quieted down and the woman had left afterwards and the man was now on the phone talking. Someone had tried his door until they realized their mistake. They hadn’t known that he was standing behind it with his gun ready. When they went away he lay back down again.

Sleep was never a pleasurable thing to James like it was to some people. But when he started to drift off he thought he heard the sound of Shoshone Falls and after a while he imagined the ocean again and wondered how long it would hold him in its grasp.

He heard the train come by. But this time it stopped, and he imagined with it the cargo of his nightmares. 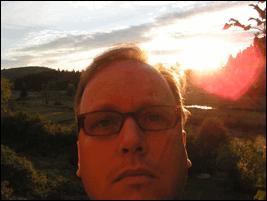 Dennis Yates (born 1963) is an American writer of novels and short stories. He is a native of Portland Oregon, and a fan of long road trips. He often dreams of the red canyons of the Southwest.