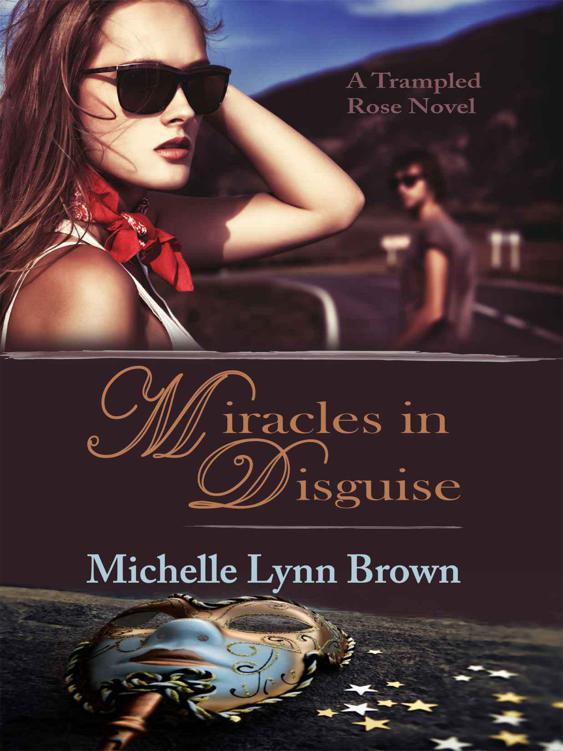 Miracles in Disguise - Book One in the Trampled Rose Series

No part of this publication may be reproduced in any form, stored in any retrieval system, posted on any website, or transmitted in any form without written permission from the publisher, except for brief quotations in printed reviews and articles.

This book is a work of fiction. Names, characters, places, and incidents are the product of the author’s imagination and are used fictitiously. Any resemblance to locations, actual events, or persons, either living or dead, is coincidental.

This book is dedicated to…

My Savior -
Without you, my life would be empty and meaningless. I pray that every book I write, everything I do, and every breath I take brings You glory and honor.

My husband and kids -
Thank you for encouraging me, loving me and supporting me through the process. For saying “Go” when I wanted to stop; for saying “You can do it” when I thought I’d never make it; and for telling me “I told you so!” when it was complete. Thank you for calling me an author before I was ever published!

My Mom -
Thank you for all of those Saturday trips to the book stores. Because of you, I fell in love with the magic of the written word.

Kristina heard the rattle of keys in the door and hurried to put the last of the dinner on the table. She rotated the meat platter just a hair, tucked the oven mitt in the drawer, smoothed a non-existent wrinkle from her dress, and went to greet her husband.

She plastered a warm smile on her face and met David just as he walked in the door. His steel-gray eyes pierced her, tracking her slightest movement as she came toward him.

“How was your day, darling?” She leaned up on her toes to kiss him. After five years of marriage, she had become an excellent actress.

Her stomach flipped-flopped as he pulled off the jacket of his suit, not saying a word. She could tell it had been a long day; irritation was etched into the lines on his handsome face. He tossed his suit coat on the back of the couch, and stared down at her with his penetrating stare that never failed to engulf her in fear.

The tension left her body as he pulled her close, tucking her head under his chin and wrapping his arms around her. “My sweet angel,” Kristina felt his words against her hair, “You are the perfect medicine on days like this.”

David pulled away just enough to gaze down at her, and Kristina remembered when words like these had sounded sweet to her hungry heart. Tears stung the back of her eyes, and she tried to avert them so he couldn’t see.

But it didn’t work.

“Tears?” His questions were always laced with a threat.

Tucking her emotions firmly away, she twined her arms around his neck. “After all these years, your love still brings tears to my eyes. I am so blessed.”

Or cursed!
The thought scurried across her mind, but she wrestled it down. David could read her so easily.

There was a hint of skepticism in his eyes, but he said, “You are my miracle, sent down from Heaven when I needed you most. Don’t ever forget that.”

Those words used to thrill her, but the days of longing for the charming, loving and romantic husband of her past were gone. Now she knew the truth; he never existed. Those words were spoken to remind her of her place.

David took her hand and led her to the dining room. “Beautiful dinner, as always.” He reached out and turned the meat platter a hair, looking across the table with a raised eyebrow.

After he prayed over the meal, he asked, “Did you tell Lisa that you wouldn’t be returning this year?”

“Yes,” she hoped he didn't notice her hesitation. No matter how vigilant she was, he could still trip her up with a well-timed question or a cold, piercing stare.

“You hesitated; is that because you’re lying, or because you have reservations about being obedient to your husband?”

Get into it, Kristina!

She focused on cutting her meat, but she could see that his hands had stilled over his plate. After a moment’s pause, he threatened, “I hope so. My sweet angel needs to remember who God sent her to."

“I
loved
teaching,” she stressed the past tense of the word, hoping this would ease his mounting anger. “Naturally, I am going to miss my students. But not teaching this year will allow us to have our own children.” She searched for something to get him off this track, “I was thinking I could homeschool our children. What do you think?"

“I’ll think the matter over,” he said as he pushed away from the table. Coming to stand behind her, he bent down and brushed his lips on the side of her neck. "But first we must conceive these children.”

It took every ounce of control not to shudder as he ran his hands lightly down her arms, “Come with me, my sweet angel.”

Get into it, Kristina! Just three weeks!

Excitement mixed with anxiety churned in the pit of Kristina Talbot’s stomach. Each mile marker she passed seemed to whisper a steady chant of, “Freedom…freedom…” causing her foot to press harder on the accelerator.

She had traveled over two thousand miles across the country to New Mexico, and the trip wasn’t without incident. She had lost count of the times she’d missed her exit, and if the GPS chimed in with “recalculating” one more time, it was going to take a trip of its own - out the window!

Back in Texas, on what should have been her last day of travel, she stopped to eat lunch at a charming little Mexican restaurant. The salsa looked innocent enough, and the tomato-onion concoction that she sprinkled liberally on her fajitas seemed like a delicious idea at the time. But they left her mouth on fire and her stomach in agony. Her little peccadillo with the Pico de Gallo cost a day and a half’s worth of travel.

This morning, she had felt better and was eager to get to New Mexico. Now, within a few miles of her final destination, she felt tired - but extremely relieved.

Just then, the car died. No sputtering, no chugging, not even a last ditch effort rumble from the engine – it just died without warning. Kristina gaped at the dashboard, looking for a warning light to signal the reason.

She let the car glide to the side of the road and got out. After propping the hood, she gazed at the contents. David always traveled with a well-prepared trunk, but she knew it only contained her luggage now. Besides, she thought, even with a trunk full of tools, she wouldn’t have known what to do with them.

“
That’s okay; that’s why you have me.
” The memory of her husband’s long ago comment and his usual recriminations surfaced, causing tears to sting the back of her eyes.

Lifting her chin in defiance, she countered the whispered memory, “No, that’s why I have a cell phone.” She flipped open her phone, but then grumbled. “But apparently it won’t be any help.” Defeated thoughts raced across her mind,
No idea of how to fix the car, no signal on my phone, and no clue as to what I’m going to do next. Some fresh start!

An image of David, fierce and formidable, flitted across her mind.
“You’d be lost without me…”
She fought the wave of criticism and doubt that threatened to burst through the doors of her heart.

She walked to the side of the car and leaned against it,
No! I refuse to get upset, I’ll just let the car rest…maybe I’ll be able to make it to Hamilton then.

In attempt to divert her destructive thoughts from resurfacing, she looked out in the distance. The mountains were a myriad of colors, from mauve to brown with a small freckling of greenery. The sky was such a perfect blue, except for the distant storm cloud that hovered over the mountain peak. Kristina wondered, as she gazed across the landscape of cracked dirt and dry brush, if the much-needed rain ever made it to the ground, or if it just evaporated in the intense heat.

So different from New York, she thought. When she left, the temperatures were already dropping, and the leaves were starting to change colors. In her hometown, the lush green mountains provided a perfect backdrop for the trees’ vibrant colors. But the desert was now going to be her home, and as she gazed out at the treeless horizon, changing leaves didn’t appear to be in her future any time soon.

After closing the hood, she got behind the wheel. Hoping for the best, she said another prayer for God to send her a miracle. She turned the key, but the engine remained silent.

“Remind me to look up the definition of miracle, God, because I must not have the right one!”

The hum of an engine, and the crunch of tires on gravel, interrupted her thoughts. Looking in her rear-view mirror, she saw an old pick-up truck rumble to a stop behind her. “Great,” Kristina riffled through her purse for her pepper spray, “Now I have to fend off serial killers.”

She watched as a tall man in faded jeans and a dark green polo shirt sauntered up to her car, his boots leaving a trail of dust in his wake. Kristina rolled her eyes when she heard the man whistle. “New York!”

Reaching her door, the man bent down and peered in the window with a charming smile. His steel-blue eyes flickered to the pepper spray, and to her mortification, he seemed to find it all amusing.

She cracked her window a fraction of an inch, “Yes, I’m doing fine. Thank you.”

Again, his blue eyes darted from the sliver of open space in the window, to her pepper spray, and back to her frightened face. “I can see that.” Though he said it under his breath, Kristina still heard his comment. He continued despite her glare. “I meant are you having car trouble?”

Kristina bit back the retort that was ready to spring from her lips at his sarcastic comment. But she remembered she was stranded in the middle of nowhere.

“My car just . . .” she paused as he reached into his back pocket. Her heart leapt a mile a minute, and her imagination wasn’t far behind as it somersaulted into the notion that he was pulling out a weapon to do unspeakable things to her. She fumbled with the spray, nearly dropping it. When she recovered, she aimed it at him.

Little Brats: Olivia: Forbidden Taboo Erotica by Selena Kitt
What is Love? by Saks, Tessa
Alice Isn't Well (Death Herself Book 1) by Amy Cross
The Cocoa Conspiracy by Penrose, Andrea
DAC 3 Precious Dragon by Liz Williams
Your Mother Was a Neanderthal by Jon Scieszka
The Inheritance (The Donatelli Series) by Sue Fineman
Drew + Fable Forever: A One Week Girlfriend Novella by Murphy, Monica
The Juniper Tree by Barbara Comyns
A Medal for Leroy by Michael Morpurgo
Our partner