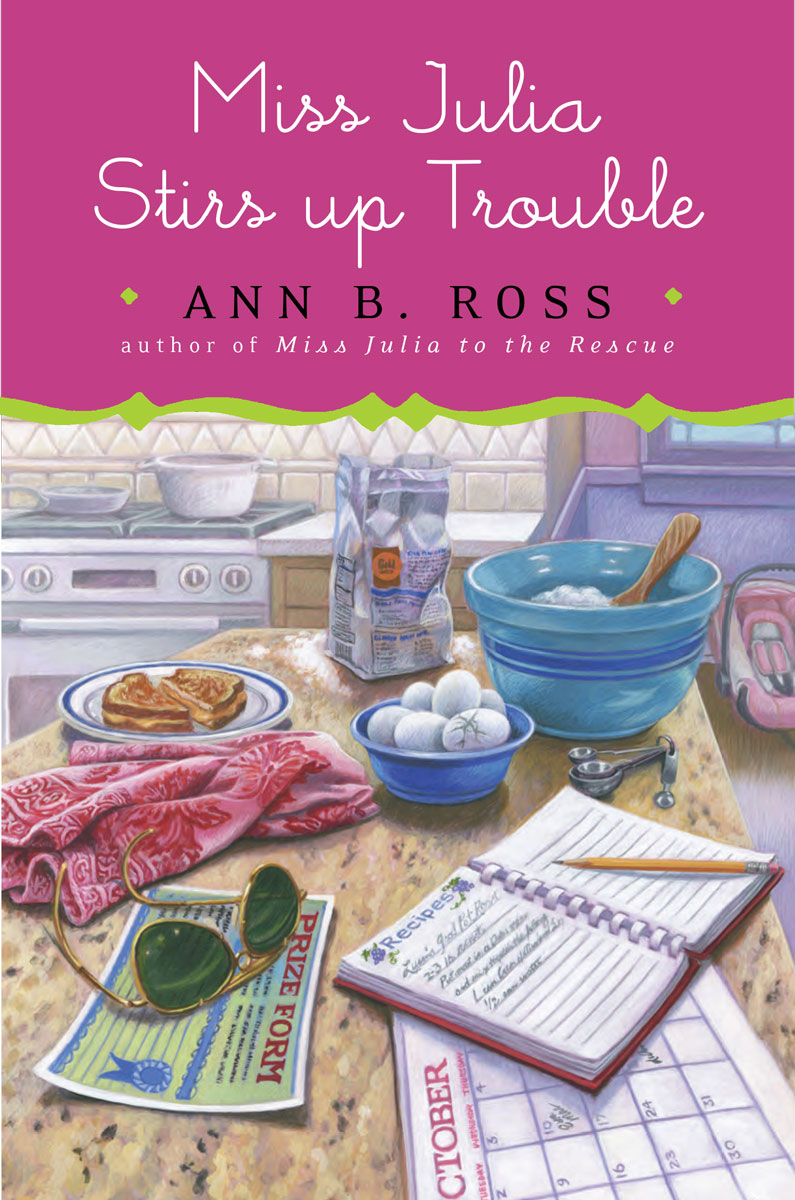 Also by Ann B. Ross

Miss Julia to the Rescue 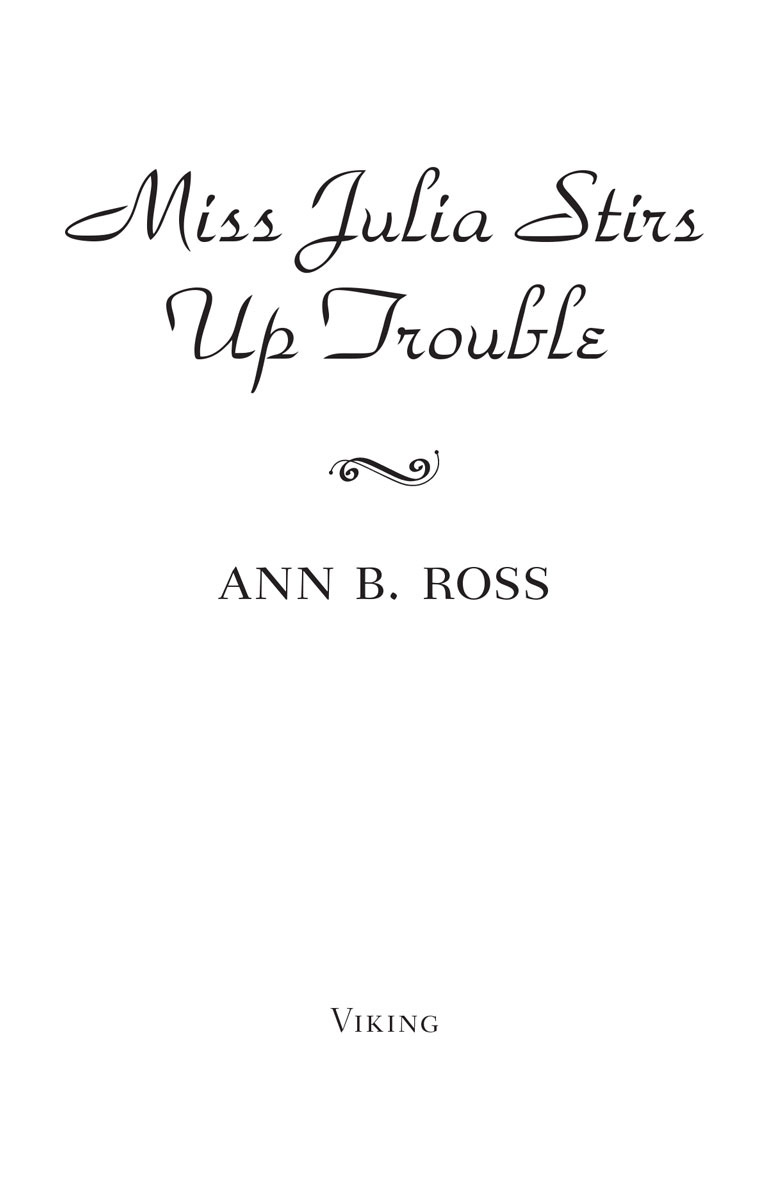 This book is for Pamela Brown Silvers and for Patricia Toner, computer experts extraordinaire. Each of them has, at various times and for various reasons (mostly because of errors on my part), rescued me from the clutches of my wayward computer: For Pat who has the patience of Job and for Pam who always has the answers. Thank you.

Also by Ann B. Ross

The recipes collected by Miss Julia for Hazel Marie’s edification can be found within the text. Lillian’s recipes for side dishes and the like are listed at the end. A complete list of the recipes with page numbers is in the back of the book. Enjoy!

Stepping carefully onto the newly sodded patches of grass at the side of the house, I stood by a hydrangea bush for a few minutes, admiring the graceful lines of my new Williamsburg chimney. Reassured that it was worth what it had cost to have it, I strolled across the lawn to the arbor near the back fence. After brushing dried leaves from the bench, I sat down to revel in the glorious October day. I marveled at the clear, blue sky—Carolina blue, as Lloyd called it—and the molten gold leaves of the gingko tree on the edge of Mildred’s lawn next door. A light breeze ruffled through the almost leafless wisteria vine overhead, as a feeling of peace and gratitude for our blessings filled my soul. All the carpenters, painters, paperhangers, plumbers, and brick masons were long gone, leaving us with a remodeled and redecorated house. Well, not the whole house, but three rooms had been remodeled and redecorated. Even better, extra furnishings, like the bedroom rug, which had been rolled into a stumbling block in the hall, were out of the house and the mattress was off the dining room table and back on our bed where it belonged. My house had been returned to its ordered self, and at least for these few minutes, all seemed right with the world.

Sam, my darling husband—acquired late in life, but all the more precious because of it—was home from his travels, working now in his new office in the old sunroom upstairs and loving it. “The best and most efficient office I’ve ever had, Julia,” he’d told me, but I think that was because I’d had the foresight to put in the semblance of a tiny kitchen in a closet—a coffeepot and an under-the-counter refrigerator so he didn’t have to tromp downstairs every time he wanted something to drink. The hall bathroom was right next door, too.

And Lloyd. My heart lifted as I thought of the boy foisted on me by my deceased first husband by way of a long-term adulterous situation, the boy who had become the center of my life. In spite of the fact that his mother was now well and truly married to Mr. Pickens—an event I’d almost despaired of ever happening—Lloyd didn’t seem eager to leave my house for theirs. He was still in and out, spending the school week with Sam and me and most weekends with his mother and Mr. Pickens four blocks away in Sam’s old house. I worried a little that the odd arrangement would warp his character but, on the other hand, having two homes with two helpings of being loved and wanted couldn’t be harmful. Both apprehensive and excited, he’d started his first year of high school and now, after a couple of months, he was finding that a quick intelligence and a sunny disposition were making a place for him. I couldn’t help but notice that he was still smaller and, in spite of his usual serious demeanor, younger-seeming than his classmates, many of whom were on the verge of manhood with their husky physiques and voices. And, actually, he
was
younger, for Hazel Marie had let him skip a grade before they came to live with me. Yet I had no worries about Lloyd fitting in. He was making new friends and meeting the new challenges set by his teachers. He was the joy of my life and, as I thought of him, I knew that at least for this moment in time, all was right with him and with the world.

Hazel Marie had her challenges as well, and to my constant amazement, considering the fact that she’d had such a disreputable background to overcome, she was meeting them head on. Who would have ever thought that the overpainted woman who’d flounced up to my door, bastard son by her side, announcing to me and the world what Wesley Lloyd Springer had been doing before he passed over, would turn out to be a sweet and valued friend, as well as an accepted member of Abbotsville society, such as it was? Those twin baby girls—born, I am happy to say, firmly within wedlock—took almost all her time, but she would have it no other way. I had made the mistake of suggesting within Latisha’s hearing that she employ a nanny or, at least, an au pair to give her a rest from the constant demands. Hazel Marie rejected the suggestion—she couldn’t turn her babies over to anyone else—but Latisha decided that when she grew up she wanted to be either an au pair, once she learned what an au pair was, or a rock star. Lillian just rolled her eyes at her little great-grand.

Mr. J. D. Pickens, an erstwhile rambling man, seemed as contented as I’d ever known him to be, or as a freelance private investigator can be. I’d fretted a little about Hazel Marie’s devotion to those babies, fearful that he’d feel left out, which I understand can occur when a wife is too busy or too tired to address her marital duties. When I carefully broached the subject to Hazel Marie, she assured me that Mr. Pickens lacked nothing in that department, and from what I can tell by the smug look on his face, she wasn’t wrong. James, who’d looked after Sam for years before our marriage disrupted their cozy nest, is still with the Pickens family and, though he and I have a prickly relationship, I’m grateful that their kitchen is in good hands, which means that no one is going hungry. James rarely turns his hands in the rest of the house, but with playpens and toys and strollers and high chairs strewn everywhere, there’s not much he can do in the way of keeping a neat house.

I leaned my head back against the bench, thinking with deep pleasure about my loved ones, safe and thriving and prospering—all was, indeed, right with my world.

“Miss Julia!”
I looked up to see Lillian waving a dishrag at me from the back stoop.
“Miss Hazel Marie wants you!”

I came to my feet and hurried to the house. It wasn’t like Lillian to yell across the yard, so one drastic image after another flashed through my mind.

“What is it?” I gasped, my heart pounding by the time I reached her. “Is it Lloyd? The babies?”

“Neither one,” Lillian said, her eyes big. “They jus’ take James to the hospital.”

“Oh, my word.” I flew to the telephone and picked it up. “Hazel Marie? What happened?”

“He fell, Miss Julia!” Hazel Marie’s voice was filled with panic. “Down the stairs on the side of the garage, you know, coming down from his apartment. I was so scared I didn’t know what to do, but thank goodness J.D. was here. He called the EMTs, and he just called me from the emergency room. James’s right wrist or hand or something is broken so he has to have a cast. And he sprained his ankle, too, but they just wrapped it up.” She stopped and took a deep breath with a catch of fear beneath it. “I thought he’d killed himself.”

“J.D.’s bringing him home, so I guess so. I’m putting him in the back bedroom because he can’t go up and down the stairs anytime soon, and I’ll feel better having him close by. He can’t even walk by himself, Miss Julia.”

“Oh, my. But they’ll give him some crutches, won’t they?”

“J.D. said he can’t use them because the cast practically covers his hand. Oh, the poor thing—we’re all so upset over it.”

They were going to be upset over more than that, I thought, when Hazel Marie, the world’s most inept cook, had to take James’s place in the kitchen.

It just goes to show that when you have a few minutes to glory in everything being right with the world, you’d better enjoy them while you can. It’s never long before something comes along to turn your world inside out and upside down again.

“We better take supper to ’em,” Lillian said, opening the freezer door. “Sound like nobody fit to do any cookin’ over there, so good thing I got enough pork chops to go ’round.”

“Yes, thank you, Lillian. I’ll run up and tell Sam about James.”

“He already know,” Lillian said, just as I heard Sam’s footsteps on the stairs. “He pick up the phone same time I did.”

I went to meet him in the hall, knowing that he’d be concerned. James had been with Sam for years before we married and Sam thought the world of him, even though James got a little more averse to work every year that passed. Still, they’d gotten along well until Sam had brought me into the mix. There was no way in the world I would’ve put up with James’s languid attitude toward getting things done. I’d once heard him tell Lillian that he enjoyed work, so much so that he could sit and look at it all day long. So it had been arranged for James to stay with the Pickens family when they took up residence in Sam’s house. I didn’t want him underfoot at my house and James didn’t want me pointing out work to him.

“Hazel Marie said they’re bringing him home,” I said as I met Sam at the foot of the stairs, “so he must not be too bad off. Are you going over?”

“Yes, I better see about him. I’ll tell you the truth, Julia—James is not an easy patient. The year he had the flu—a really bad case of it, too—I was up and down the stairs all day and half the night taking care of him.” Sam smiled as he remembered. “I made the mistake of rigging up a bell that would ring in the house when he needed something. They’re going to have their hands full with him.”

“I doubt Mr. Pickens will be as compliant as you, and I expect James will find that out soon enough. Anyway, tell Hazel Marie that we’re bringing supper so she doesn’t have to worry about that.” I walked to the door with Sam. “How long do you think he’ll be in a cast?”

“I don’t know. Five or six weeks, maybe, depending on how severe the break is.”

Good Lord, I thought. In five or six weeks the Pickens family would be either poisoned from Hazel Marie’s cooking or starved half to death.