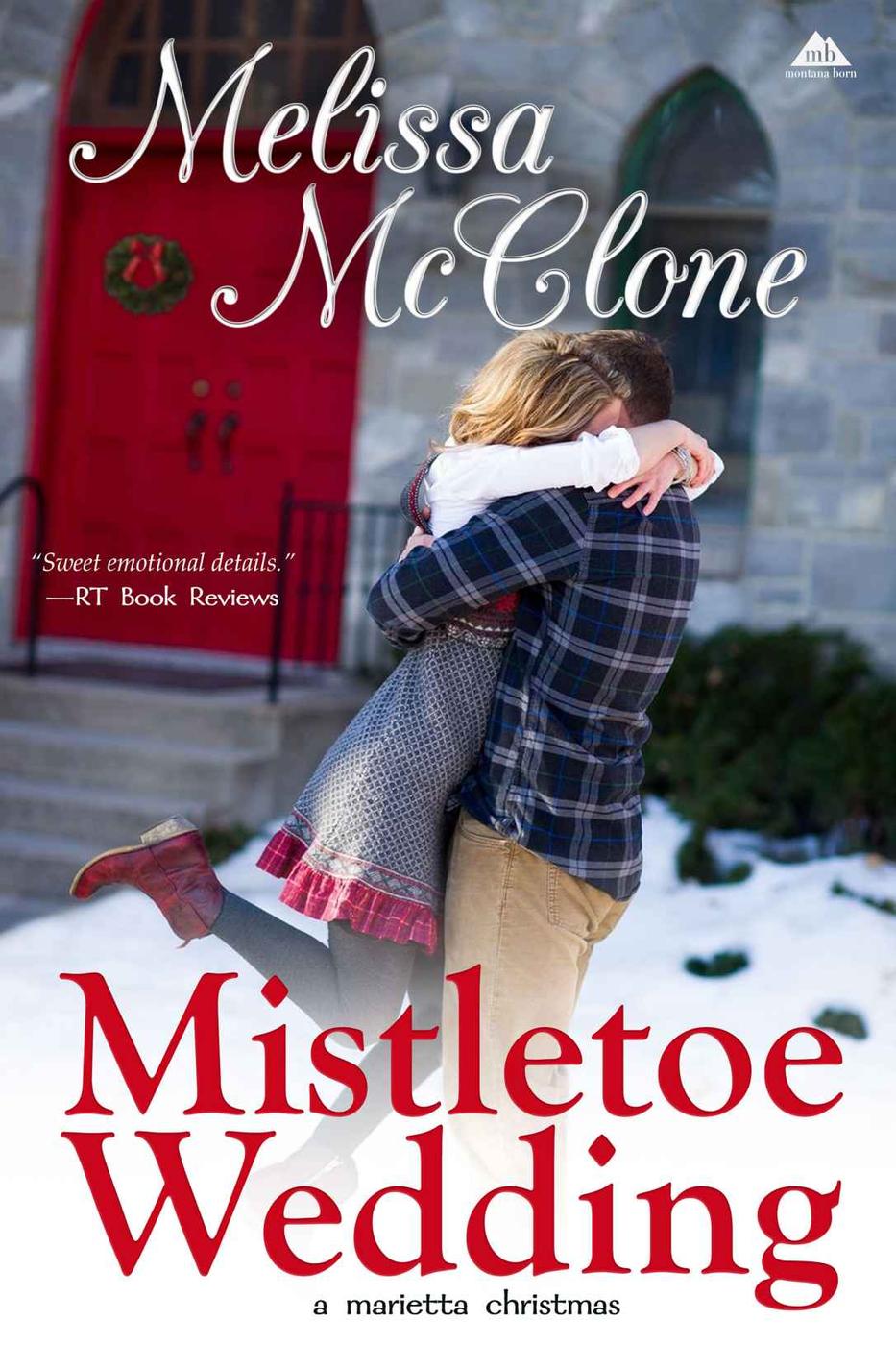 Thanks for supporting my dreams.

T
yler Murphy’s countdown to Christmas began on December twenty-sixth after spending his first and best holiday ever at the Bar V5 dude ranch in Montana. Spring, summer, autumn . . . each passing month brought him closer to winter.

He relished the first snowfall, didn’t mind breaking through ice so his cattle could drink and bundled up when the temperature dropped below freezing. On the day before Thanksgiving, Ty and the other wranglers brought out plastic bins filled with the ranch’s supply of decorations, including lights and a worn-only-once Santa suit.

Ty woke before his alarm on the morning of Black Friday. This was the day Christmas decorations went up, the start of the holiday season at the Bar V5.

Outside, snow flurries fell from the sky. He placed his gloved hands in his pockets on the walk to the barn. The tiny flakes disappeared as they touched his jacket. Perfect weather for stringing lights and hanging garland.

The cold air nipped at his face, but the temperature was more refreshing than uncomfortable. Winter weather didn’t bother him. Coming from Phoenix, he’d realized there could be such a thing as too much sun. You got used to the cold and learned to adapt and make the most of what God gave you.

This morning that was a scruff of whiskers. Nate Vaughn—Ty’s business partner, best friend and brother-in-law—preferred a clean-shaven, no-beard crew around the guests, but today Ty had showered and skipped shaving. That was as close to a day off as he’d get this Thanksgiving weekend.

He didn’t mind. Work at the Bar V5 felt more like a vacation, because he loved what he did. Hard to believe he’d gone from ranch hand to Nate’s co-owner. Dreams did come true. At least his had. His sister Rachel moving to the Bar V5 and opening a bakery in Marietta, the closest town to the ranch, was the proverbial icing—buttercream, his favorite—on the cake. With December three days away, things would only get better.

Ty couldn’t wait to open the first door on his Advent calendar and eat the piece of chocolate inside, something he’d done since he was a kid. Chances of topping Rachel’s engagement on Christmas morning last year were slim, but he was hopeful they’d have a wonderful holiday season, given the Bar V5 would not only have overnight guests, but also host a wedding. A busy month ahead during what was normally a get-the-work-done-then-relax time at the ranch.

Twinkling white lights strung around the barn door glowed in the early morning light. The Christmas card worthy sight warmed his insides better than a cup of steaming coffee. Someone must have stayed up late to decorate. Ty didn’t know whom, but he appreciated the effort. The only thing missing was a wreath. Most doors around the Bar V5 would have one, or a pine swag, by mid-December. A few might have a wreath hanging later today.

Music played from inside the barn, a rousing version of “Sleigh Ride.” Thank goodness for the distance to the lodge, cabins and bunkhouses or the volume would wake people.

Someone had too much holiday spirit this early in the morning. The wranglers had been awake in the bunkhouse, smiling, not hungover, so a late night drinking at Grey’s Saloon or the Wolf’s Den in town wasn’t to blame for the racket, but Ty knew one thing. The barn cats and horses weren’t going to be happy with the noise. Best to turn down the volume right away.

The song, he realized a second later, but his tight muscles didn’t relax. Not when disbelief and confusion twisted his insides like one of Rachel’s braided bread loaves.

Strands of lights had been strung around each doorway and rafter. Sparkly stars and shimmering snowflakes hung from what looked like fishing string. Talk about a wasted effort. The glitzy decorations made the barn seem more like a shopping mall than the oldest building at the ranch.

He’d seen barns decorated for weddings, dinners, dances, and other events. Sure, they looked nice, elegant in some cases, but this . . .

Ty scratched his chin. He wasn’t sure what
this
was supposed to be, given the place was for animals and ranch business, not where they would be holding the wedding reception or entertaining guests. A wrangler never would have decorated the barn to look so . . . glittery. The lights, sure. The ranch was decked out in lights every year, but the rest?

He looked around until his gaze found a Christmas tree that hadn’t been there when he’d gone to bed. Miniature white lights glowed against the green branches. A gold star sat on top. Two frisky felines—one was Onyx, a sweet, black cat who believed the litter box to be his kryptonite, so he lived in the barn—knocked off metallic bells and shiny colorful ball ornaments. The balls didn’t fair so well against the dirt floor. Glass shards littered the space around the bottom of the tree.

Damn. A cat could cut a paw or get glass stuck on them. He’d better clean up the mess before more wanted to climb the tree. Ty covered the broken glass with a tarp, grabbed the Shop-Vac® from the storage closet, vacuumed up the mess, then removed the balls from the branches to keep more from breaking.

Dogs barking “Jingle Bells” played from the strategically placed speakers. The volume seemed loud outside, but bordered on the obnoxious level in here. Someone must be wearing earplugs or be hard of hearing. Ty looked for an off switch or volume control on the speakers. He couldn’t find either.

Great. He hoped his office door muted the sound until he figured out a way to turn off the noise without shutting off the electricity in the barn. The cats didn’t seem to mind much, but the loud music and bright lights would get old fast.

A bag of coal settled at the bottom of his stomach.

Talk about an over-the-top, Christmas-gone-wrong nightmare. Whoever did this had missed the memo about less was more when decorating. Ty scuffed the ball of his boot across the dirt floor. This was not how he wanted to start the day. At least he knew the first thing to write on his chore list today—redecorating.

“What do you think?” a female voice asked, her tone hopeful.

A-ha. He knew who was to blame for making a Las-Vegas-strip-worthy spectacle of
his
barn. Meg Redstone, the newest addition to the Bar V5 staff, in charge of guest services and event planning, a Montana native who’d spent the past five years working at hotels and inns in the Midwest. Nate must have added holiday decorator to her job description. This looked like something a city girl might do.

Ty would be careful with what he said. The last thing he wanted to do was upset a new employee. He faced the full-size elf, not surprised she wore a reindeer antler headband over her fleece hat.

Her gaze met his. The hope he’d heard in Meg’s voice matched the expression in her milk chocolate eyes.

His heart lurched. Not the reaction he expected or wanted, but she looked . . . good.

She wore a forest green parka with a Bar V5 emblem on the upper left side, insulated pants, gloves and boots. Dark blond strands of hair stuck out from her hat. Only the skin on her face was exposed. The cold temperature tinged her cheeks and nose pink. Pretty, if you liked soulful brown eyes and a generous mouth. He did.

She smiled tentatively, as if on display and awaiting approval. Not her, the decorations. “Good morning.”

“Hey.” He would be interested in getting to know her outside of work, except for one thing. A six-year-old girl named Brooklyn who was Meg’s daughter. A nice kid, but moms were to be avoided at all costs. Hell, women who wanted kids, too. Non-negotiable. “Up early.”

He looked around, not seeing anything specific except for a blur of colored lights. “You’ve been, uh, busy.”

She bounced from foot to foot, moving her hands. Excited or too much caffeine? He’d go with the first.

“I started as soon as Thanksgiving dinner finished.” Meg patted her stomach. “A good thing, because after your sister’s amazing meal, I needed to work off calories. And I wanted to surprise you.” She raised her gloved hands. “Surprise!”

So what if Meg was attractive? Or she fit in with the staff as if she’d worked at the Bar V5 for years, not weeks? Three to be exact. She had a kid. A cute one, but a child in need of a father.

Not going to happen.

“You succeeded. Very . . . Christmassy.” Ty had won his fair share of poker games, but he wasn’t that good an actor. Best not to say too much. “Though glass balls and barn cats are never a good combination. I cleaned up the mess and took the others off before they broke.”

“I’ve never had a cat. Sorry.” She sounded contrite. “What about the rest of the decorations?”

“Never seen so many lights in a barn before.”

Meg’s forehead creased. “The lights were in the plastic bins sitting with the decorations.”

That explained why there were so many. “Those lights are for the entire ranch.”

The one word said more than twenty could. He pressed his lips together, glimpsed the bottom of a ladder. She must have worked through the night putting up the lights and decorations herself. He might not like what she did, but he appreciated the effort.

“No worries.” He had none. Summer, their busiest season, had been a sellout. Reservations for next year looked solid. Livestock sales had been good, too. Finances and impending foreclosure were no longer concerns, unlike a few years ago when Ralph Vaughn, the late owner of the Bar V5 and Nate’s father, nearly lost the ranch. “We can buy more lights. Maybe some of the LED ones.”

She nodded, but the sparkle in her eyes had dimmed. She dragged her teeth over her lip.

El gran espectáculo secreto by Clive Barker
William Styron: The Collected Novels: Lie Down in Darkness, Set This House on Fire, The Confessions of Nat Turner, and Sophie's Choice by Styron, William
The Warrior's Forbidden Virgin by Michelle Willingham
Gasp (Visions) by Lisa McMann
Never Marry a Cowboy by Lorraine Heath
Give Us This Day by Delderfield, R.F.
Empire of the Sun by J. G. Ballard
White Wolf by Susan Edwards
Agent Angus by K. L. Denman
Volunteering for the Doctors by Heather Mask
Our partner