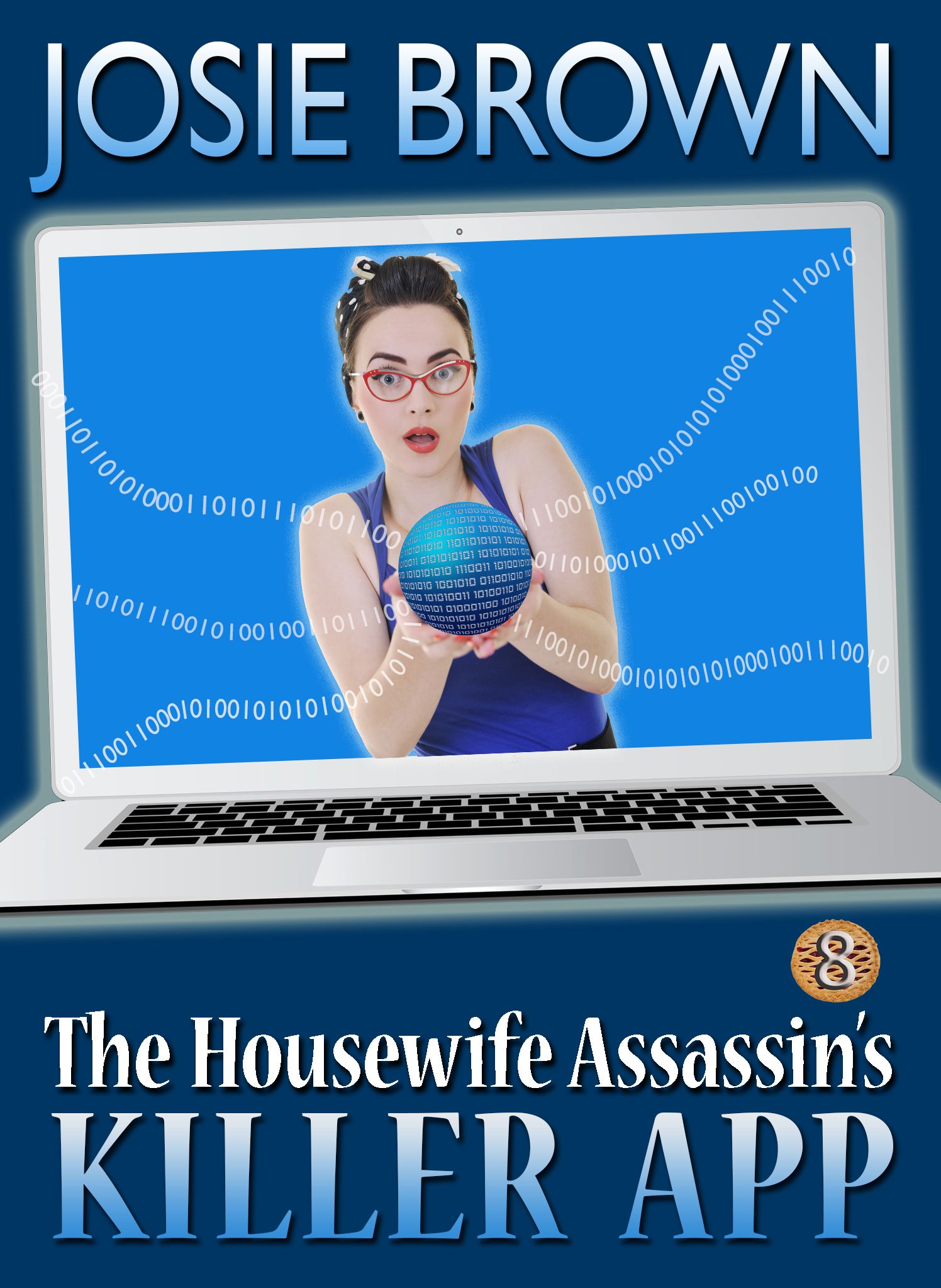 Chapter 9 We’re Off to See the Wizard

Despite our claim to be great at multitasking, the fact of the matter is that, unlike computers and their offshoots of smart phones and electronic tablets, human beings can only pay attention to one thing at a time.

This is where a well-designed app (short for “application”) comes in!

The “principle of least astonishment,” or POLA, is the app designer’s mandate to ensure that these little software goodies think through the logistics of getting from Point A (for example, “I wonder if I can download a book…”) to Point B (“Wow! Yes, I can. In fact I can search for all sorts of books, and within different online bookstores…”) to Point C (“Gee, I can purchase and download the book into my account, and read it on any of my ever-growing number of devices!”)—

So that all you have to do is push a button to get what you want!

In fact, a well-designed app is like a great lover because it:

A: Anticipates your every need, want, and desire.

B: Listens to your instructions, and performs accordingly.

For some reason, no one has perfected a Husband app. Go figure.

“Do you work for UPS? I could have sworn I saw you checking out my package.” The portly goombah whispering this pick-up line into my ear is Walt “the Wolf” Squarcialupi, a capo with the Carducci crime syndicate.

Believe it or not, I’ve heard worse pick-up lines. Tonight, in fact. In other words, the wise guys who frequent Mama Giacomini’s Ristorante in New York’s Little Italy aren’t the silver-tongued devils they imagine.

No wonder this infamous mob hangout has trouble holding onto its waitresses.

If all goes well, I’ll be the next to turn in my uniform. Not that there’s much to it—just a too-tight, barely-there vest worn over short-shorts that would make a Hooters girl blush. To add to my image as a woman willing to do anything for a tip (hopefully a cash one, as opposed to best odds during the fifth race at Belmont), I’m also squeezed into fishnets and totter through the lounge on six-inch heels.

Seriously, Walt the Wolf’s timing couldn’t be worse. Tonight, I’ll be serving Lawrence Raley, an NSA intelligence analyst who made too many losing college basketball bets and couldn’t pay the vig. When Phil “the Fixer” Rugassi, an underboss in the Moretti organization, showed up with a metal bat to collect what was owed, Lawrence convinced him that there’s a much better use for his brains than smearing them all over the sidewalk—

Like assessing the telephone text and voice metadata files of Empire State Technologies, Limited—a phone company that just so happens to be one of the most successful (and supposedly legitimate) assets of the Moretti crime syndicate.

Here’s a newsflash for you: when it comes to organized crime cash cows, the old standbys like drugs, prostitution, and gambling are so last century. A more lucrative new side business is cybercrime. For the Morettis, that means Empire State—which just may be your discount phone company. You see, once you’ve signed up, you’ve given the Morettis your charge card.

But you don’t notice, because you’re having too much fun.

Forget breaking a leg with a lead pipe. Now when the Cosa Nostra reaches out and touches someone, it does it via an auto-debit, to the collective tune of tens of millions of dollars a year.

Lawrence has taken it to the next step. Over the past six months, his data mining on the Morettis’ behalf has pulled up the dirty little secrets on rival mobsters like the Carduccis, who enjoy generous “family plan” discounts with Empire State. He’s also given the Moretti Syndicate enough dirt to blackmail a few celebrities, not to mention a politician or two.

It’s one of these politicians who asked my employer, Acme Industries, to pull the plug on the Morettis’ new venture.

As you can imagine, this is an important operation for Acme. Not only will a successful racketeering sting endear us to the FBI, it should help us avoid losing our own very lucrative contract with the NSA.

So, no, I can’t let Walt the Wolf get in my way. I pop my gum in his face, but he takes it as a sign that I’m being coy.

His follow-up line is pretty blunt: “You know how I know we’re gonna have sex later? Because I’m stronger than you.”

“Promises, promises,” I coo. I let my gaze fall to his crotch. Seriously, if there’s a bulge there, I can’t see it. Maybe I need glasses. Still, I open my eyes wide to feign awe and wonder.

I deserve an Academy Award for this performance.

With a wink and a come-hither smile, I beckon him into the ladies’ room, then lock the door behind us. A moment later, my punch to his throat, followed by a knee to the gonads and a sharp elbow to the back of his head, leaves him face down in a toilet.

So that he gets the point that I don’t take threats lightly, I flush it a few times.

Everyone can use a facial now and then.

“Mrs. Stone, try your best to stay on track,” my boss, Ryan Clancy, mutters into the wireless ear bud too tiny to be seen, even if my right ear wasn’t hidden beneath a long, blond feather-cut wig. To hold its pouf in place, I have a banana clip secured at the crown. It’s teased up so high that I have to duck to clear the doorsill.

“With all due respect, Ryan”—I’m feeling like a Jersey girl, what can I say?—“I had to shake the guy somehow. Can I help it that I’m the only woman in this joint who isn’t making goo-goo eyes at the piano player?”

I can’t see it, but I can imagine the smirk on Ryan’s face. “That’s only because he’ll be going home with you tonight.”

He’s got that right. The man with his finger on the pulse of his audience’s rapidly beating hearts is none other than my main squeeze and mission partner, Jack Craig.

He wears a custom Armani tuxedo that fits his man-candy physique like a glove. The way he’s crooning
In the Wee Small Hours of the Morning
, you’d swear Ol’ Blue Eyes himself coached him on which beats to hold the longest in order to tug at a woman’s heartstrings.

In their minds, he’s fabulicious.

“Donna, you’ve got a customer.” That’s Ryan’s way of telling me Phil the Fixer has arrived.

And off to work we go.

But, by the looks of things, it isn’t going to be easy to get Phil’s attention. He’s brought a woman—some teased-out tart, barely twenty if that, with a
Penthouse
-worthy set of knockers and a ’do that’s high enough to stop radio transmissions in a six-block radius.

“My God, is that his wife? She’s got to be thirty years younger than him,” I murmur to Ryan.

“Hardly. Like Phil, Angelina Rugassi is in her fifties. She also happens to be the daughter of a capo with the Carducci family.”

Noting my gaze, Phil gives me the once-over and a wink. I murmur, “Talk about playing with fire.”

The mobster and his cupcake take the booth reserved for them—the one farthest from the piano. Even at that distance, it only takes Cupcake a minute to fall under Jack’s spell. Phil realizes this too and raises a brow at me, as if to say,
Don’t be shy
.

He’s got nothing to worry about in that regard. My mission is to get close enough to him so that, when the time is right, I can switch Lawrence’s thumb drive with mine, which will release a worm into the Moretti syndicate’s database.

“What can I get you?” My question is innocent enough, but the way I say it, so slow and husky, leaves nothing to the imagination—Phil’s, anyway.

He nods in Cupcake’s direction. “Get the little lady anything her heart desires.”

“Martini,” Cupcake purrs without turning her head. “Dry as toast.”

“I’ll have one too. And two orders of the calamad, and two of the linguini and clams, and a side of mozzarel.” Even as Phil slides closer to her, he sticks a fifty-dollar bill between my breasts and winks. “Keep me happy, and there’s more where this came from.”

I have half a mind to tell him that he’ll need it to buy cigs in prison, but then I remember Ryan told me I could hold onto my tips, so hell yeah, I’m keeping it.

Besides, the others in the crowd are lousy drinkers, and even worse tippers. You’d think that, with all the salivating they’re doing over Jack, they’d be thirstier.

Noting Phil’s generosity, Cupcake snaps her fingers at her sugar daddy. “Gimme sumthin’ for the
pee
-an-is.” Because she said it with a silent T, it sounds as if she’s said, “penis.”

Over her dead body.

The bill he hands her is a Benjamin.

Jack’s tip will be bigger than mine?

She smirks over at me as she shimmies out of the booth and toward Jack.

Phil murmurs, “I like my women like my meatballs—soft, round, and extra spicy.” He winks knowingly as he runs his eyes over my posterior.

Oh boy. Another lousy pick-up line. These guys need new material. The next time the lounge manager wants to do his patrons a favor, he should hire a dating coach for the floorshow.

Frankly, Phil deserves the same treatment as the last guy. But, ironically, I’m not here to put a hit on him, but to hit
on
him. I bat my lashes and murmur, “Sure. Look me up if she runs off with the pee-an-is.”

He’s still roaring with laughter when Lawrence stumbles into the lounge. Seeing Phil, Lawrence straightens his collar and heads over to the table.

I wait until he plops down beside Phil before asking, “And what can I get for you, sir?”

I can tell there won’t be a lot of small talk between these two guys, so I’ve got to move fast. I give their orders to the bartender and tell him there’s a twenty if he can turn the drinks around as fast as possible, along with their pasta.

The bartender is on it, like lightning. The night is slow, what with most of the ladies ordering the lounge’s ready-made mix of Snooki Snacks.

The Space Between by Thompson, Nikki Mathis
The Sister: A psychological thriller with a brilliant twist you won't see coming by Louise Jensen
PlaybyPlay by Nadia Aidan
Playing the Game by M.Q. Barber
Even Grimmer Tales by Valerie Volk
Darkness Awakened (Primal Heat Trilogy #1) (Order of the Blade) by Rowe, Stephanie
Just Mercy by Bryan Stevenson
Atlantic Fury by Innes, Hammond;
Embrace the Night by Pineiro, Caridad
Amongst Women by John McGahern
Our partner