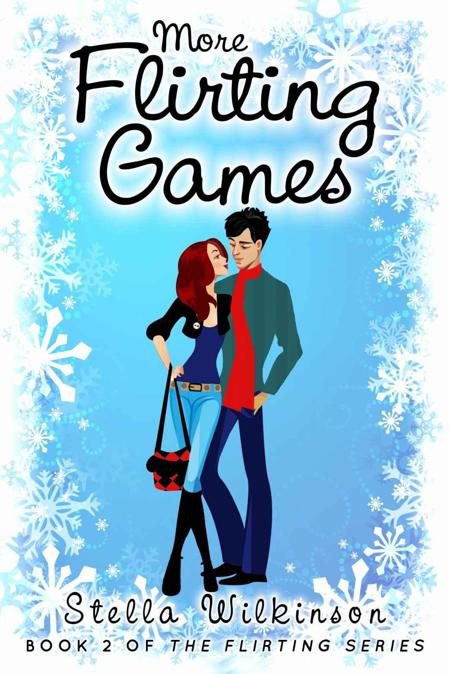 As Rose laughed loudly and placed a paper crown on her head from out of
her cracker, she happened to glance down the table and caught Leo looking at
her.

Rose quickly looking down,
grinning at her plate. She felt so aware of him. She could still feel his eyes,
she concentrated hard on the plate. It was daft but it made her feel
wonderfully happy just because he winked at her.

“What are you smirking
at?” Alex leaned over to examine the plate she had been staring at.

“I’m not smirking!” She
replied still trying not to look at Leo.

“Yes you are, like the cat
that stole the cream.” Jack joined in from across the table.

“Oh don’t be ridiculous!”
She really didn’t want to draw any more attention to herself. Bloody Leo.
Perhaps she could get him back later somehow.

At that moment the new
kitten caused a distraction by jumping on the table to try and catch a spinning
top.

Bending her head again to
her food she allowed her hair to swing in front of her face disguising her
expression as she began to smile again.

Also available by
this author

This book was
written, produced and edited in the UK where some grammar and word usage may
vary slightly from US English

All characters herein
are fictitious and any resemblance to real persons, living or dead, is purely
coincidental.

who started it all
off

Boys, boys,
boys! That’s all Sophie and Grace seemed to talk about this year. Maybe they’d
throw in a little gossip, clothes, magazines and make-up. But otherwise it was
boys. Boys they might like and the boy band they definitely liked, boys they
knew and boys they wanted to know. School came a very poor second.

Rose Falcon
was really enjoying being back at school this year. The summer had been great
but her parents were always working and she had missed the girls. She and her
younger brother Toby had spent three weeks of the holidays with her cousins,
Jack, Alex and Ellie, but she had been on the phone almost every day to Sophie
or Grace, or both of them.

She
supposed that officially Alex was her best friend. Even though they were
cousins, they had been born only days apart and had been close their whole
lives, but at sixteen she had found that she and Alex had started to drift
apart slightly. They were both in the same year at Compass Court Boarding
School and both in the same Schoolhouse, West Tower, but this year she just
seemed to be hanging out a lot more with Sophie and Grace and seeing less of
Alex.

At a
certain age you just needed good girlfriends, and Alex certainly didn’t want to
talk about boys.

Rose,
Sophie and Grace had shared a dormitory at Compass Court since they had started
at the school over five years ago and though the three of them were very
different they had bonded instantly.

Rose was
arty, she wore her long wavy hair loose and when she was out of school uniform
she tended to favor brightly colored clothes and floaty dresses that
complemented her auburn hair. She thought her tummy and her bum were too big,
but they were curves which suited her well.

Sophie was
always fashionable, with a perfect hourglass figure; she wore her jumpers tight
and her skirts short. Her blond hair was highlighted and she spent ages every
morning with a pair of straighteners getting her bobbed cut sleek and shiny so
it curled just under her jaw line.

Grace, on
the other hand, always pulled her brown-blond hair into a ponytail; she was the
practical one of the three. Small and slim, she envied the curves of her
friends and favored much more casual wear. Jeans, fluffy jumpers and knee-high
boots were all she would consider at this time of year and she rarely bothered
with make up.

The fourth
girl in their room, Diana, had never really been their friend.

Diana
didn’t seem to have or want female friends. She was thin and had perfect,
porcelain white skin, with an oval face, dark eyes and naturally red lips.
There were a few girls in the year below who hung on her every word and tried
to copy her waist length long dark hair, but she seemed hardly to notice them.
Her aloofness seemed to make her even more attractive to boys, who fought to
sit next to her and carry her books, but she acted as though they were merely
annoying and had said ‘no’ the only two times a boy had been brave enough to
ask her if she wanted to go on a date with him. Rose thought Diana was very
beautiful but very cold.

The only
person Diana was close to was Leo Flanagan. Both Diana and Leo were Irish,
though both their families now lived in England, only about half a mile away
from each other by all accounts. Rose thought that Diana and Leo might be
related, but as neither of them spoke much to her or her friends she didn’t
really know.

“Who are
you looking at?” Sophie nudged Rose out of her reverie.

“No one.”
Rose shook her head. “What were we talking about?”

“I was just
saying what a dry term it’s been for boyfriends. It’s Christmas already and
we’re all still single.” Said Grace

It was the
20
th
of December on the last day of their first term in Year Six. It
was dark by five o’clock now and the Common Rooms were the coziest place to be
in the evenings. The three of them were sitting in the West Tower Common Room,
enjoying the fact that as it was the end of term, they didn’t have to do any
studying. They had a low coffee table at one end of the room with a sofa and a
leather armchair that they always tried to occupy to before anyone else. It was
comfortable and intimate. There were no other seats close by so no one could
overhear their conversations. Across the room in an alcove under a tall lamp,
Leo and Diana had a little table for two and it looked like they were actually
doing homework.

“And I was
wondering what’s going on with you and Ben Castle this year?” Grace continued
as she swiveled sideways on the sofa to rest her feet against the radiator on
the wall.

Rose
shrugged. “You know how it is with me and Ben, he asks me out, eventually we
kiss and then it just seems to fizzle out.”

“So are you
going out or not?” Grace furrowed her brow in confusion.

“Beats me.
I would say probably
not,
seeing as we haven’t spoken in over a month.
We had that snog at Halloween and we spent most of the evening talking. But
we’ve hardly had time to speak since. He’s always got sporting commitments and
I’ve been working on my English coursework most nights. It all just seems a bit
of an effort to find the time and I’m not going to chase after him.”

“I think
you should just dump him once and for all,” said Sophie. “You two have been
on-again off-again since the first year, you’ve never done more than kiss and
neither of you is getting the chance to date anyone else.”

“That’s
true.” Rose thought back to her first year. It was Alex who had befriended Ben,
they were in the same biology class and he had introduced him to her.

Ben was
considered very attractive, though not traditionally handsome. He stood at over
six feet and his large frame was reassuringly solid but his gentle personality
made you feel you would be safe with him. He had brown hair that had a tendency
to curl, big brown eyes and a friendly wide smile. There was something very
appealing about his open countenance. So it was all the more confusing that he
blew hot and cold with their relationship.

“The thing
is,” Rose continued, “there isn’t really anyone else I want to date anyway.”

“No. The
talent has totally dropped off now that Jack’s gone.” Sophie pouted. Rose
laughed, as Sophie’s crush on Jack had been extreme and unrequited for several
years.

“But I
don’t want to date Jack.” Rose joked “That would be gross; he’s my cousin.”

Sophie
kicked Rose’s foot off the table to show how little she thought of the joke.

“Sorry,
Soph.” Her face softened at her friend’s down-turned mouth. “One day Jack will
notice how lovely you are.”

Sophie
glanced at Grace. They both knew that Jack had already noticed Sophie, but had
decided not to tell Rose as she would only rail at Jack about it. Grace saw the
look and nodded imperceptibly to show she still knew not to say anything.

Sophie and
Jack had gotten together at the end of year dance for the Upper School at the
beginning of the summer. More than gotten together. The trouble was that they
had both gone home the next day and although Sophie had given Jack her phone
number, he had never called. She was too embarrassed to tell Rose. Rose had
spent some of the summer holidays with Jack’s family and she would have forced
him to call Sophie. After discussing it with Grace, Sophie had decided this
would be worse than Jack not calling. Unfortunately, Jack had now left Compass
Court for University and Sophie was despairing of when she might get another
chance to speak to him without looking obvious.

“Anyway,”
said Rose “Didn’t you have a bit of a thing going this term with Danny Barnett
in Year 5?”

“Barely.”
Sophie snorted. “At first I thought he was cute, with his boy band looks and that
fab hair.”

“His hair
is only like that because he puts so much gel in it.” Grace said.

“Totally.
Anyway, cute or not, he turned out to be really vain and immature. It lasted
what? Only two or three weeks before he got on my nerves. I think he thought because
I was in Year Six I would be easy or something. I’m not going to date anyone
younger than me again.” Sophie stated.

“We were in
the fifth year only a few months ago.” Grace reminded her with humor.

“Yes but
we’re girls, we mature a lot faster. Danny was not decent boyfriend material.
He actually seemed to think I would be impressed if he could guess my bra size
correctly.” She rolled her eyes and then rounded on Grace. “Let’s not forget
about you. What’s your tally been this term? Even worse than us, the only
action you’ve seen is that you spent the North Tower Christmas Party in a
corner with Jerry! What were you thinking? He’s hardly brain of the year.”

“I’ll bet
you do. And just how big is Jerry?” Sophie waggled her eyebrows suggestively.

“Not like
that!” Grace laughed and threw a cushion at her. “You know what I mean. I like
a bit of muscle on a man. I can’t stand skinny bony boys.”

“Maybe
you
should date Ben then instead of me.” Rose joked.

“Yes,
because that’s what friends do to each other.” Grace said sarcastically.

“Well, as
you know it doesn’t look like my parents will be able to leave South America until
early next year,” Rose chewed her lip, “and Uncle John is training troops right
up until Christmas day. So Jack’s organized it that we all stay at school
during the holidays and his parents are coming just for Christmas lunch.” By
‘all’ Rose meant herself, her brother Toby, and her three cousins, Jack, Alex
and Ellie.