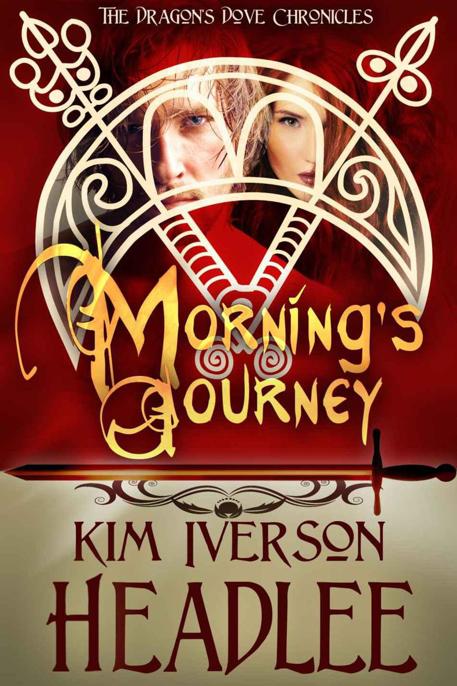 All rights reserved, including the right to reproduce this book or portions thereof in any form, with the exception of brief excerpts for the purpose of review. This book is a work of fiction. Names, characters, places and incidents are products of the author’s imagination or are used fictitiously. Any resemblance to actual events or locales or persons, living or dead, is entirely coincidental.

This e-book is licensed for your personal enjoyment only. This e-book may not be resold. If you’re reading this book and did not purchase it, or it was not purchased for your use, then please purchase your own copy. Thank you for respecting the hard work of this author.

T
HE CLASH OF arms resounds in the torchlit corridor. Blood oozes where leather has yielded to the bite of steel, yet both sweating, panting warriors refuse to relent.

Her heart thundering, Gyan grips her sword’s hilt, desperate to help the man she loves. Caledonach law forbids it.

Urien makes a low lunge. As Arthur tries to whirl clear, the blade tears a gash in his shield-side thigh. The injured leg collapses, and Arthur drops to one knee. Crowing triumphantly, Urien raises his sword for the deathblow.

Gyan springs to block the stroke. Its force jars her arms and twists the hilt in her grasp. She barely holds on through the searing pain.

Urien slips past her guard to slice at her brooch. The gold dragon clatters to the floor. Her cloak slithers to her ankles, fouling her stance. As she tries to kick free, Urien grabs her braid, jerks up her head, and kisses her, hard. Shock loosens her grip. Her sword falls. She thrashes and writhes, but he holds her fast, smirking lewdly.

“You are mine, Pictish whore.”

Urien’s breath reeks of ale and evil promises. She spits in his face. He slaps her. She reels backward, her cheek burning. He grabs her forearms and yanks her close.

Her spirits plummet. Weaponless, she can do nothing—wait. A glint catches her eye.

When Urien kisses her again, she surrenders. He grunts his pleasure, redoubling the force of the kiss. Slowly, she works her hands over his chest until her left hand touches cold bronze on his shoulder. She snatches the brooch and rips it free, hoping to stab him with the pin.

Her elation vanishes with her balance as her tangled cloak thwarts her plans. Face contorted with rage, Urien lunges and catches her wrist. She grits her teeth as his fingers dig in to make her drop the brooch. Pain shoots up her arm. She pushes away. Together, they fall—

GYAN GASPED and sat bolt upright, pulse hammering. Sweat plastered her hair to her head, which felt like the ball in an all-night game of buill-coise. Bed linens ensnared her legs.

Fingers grazed her shoulder. She recoiled and cocked a fist. Her consort ducked behind his hand. “Easy, Gyan!” She relaxed, and he wrapped his arm about her. “What’s wrong?”

She pressed the heels of her hands to her eyes. “A dream,” she replied, hoping that for once he’d be satisfied with a vague answer.

She sighed. “It was the fight—and yet not the fight.” Gently, she traced the thin red line at the base of his neck where she’d scratched him with Caleberyllus to seal his Oath of Fealty to her and to her clan. But dreams cared naught for oaths. “This time, Urien won.”

Arthur grimaced. “That’s no dream.” He hugged her, and she burrowed into his embrace. “I’d call it a nightmare.”

“Ha.” She bent forward to disengage the linens from her feet. The unyielding fabric ignited her ire. She pounded the straw-stuffed mattress, furious at Urien and even more furious at herself for allowing him to creep into her wedding chamber, if only in spirit. “Why must that cù-puc keep coming between us?” She gazed at the table where Braonshaffir, named for the egg-size sapphire that crowned its hilt, lay sheathed inside its etched bronze scabbard beside Caleberyllus. Indulging in the fantasy of her new sword shearing through Urien’s neck, she bared her teeth in a fierce grin. “Just let him cross me openly, and by the One God, I’ll settle this matter!”

Arthur’s warm sigh ruffled her hair. Together they righted the linens, but when she would have risen, he clasped her hands and regarded her earnestly. “I can’t afford to lose either of you.”

She looked at those hands, young and yet already scarred and callused by years of war: hands that cradled the future of Breatein. “I know.” Briefly, she squeezed his hands, hoping to convey her desire to help him forge unity among his people, the Breatanaich, as well as with Caledonaich, her countrymen.

One legion soldier in five called the northwestern Breatanach territory of Dailriata home, and one in three of those men hailed from Urien’s own Clan Móran. In a duel between Gyan and Urien, Arthur’s Dailriatanach alliance would die regardless of the victor.

If politics ever failed to constrain the Urien of the waking world, however, she couldn’t guarantee that diplomacy would govern her response.

She averted her gaze again to the table where their arms and adornments lay. Their dragon cloak-pins sparked a memory. Something else had been odd about that dream, but its details had receded like the morning tide. She couldn’t decide whether to be troubled or relieved.

Closing her eyes, she inhaled deeply, trying to purge Urien map Dumarec from her mind. Moist pressure against her lips announced her consort’s plans. She welcomed his kiss and deepened it. He ran his fingers through her unbraided hair, following the tresses down her neck and over her breasts. Her nipples firmed under his touch. She arched back, and he kissed his way down to one breast, then the other, drawing the nipples forth even farther and awakening the exquisite ache in her banasròn.

The swelling shaft of sunlight heralded a reminder of their duties.

“The cavalry games will be starting soon, mo laochan.” No other man had earned the Caledonaiche endearment from her, and none ever would. Her “little champion” bore her down onto the pillows, and his lips interrupted any other comment she might have made. As they explored the curve of her throat, she whispered, “We must make an appearance.”

“We will, Gyan.” His fingertips teased her banasròn, discovering its damp readiness. “Eventually.”

She stilled his hand. He looked at her, puzzled.

Being àrd-banoigin obligated her to ensure her clan’s future by bearing heirs, but was she ready to abandon the warrior’s path and devote her life to a bairn? She gave a mental shrug. A swift calculation assured her that her courses would return soon, leaving the question to be faced another day. Smiling, she began caressing one of the reasons he’d earned “laochan” as an endearment.

He cupped her face and kissed her, urgency for both of them soaring on the wings of desire. His thigh rubbed hers with slow, firm strokes. Gyanhumara nic Hymar, Chieftainess of Clan Argyll of Caledon, yielded to her consort’s unspoken command. She opened to him, and he plunged her into their sacred realm of mind-blanking bliss.

Whenever Arthur map Uther, Pendragon of Breatein, issued an order, on the battlefield or off, only a fool disobeyed.

TRENCHER LADEN with goat’s cheese and steaming black bread, and the kitchen’s clamor and aromas and warmth at his back, Angusel mac Alayna stood in the feast hall’s doorway. Most joining-ceremony guests—clan rulers and their escorts, religious leaders, craftmasters, and merchants prominent enough to have been extended an invitation—hadn’t stirred from their quarters. Some sprawled where sleep had overtaken them, snoring fitfully through ale-soaked dreams.

Though he couldn’t see the voice’s owner, he knew only one Caledonach who could sound like a thunderclap without trying. He headed toward the shout.

He found Gyan’s father at a table below the dais, methodically destroying a loaf of bread and a mound of bilberries and slices of early apples, pausing at intervals to bury his face in his tankard. After wiping the creamy flecks from his graying sable mustache and beard with the back of a hand, he resumed the attack on his trencher. Peredur and Rhys, Gyan’s half brother and clansman, flanked him.

All three had dressed for battle in traditional Caledonach bronze helmets and forearm guards, boiled-leather tunics, thick leggings, and knee-high boots, nary a detail missing except their weapons.

“Sit, sit,” urged the Chieftain of Clan Argyll between mouthfuls with an impatient gesture toward the bench. “Hurry. After you finish eating, you must change.”

Angusel glanced at his sky-blue linen tunic and back at Chieftain Ogryvan. “My lord?”

“The games, Angusel. The games!” As Angusel obeyed and dug in, with Rhys pouring him a tankard, the chieftain explained, “The drink has left Conall in no shape to ride. We need a fourth.”

Surprise made him gag on a hunk of cheese. He swallowed hard. “Me, sir?” He took a swig of ale without tasting it. He could think of a hundred reasons why this was a bad idea, starting with his age and lack of experience.

“Of course, you.” The chieftain grinned. “Do you see anyone else?”

Angusel looked about. Another man sat crumpled over the far end of the table. With his cloak balled into a pillow, his clan affiliation couldn’t be discerned, but the loudness of his snores proclaimed him to be in no condition to ride, either.

He cleared his throat. “But, my lord, I am not of Argyll.”

“Not by blood, Exalted Heir of Clan Alban,” Chieftain Ogryvan allowed, “but your heart is Argyll.”

Angusel’s hand went to the scar at the base of his neck, symbol of his oath to the woman whose father regarded him so intently.