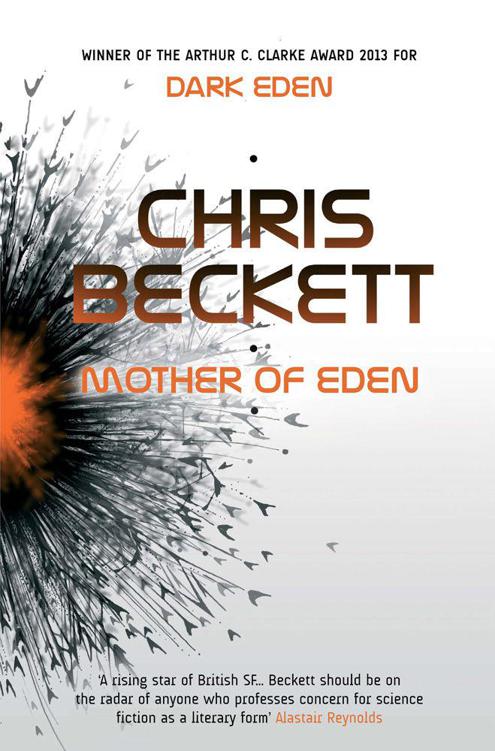 Chris Beckett is a university lecturer living in Cambridge. He has written over 20 short stories, many of them originally published in
Interzone
and
Asimov’s
. He is the winner of the Edge Hill Short Story competition, 2009, for
The Turing Test
, as well as the prestigious Arthur C. Clarke award, 2013, for
Dark Eden
.

First published in the United States in 2015 by Broadway Books, an imprint of the Crown Publishing Group, a division of Penguin Random House LLC, New York.

Published in hardback in Great Britain in 2015 by Corvus, an imprint of Atlantic Books Ltd.

The moral right of Chris Beckett to be identified as the author of this work has been asserted by him in accordance with the Copyright, Designs and Patents Act of 1988.

This novel is entirely a work of fiction. The names, characters and incidents portrayed in it are the work of the author’s imagination. Any resemblance to actual persons, living or dead, events or localities, is entirely coincidental.

For my three sisters, with much love

The trouble began on the waking I left Mikey with his dad on the Sand for the first time, and went out gathering bark with my uncle Dixon, my brother Johnny, and my sister Starlight. Johnny had just come back over from Nob Head, and as we paddled through the trees, he told us the news he’d heard there.

“I’ll tell you a
really
interesting thing,” he said.

Hmmmph hmmmph hmmmph
went the tall trees in the water all round us. Everything was the same as it had always been. The sky was black above us. The treelanterns shone. The wavyweed glowed beneath the water.

“Yeah, a really strange thing,” Johnny said. “I didn’t know what to make of it. I was speaking to that guy Harry over there—
you know, old clawfoot Harry with the missing fingers?—
and he said that blokes have been coming over to Mainground lately from right across far side of Worldpool. Not to Nob Head itself, mind you, but further down alpway to places like Veeklehouse and Brown River. And, if you can believe this, he said they bring
metal
with them. Not bits of metal from Earth, but metal they’ve found for themselves in the ground here in Eden.”

Johnny’s news felt to me like the breeze that came in from Deep Darkness before a storm: It was nothing in itself—
all it did was make the lanternflowers sway a little on their branches—
but you knew it was just the start. Metal meant change. Metal was something to fight over, like the followers of John and David used to fight and fight over that metal ring from Earth. I thought of my little Mikey back on the Sand, and I imagined a storm of blood breaking over him.

“You don’t want to believe everything Harry says. He’d tell you a starship had come from Earth if he thought you’d swallow it.”

Splash splash splash
went our paddles. And behind the rhythm of our paddles, which was a sound that stopped and started, came and went, was that older rhythm, which never never changed.
Hmmmmph hmmmmph hmmmmph
went the trees, as they pumped their sap down to the heat of Underworld, far far below.

“It
could
be true, Uncle,” Starlight said.

She looked at our uncle with those beautiful, sharp gray eyes of hers that always seemed to see right through you. People told me mine were the same, but of course I’d never seen them.

“We know John Redlantern set out to cross Worldpool, don’t we?” she pointed out. “Him and some other Johnfolk. When they got tired of all the fighting on Mainground after Breakup.”

“Yeah. They set out in little log-
boats to cross Deep Darkness. But you know what it’s like out there, Starlight. You know how big the waves are. No way could they have made it. No way. Their bones are somewhere out there on the bottom, no doubt about it, along with John’s precious ring.”

“We’ve always thought that,” Starlight said, “because no one has heard from them since. But perhaps they made it after all?”

A little jewel-
bat came darting by us just above the water, trailing its tiny fingertips in the smooth surface.

“Yeah, that’s what I thought,” said Johnny. “And it wasn’t just Harry who told me. Another guy said the same thing: John and the others
did
make it across Worldpool, and they figured out how to get metal from the ground.”

“And who was this other bloke, exactly?” Dixon asked with a knowing smile. “Not Harry’s batfaced friend Dave, by any chance?”

“Well, yeah, it was Dave, actually. But still. It
could
be true.”

“It
could
be. Anything
could
be, but I’m sure it’s not. Even if John’s lot did make it to the other side, which I’m sure they didn’t, why would they come back? Whole point of going there was to make a new start without the Davidfolk to fight against.”

Splash splash splash.
We paddled on. All around us the tall knee trees rose up, straight at first, then bending over toward Mainground and letting down their greeny-
yellow lanternflowers over the shallow water. They made me think of mothers bending down over their children. But that waking, when I’d left Mikey behind for the first time,
everything
made me think of mums and kids.

Johnny had had me worried for a moment, but Dixon made me feel better. It was just a silly story, I decided, and I started to enjoy myself again, out on the water with the lanternflowers and their reflections all around me.

When we were kids, Mum used to tell us to half close our eyes and pretend we were in a starship with the lanternflowers as stars. And in few wombtimes, I would play that same game with Mikey. I imagined him screwing up his little eyes, just like Starlight used to do when she was little. It felt good good, thinking about those childhood pleasures coming round again, specially when I knew I’d give Mikey many many more of them than our mum had been able to give to us.

“That’s the first one,” he said. “That ought to be good and ready.”

There was a tree ahead of us that had a long oval cut into its bark right at the place where the trunk bent over: the
knee,
as we called it. We took the boat up to it and Uncle Dixon heaved himself over the side while the three of us leaned the other way to keep the balance.

There were pegs driven into the trunk. He put his foot on the lowest one, his hand on the highest one he could reach, and, big guy though he was, hauled himself nimbly straight up, carefully avoiding touching the hot trunk itself. Straight away, while we climbed out of the boat, he began tap-
tap-
tapping at the oval of bark, his white belly hanging out over the rough buckskin tied around his middle, and his face beginning to sweat and redden with the heat.

Harummmph
sighed the tree and, from an airhole high above us in its eighty-
foot trunk, it released a puff of steam.

Hmmmph hmmmph
went the trees all around, merging together into that deep, steady
hmmmmmm
that you could hear when you drew near to the Grounds from the open water beyond.

I imagined Mikey learning how to make boats when he grew older. I imagined him coming out here one waking with
his
kids and telling them to half close their eyes and pretend they were floating through the stars.

Ilium by Dan Simmons
Christmas at Tiffany's by Marianne Evans
Death in Tuscany by Michele Giuttari
Sins of the Mother by Irene Kelly
The Healer's Warrior by Lewin, Renee
Shots in the Dark by Allyson K Abbott
Black Night by Christina Henry
The War Hound and the World's Pain by Michael Moorcock
The Boric Acid Murder by Camille Minichino
Sneaking a Peek by Eden Summers
Our partner