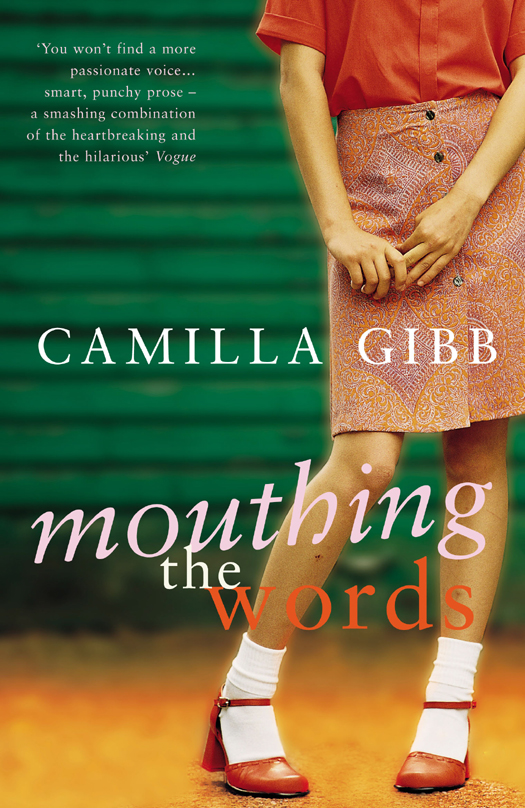 Thelma is six years old. Life at home is unsettling and disturbing; her father’s games are not enjoyable and her mother dotes on Willy, the favoured child. When her parents move to Canada, Thelma smuggles her imaginary friends with her in her suitcase.

By turns harrowing and wonderfully funny,
Mouthing the Words
tells Thelma’s story of sexual abuse, anorexia, borderline multiple personality disorder and her return to England. Reminiscent of Jeanette Winterson and Sylvia Plath,
Mouthing the Words
is a remarkable and inspiring fiction debut. 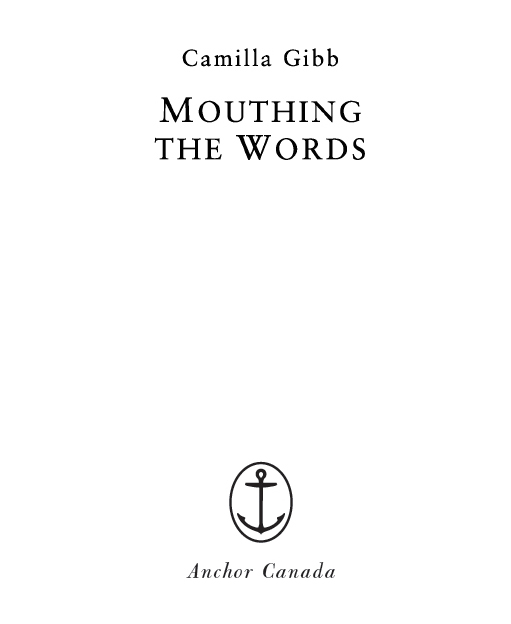 All rights reserved. The use of any part of this publication, reproduced, transmitted in any form or by any means electronic, mechanical, photocopying, recording or otherwise, or stored in a retrieval system without the prior written consent of the publisher—or in the case of photocopying or other reprographic copying, license from the Canadian Copyright Licensing agency—is an infringement of the copyright law.

Anchor Canada is a registered trademark.

Library and Archives of Canada Cataloguing in Publication data is available upon request.

Mouthing the Words is a work of fiction. Names, characters, places and incidents are products of the author’s imagination or are used fictitiously. Any resemblance to actual events or locales or persons, living or dead, is entirely coincidental.

Published in Canada by Doubleday Canada, a division of Random House of Canada Limited
A Penguin Random House Company

In an English Garden

Girl with a Suitcase

Fork on the Left

But the Greatest of These is Love

Who Needs a U-Haul?

Not Designed for Comfort

In an English Garden

THIS IS WHERE
the man called our father comes from: he is sitting in a barn with his brothers Garreth and Timothy on a rainy April afternoon in the Cotswolds. Garreth, two years his senior, is home for the Easter Holidays, having just completed his second term at the Wheaton School. Mother Puff, named for the soft grey sponge of hair that frames her face, has been gurgling about her eldest—“isn’t he quite the little gentleman now”—for the better part of the day. Five-year-old Timothy sits mute for most of his waking hours, his cheeks permanently inflated with a store of Liquorice Allsorts.

Douglas is in the middle—too young for boarding school, and usurped, in the candy-coated affections of his mother, by his younger brother. He is broody and introverted, with what will ultimately be his dramatic early hair loss already in evidence in the recession
above
his furrowed brow. Puff, by way of preventative measure, coats his forehead with an egg white every evening before Douglas says goodnight. In bed he dreams of being an allied bomber pilot and though out of dreamtime a real war is going on, there is nevertheless always an egg to be spared for Douglas’s head.

This extravagance secretly infuriates father Hugo. Puff cracks a warm peacock egg over the rim of a white porcelain bowl and says, “Well, I’m going to see that our young Doug is the proudest peacock of all.” As Gloucestershire’s most esteemed ornamental bird farmer, Hugo trembles when he sees the fruits of his labour wasted on the thick skull of his middle son. He cannot argue, though, because this is, after all, a house dominated by Puff’s repertoire of rather strange ideas.

On this particular afternoon—in one of her idiosyncratic and perversely well-intentioned attempts at parenting—Puff has locked the boys together in the barn. She has decided that the best way to ensure her three boys cultivate a lifelong dislike for the taste of evil is to let them spend several daylight hours indulging in gin and tobacco and making themselves “sick as sin.”

While the details of what ensues behind the locked door of the barn go unrecorded in the annals of the collective family history, the irony of the endeavour is not lost on future generations. All three boys grow up to favour grain spirits over meaningful connections to other people.

Our father, Douglas Tate Barley, was the one of the three brothers conveniently blessed with initials describing what for his pre-teen children seemed like one of the more embarrassing side effects of his condition. Of course, we did for years think that all daddies shook.

Somehow all three of the boys ultimately marry, though not without controversy. Garreth appears to have married Cassandra because Cassandra used to be Douglas’s girlfriend. At least it seems that way given comments like: “I did her a favour, Douglas. She was far too bloody good for you.” Cassandra is from Australia, and this fact causes father Hugo to go to his grave saying things like: “We shipped her kind off to the blasted colonies for a reason.”

Timothy asks Louise to marry him because (although he is admittedly enchanted) on the evening he introduces her to his parents, his father says, “Now that’s a bloody gonk if I ever saw one.” Surely the timing of this proposal cannot have been mere coincidence.

The man who is to become our father marries the woman Garreth is discovered clambering on top of in the back seat of his Rover six-and-a-half days after his wedding to Cassandra. Douglas has just been discharged from the army for some unknown indiscretion and he does not know what to do apart from getting married. Poor Cassandra attends the wedding of my
future
parents and appears to be the one most moved to tears by the sight of the lovely bride.

Rather cleverly though, my soon-to-be father has managed to marry the daughter of an RAF captain who he assumes will help get him reinstated. He is feeling rather proud of himself. Not only is there a potential job on the horizon, but he has successfully transformed Garreth’s indiscretion into Cassandra’s sister-in-law. Like his brothers, though, he is not free from the racist wrath of Hugo. With her long, jet black hair, his new bride Corinna is the object of slurs like, “We didn’t win the bloody war so you could go and marry one of them!”

Lest you should think my future mother but a hapless pawn in this whole exchange, let me assure you, she had her own selfish motives. She positively relished the thought of her father and mother saying:

“Do you think this is why we sent you to finishing school in Switzerland?”

“This just can’t be happening. The son of a peacock farmer, Corinna?” her mother sighed.

At which point my future mother tactfully responded, “Perhaps you could help him find a job, Daddy. He’s just been fired from the army.”

We trust that what we know to be normal is normal simply because it is known to us. Worlds meet in collision and the coherence of our histories crumbles. I feel it in the blank looks I tend to receive at dinner
parties
. When other people recount stories, I habitually interject with statements like, “Oh yeah, I know exactly what you mean. I used to feel just like that when my father held me over the bridge by my armpits.” Eyes previously animated are suddenly staring soberly. “You know?” I might add hopefully. “That bridge over the Don River?” A gracious dinner party host might break the uncomfortable moment with some tactfully placed suggestion of more Stilton. And if I had a lover, this would be the perfect moment to give me a reassuring squeeze of the thigh under the table and whisper something in my ear like, “It’s OK, dear. Just try not to talk.” Often, silence has seemed like the only option.

I used to wonder if people actually did know what I was talking about and were just being particularly stubborn. At home later, I searched a mind of endless tangled fields of bracken and gooseberry bushes, whispering to my imaginary lover in the dark, to whom I described a silent, tiny, perfect world of strangers. “Haven’t you ever seen it? What the world looks like without you in it? Hasn’t anyone ever put you there?” I really don’t have the words to describe it, perhaps nobody else does either, because no one seems to know what I mean. Maybe worlds don’t exist without words.

Enough situations had arisen by the time I was a late teenager that I thought I just might call up one of the many excellent therapists who had been recommended to me. I had a stack of small pieces of paper with
names
and numbers—notes handed to me surreptitiously (and with alarming frequency) under tables, in libraries, in banks and even, and especially for some reason, at museums. I was going to ask one of these professionals just what constituted normal. Being wakened by your father in the middle of the night to hold a sheet of plywood over a window as he nails out the darkness?

So I met Lydia Hutchinson MSW who insisted on hugging me at the end of every forty-five minute session—a threatening gesture of outstretched arms which I spent the next six days of every week dreading. She encouraged me to work out my anger with the aid of a plastic orange baseball bat the size of a nurse shark, a photograph of my father poised on a bright purple throw cushion ready for a good bashing. “But I can’t,” I repeated each time. “Maybe I
am
repressed, but in all likelihood, even if I wasn’t, I hardly think this would be the way I’d choose to express my anger.” A plastic orange object just wouldn’t figure as a weapon of choice in any of my fantasies.

“How would you choose to express your anger then?” she prodded.

“But I’m not even angry!” I protested.

“I’d tell you to fuck off!” I exclaimed.

“Good!” she congratulated me. “A fantasy!”

“Better!” she exclaimed excitedly. “Transference of your anger!”

She had a bit of a transference problem herself. She asked me if Christmas was a particularly tense time and whether my father had ever hit my mother while trimming the tree. I couldn’t remember anything like that happening, and although it seemed possible, I was suspicious when she asked me if my father had ever thrust the silver star at my mother to deliberately pierce her hand. I said “no” and she said “the bastard” and we both looked a little confused. She seemed to have a fixation with fluffy white stuffed animals and because she didn’t seem to be relenting on the idea that I take up the orange baseball bat, one day I suggested she take it and do some of her own bashing.

She offered to demonstrate. She picked up the bat and started rhythmically tap-tapping the concrete wall of her subterranean pillow room. She began lightly, but then worked her way up into a monumental crescendo in which she came out with the most startling range of expletives: “You mother-fucking-ass-licking-cock-suck-ing-shit-ass-bugger-squirrel-fuck!” Squirrel? I didn’t like to ask.

I watched her in amazement and revulsion as she collapsed into her beanbag chair with her normally perfect French braid in tatters and a strange smug glow in her eyes.

“Was that good for you?” I mused sarcastically.

“So good,” she sighed, and then burst out laughing. It gave me the creeps.

Needless to say, the experience left me thinking she was less than qualified to offer me much insight into the world of the normal. I had had enough trouble getting myself to her in the first place. Among my father’s most persistent mantras were, “Cheese gives you nightmares”; “Red hair is a sign of inbreeding”; and “Priests fuck you up the asshole, but psychiatrists screw you between the ears.” He had a pretty paranoid, acutely developed understanding of a master race of which he seemed to be the only surviving member. He was sure he was being persecuted by an alliance of Irish Americans and psychiatrists.