Murder by Appointment: Inspector Faro No.10 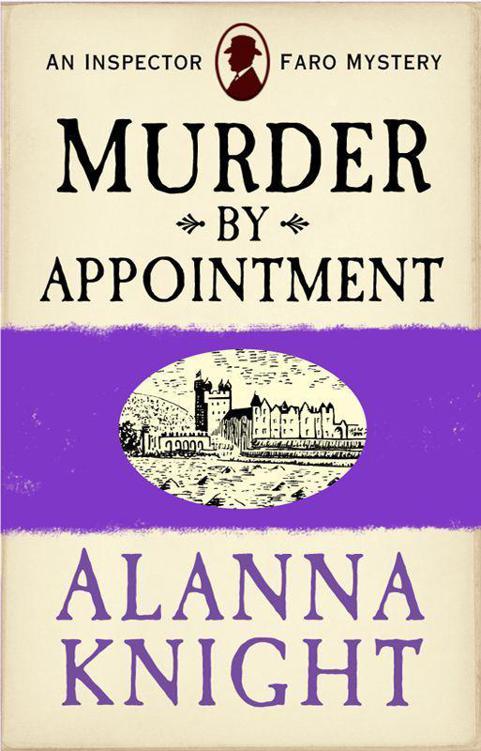 ALANNA KNIGHT
has written more than fifty novels, (including fifteen in the successful Inspector Faro series), four works of non-fiction, numerous short stories and two plays since the publication of her first book in 1969. Born and educated in Tyneside, she now lives in Edinburgh. She is a founding member of the Scottish Association of Writers and Honorary President of the Edinburgh Writers’ Club.

Detective Inspector Faro extracted himself with difficulty from the crowd of Edinburgh concertgoers leaving the Assembly Rooms that evening.

His air of preoccupation had less to do with the splendid rendering of the Beethoven sonatas he had just heard, than with the identity of their performer, Lachlan Brown, the talented young Highlander who had sprung to fame and international acclaim during the last three years.

Still deep in thought Faro negotiated Princes Street with its thin line of carriages, some carrying prosperous families homeward, some with curtained windows discreetly drawn against the curious. The occupants he guessed would be heading towards Leith Row's notorious howffs where their night's entertainment and revelry was about to begin. Other carriages were driven at reckless pace by arrogant young students with too much wealth and too few manners, as they hurled abuse at those pedestrians who tried in vain to cross the busy thoroughfare.

Stepping aside in the nick of time, Faro regarded his
narrow escape in disgust. He would have liked to snatch down
some of those grinning youngsters and give them a good shaking. However, dignity prevailed. Decorum must be maintained by senior policemen.

Vaguely declining the offer of a lift from one of his stepson's
medical colleagues, he headed up the Mound and away from the main traffic, walked rapidly homeward in the direction of
Newington.

At last his pace slowed and, taking stock of his surroundings,
he sighed deeply. Late spring with its burgeoning of new life
in every garden and hedgerow was his favourite season.

The evening was perfect with the promise of longer sunny days in store and, as he climbed the hill, moonlight outlined the castle far above him touching its windows with uneasy life, as if Queen Mary and those sad apparitions of her short and tragic reign still stalked its corridors.

But it was the spectre of a time nearer to his own that haunted Faro. For once his thoughts had nothing to do with crimes, ancient or modern. Guilt perhaps, but definitely not crime as the Edinburgh City Police understood it.

As he walked his footsteps echoed the final chords and the
rapturous applause of Lachlan Brown's recital, the two encores before the audience would release him.

Faro had observed it all closely from the most expensive
seats. A vantage point from which not only the piano and the pianist's hands were clearly visible but, what concerned him
more, the young man's face. The young Highlander had
outstanding good looks, black hair, olive skin, full mouth and
wide dark eyes. And listening to the brilliant performance Faro
continually scanned that countenance, minutely searching for
some resemblance to a well-known face, other than the one he had last glimpsed in Ballater several years earlier.

He remembered the rumours concerning Lachlan Brown. In addition to undeniable talent, his spectacular rise to fame
was the hint that he was 'an intimate relative of John Brown,
the Queen's favourite ghillie and protector'. The bolder ones took it further, with hints that Brown was Her Majesty's unofficial husband whose public acknowledgement would sweep her from the throne and that Lachlan was Brown's illegitimate son from a youthful indiscretion the Queen was prepared to overlook.

Faro knew that to be untrue. He had it from the lips of the boy's mother. Lachlan's paternity might be in doubt but John Brown was definitely not his father.

He had almost reached the top of the Mound when, with the suddenness that characterised Edinburgh weather, the moon was obliterated by fast-moving clouds.

'Stepfather!' The brougham stopped by him and Dr Vince Laurie leaned out. 'Jump in!'

Olivia, Vince's wife, looked pleased as she made room for
him. 'We usually go via the Pleasance, but we've just set down
brother Owen in Heriot Row. He's staying with friends —'

'I do really enjoy the walk, my dear,' Faro protested weakly.

How to explain that the evening solitude of quiet streets was his favourite time of the day and walking was his own
special way of solving problems, criminal or personal, or that
a wealth of experience had produced nothing better for clearing the head than a brisk Edinburgh wind.

'Are you sure?' said Olivia anxiously, regarding the sky. 'It's
going to rain.'

In two years of marriage, the young woman, who never
took a step in town if it could be avoided or a carriage was at
hand, continued to be baffled by her stepfather-in-law's eccentricities.

'And why a policeman who walks considerable distances each day in pursuit of criminals can possibly claim to enjoy
walking for pleasure is quite beyond me,' she told Vince on frequent occasions.

Vince, however, understood a great deal about his stepfather that his wife had yet to learn.

Now he turned to her and laughed. 'Give up, Livvy, do. You'll never persuade him.'

Faro glanced at the sky above and shook his head. 'Not unless the heavens open, and I don't really think that is very likely.'

'Be it on your own head, Stepfather!' said Vince, knowing he would never be able to convince dear Livvy about Faro's
preference for going to concerts alone when she, fearing that he might be lonely, anxiously begged him to join their group
of friends. Useless to try to explain without giving offence
that he wished to enjoy and appreciate the music with single—
minded devotion. And without the polite distractions offered
by the frequent passage of boxes of chocolate and opera-
glasses. Olivia on the other hand regarded such interruptions
as a necessary part of an amiable social occasion.

Saluting the departing carriage, Faro followed in its wake.
Quickening his pace, absorbed by his thoughts, he was hardly
aware that gentle moonlight had been replaced by swift-moving storm clouds.

'Damnation!' he exclaimed as the first heavy raindrops splashed down and, diving for shelter into the nearest door
way, he watched helplessly as the cloudburst filled the gutters
to overflowing, a channel of water soon flowing past him.

At last the sound he most wanted to hear. An approaching
vehicle! From the direction of the Mound, the familiar shape
of an Edinburgh hiring carriage had him leaping out of his sheltering doorway.

Signalling it to stop and thankfully about to climb aboard, he heard the sound of footsteps behind him.

A breathless voice sobbed out, 'Help me, sir. I implore you,
please help me.'

Turning, he saw a middle-aged woman, shabbily clad. Her cloak and bonnet were dripping wet and she carried neither umbrella nor reticule. As she spoke, she held out trembling hands to him.

Cursing his ill luck at being faced with the predicament of someone with a need obviously greater than his own, he gallantly stepped aside and with a bow murmured, 'By all means, madam—'

But instead of accepting his offer and stepping into the carriage, she shook her head violently and clutched at his arm.

'Please sir—I beg you. I’m in terrible danger—' And, pausing to glance over her shoulder, 'Please, try to understand. Those men—they're going to kill me—'

Faro followed her pointing finger, squinting against the driving rain. He could see no one, but the poor woman was clearly overwrought. He decided to humour her.

'Thank you, sir, oh, thank you. God bless you, sir.' The accent was familiar and brought a fleeting sense of recognition.

As he leaned forward to help her into the carriage, two shadows emerged from the darkness. Two large heavy male shadows, breathing deeply as if they had run a considerable distance in search of their quarry.

Faro's position with one hand assisting the woman up the step into the carriage and his back towards the two men, put
him at a considerable disadvantage. The arm he thrust out was an instinctive movement, completely ineffectual to fend off the stout stick raised high in the air above him.

As he heard the agonizing crack that splintered the night
into sickening blackness, his last thoughts were: 'Now I'll
never know the truth about Lachlan Brown.'

A nauseous headache told him that he was still alive.

He could take dubious comfort from that but was considerably surprised to find himself in his own bedroom in 9 Sheridan Place. His first thought was that the incident on the Mound had been one of the violent nightmares to which he was prone, paying dearly for something carelessly eaten that disagreed with his faulty digestion.

The pain as he moved and touched the bandage about his head told him otherwise.

A movement at the window indicated Vince hovering near by.

'So you're awake. Thank God for that. I thought you might be heavily concussed.'

When Faro groaned, Vince continued cheerfully, 'I should know something of the thickness of your skull by now. It's saved you many a time when lesser mortals would have met with certain death. I suppose it's that old Viking stock you have to thank—'

Vince smiled wanly. Well, I was rather hoping you could give me the answer to that.'

'I was attacked. I fell for the oldest trick in the book, lad. A woman in distress pleading with me while her confederates crept up from behind.'

Vince looked at him quickly. Not like you to be fooled by that one, Stepfather.'

'I thought I'd seen her somewhere before. That was what foxed me.'

Vince was aware of his stepfather's remarkable memory for
faces. 'And had you?'

'Aye, back in the mists of time, the devil knows where.'

But that was not the only reason, he thought If my mind
hadn't been wrestling with Lachlan Brown's identity, my wits
would have been sharper. And none of this would have happened.

As they were speaking the hall clock struck midnight.

Dana's Valley by Janette Oke
Gypsy Lady by Shirlee Busbee
PleasuringtheProfessor by Angela Claire
Wolf's Haven by Ambrielle Kirk
Behind the Seams by Betty Hechtman
Children Of Fiends by C. Chase Harwood
The Expected One by Kathleen McGowan
04 - Born to be Wilde.txt by Born to be Wilde.txt
Trust Me, I'm Lying: Confessions of a Media Manipulator by Ryan Holiday
The Waltzing Widow by Gayle Buck
Our partner