Read Murder in the Marais Online

Murder in the Marais 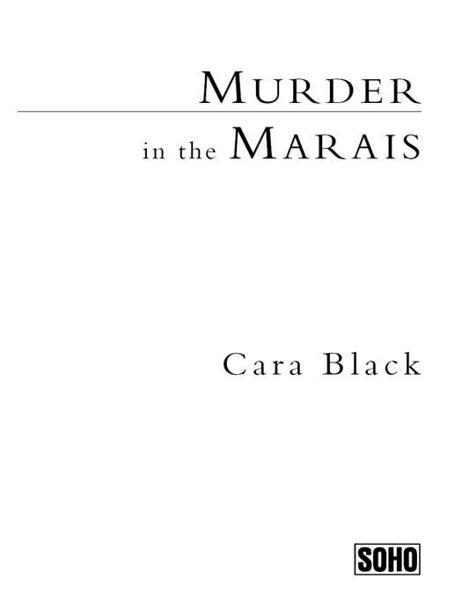 Dedicated to the 'real' Sarah and all the ghosts, past and present

My thanks go to all who inspired and supported this endeavor: from the beginning Nina, Jean and the Saturday group, James N. Frey without whom, the B's, Alice, Isabelle, resources of the Holocaust Center of Northern California, the work of Serge Klarsfeld, Ange who said 'why not', the wonderful Noe Valley librarians, L, Le Centre de Documentation Juive in Paris for all their help, Gabrielle, Madeline Dieudonne et Julia Curtet, agents de recherche privee in Paris for their generosity, Denise Schwarzbach who opened her heart and shared. My heartfelt thanks go to Melanie Fleishman—who kept an eye on the small details and saw the big picture, my son Shuchan who let me and Jun, who said it would happen. 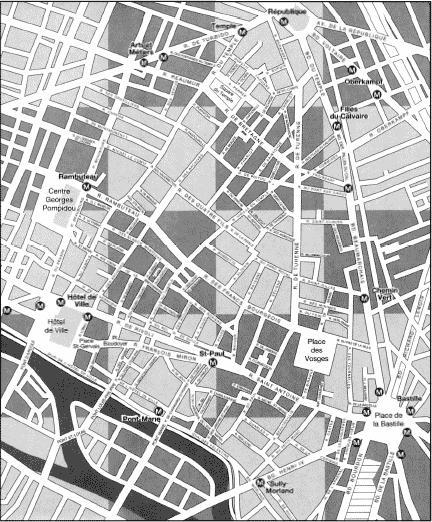 A
IMÉE
L
EDUC FELT HIS
presence before she saw him. As if ghosts floated in his wake in the once elegant hall. She paused, pulling her black leather jacket closer against the Parisian winter morning slicing through her building, and reached for her keys. The man emerged from the shadows by her frosted paned office door. A baby's cry wafted up from the floor below, then the concierge's door slammed.

"Mademoiselle, I need your help," he said. Leathery, freckled skin stretched over his skull and his ears pointed out at right angles. He wore a crumpled navy blue suit and leaned crookedly on a malacca cane.

"No missing persons, Monsieur," she said. As winter settled, the days gray and the memories vivid, old survivors revived hopes of lost ones. She slid her tongue across her teeth to check for anything stuck, smoothed her short brown hair and smiled. She stuffed the chocolate croissant back in the bag. "I don't find lost relatives. My field is corporate security." Thirty-four years old, Aimee, at five feet eight inches, loomed above him. "
Je suis desolee,
Monsieur, but computer forensics are my speciality."

"That's what I want." He straightened his posture slowly, his large eyes fearful. "My name is Soli Hecht. I must talk with you."

Behind his fear she saw sadness tinged by keen perception. She tried to be polite. Walk-in clients were rare. Most came through corporate connections or by word of mouth. "It's not that I don't want your business, but we're carrying a full caseload. I can refer you to someone very good."

"I knew your father, an honorable man. He told me to come to you if I needed help."

Startled, she dropped her keys and looked away. "But my father was killed five years ago."

"As always, he is in my prayers." Hecht bowed his head. When he looked up, his eyes bored into hers. "Your father and I met when he was in Le Commissariat."

She knew she had to hear him out. Still she hesitated. The cold seeped from the floorboards but it wasn't the only thing making her shiver.

She unlocked the door that read
LEDUC DETECTIVE
that led to the office she'd taken over after her father's death, flipped on the lights, and draped her jacket over her armchair. Nineteenth-century sepia prints of Egyptian excavations hung on the walls above digitally enhanced Parisian sewer maps.

Hecht moved his cadaverous frame across the parquet floor. Something about him struck her as familiar. As he lifted his arm onto her desk, she saw faint blue numbers tattooed on his forearm peeking out from his jacket sleeve. Did he want her to find Nazi loot in numbered Swiss bank accounts? She scooped ground coffee into the filter, poured water, and switched on the espresso machine, which grumbled to life.

"Specifically, Monsieur Hecht, what is the job?"

"Computer penetration is your field." His eyes scanned the equipment lining the walls. He thrust a folder at her. "Decipher this computer code. The Temple E'manuel is hiring you."

"We need proof that a woman's relatives avoided deportation to Buchenwald. But I don't want to raise her hopes." He looked away, as if there was more he could say, but didn't.

"I've stopped doing that kind of work, Monsieur Hecht. That was more my father's field. To be honest, if I kept his promise you'd get less than the best."

"I knew your father, I trusted him." Hecht gripped the edge of her desk.

"A man of honor, he told me I could rely on you." Soli Hecht hung his head. "We had many dealings before the explosion. I need your expertise."

She drummed her chipped red nails on her desk and pushed the painful memories aside. Steaming muddy liquid dripped into the waiting demitasse cup. "Monsieur,
un petit cafe?
"

Aimee unwrapped a sugar cube and plopped it in her cup. "I do computer security," she repeated. "Not missing persons."

"He said you would help me. . .that I could always come to you."

Short of going back on her father's word, one path remained.
"D'accord,"
she relented with inner misgivings. "I'll show you my standard contract form."

"My word must be enough." He extended his hand. "As far as you are concerned, you don't know me. Agreed?"

She shook his gnarled hand.

"This will take several days? I was told it could be slow work."

"Maybe a few hours. I type one hundred and twenty conventional words a minute."

She smiled and sat down, shoved last night's faxes to the side of her desk, and leaned towards him.

"You were in school in America when I knew your father."

Full of hope, she'd searched for her American roots and the mother who'd disappeared when she was eight. She hadn't found either. "Briefly. I was an exchange student in New York."

"Your father articulated his casework philosophy to me and I've always remembered it."

"Things weren't usually what they seemed or he'd be out of business?"

Hecht nodded. "You're independent, no ties or affiliations to anyone." His crooked fist drummed the table. "I like that about you."

He knew a lot about her. She also had the distinct impression he was leaving something out. "Our fees are seven hundred and fifty francs a day."

"Look inside the folder," Hecht said.

Aimee opened his file, noticing the digits and slash marks, a distinctive trademark of Israeli military encryption. Her expertise was in hacking into systems, huge corporate ones. But this code spoke of the Cold War—a slippery tunneling job. She hesitated.

"Two thousand francs are in the folder. Deliver your results to 64 rue des Rosiers to Lili Stein. She's home after her shop closes. I've told her to expect a visitor."

Aimee felt she had to be honest; breaking an encrypted code had never taken her that long. "You've given me too much."

He shook his head. "Take it. She has a hard time getting around. Remember, give this only to Lili Stein."

She shrugged. "No problem."

"You must put this in Lili Stein's hands." Hecht's tone had changed, from fervent to pleading. "Swear to me on your father's grave. On his honor." His eyes locked on to hers.

What kind of Holocaust secret was this? Slowly she nodded in agreement.

Soli Hecht's joints cracked as he rose. His face wrinkled in pain.

"You could have faxed me this query, Monsieur Hecht. It would have saved you this trip."

"But we've neither talked nor met, Mademoiselle Leduc," he said.

Aimee bit back her reply and opened the door for him. Warped floorboards, a tarnished mirror, and scuffed plaster adorned the unheated landing. She buzzed for the turn-of-the-century wire elevator grating noisily up the shaft. Slowly and painfully he made his way to the hall.

Back in her office, she stuffed the francs into her pocket. The overdue France Telecom bill and horse meat for Miles Davis—pronounced Meels Daveez—her bichon frise puppy, would wait until she'd done the promised work.

Eurocom, the cable giant, had royally screwed up her finances by breaking Leduc's security service contract and hiring a rival Seattle firm, the only other firm that did the same work as she and her partner. She hoped there'd be enough money left to spring her suits from the dry cleaner's.

Her standard software keys enabled her to crack coded encryptions. They opened information stored in a database, in this case, she figured, a military one.

After punching in her standard key, "Access denied" flashed on the screen. She tried another software key, Reseau Militaire, an obscure military network. Still the screen flashed "Access denied." Intrigued, she tried various other keys but got nowhere.

After several hours she realized she would earn her francs on this one. So far, nothing worked.