Murder on the Eightfold Path 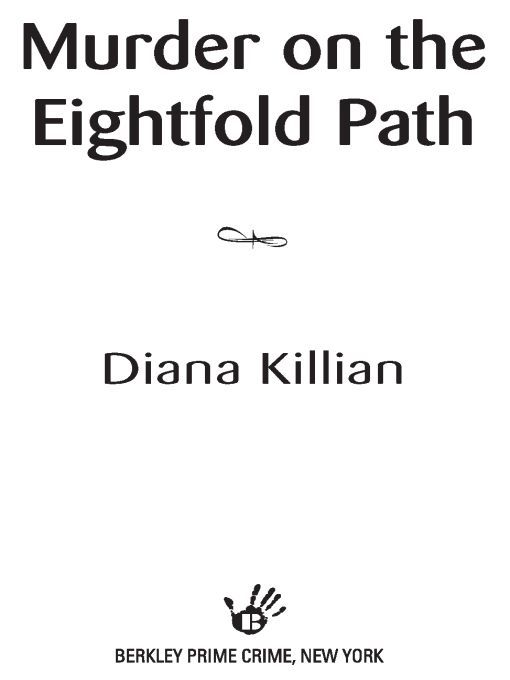 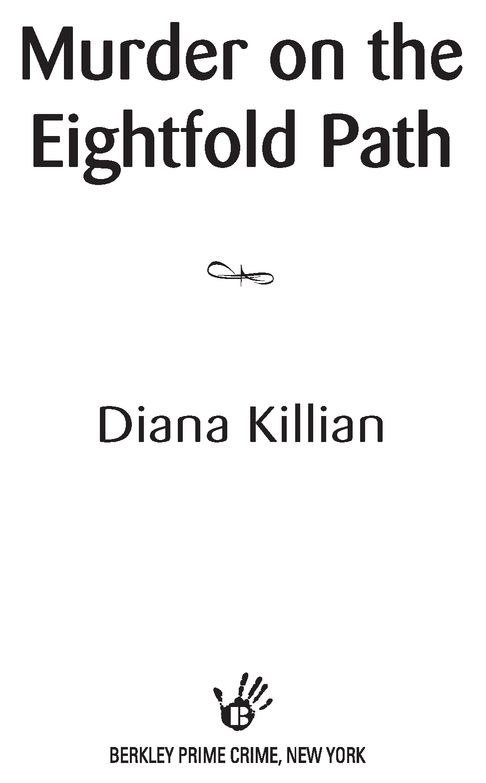 The
man in the mohair coat lay facedown on the cobble-stone path, one arm outstretched, fingers grazing the handle of the pink woven basket that had fallen on its side. Scattered on the grass, little foil-wrapped eggs glinted in the morning sun.
It was a very nice mohair coat. Camel-colored cashmere, probably Armani—but the bloody bullet hole in the center of it did nothing for the tailoring.
It did nothing for A.J. Alexander’s nerves either—as though family holidays weren’t trying enough. Nothing says
Happy Easter!
like murder. For a moment she stood perfectly still in her mother’s front garden with the scent of roses and death wafting gently on the spring breeze, and tried to convince herself that she was hallucinating. Too much cream cheese on her bagel, too much Irish in her coffee. There could
not
be a dead body in her mother’s garden on Easter morning. It just wasn’t . . .
Monster, A.J.’s golden Lab, waddled forward to sniff the utterly motionless form, nudging the still hand with his wet nose, and then—before a horrified A.J. could stop him—picking up a pastel-colored hard-boiled egg in his mouth and crunching it, shell and all.
“
Monster!
” A.J. shrieked.
Ears flattening, he gave her a guilty look—and continued crunching.
A.J. jumped forward. Her foot slid on wet grass and yet another hard-boiled egg, and she slipped, twisting her back as she hit the ground. The pain was shocking. For an instant she lay there stunned, blinking up at the azure sky. Birds were singing cheerfully, flowers bobbed overhead—and Monster loomed into view with little bits of colored eggshell on his muzzle.
As A.J. opened her mouth to yell for help, Monster slopped her face with his rough, wet tongue. She waved him away, biting back a cry at the bolt of fire blazing down her spine. It had been over a year since she’d had any back trouble thanks to her new fitness regime, which included yoga morning and night. But even before her aborted attempt to push up, she knew it was going to be a while before she was doing anything more strenuous than Corpse Pose. Speaking of which—A.J. shuddered and turned her gaze away from the thing lying a few feet away.
She groped for her bag, shoving Monster away as he anxiously snuffled her face and hair. Finding her cell phone in her fallen bag, she dialed, her gaze returning to the body on the path. She could see now that blood was pooled on the stones beneath the man’s body. She swallowed hard.
Inside the house the phone began to shrill. A.J. could hear it ringing and ringing. No one picked up. A.J.’s tautly strung nerves ratcheted up a notch. Her mother was occasionally oblivious to those around her, but no one could be oblivious to gunshots outside the front door.
So where was she? She had a house full of people coming and . . . going. This sudden absence made no sense.
Unless the killer had used a silencer? A.J. instinctively rejected this notion as too James Bondian, but . . . was it any harder to believe than the fact that a man had been killed in Elysia Alexander’s garden?
A.J. disconnected and dialed Jake. Detective Jake Oberlin of the Stillbrook Police Department was A.J.’s current beau—in fact they had just said good-bye forty-five minutes earlier. He was scheduled to work that day, although no one was anticipating holiday homicide—and certainly not homicide hitting this close to home.
Jake answered his phone on the second ring.
“Hey,” he said. And despite the terseness of it, A.J. could hear a certain warmth that, probably due to her current predicament, closed her throat with emotion.
“It’s me,” she got out. “Something terrible has happened. There’s a dead body in mother’s front yard.”
The silence was filled with a windy blankness that indicated Jake was on the road, driving. “You’re not kidding, are you?” he said finally.
“No. I’m not kidding. Mother’s not here. I slipped and fell—”
I’ve fallen and I can’t get up!
Suddenly those corny old commercials weren’t so funny.
Jake said grimly, “Are you sure your mother’s not there?”
She wasn’t—and the realization terrified her. “She didn’t answer her phone. Jake, it looks like this guy was shot.”
“Are you in a secure location?”
“I’m lying in the middle of the path to the front door. I can’t get up!”
“All right. Stay calm. I’m sending help.” She heard him speaking away from the phone, his faraway voice crisp as he gave orders over his radio. Then he was back on the phone with her. “This guy, this body—do you recognize him?”
A.J. painfully lifted her head. Monster had scooped up yet another colored egg and was chomping away with that guilty but determined expression. She groaned. “Monster,
no.
Bad dog!”
“What is it?” Jake’s tinny voice demanded from her cell.
“Monster is eating the evidence!”
“What?”
Perhaps that sounded a little more dire than she intended. “He—the victim—was carrying an Easter basket. Monster is eating the goodies.”

Cheyenne Challenge by William W. Johnstone
The Vanishing by John Connor
Resistance by Allana Kephart, Melissa Simmons
The One Who Got Away: A Novel by Bethany Bloom
My Name Is Not Alexander by Jennifer Fosberry
The House On Willow Street by Cathy Kelly
The Truth of the Matter by John Lutz
Jack Daniels Six Pack by J. A. Konrath
Final Assault by Kristine Kathryn Rusch, Dean Wesley Smith
Undisputed Truth: My Autobiography by Tyson, Mike
Our partner