Read Murder on the Thirteenth Online

Murder on the Thirteenth 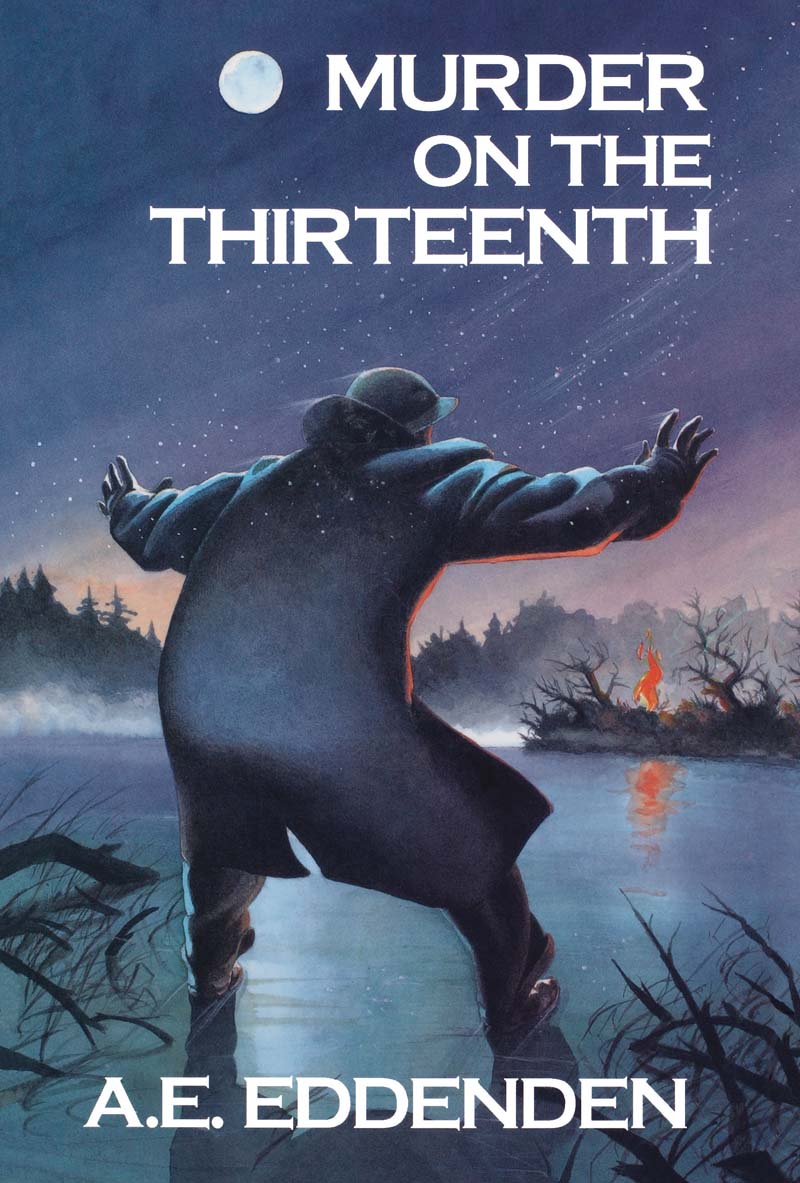 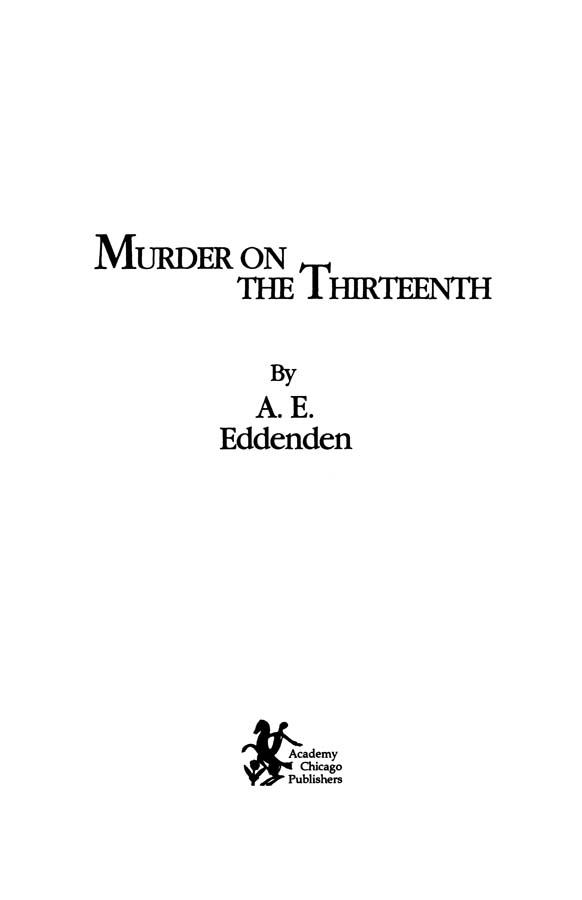 Also by A. E. Eddenden

A Good Year for Murder 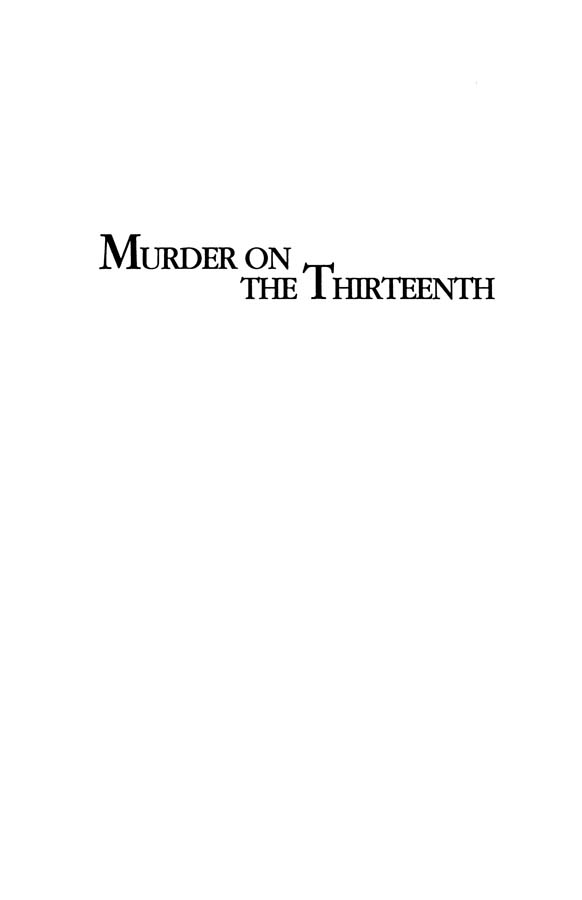 Printed and bound in the USA by the Haddon Craftsmen

No part of this book may be reproduced in any
form without the express written permission
of the publisher.

Murder on the thirteenth / A.E. Eddenden. 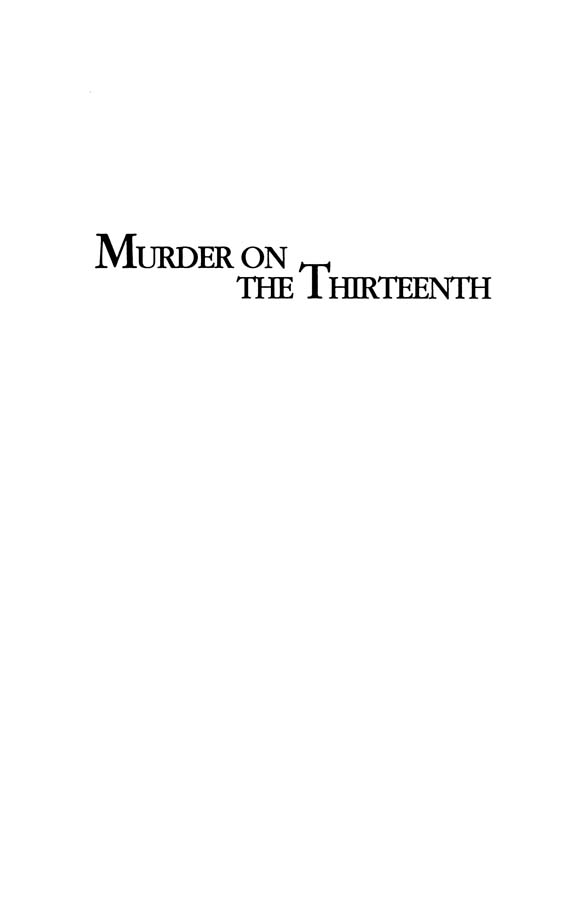 O
n January 13, 1943, the biggest and most complete blackout in the history of North America took place. At precisely 9:00 p.m. the sirens wailed. The citizens of Fort York turned their lights out. They were joined by two and a half million other persons in Southern Ontario and areas in the states of New York, Ohio and Pennsylvania in an international wartime test. Despite inadequate alarm systems and the element of surprise, the mock air raid went off well. Most people co-operated.

After all, there was a war on. The west coast, authorities said, lived in fear of a Japanese invasion. Numerous confirmed German U-boat sightings had been made on the Atlantic side of the continent from Newfoundland to Florida.

Yet there were those lulled by the smug complacency of living as far inland as the Great Lakes who didn't take the matter seriously. Specifically, they left their lights on. Tonight they would answer to the vigilant.

Jake turned the car roughly, making fresh tracks in the snow-covered street toward the offending light. He braked sharply. Tretheway rolled his window down and the two
glared at the unsuspecting, well-lit living room.

Jake grumbled under his breath but left the warmth of the car. The unshovelled snow crunched under his feet as he jumped up the verandah steps. He knocked on the frost-covered storm door and waited. Looking back, Jake could see the pulsating red glow of his boss's cigar hovering dangerously close to the cloth roof of his beloved convertible. Tretheway's shadowy bulk seemed to fill the whole of the car's interior.

The moon eased out from under the clouds to throw undulating shadows of evergreens and telephone poles across the snowdrifts. A whirling breeze blew snow-flakes up and around the tree trunks and bushes. One lone walker, clutching a fedora to his head, pushed his unbuckled galoshes across the quiet night scene. Most people stayed inside because of the blackout. The unnaturally darkened homes looked deserted.

The inside door opened. “Yes?” The man's muffled shout came through the glass of the storm door.

“Warden Small.” Jake touched the brim of his dishpan-shaped steel helmet with his right finger. “Your light is showing.”

“Eh?” the man shouted back.

The glass was beginning to fog up. Jake could make out the blurred figure of a middle-aged man in his undershirt cupping his hand around his ear. The man opened the door. Heat poured from the foyer. The sound of ABC Radio's “Gang Busters” clashed with the cold outside air. A dog barked.

“Your light's on,” Jake shouted.

“Who is it, Harvey?” A woman's voice called from inside.
“I'm sorry, “Jake persisted. “I'm an Air Raid Warden.” He pointed his flashlight at the large, hand-painted âW' on the front of his helmet. “You'll have to turn your light out. It's a blackout. Didn't you hear the sirens?”

“No,” Jake explained. “It's just a practice. A pretend bombing.”

“Then let's pretend I've turned the lights out.” The man smiled at his own wit.

“Good one, Harvey,” the woman said.

“How do you feel about a summons?”

Jake turned toward the voice. The man and woman peered around Jake. At the bottom of the verandah steps Tretheway stood, feet apart, in his police issue, size 13 boots. He shone his five cell flashlight on his front so there could be no question of identification. His oversize, navy blue greatcoat, with the gold insignia of an FYPD Senior Officer, hung open to reveal a casual, bright red sweatshirt with the official crested message, â1941 INDIVIDUAL CHAMPION TORONTO POLICE GAMES'. The upward beam of light gave his scowling face an eerie appearance. Because of his height (6â²5â³) and his weight (280 lbs.) his helmet looked a lot smaller than Jake's. Jake wondered where the cigar had gone.

Jake turned back to the couple.

“I'll get that light.” The man disappeared inside.

“When can we turn it back on?” The woman asked.

“There'll be an all clear siren, Ma'am,” Jake had memorized the ARP manual. “A continuous signal at a steady pitch.”

The door closed. Jake heard the dog yelp and stop barking. The light went out.

They were back in Jake's car resuming their ARP patrol in the traditionally quiet west end of the city.

“Let's get down to the office,” Tretheway said.

“Right.” Jake pointed the long nose of the Pontiac downtown.

In 1941, Tretheway was, in effect, lent to the war effort by the Fort York Police Department. Jake, or really, Jonathan Small, Constable 1st Class, went with Tretheway as his able driver and assistant under the same plan. As Regional Officer, Tretheway had no particular sector, but was responsible for the ARP function of the whole city. The police, fire and other emergency vehicles patrolled the industrial and commercial sections of town. They were assisted by the Royal Fort York light Infantry (Reserve).

Tretheway and Jake shared a downtown office on the ground floor of the Fort York Arms with Geoffrey Beezul, another full-time employee ($ 1 a year man) of the wartime office. Beezul was old family Fort York. He was affable, bit of a name dropper, member of the right clubs, handsome in a coiffured, Nelson Eddy sort of way, but had an annoying habit of hitching his expensive, ill-fitting pants up every few moments.

Thin, wet-eyed ZoÃ« Plunkitt, commandeered from the Genealogical section of the FY Public Library, rounded out their group as a part-time secretary. She blinked constantly. The rest of Tretheway's force, mostly Air Raid Wardens, were made up of civilian volunteers.

Jake nudged the car into a snow bank beside the “No Parking/Taxi Stand” sign at the entrance to the Fort York Arms. He stepped carefully out of the car into ruts made in the snow. Tretheway stepped into the snow bank and felt the snow trickle over the tip of his ankle-high boots. He looked at Jake. Jake shrugged an apology.

A whistle sounded. Luke Dimson strutted, as only a short person can strut, toward them. He handled the job of doorman reasonably well, but with his limited attention span, often wandered from his post. For the last few years, Luke had whistled for taxis and willingly handled cumbersome steamer trunks as easily as if they were loaves of bread. A thick shock of auburn hair pushed out from under the decorated visor of his military-style cap to almost touch his black eyebrows, which met in one furry horizontal bar. Luke's eyes were set much too close to his stubby, slightly twisted nose. His uniform was always clean, his gloves spotless and his whistle shiny but overused; like now.

The whistle sounded again. Luke spat it out, knowing the painstakingly-whitened lanyard around his neck would stop its fall. “You can't park there,” he began, then recognized Tretheway and Jake. “Hi, Jake. Didn't know it was you.”

“I'll watch the car for you, Inspector.” Luke touched his cap.

The lights shone brightly in the office but the blackout curtains shielded them from the street. It was a long, thin office that had been a fashionable shoe store before the war. The front door opened off the same wide sidewalk as the hotel's covered entrance. Three desks stood in a row. The first, with its vase of dried herbs, implied a receptionist or secretary. Geoffrey Beezul's came next, then Tretheway's, the biggest desk of all. On the back wall next to the rear door, Jake sat, when necessary, at a large utility table. Running along the wall opposite the desks, rows of open
cubicles held the tools of the ARP trade; neatly piled gas alarms, flashlights and batteries, boxes of whistles, hand bells, knapsacks, binoculars, steel helmets, gas masks and many, many information booklets. Several stirrup pumps stood in one corner. A faint, not unpleasant, odor of leather still hung in the air.

Geoffrey Beezul was standing at his desk when they arrived. His coat, helmet and flashlight lay on his desk.

“Tretheway. Jake.” Beezul hitched up his pants. His alert blue eyes flashed between them, he looked younger than his forty years. “Sort of exciting out there.”

Tretheway looked at both of them. “I hope the Luftwaffe will be as understanding as you two in a real air raid.”