Read Wizard's Heir (A Bard Without a Star, Book 1) Online

Wizard's Heir (A Bard Without a Star, Book 1) 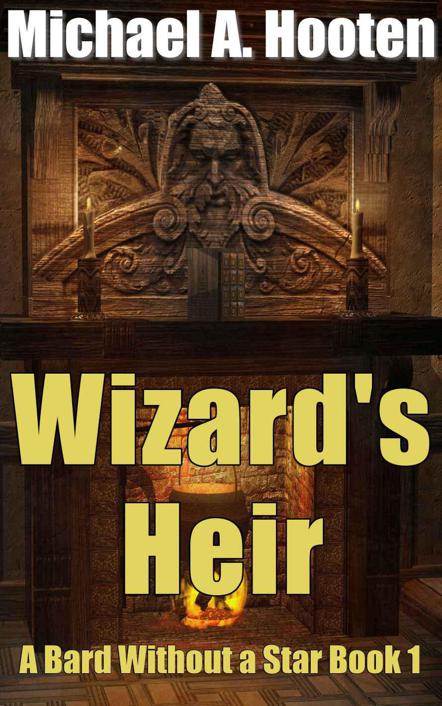 A Bard Without a Star
Book 1

by Michael A. Hooten

For my wife Kristin, who
is the most magical person I know

Other books by Michael A. Hooten, available from
Amazon.com
:

Book
1:
The Cricket Learns to
Sing

Book2:
A Cricket at Court

Book
3:
The Cricket That Roared

Math ap Mathonwy sat upon his tower throne at Caer Dathyl,
stroking his long white beard absently. Every now and then he glanced at
Goewin, the beautiful girl who held his feet, who smiled back at him warmly. A
twinkle appeared in his eyes, but nothing else changed. Wide windows, arched
and open to the air, surrounded him, and the wind whistled through the chamber,
coming from all over the country of Glencairck and beyond.

They said he could see men’s
souls, or that he could hear their very thoughts. Some called him evil, but
some called him benevolent. Some said he was possessed by a demon, but most
others whispered about the magic of his Cymry blood. The people of Glencairck
said many things about the lord of Gwynedd, but very few said them to his
face. Math heard most of it anyway, brought to him by the wind.

In a lower chamber of the Caer,
Gwydion ap Don plucked a slow, seductive song from the strings of his harp with
long fingers. Although the early morning sun shone brightly outside, the room
was windowless; candles caught highlights from his long chestnut hair, and cast
soft shadows around his handsome face.

He could feel the song
vibrating around him, full of power and possibility, although Lanali, the young
girl who was his only audience, seemed unaware of it. He lowered his voice,
and the candles dimmed slowly, almost imperceptibly. The girl sighed once, her
face relaxed and open, and Gwydion brought his song to a close.

“That was wonderful,” she
said. “You are very talented, my lord.”

“And you are very beautiful, my
lady,” he said with a bow.

She giggled at his compliment;
although the two colors in her cloak marked her as free, she hardly had the
rank to be called a lady. Gwydion laid his harp down and sat beside her.

She wagged a finger at him. “Don’t
be thinking that you can try anything with me, my lord,” she cautioned. “I’ve
heard stories about you.”

He feigned shock. “But I am
innocent and harmless, I swear.”

She looked at him
suspiciously. “I doubt that.”

“Those stories are just nasty
rumors designed to make my uncle doubt my abilities to succeed him. You know
that some people would rather see anyone as Lord of Caer Dathyl except me.”

“But everyone admires you.”

He gave a little shrug and
began stroking her honey blond hair. “Admiration is not the same thing as
love.”

“Well, I love you,” she said,
and kissed him lightly on the lips. He returned it passionately, making her
pull back. “Wait, please. I don’t think I’m ready for this.”

“Alright,” he said, sitting
back. He could feel the last echoes of the song, and changed them just a
little. “You’re not warm, are you?”

Almost unconsciously, she began
fanning her face. “I am a little.”

“You can take off your cloak,
if you like.”

“No one will interrupt us,” he
promised. “And it’s not like I’m asking you to take off your dress.”

She giggled nervously, but
stood and unfastened the brooch at her neck. He was surprised again at how his
heart raced from just the simple act of removing a cloak. It wasn’t as if it
revealed any more of her body; he had been able to see the simple dress she
wore beneath the mantle from the moment she walked in. He supposed it had to
do with the fact that it was the first step in the seduction, the first taste
of victory.

And she was lovely. Despite
her work worn hands, her face had caused more than one young man’s heart to
flip, but she held herself properly aloof from all advances until Gwydion began
seeing her. For two months she had resisted most anything but a kiss, but this
morning he felt confident in taking her completely.

He kissed the curve of her neck
when she sat back down. “You are indeed beautiful,” he murmured in her ear.

“Thank you,” she said with a
giggle that bordered on a throaty laugh.

Almost, he thought, moving
towards her ear.

A breeze blew under the door,
making the candles flicker and his head buzz. “What’s wrong?” Lanali asked,
and Gwydion realized he had pulled away from her.

“Nothing, my love,” he said,
trying to ignore the growing discomfort. He tried to kiss her again, but his
mouth had gone dry, and he started coughing instead.

“No, I’m—” He stopped, momentarily
stunned when the buzzing became words.

Eyes full of wonder, Gwydion
said, “I have to go.”

“When I can, sweetheart. I
promise.”

Gwydion hurried out of the room
and up towards Math’s tower. Something in his face made people get out of his
way quickly, and he climbed the tower stairs two at a time.

Math did not even blink when he
burst into the room, although Goewin jumped. “Welcome,” the old man said
gravely.

“You called me,” Gwydion said,
breathing hard. “I heard you call me.”

“You are out of breath. Take a
moment and compose yourself.”

“It’s nothing,” the boy
answered, although he began straightening his tunic. “What I want to know is
how I heard you.”

“Patience, lad, patience.”
Math indicated a side table. “Get yourself something to drink, and catch your
breath.”

Gwydion wanted to say more, but
he abruptly shut his mouth and marched over to the table against the wall and
poured himself a glass of water. He drank it quickly, poured himself another,
and turned back to Math. “I want to know what’s going on.”

Math steepled his fingers. “You
know, I have lived a very long time,” he said.

Gwydion forced himself to
answer calmly. “I believe it’s close to two hundred years, isn’t it?”

“A bit longer, actually. I
have watched my family grow old and die, and their children as well. You are
of the line of Don, my beloved sister, as is Gilventhy, but your grandparents
were one of her grandchildren. And in all those generations, I have never
designated an heir. Do you know why?”

He wanted to make a sarcastic
comment, but instead he simply said, “No. Why?”

“Because I never found someone
who was capable of using my power.”

“But you have said you wanted
me to be heir.”

“I have wanted many people to
be my heir. But none have been talented enough.”

Gwydion began to get excited. “Until
today?”

“Until today.” Math’s
shoulders relaxed and he crossed his hands over his beard. “I sent a call on
the wind, and the wind knew your name and found you. But even more, you
understood. So tomorrow, in front of the entire Caer, we will make the
pronouncement.”

“You’re welcome, nephew. But I
must warn you.”

“Warn me about what?” the boy
said.

Math’s eyes grew dark. “Stories
are told of your liberties, especially with the young ladies. I will not ask
you whether or not they are true; I will simply tell you to stop.”

“But I—” At the look in his
uncle’s eyes, Gwydion stood a little straighter and said, “I don’t understand
why it’s such a crime. The priests preach against it, but I think that it’s a
perfectly natural thing for people my age to experiment with.”

“You are not truly natural,
nephew, as we have just discovered. And remember that despite my age, I was
young once, and felt the giddiness of lust. But the laws of the Creator are
fair and just and there are reasons for them even if we don’t understand them
all. In order to be the best leader you can, though, you must follow them more
closely than anyone.”

Gwydion thought about arguing,
but saw that his uncle wasn’t going to relent. “As you command,” he said. “I
will do my best.”

“Make sure that you do.”

When Gwydion left the tower, he
went down to the courtyards where the soldiers trained. Looking at the crowd
of young men and women hard at work in the dusty rings, he couldn’t spot the
face he was looking for. “Excuse me,” he said to a young kern taking a rest
nearby. “Have you seen Gilventhy ap Don?”

“Over there,” the man said,
pointing with his chin. “With the claymores.”

“I should have known. My
thanks.”

The kern just grunted, and
began rubbing the back of his neck.

Gwydion wandered over to where
two tall boys hacked at each other with four foot long swords wrapped in
wicker. Despite the sweat pouring off his face and back, the darker of the two
grinned; he swung his practice blade gracefully and soon defeated his opponent.

The other boy shook it and
said, “I don’t know how you do it, Gil. I’m worn out after five minutes with
these blasted claymores, but you’ve already fought six of us today.”

“And beaten you all,” Gilventhy
said easily. “It’s just practice.” He looked around at the other boys. “Any
other takers?”

Gwydion stepped forward. “Gil,
I need to talk to you.”

Grinning slyly, the tall boy
said, “Well, won’t this be interesting. Somebody throw my cousin a blade.”

“No wait!” Gwydion said. “I
didn’t mean—” Helpful hands removed his cloak and gave him a choice of wicker
wrapped swords. He cursed as he chose one, and hefted it in resignation. “Let’s
get this over with.”

Gilventhy clucked his tongue
disapprovingly. “You have to try, at least. I won’t have you giving up right
at the beginning.”

“No, you’ll just beat me black
and blue for a while.”

His cousin grinned fiercely and
swung his sword up with both hands. “Well, I have to have some fun, don’t I?”

Gilventhy made a casual swipe
that Gwydion managed to parry, although he could feel his teeth rattle. Sweat
rolled down his back as he tried just to hold his own, but his cousin’s skill
with the great swords was well known, and within moments Gwydion felt the sting
of metal backed wicker against his side.

“I concede,” he gasped, glad
that it was over.

“What? But you have to. A hit
like that with a sharp claymore would have split a man, even if he had been
wearing mail.”

Gilventhy grinned. “But you’re
still standing.” He swung the great sword easily, and knocked Gwydion off his
feet.

He landed flat on his back, and
the world went dark for a moment as the breath went out of him. The ringing in
his ears felt familiar, like a song that he almost remembered, but voices
intruded.

Love Is the Drug by K. E. Saxon
Dangerous Pursuit (The Protectors) by Daley, Margaret
At His Mercy by Tawny Taylor
Blood of My Blood by Barry Lyga
Cold Killers by Lee Weeks
Younger by Suzanne Munshower
Dawn Marie Hamilton - Highland Gardens by Just in Time for a Highland Christmas
Thicker Than Blood - The Complete Andrew Z. Thomas Trilogy by Crouch, Blake, Konrath, J.A., Kilborn, Jack
The Least Likely Bride by Jane Feather
A Lesson for the Cyclops by Jeffrey Getzin
Our partner