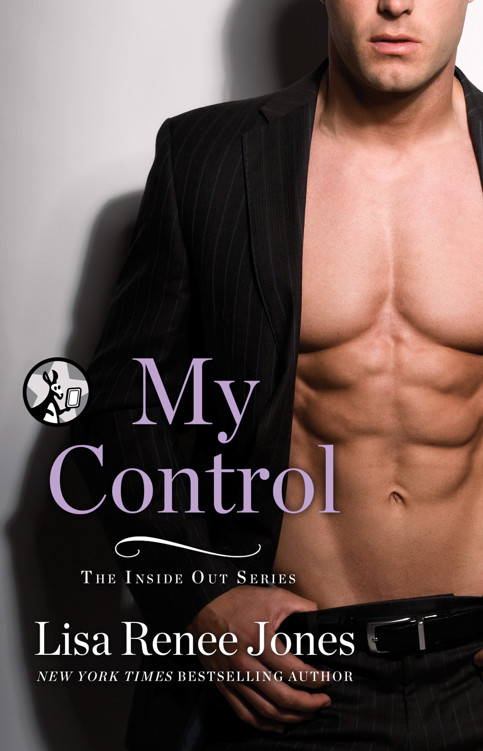 From
New York Times
bestselling author Lisa Renee Jones, an e-short that continues Mark and Crystal’s unexpected love story in the Inside Out series—told from Mark’s dark, controlling perspective.

I have lost who I used to be, letting guilt and heartache define who I am, letting darkness control me. Only one woman has seen what no one else has seen in me: the man I do not wish to exist. His lack of control led to tragedy, and I cannot allow that to happen again. But even as she offers ease, she challenges me like no woman ever has—and my hunger for her has driven me to the edge of sanity. But no more. She is about to find out that the Master has returned

The Inside Out Series by
Lisa Renee Jones

If I Were You

The Master Undone: An Inside Out Novella

Though you can read
My Control
as a stand-alone story, it is a part of Mark Compton’s story that has been slowly coming to light throughout the Inside Out series. The reading order I recommend for the three novellas in Mark’s point of view is as follows:

*
My Hunger
, which begins the day after
The Master Undone

*
My Control
, which leads into a full-length novel in Mark’s point of view, which is titled
I Belong To You

For those of you who have been following the series, I am beyond excited to finally be sharing the secrets beneath Mark’s surface with you. Finally, you will know what I have always known about “Mr. Compton.”

I hope you enjoy the journey and thank you for sharing it with me!

I stare down at the key that was left for me at the hotel’s front desk, reading the note.

My house is swarming with press. I’m in the room next to yours. We need to review the gallery’s business tonight. I’ll be in meetings all day tomorrow.

It’s not signed, but I know it’s from Mark. I wonder if he isn’t sure how to sign it. Mark. Mr. Compton. Master. Just the thought that he might have expectations of me as a submissive has me balling the note up and clenching it in my damp palm. But no—he doesn’t.

He’s caught in a nightmare, eaten alive with guilt over Rebecca and terrified for his mother. He’s not thinking about anything else at the moment, and I’ve just caught him in a few weak moments where I’ve been an escape. And that’s okay. He’s hot. Ridiculously sexy. And so damn arrogant he could win an award. The kind of man you sleep with and move on.

Only I can’t move on. His family has become my second family.

I can’t go into his room. I can’t end up naked with him again. It’s starting to affect me, beyond the fiery passion. He’s starting to get under my skin, and that’s dangerous. I am no submissive, and he’s all about power and control—truly a Master in all he does, in all he commands. Underneath that hardness, though, I’ve briefly seen a tender, sensitive man who has a sense of humor and a deep love for his family, his mother in particular.

So I can’t ignore his note. That would be turning my back on someone who needs me, in order to protect myself, and that’s not who I am. And this isn’t about me, anyway. It’s about the police on the beach searching for poor Rebecca tonight, and it’s about a broken man who doesn’t even know he’s broken. And it’s about his ailing mother, who I love dearly, and who desperately wants him by her side. Despite how much she wants Mark to be a part of the auction house, Riptide, she’ll never forgive herself if Allure gallery falls apart because he’s distracted by her illness. He says he wants me to shut it down and tie up all the loose ends.

But I need to do more. I need to save it. And not just for her—for him. For the man I’ve caught glimpses of, who has captured a part of me. The one who has let me see the wounds he’s denying, making him unable to heal. He’s alone inside his own personal hell, telling himself he can fight it alone. But he can’t. I know this with certainty.

Right or wrong, decision made, I leave my room and turn toward his. I’m going to fight with Mark, even though I’ll likely end up hurt and alone. But life is too short for regrets. Another fact that I know too well.

Sitting on my suite’s couch, I loosen my tie and refill my scotch glass before turning on the television. After flipping through several stations, I stop and turn up the volume at the sight of a newscaster standing on a beach with police cars—and pray like hell that he can tell me something that the expensive attorneys and investigators I’m paying haven’t been able to manage.

Authorities are staying quiet about what’s being searched for on Muir Beach, but we know it’s the stretch surrounding the family home of a male employee who works at Cup O’ Café, the coffee shop owned by Ava Perez. For those of you just tuning in, Ms. Perez confessed to killing Rebecca Mason, an employee of the gallery next door to the coffee shop, only to later retract that confession. Police are not saying what they are looking for and what outcome they hope for tonight, but a press conference is planned for Monday morning.

I mute the sound of the same story I’ve heard at least ten times. Downing the scotch, I set my glass down and refill it. Hell, why not? I’m spinning out of control; I might as well do it the fuck right. On the coffee table, my gaze catches the only one of Rebecca’s journals that I’ve managed to keep for myself.

I fight the urge to pick it up and start reading again; I know damn well that every word will be like salt in my open wounds. It’s that passage about her anger over her mother hiding her father’s identity from her that really slices deep. She’d tried to talk to me about it. I hadn’t let her. I’d shut her down to halt the emotions that she’d stirred in me that I didn’t want to feel.

But I’m feeling them now. I’m living every last, bitter one.

Lifting the glass to my lips, I stop at the knock on the door. Crystal is here—and it’s like a punch to the chest. She does things to me. The kinds of things Rebecca tried to do, and couldn’t. And not because I didn’t care about Rebecca, but because I was too removed from everything human inside of me. She woke me up, but it had been too late—and I wish like hell that I was the one dead now, not her.

Shoving the journal into the accordion file on the coffee table, I sink back against the couch, my glass settling on my pant leg, listening as her high heels click on the hardwood floor of the foyer, and then go silent. She’s hesitating and I don’t blame her. She’d be smart to turn and run, but wrong as it is I find myself holding my breath, praying that she won’t leave. She quiets the storm inside of me and I’ll be damned if I understand it. She is as far as it gets from the submissive who I demand in my lovers—and perhaps that’s her appeal. A Master is supposed to protect his submissive and I simply don’t trust myself right now. I don’t know where that leaves me when control, my control, is what I’ve counted on keeping me and everyone around me safe.

Crystal steps around the corner of the short hallway, stopping just beyond the rounded archways, a shadow in the darkness that I’ve allowed to consume the room—the way my guilt consumes me. She’s a curvy silhouette in the dark room, but I can make out her pencil-cut skirt, her long blond hair draping her shoulders, the flickering light of the silenced television catching here and there on her pale, perfect skin.

“Hey,” she says softly, and her voice is electric, shocking my nerve endings.

“My kind,” she replies, crossing the room to stop in front of the coffee table. “The only kind I know how to give.”

It’s a typical Crystal answer. Direct. Uncensored. Honest. And damn it, I think that’s what draws me to her. The honesty. The absence of games that she won’t allow me to play, games I just don’t have the energy to give a damn about right now. We fall into silence, the air thickening between us, that current of awareness that’s always there sharper, edgier now. The television flickers behind her, casting her in a warm glow that guides my unapologetic downward skim over her slender hips to her stocking feet.